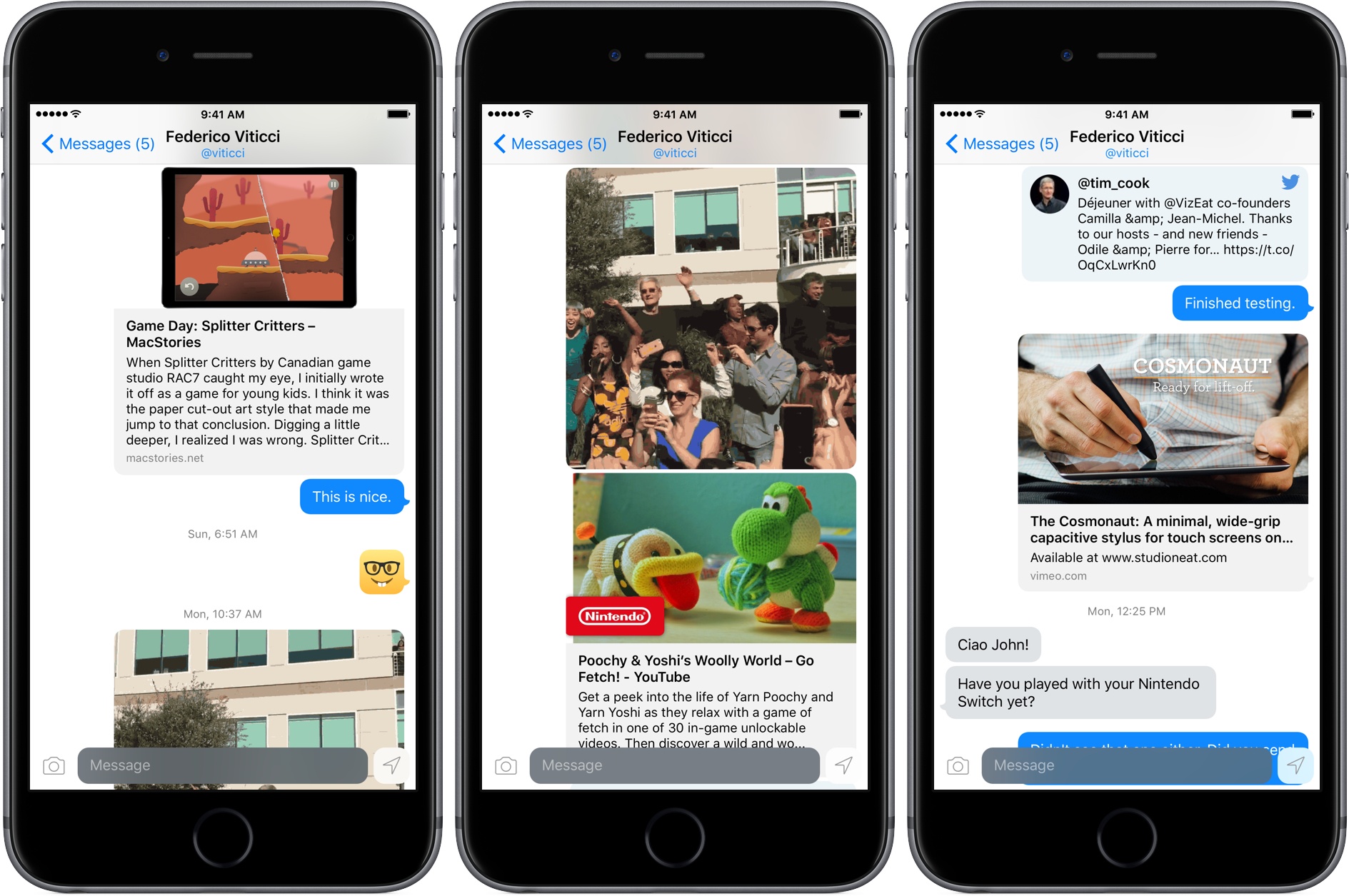 There’s a lot of friction involved in trying a new messaging service. Not only do you have to want to try the service, but you have to convince friends or family to try it too or you’ll have no one with whom to chat. That’s a significant disadvantage that TwIM sidesteps for anyone whose contacts are already on Twitter. What’s more, TwIM sets itself apart from the built-in direct messaging functionality of other Twitter clients with better content handling and support for the latest iOS features like Siri, interactive notifications, and 3D Touch. That gives TwIM a shot at appealing not only as a messaging app, but to anyone who wants a better direct messaging experience.

After granting access to your Twitter account, enabling notifications, and turning on Siri integration, TwIM presents you with a list of your direct message conversations similar to what you find in most Twitter clients. The plus button in the top right-hand corner of the screen opens a search screen for finding a user with whom to start a conversation. As you type, the results list narrows. People who follow you are indicated with an icon to the right of their name. 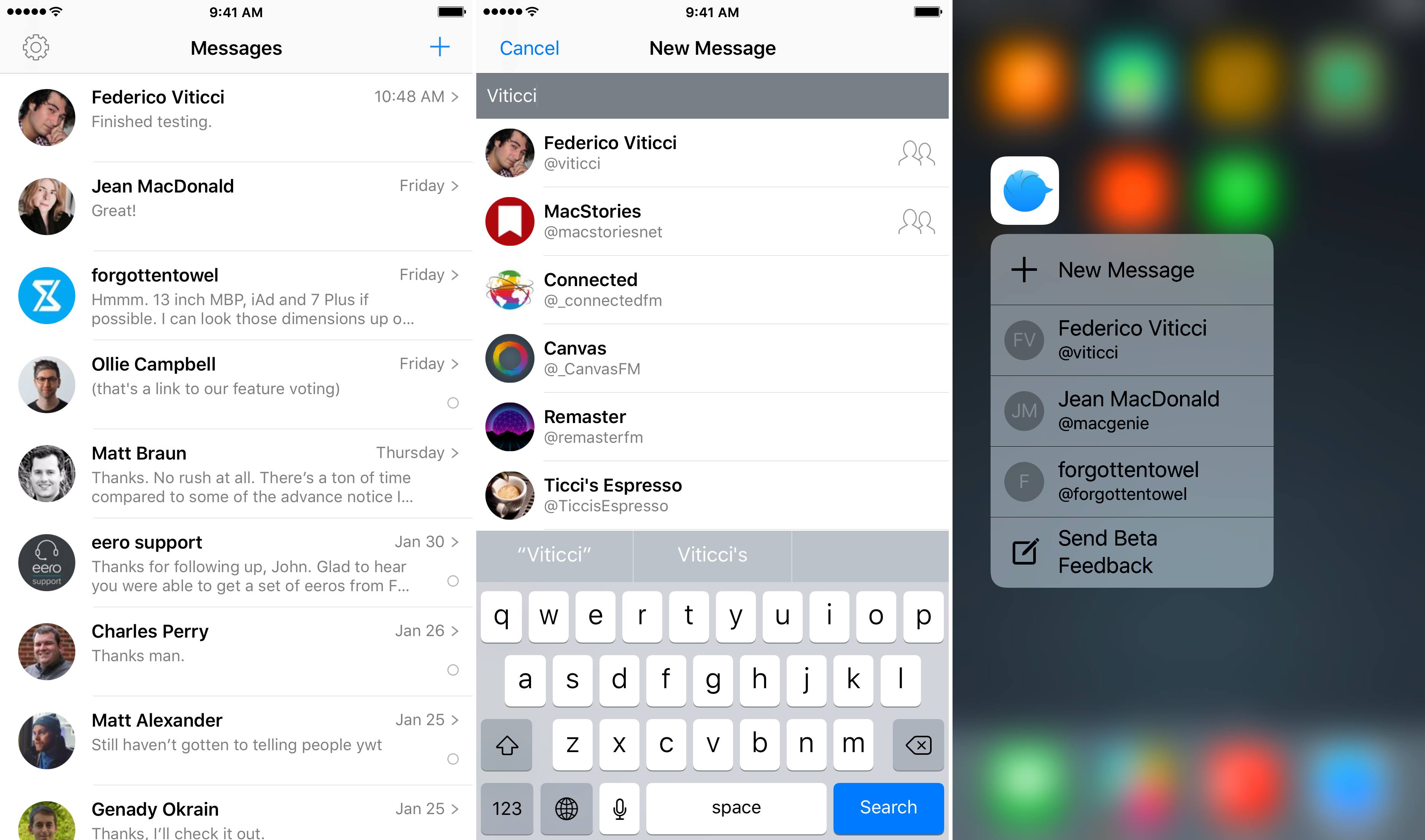 One of the ways TwIM shines is the way it handles embedding content in your conversations. Twitter and third-party clients each handle this differently, but on the whole, none of them give direct messages the same level of care and attention as the public feed. The situation is better than it used to be, but it leaves a lot to be desired compared to modern messaging apps. TwIM does a lot to fix that by using rich content previews throughout the app.

TwIM supports in-line photos that can be picked from thumbnails of your most recent pictures or your photo library. You can also take a picture from within TwIM. To add a GIF, just drop its URL into a conversation and TwIM will display an animated preview of it that can be opened full-screen.

Location sharing is not supported by Twitter, but by generating an Apple Maps URL, TwIM bypasses Twitter’s limitations displaying a thumbnail preview of your location directly within the conversation, which can be tapped to open Apple Maps to that location. Links to webpages are handled similarly with a thumbnail preview that includes an image and text snippet.

Another touch that gives TwIM a unique feel is that it converts the standard iOS smiley emoji into flat, squared versions. It’s a fun departure from standard system emoji but feels incomplete because the custom emoji are limited to smileys.

TwIM does a far better job than most Twitter clients of providing ways to interact with direct messages from outside its main app. One way TwIM accomplishes this is with a share extension that handles text, photos, and links. The extension opens a list of your recent conversations and a search box for finding other contacts. When you pick someone, it drops the text, photo, or link into the conversation, ready for you to hit Send without having to leave your current app.

TwIM also uses interactive notifications that make it easy to reply to a message from wherever you are on your iPhone. If you prefer, though, you can tap a button in the notification to be taken straight to that TwIM conversation.

I think my favorite TwIM feature, though, is its SiriKit integration. Simply say something like ‘Send a message to Federico with TwIM’ and Siri asks for your message and sends it as a direct message. This is something that other Twitter clients can’t do, including the official Twitter client, Tweetbot, and Twitterrific. 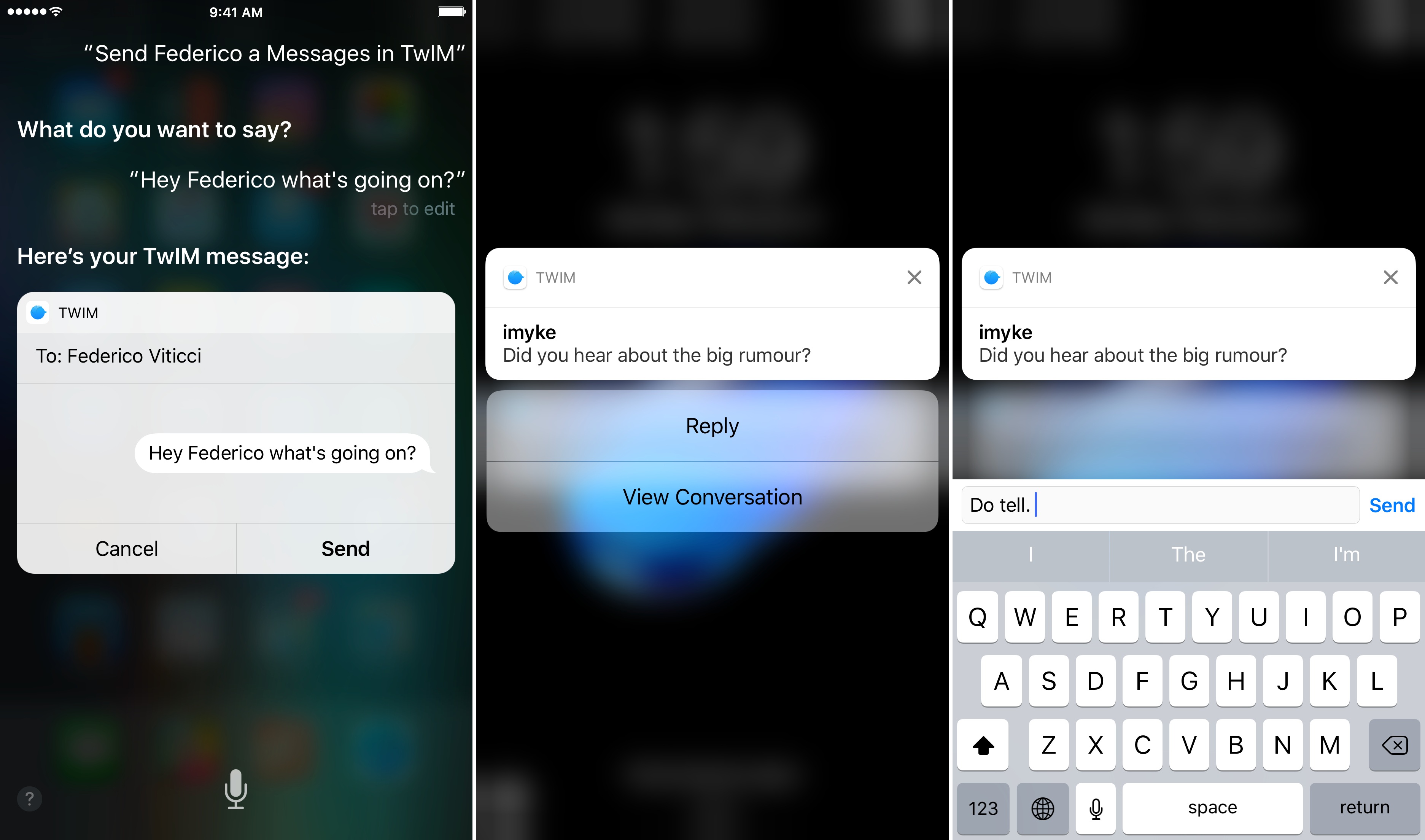 3D Touch is also featured throughout TwIM. Pressing the app’s icon lets you open the search view to start a new conversation or drop into one of your three most recent conversations. Once in TwIM, you can peek and pop message threads from the recent conversations screen or use the feature to preview photos or other content. Swiping up after peeking at content gives you the option to share it with the system share sheet or delete the message, though deleting only deletes items in TwIM, not on Twitter itself. Swiping up on a photo gives you the additional option to save it.

Most of my private messaging happens in Apple’s Messages app and Twitter direct messages. The Twitter clients I’ve used handle direct messages capably, but there’s something to be said for a single-purpose app to handle private conversations. It lets me dip into direct messages without getting distracted by my main Twitter feed or replies. Even better, I can send a direct message to someone from Siri if I think of it while I’m in the car and have my iPhone connected to CarPlay or walking to work in the morning and remember that I need to get back to someone.

Twitter has been shedding products rapidly in recent months, including its developer tool suite and Dashboard app. That’s not an environment in which I expect an official Twitter messaging app to be launched. Perhaps we are slowly returning to the days when third-party developers were relied on by Twitter to innovate on its platform instead of being stifled by onerous API limits that locked out newcomers. I hope so because apps like TwIM show how Twitter’s service can be leveraged to create something useful that Twitter itself doesn’t seem interested in doing.

TwIM is available on the App Store as a free download.