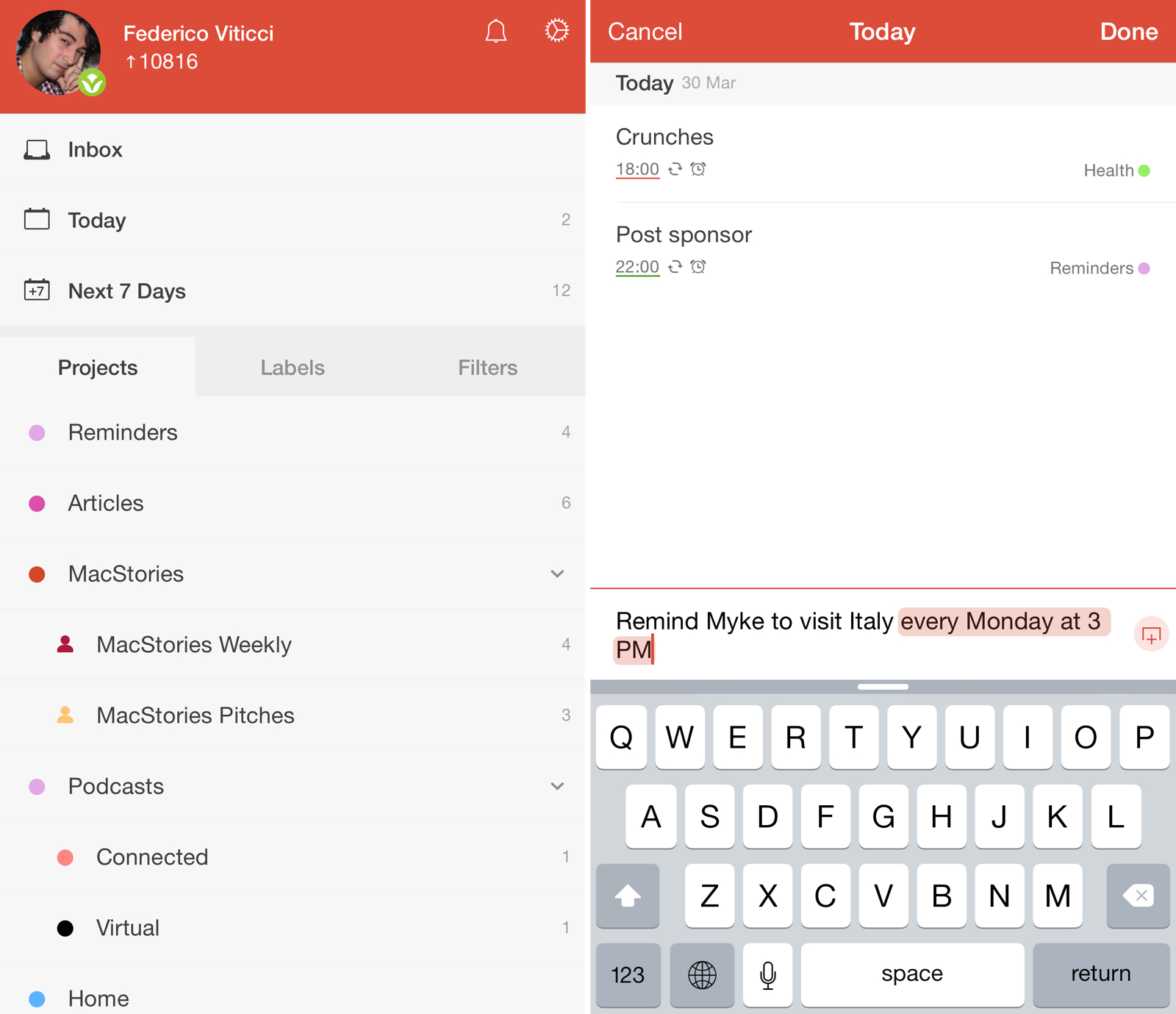 Last November, I wrote about my decision to switch from iCloud Reminders to Todoist as my task management app of choice. I concluded:

Todoist strikes a good balance of powerful features and clever implementation that doesn’t push me to customize everything all the time. I’m not writing scripts for task management, I’m not changing icons and themes – I set up a few filters and I’m just focusing on doing stuff. The Todoist app for iOS integrates well with iOS 8, and, overall, I’m thoroughly satisfied with my decision to switch from Reminders to a professional-grade todo system to manage my life.

Over the past five months, I’ve kept using Todoist every day and I’ve enjoyed its reliability and integration with other apps and services. Everything from my original review still stands: while I don’t rely on all of Todoist’s features, its flexibility allows me to scale my tasks and projects at any time. If a big new project comes in and I need to take care of it with my team and have a deeper visualization of my responsibilities, I know I can count on Todoist. If I have to jump from a couple of tasks each day to a few dozen, I can rest assured Todoist can do it.

In spite of my appreciation, though, I’ve been critical of Todoist’s iOS app before, and I’m happy to see the company addressing some of my major complaints in Todoist 10, launching today for iPhone and iPad.

I upgraded to a beta of Todoist 10 a few weeks ago, and, while it doesn’t profoundly change the capabilities of Todoist on iOS, the new version brings some powerful (and long-needed) functionality that will help users be more efficient and spend less time managing todos.

For me, the biggest frustration with Todoist on iOS was the friction it put on creating new tasks with attached details (date, time, notes) when compared to the ease of use of Fantastical. In hindsight, these two paragraphs were prescient:

More importantly, the biggest difference between natural language in Fantastical and Todoist is that you’re not typing in a single field and letting the app figure everything out on its own. In Todoist, you’ll need to tap in different fields to type a task name, date, project, label, and more, whereas Fantastical is able to parse fields from a single sentence. This made Fantastical faster and easier to use for me: I could launch the app, type everything in one go, and trust that the app would parse all the relevant fields.

It’s a bit unfair, though, to compare Fantastical and Todoist from this standpoint. Fantastical has been built for information stored in Reminders and Apple’s Calendar – it doesn’t deal with collaborators, file attachments, labels, or sub-tasks. The basics of natural language input are more elegant in Fantastical, but Todoist deals with more aspects of task management.

Before version 10, Todoist had a basic implementation of natural language that recognized simple commands such as “today at 10 am”, turning them into reminders and due dates. On an average day, that was fine as I generally only needed to create simple tasks with a set date and time; the system would show its weaknesses as soon as I tried to type out any recurring or complex date, which would make me long for Fantastical’s natural parser. I don’t like using the native iOS date and time picker to assign due dates, and yet Todoist was resorting to that default solution all too often.

Today, Todoist is introducing intelligent input, a technically impressive take on natural language input that supports a variety of date commands in 10 languages with over 100 rules and 300 normalizations per language. Intelligent Input is best used alongside quick add, another addition that helps getting new tasks in Todoist easily, foregoing the full-screen task creation UI in favor of a leaner, quicker typing experience.

Over the past few months, Todoist added a new button to the app to make it easier to create new tasks from any list screen. Available in the lower right corner of the app, the red “+” button was a nice shortcut – especially for the bigger iPhone 6 and iPhone 6 Plus given its placement in the UI – but it still launched the full task creation interface, which contained several menus and segmented controls. Those would slow me down when I needed to add a task in a couple of seconds.

With version 10, Todoist has reworked that button to open the quick add UI, a text field displayed on top of the keyboard to add new tasks to a list. With quick add, you can type a task, hit Return, and it’ll be saved, letting you type another task immediately. 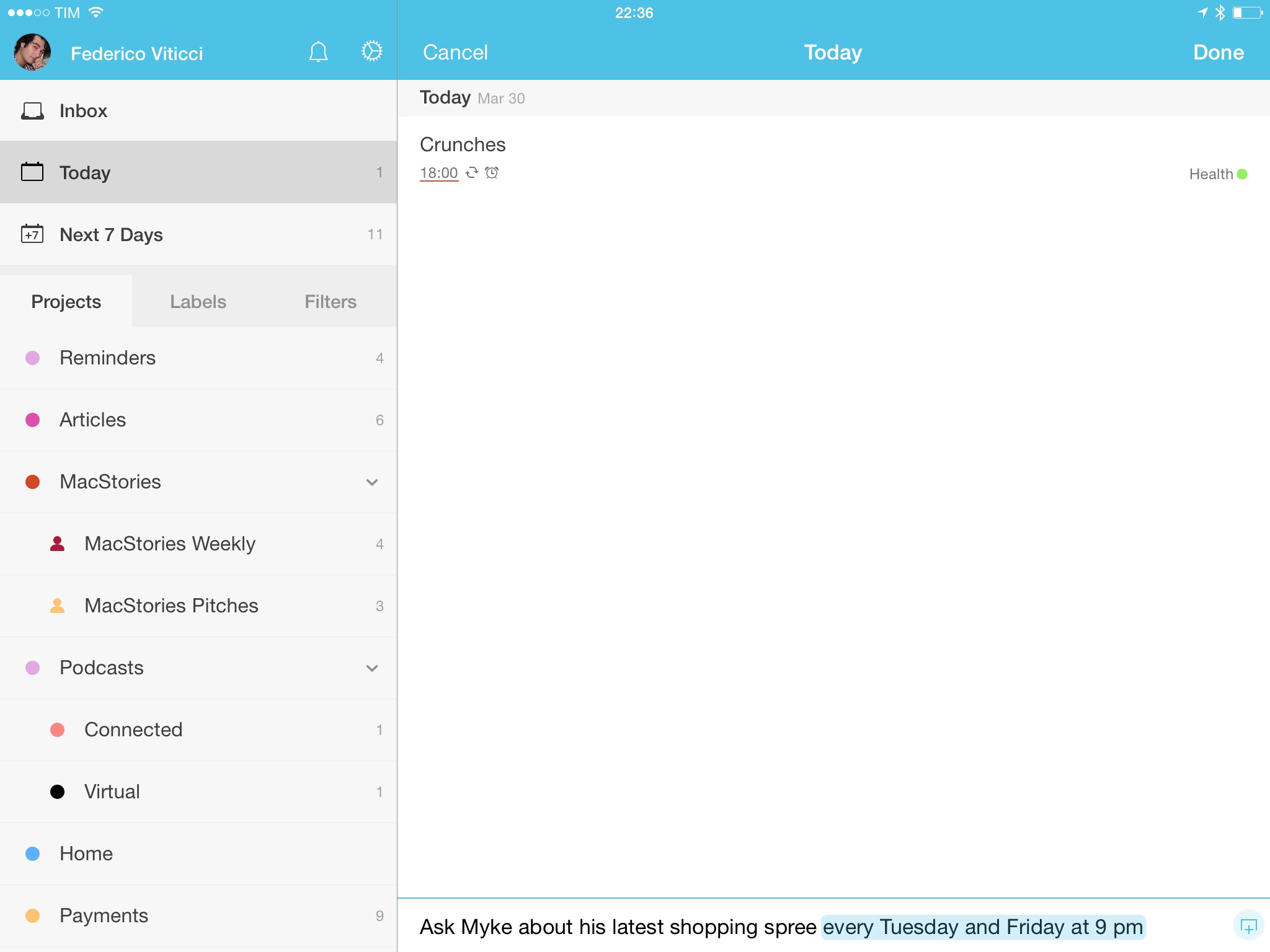 Quick add dramatically simplifies the process of adding several tasks in a row to Todoist, but its potential is only revealed in combination with intelligent input. In the text field, you can type any date/time string such as “on Tuesday at 5” or “every Thursday at 4 starting April 10” and it’ll be highlighted as you type, suggesting the fact that it’s being parsed by Todoist as a date. Once you’ve typed or dictated a task, tap Return so that the highlighted date will be omitted from the task’s title, and you’ll have a new task in your account with date and time interpreted from natural language.

The animation used to visualized parsed natural language isn’t as smooth or visually appealing as Fantastical’s, but intelligent input works, and it’s got an impressive selection of supported rules and languages at launch. Unlike Wunderlist (which recently added basic support for naturally-typed dates), Todoist 10 lets you add strings like “every day at 8 ending May 1”, “in two months”, or “for three weeks”.1 The Todoist team has done a good job in building support for relative dates and recurring tasks and, for most of my needs, intelligent input was able to parse my commands, saving me from having to set dates and recurrences with menus.

My main quibble is that, while a solid debut (again, especially considering multiple languages), intelligent input isn’t always as advanced as Fantastical’s natural language. The app can get confused when mixing times with start and end dates; there’s no support for time zone conversion2; and, repeating tasks aren’t visualized on a calendar, so you’ll have to guess how many repeats have been interpreted correctly.

Also, Todoist has enabled support for labels and priorities in intelligent input and quick add, but the same isn’t true for assigning tasks, setting projects, or attaching notes to a new task. I’d love the ability to assign a new task to a person directly from quick add, but intelligent input isn’t currently set up to handle that extra information.

Quick add and intelligent input are good additions to Todoist: adding tasks is easier, and setting most dates and times no longer requires tapping and scrolling menus. Intelligent input still isn’t as flexible or polished as Fantastical for date/time commands, and it could be improved to support a wider range of task metadata already available in Todoist. For now, though, Todoist has the best natural language support of any other project management app for iOS, which is already a notable accomplishment.

Todoist’s focus on speeding up task creation also applies to other interactions through the app, namely gestures and the ability to edit multiple tasks at once.

The latter is a particularly welcome change as I often wished I could select a group of tasks and make the same modifications across all of them. In Todoist 10, you can hit the More button in the upper right corner, tap “Edit multiple items”, and select multiple tasks by tapping them. Then, you’ll be able to complete all of them at once, reschedule them, or move/delete them. This is an obvious change in hindsight, but too many todo apps surprisingly get this wrong and require you to edit tasks individually. I’m glad that Todoist added this option, especially for projects shared with a team.

Gestures have also helped me interact with the app faster, avoiding the use of sub-views and menus. In Todoist 10, you can:

Not all of these gestures are immediately recognizable from the interface, but they can be useful once you get how they work. I recently went through a reorganization of our shared MacStories project, and indenting sub-projects with gestures was easy and quick.

Features aside, Todoist 10 sports a fresh coat of pixels as well. The entire app has been tweaked with redesigned icons and fewer text labels, but, more importantly, you can now choose from a selection of 10 colorful themes in the settings. 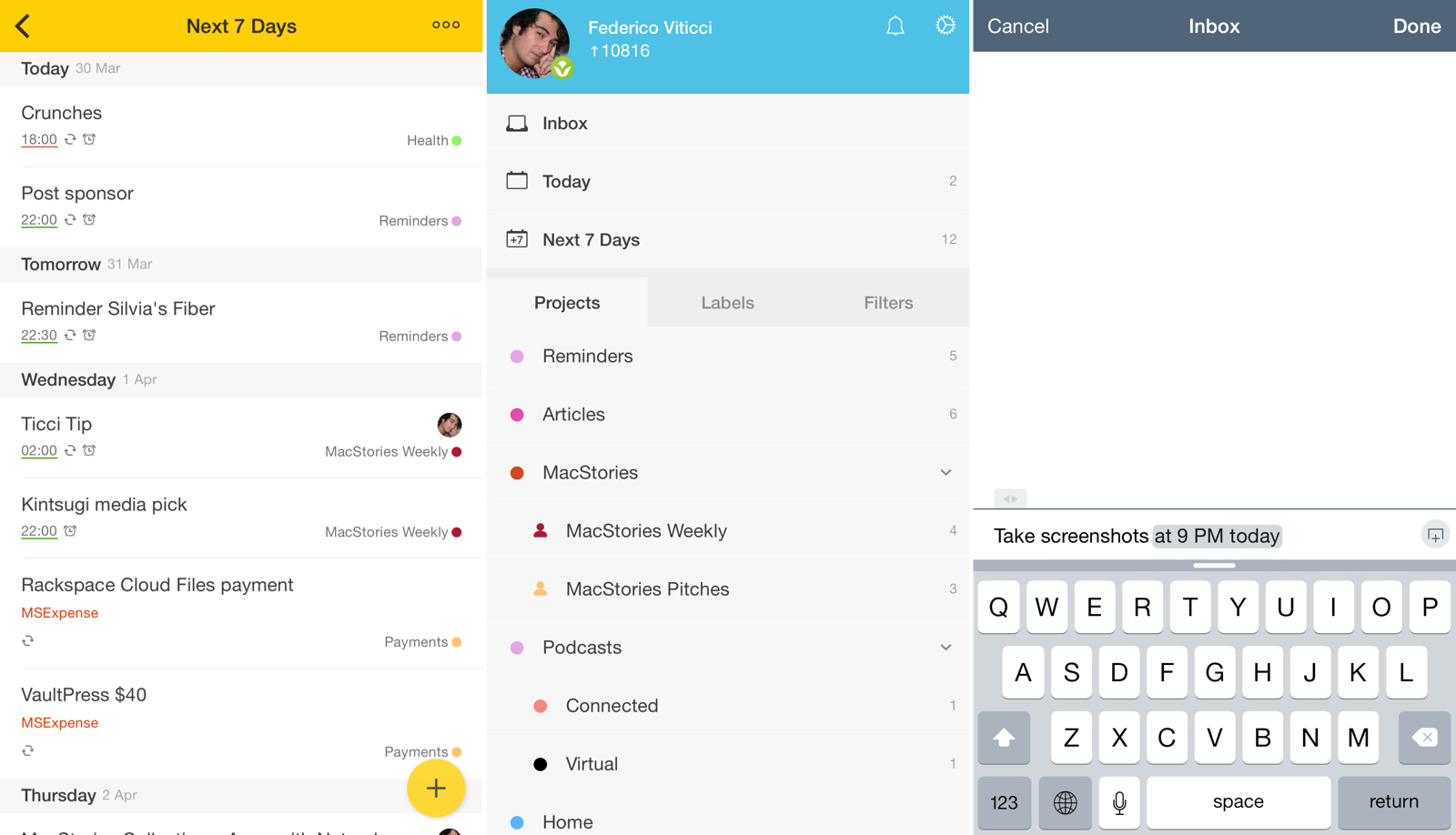 I’m not exactly a fan of themes in apps I use on a daily basis as I always tend to go with the default option due to the paralysis of choice, but I like Todoist’s colors. Sunflower and Sky are especially summer-y, and I wouldn’t mind these options in Todoist’s upcoming Apple Watch app.

Todoist 10 doesn’t have a list of hundreds of new features and changes, but the major additions it brings are laying the groundwork for the app’s next steps on iOS and Apple Watch. Intelligent input, gestures, and visual customization are going to be some of the app’s pillars going forward, and I believe Todoist has chosen the right functionalities to build upon.

Todoist is an extremely lean and focused company. In the months I’ve spent covering and using the app, I’ve noticed how they’ve resisted the urge to add options for the sake of feature parity with other services, always prioritizing the vision (and business model) they have for Todoist before anything else. Todoist may not be the prettiest or geekiest todo app out there, but it’s built with attention and care for what it’s supposed to accomplish. This focus permeates Todoist 10, which is a solid update that shows promising signs for the future.

Todoist 10 will be available today on the App Store.