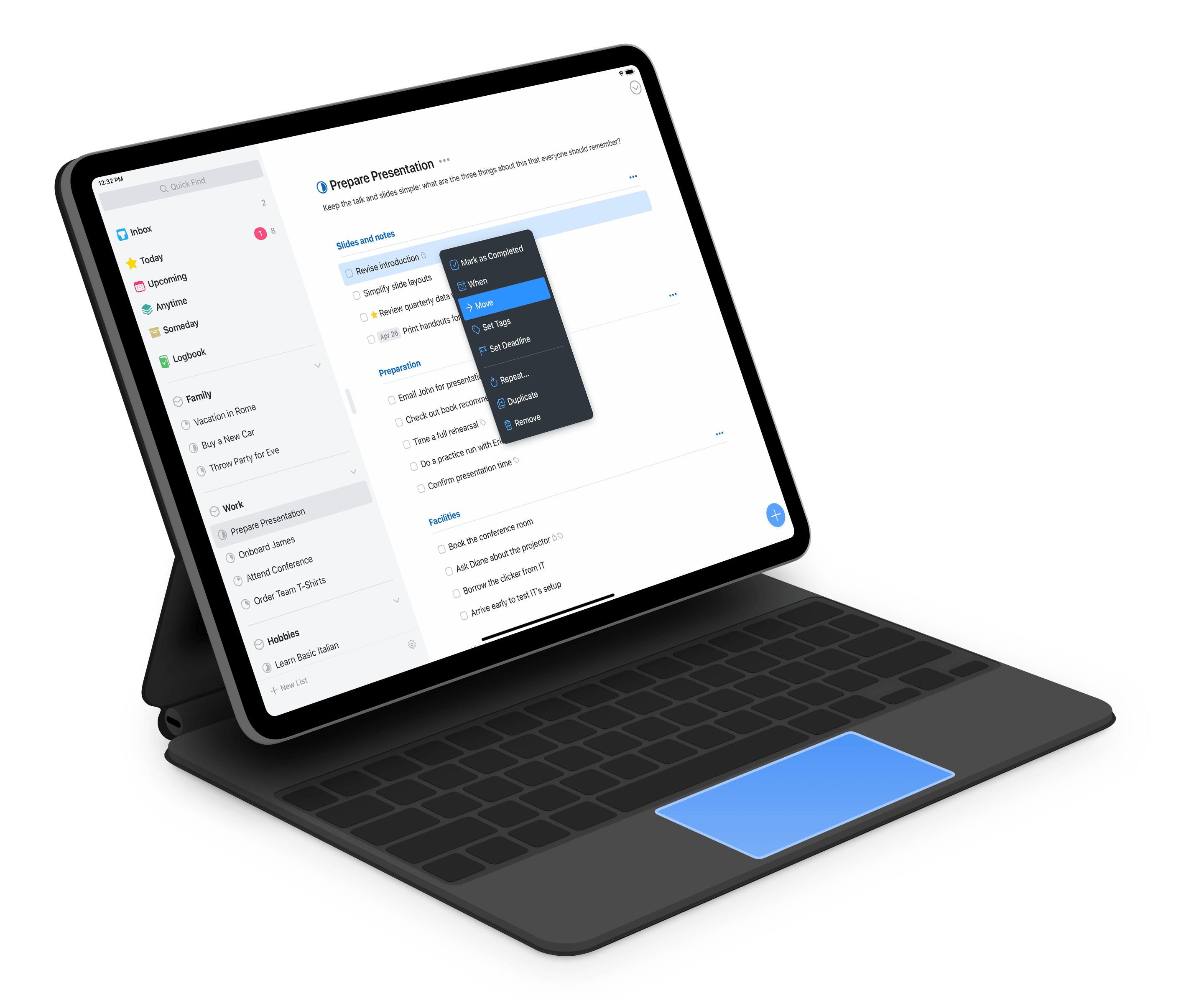 Today Things, the excellent task manager, was updated with enhanced support for the iPad’s new cursor just in time for the Magic Keyboard’s arrival. While you could use the iPadOS cursor in the app before, now all of the interface elements respond appropriately to it and key additions like context menus and special clicks make the experience complete.

The iPad’s cursor acts like a living, dynamic force, snapping to different parts of an app’s interface to indicate significance. For example, in Things if you’re simply hovering over a task’s name, the cursor will remain its default shape as a small circle, but if you move it near the checkbox next to a task, it will snap to that box and fill it to indicate what’s selected.

Things follows the example set by Apple of causing selected elements to grow in size in response to the cursor, giving the impression that they’re popping off the screen a little. In most Apple apps I’ve tried, this effect is fairly subtle, but I love how Things emphasizes it where appropriate. For example, when the cursor snaps to a task’s checkbox, or to the Magic Plus Button for creating new tasks, those elements jump forward in a fun, playful way. Their enlarged size has the added functional benefit of reflecting how, in order to de-select those elements, you’ll need to move the cursor slightly further away than you might with a traditional Mac cursor. 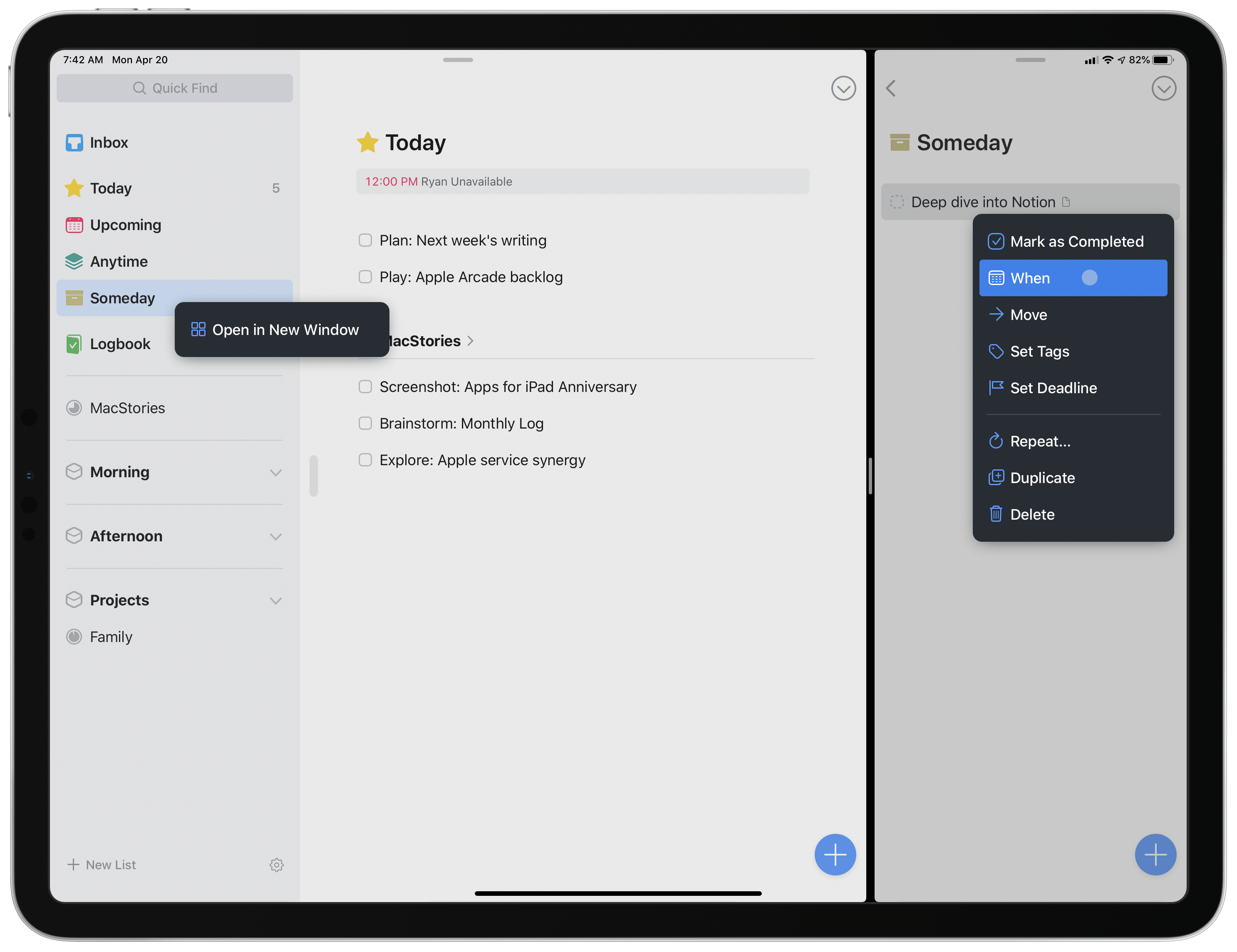 The team at Cultured Code has done more than just the basics with Things cursor controls. The app now features custom-designed context menus that are only accessible when using a connected trackpad or mouse. A right-click on any task, area, project, or other list in the sidebar will reveal these new context menus. Rather than following the standard design Apple introduced in iOS 13, Things’ menus reflect the app’s unique aesthetic. They offer shortcuts to important actions, such as scheduling or moving tasks, or opening lists in new windows. While I don’t understand why these menus are exclusive to mouse and trackpad use, rather than also being available via a long-press as context menus typically are, they’re a great addition nonetheless.1

Special clicks are another enhancement to using a pointing device in Things. In a move that should come as no surprise considering Things’ extensive keyboard support, Cultured Code has included a couple options that integrate keyboard and mouse or trackpad clicks. If you click a task while holding down the Command key, then rather than opening that task, it will be selected instead and you’ll enter multi-select mode. Or, if you want to cancel a task (a feature I forgot even existed), you can do that by holding down Option while you click the task’s checkbox.

The only additional trackpad enhancement I’d like to see in a future update is support for navigating back to the main menu via a two-finger swipe gesture. The app does support two-finger gestures for swiping over tasks to schedule them or enter multi-select mode, so adding a similar gesture for moving from a list view back to the main menu is a natural inclusion. You may not need it when working in full-screen, where Things can display both a list and the sidebar menu at once, but in multitasking setups like Split View or Slide Over, it would save having to manually move the cursor to the top-left corner where the back button lies, and would also offer greater consistency with other apps like Apple’s Reminders and Files.

That small request aside, Cultured Code has given Things an excellent complement to its first-in-class keyboard support. The cursor implementation is thoughtful and the enhancements of custom context menus and special clicks are exactly the kind of power user features I would expect from one of the best task managers on Apple platforms.

Things for iPad is available on the App Store.