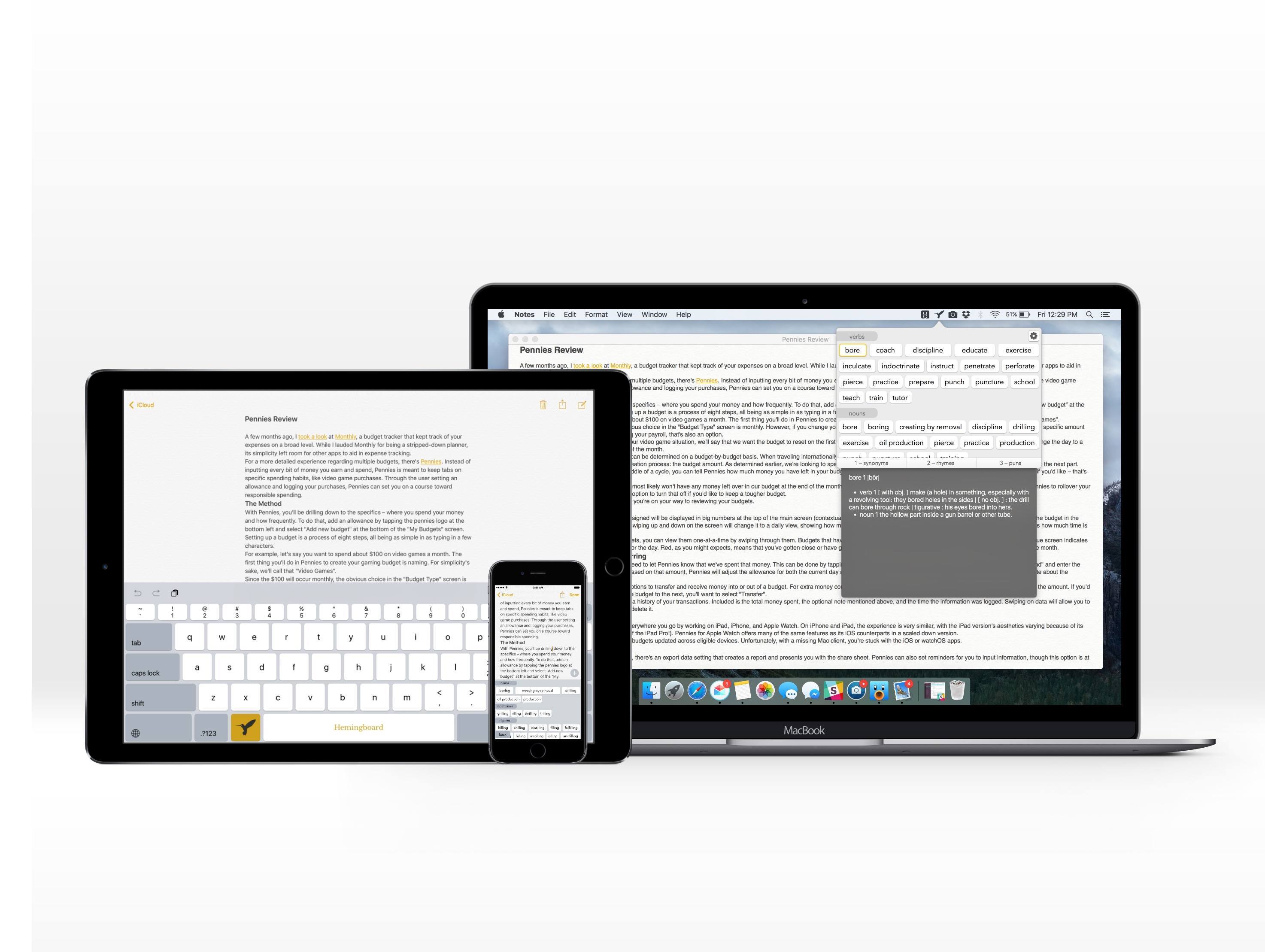 Hemingboard is the kind of app that will inevitably invoke a “Back in my day…” response. Created by the adorably-named Puppy Ventures, Hemingboard is an in-line digital thesaurus in the form of an add-on to the iOS stock keyboard or a keyboard shortcut on the Mac.

But the app is more than that – it’s actually a resource for improving your writing. In addition to providing synonyms to spice up your copy, it also gives suggestions for rhymes and puns. By providing an experience that doesn’t require you to stop what your writing, Hemingboard is able to make its impact directly – and do a phenomenal job at it. 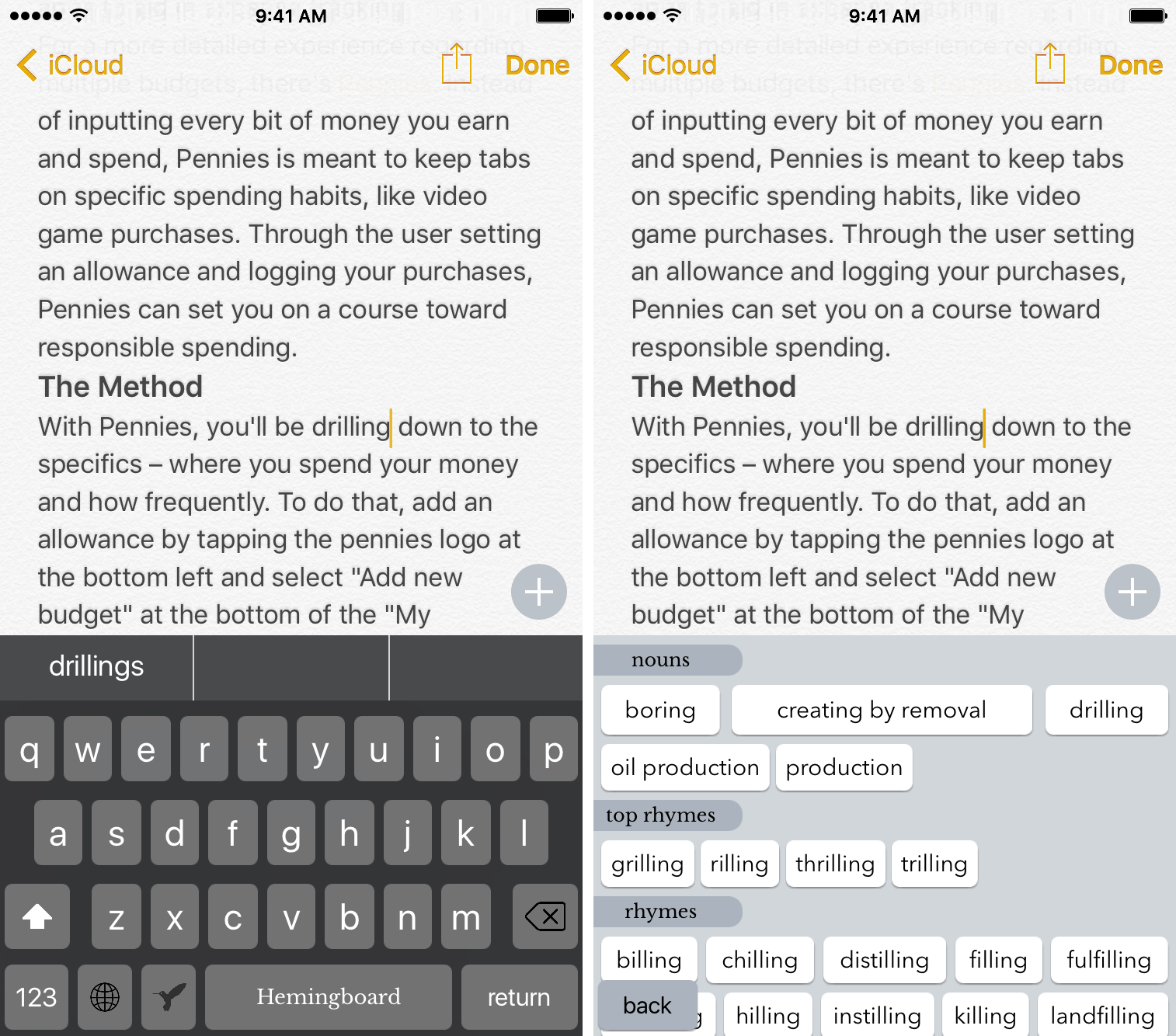 Hemingboard, although quite a minimal one, is still a third-party keyboard, so be warned: by no fault of its own, it can sometimes experience crashes and hiccups. If you’re someone who uses keyboards like Gboard or SwiftKey, you’re used to these issues; however, first-time users of third-party keyboards should anticipate problems now and again.

Hemingboard’s design matches the layout of the stock keyboard on both iPhone and iPad with only one exception: an added button at the bottom left. This is the “app” that you’ll spend your $2.99 on, a button that will be, for the most part, untouched.

However, when you do choose to call upon Heminboard’s services, you’ll find a service that you’ll want to come back to again and again for writing advice.

After you type a word or place your cursor after or within a word, tapping on the icon will display a selection of synonyms, rhymes, and potential puns. On almost every occasion, that was the order of the word placement, although you may see the noun category split into different parts of speech.

If you see a word you like, select it and it will replace the term you had previously written. Tapping and holding on the word will bring up its definition, a handy gesture that enables a better understanding of the results.

From my usage of Hemingboard, I’ve found that it really excels in providing great synonym suggestions. With rhymes, the process gets slowed to a grind; to best take advantage of its features, you’ll have to stop writing, go back to the word you’d like to rhyme with, and then type that word out where you previously left off. Puns, on the other hand, suffer the fate of not knowing the context of the situation – Hemingboard just tries to offer possibilities for a play-on words without knowing the whole phrase.

Rather than going into Hemingboard’s app itself to change any features, you can customize its functionality by holding on the globe icon next to the hummingbird. I’ll highlight two that you’ll definitely want to check out: dark theme and rearranging.

As you might expect, Hemingboard’s dark theme is a black background with gray and white keys along with a dark gray QuickType bar. It looks fantastic, a look akin to the random dark theme keyboard iOS that pops up every so often. Unfortunately, the suggestions do not retain the same affect, a change I’d like to see in coming versions.

Although I get to use the synonym suggestions the most, your usage my vary. Because of that, Hemingboard allows you to rearrange the order of the synonyms, rhymes, and puns to best suit your needs.

On the Mac, Hemingboard lives in two locations: the menu bar and a keyboard shortcut. Because there’s no third-party software keyboards to worry about, Hemingboard is a breeze to use on the Mac.

When you’re writing your content, you can either click on the icon in the toolbar or use command-shift-H to use Hemingboard’s core features mentioned in the iOS section. Hemingboard will once again detect your cursor’s location and offer relevant words to improve what you’ve written.

Because of the Mac’s screen real estate, Hemingboard will provide you the definition without further actions from the user. Switching between the three categories of suggestions is much easier as well – simply use the 1, 2, and 3 keys to navigate.

If you’d like to change the hotkey that invokes Hemingboard, you can do so by tapping the icon in the toolbar and tapping the settings icon at the top right.

As an app, Hemingboard does exactly what it sets out to do; however, each product on the two platforms suffers from an issue. On iOS, its Apple’s continuous botching of third-party keyboards. On the Mac, Hemingboard is nowhere to be found on the Mac App Store, limiting its reach.

Despite these problems, Hemingboard stands out as a tool that everyone can benefit from. It offers opportunities for convenient and accurate word replacements, pushing it into a must-have for writers, students, and anyone looking to break from the same phrases and into more creative writing.