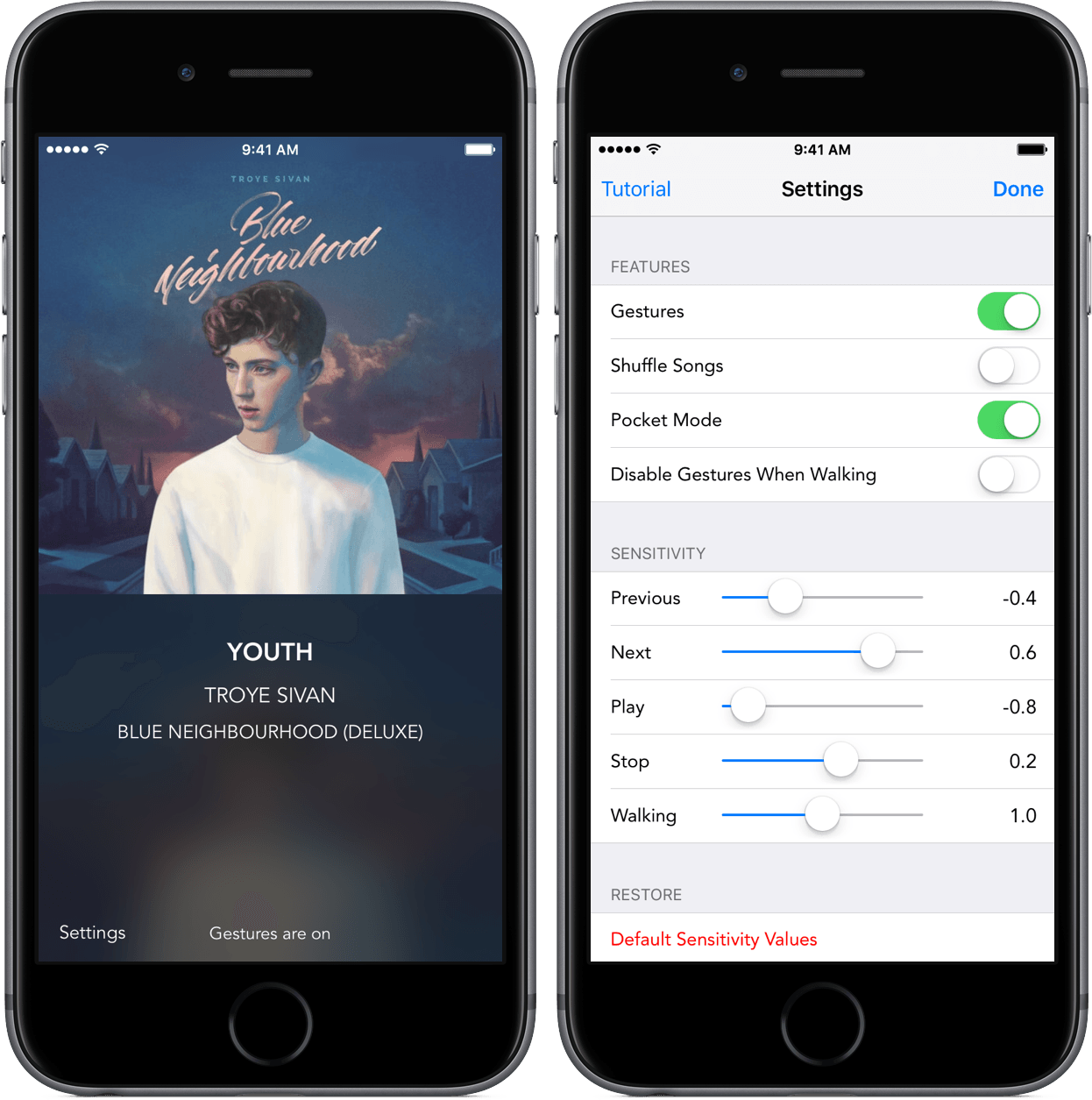 My phone sat locked when “Clarity” by Zedd played through my headphones. But like on so many other occasions, I decided that I was done listening to the song far before its end. I picked up my phone and, with a quick flick to the right, moved to the next song.

The functionality comes from Swysh, a $0.99 app to completely alter the way you interact with your music. I’ve been listening to my music with Swysh for the past week, and what I’ve found leaves me satisfied, albeit with some caveats. 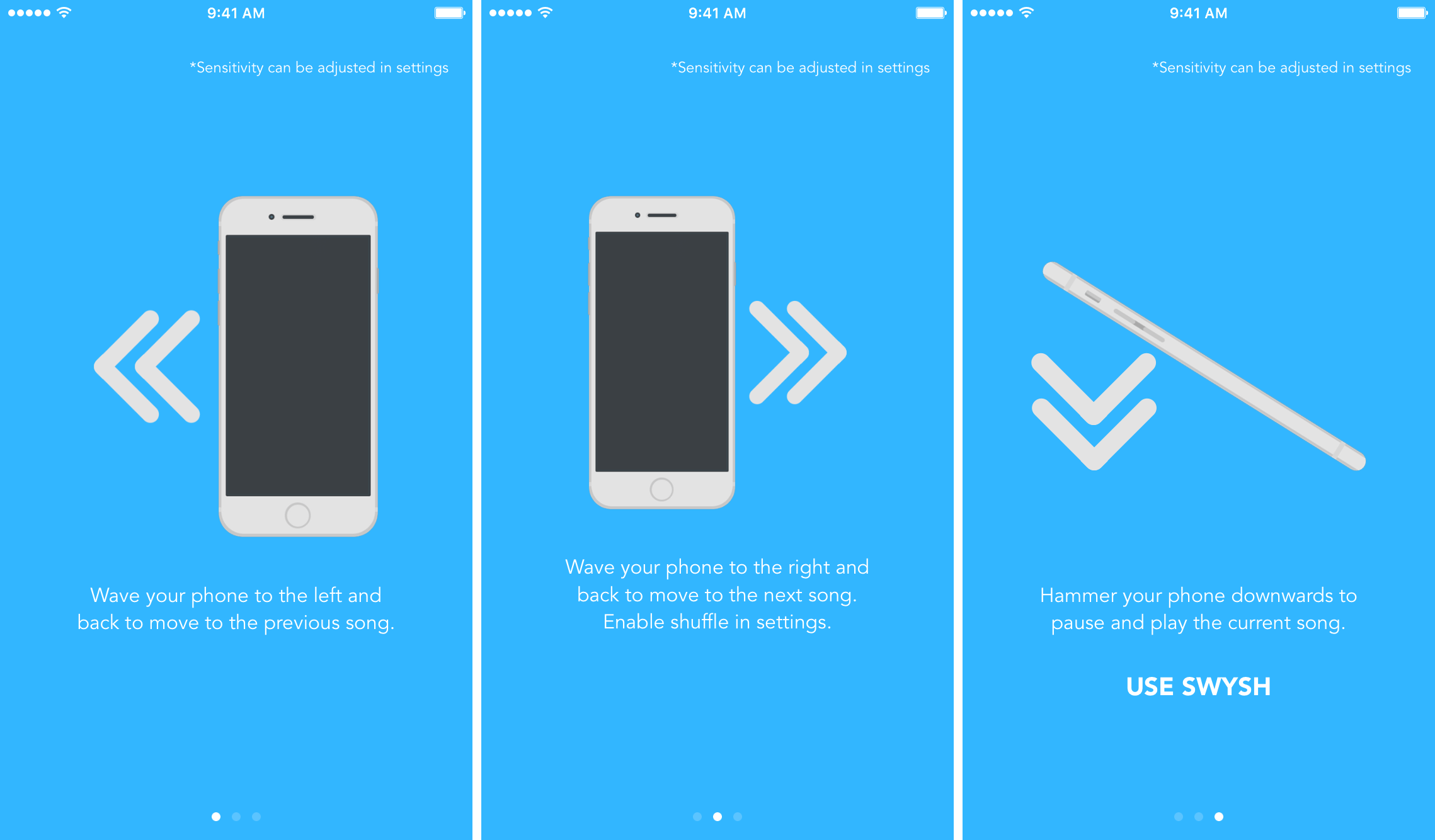 Once you download Swysh, you’ll be presented with a three-part tutorial. Within these screens, the app will run you through the key things you need to know. Essentially, you should familiarize yourself with three gestures: move the phone right to skip to the next song, move the phone left to go the previous song, and flick the phone down to pause.

After you’ve gotten the hang of this, you can close the app and use the gestures whenever you’d like. Swysh reads your movements via location services whether your phone is locked or unlocked, so don’t worry about keeping the app in the foreground. For most of my usage of Swysh, I simply left the app running in the background while I changed music in Apple Music.

That’s something to remember, by the way: Swysh only works with Apple Music for now. The developer, Lychee Labs, says that more integrations are coming soon, so hold tight if you have a subscription with another service.

To tune the experience, Swysh offers a multitude of sensitivity settings, configurable via sliders. When adjusting these, you’ll probably need to spend time comparing their values; what I’ve found is that it’s hard to distinguish between high and low sensitivity. However, my best experience with Swysh was just using the default sensitivity values.

There are also options to disable gestures, a feature that you’ll only want to use if you’re done using the app. You can toggle shuffling, as well as gestures while walking and a pocket mode. Swysh offers an action extension to toggle shuffling and gestures as well.

How Well Does it Work?

I’d like to say that Swysh works every time I try to use it – but frankly, that’s not the case. There were times where it took multiple attempts to skip forward or backward, and forcefully hammering down on my phone was often the best way to pause my music. Adjusting the sensitivity didn’t do a lot for me, though that may vary based on how you perform the gestures. Swysh also worked much better in my right hand than in my left.

That’s not to say Swysh doesn’t work, though, and the impressive thing is that it works at all. Although it struggles to receive inputs on occasion, knowing how and when it receives input made for a solid overall experience. By spending time with it, I was able to get my rate of success up fairly high. Even with the risk of occasional failure, I found the gesture support to be vastly superior to waking the phone and controlling the music from the Lock screen or Control Center.

Swysh, currently in version 1.0, shows its infancy at times; however, what it’s able to do for $0.99 is justifiable. With time and an Apple Music subscription, you can get an idea of what controlling music via gestures might be like – and, spoiler alert, it’s unexpectedly fun.