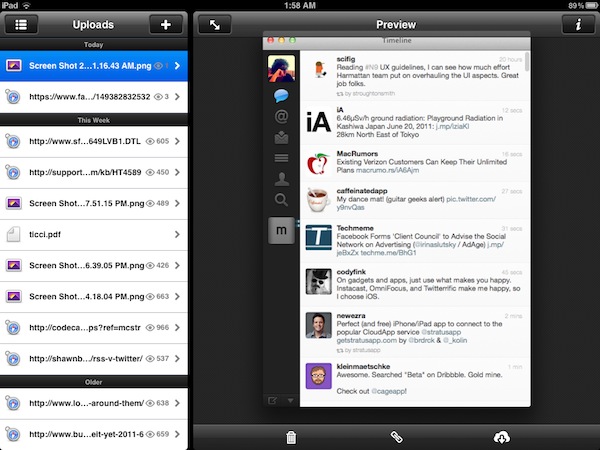 CloudApp, the service I use on a daily basis to share links with my Twitter friends and files with my co-workers, never had a unified experience for the iPhone and iPad. Launched as a Mac-only desktop utility with an online interface to browse and manage your uploads, CloudApp later gained much needed functionalities like real-time streams for uploads and view counts, as well as custom domains for Pro users, and a redesigned web app with more options for downloads, inline viewing, and file sharing. Overall, I think CloudApp is the easiest and most powerful way to share items on the web, and manage what you’ve shared from a great-looking web counterpart. The Mac app has also been updated recently to include a flexible plugin architecture, more keyboard shortcuts, and live updating results in the menubar. But as far as iOS goes, and especially the iPad, CloudApp has never seen a huge adoption from developers.

On the iPhone, however, there was a nice surprise called Cloud2go that impressed me since its first release for the solid feature set, elegant interface, and overall nice implementation of CloudApp’s basic functionalities like clipboard integration and uploads. The app was updated a few months ago to include the aforementioned live streams, as well as a slew of other improvements that have undoubtedly turned Cloud2go into the CloudApp client to have on the iPhone. But it didn’t have an iPad version.

Today, developers Jeff Broderick and Kolin Krewinkel have released Stratus, a free CloudApp client for iPhone and iPad that I’ve been testing over the past months and it’s become my go-to app when it comes to uploading and sharing links with CloudApp, as well as managing what’s already in my account. 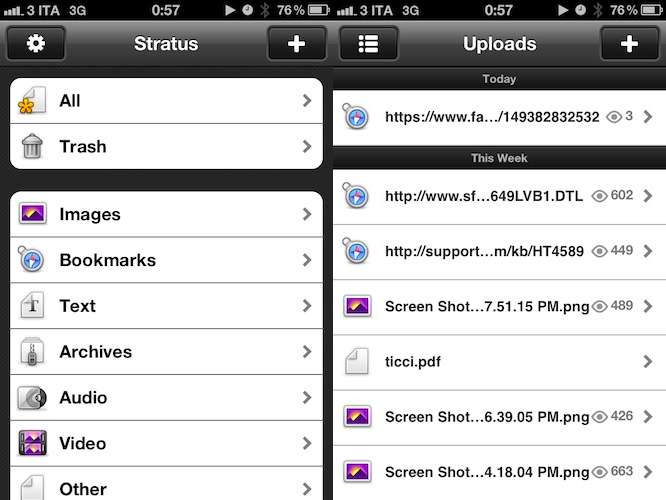 Stratus has a beautiful interface design. The UI is very custom and comes with several elements not taken straight out of Apple’s HIG, but the ones redesigned by Broderick are elegant, colorful, and more importantly help you understanding what’s going on and what kind of files you’re interacting with. Bookmarks, images, documents, videos, archives – all file types have their own custom icon, which is also implemented in the main account list, where you can browse “all items”, the trash, and filter by type depending on what you need to find – example, “Audio” and “Text” tabs. The interface is dark, it’s got toolbar buttons that are generally more rounded than Apple’s default ones and, on the iPad, the developers have made sure you can hide the landscape sidebar by hitting a “fullscreen button” in the upper left corner of the document preview pane. The same panel features an info button to see additional details about a file and, again, a bigger custom icon designed to indicate what kind of file type you’re playing with. As a side note, I’ve noticed the app works already well on iOS 5 beta, though it’s a little more crashy on my iPad 2 than the iPhone 4 (obviously, this app hasn’t been optimized for iOS 5 yet so you should run it on iOS 4.3.3).

Shiny design aside, what’s great about Stratus is that it supports stuff like real-time uploads, view counts, deleting options, and inline webpage previews. This means a) you’ll be able to read your bookmarks without leaving Stratus (but it’d nice to have an Instapaper button) and b) any change that happens on your CloudApp account on any device will be pushed instantly to Stratus. For instance, to try this feature, I uploaded an image from my Mac, and saw it appearing in less than a second on Stratus after the upload was complete; then, I asked my colleague Cody to view the link, and Stratus updated the view count from 0 to 1 in real time; last, I deleted the file from Stratus on my iPhone, and it disappeared on the iPad, Mac and web at the same time. This push technology is really, really great and it works well across platforms and apps.

As for what you can do in Stratus, the feature set doesn’t disappoint either: you can delete files with a swipe or by hitting the trash icon, and copy links to your iOS clipboard; you can download images, and upload new media from your camera roll (as well as shoot new pics using your device’s camera); the list of uploads can be scrolled as long as you want, given how the app loads past entries automatically as you scroll. You can’t select multiple items at once for deletion, and that’s something I wish the developers will fix in a future release. I also wish there was the possibility of paying for this software, as it deserves attention and free is always problematic in the long term. Perhaps a future update will let you unlock more features for a price – but I can’t confirm this (though I’d love to see things like thumbnail view, or automatic URL recognition from the clipboard). 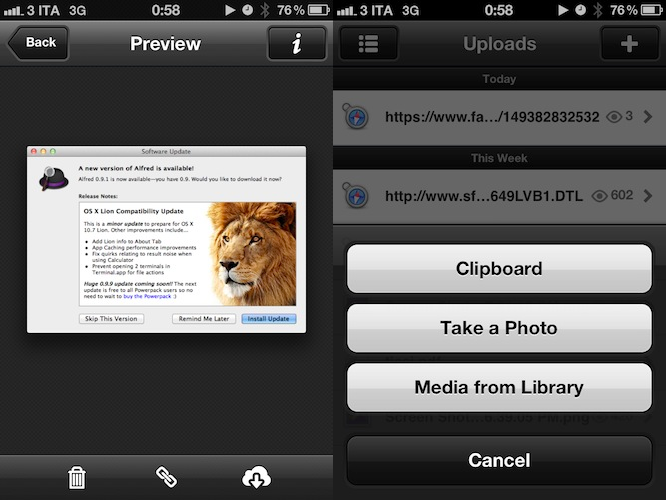 When comparing Stratus to Cloud2go for iPhone, I’ve noticed Stratus doesn’t let you rename uploads, open links in Safari and forward items via email, but these are options I’ve never missed during my beta testing period. Plus, the fact that Stratus comes as a universal app with native iPad support is an important addition that Cloud2go can’t list in its iTunes page. Furthermore, whilst Cloud2go lets you adjust image and video quality for uploads, Stratus can change CloudApp’s privacy for URLs (long Vs. short links) in the Settings.

Stratus isn’t perfect, but it comes with powerful features like live streams and filter-by-type, and it’s got a stunning design that looks great both on the iPhone 4’s Retina Display and the iPad’s screen. If you’ve been looking for a clean, universal CloudApp client that works on all iOS devices, Stratus is available now for free on the App Store.