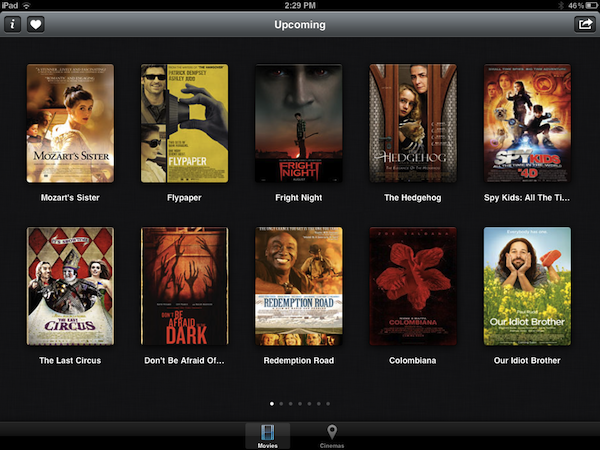 With the iTunes Store and Apple’s Trailers website, there’s no denying Apple has come up with a sweet combination to check out upcoming movies, and purchase or rent with one click those made available by movie studios after they’ve hit the box office. However, if you’ve been looking for a way to stay on top of new films and DVD releases directly from your iPhone or iPad, Trailrs is a new app developed by Andy Smart (the same guy behind Sociable for iPhone) that tightly integrates movie information and YouTube videos inside an app capable of sending you push notifications for your favorite movies, and more.

Trailrs is available as a universal app both on the iPhone and iPad, and it’s powered by a clean user interface design based on thumbnails for movie posters laid out on a classic linen background that’s everywhere on iOS devices nowadays. Trailrs allows you to check out trailers for “now showing” movies, upcoming releases (example: The Dark Knight Rises, coming out in 2012) and films now available on DVD. A button in the upper right corner lets you switch between these three different categories, whilst a “heart” icon on the left aggregates the movies you’ve marked as favorite – items you’re interested in, and that the app will save in its library to send you a push notification the day before they’re released in theaters. Furthermore, an Info button next to Favorites contains options to activate Facebook login (if you want to share a movie on your Wall), turn off notifications, and change your country from USA to UK, Spain, Japan, France, or Germany. The app will attempt to collect movie releases from these countries, replacing them with US data if not available.

As for the quality and availability of the trailers, the app doesn’t have the same huge catalog of Apple Trailers and there’s no way to switch between standard and high definition, as the app simply tries to fetch the most relevant video from YouTube, which when displayed natively on iOS doesn’t have controls to switch between 360p, 480p, 720p, and 1080p. Quality is fine in most cases, but I wish there were some options to enlarge the movie posters, and have multiple trailers like on Apple’s website (which, by the way, works well on iOS devices). I like the fact that you can look up each movie on IMDB and forward trailers to the iOS YouTube app – this is a workaround to see related videos, and thus additional trailers. Scrolling between pages in the main screen is smooth, and a second tab in the bottom toolbar allows you to geo-locate nearby cinemas to open in Maps and get directions. 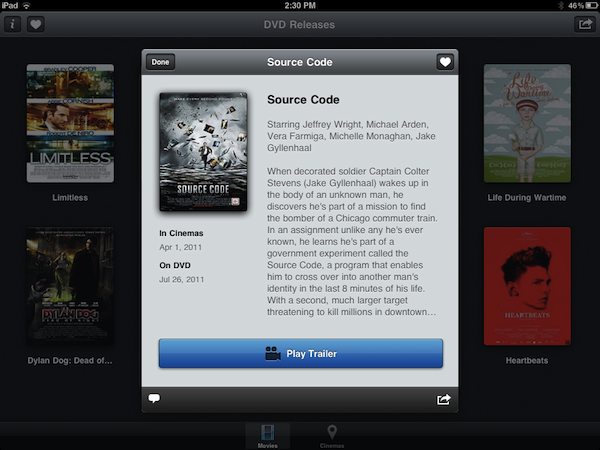 At $1.99 on the App Store, Trailrs is a great-looking alternative to Apple’s Movie Trailers, perhaps with less content but with the possibility of getting push notifications for the movies you’re looking forward to and an intriguing UI. Go download the app here.