I’m not normally a fan of finance apps. They tend to be more work than I want to bother with, and are often riddled with poor design choices that make them a pain to use. Not so Spend Stack, the finance-centered list app that I first wrote about last fall. Spend Stack looks and feels thoroughly modern, with an elegant design and deep support for modern technologies like iPad multiwindow, iCloud collaboration, and more. It enables creating lists of items that have monetary values and having the sum cost or value automatically calculated, making it ideal for budgets, shopping lists, vacation planning, and more.

Version 1.2 of Spend Stack recently debuted, introducing a strong set of new features and enhancements: Apple Card monthly statements can now be imported seamlessly, working with multiple currencies and recurring costs is now possible, the iPad app has gotten even better, and there are some nice new design touches. Let’s dive in.

If you’re an Apple Card user, though the Wallet app offers a great UI for browsing your past statements, there can still be value in exporting those records to another app. Keeping all financial records in one app, for example, or searching your past purchases, which the Wallet app can’t do.

Spend Stack now supports quick and easy importing of Apple Card statements. First you’ll need to go through the export process inside Wallet by visiting Card Balance, finding the month’s statement you want to export, then hitting Export Transactions. You’ll want to choose CSV as the export format, then save the new document to Files, where you’ll be able to grab it from Spend Stack.

Inside Spend Stack, there’s a new credit card glyph at the bottom of the screen inside each list, which you can tap to open a Files picker and select the file to import.

After your Apple Card statement is imported, which takes just a few seconds, you’ll notice that transactions are automatically tagged and sorted according to the categories used by Wallet. As you can see in the top-right screenshot above, Spend Stack uses subheadings and colors for each tag to visually offset them. If you tap on an individual item, you’ll find the address of the business associated with the charge in the Notes section. And as I mentioned already, one of the greatest benefits I’ve found to storing statements in Spend Stack is that they all become searchable.

Another reason Spend Stack could be a great place to store statements is if you want to share them with a partner. Currently Apple Card doesn’t enable easy sharing of transaction histories with people in your life you share resources with, but since Spend Stack utilizes iCloud collaboration features, after importing your Apple Card transactions you can share your Spend Stack list with a partner, giving them full access to your financial activity. 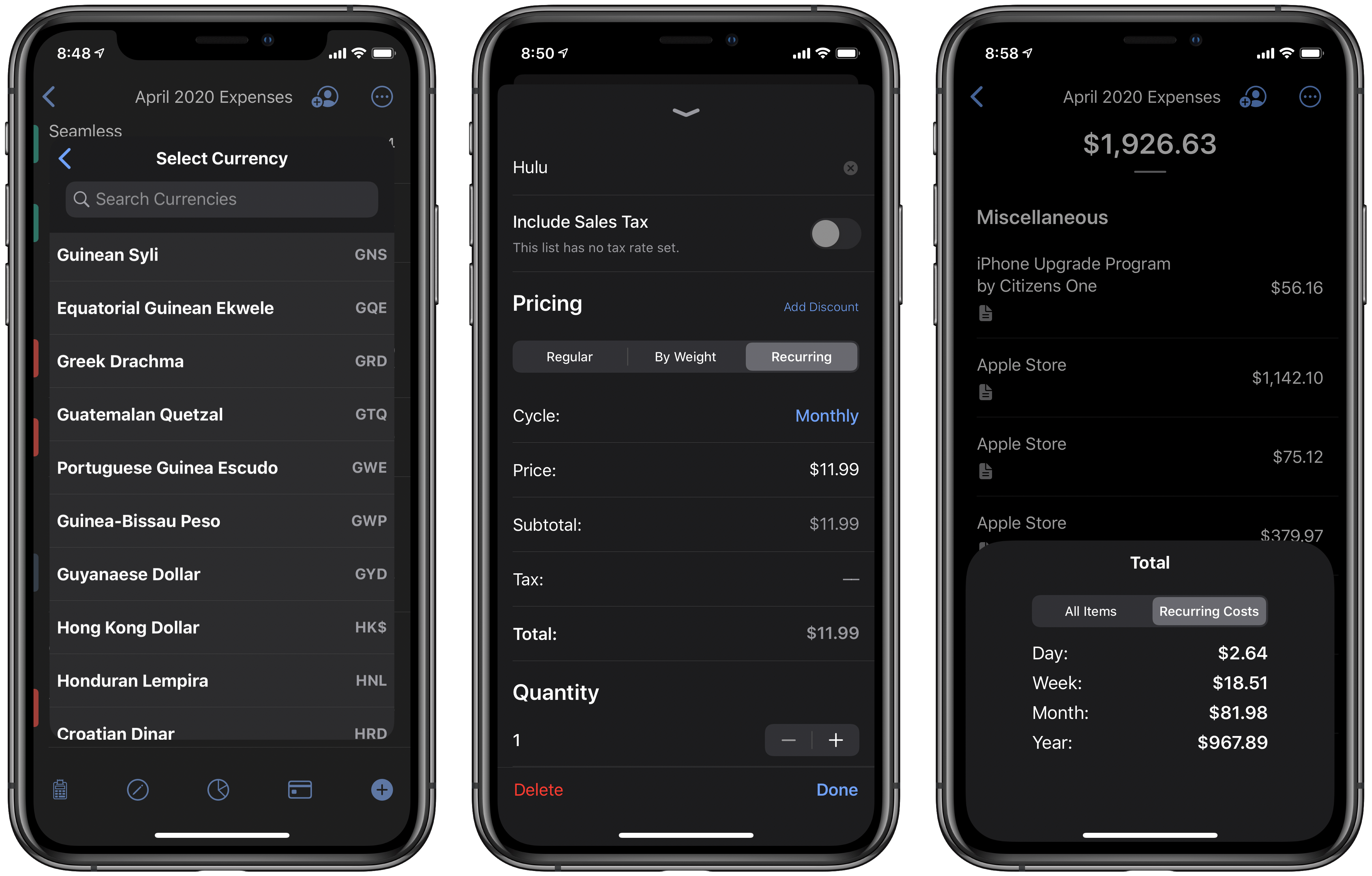 Version 1.2 also adds a couple of key monetary options that unlock new possibilities in the app. If you ever work with multiple currencies, Spend Stack now enables using different currencies for different lists, so you can have one list that tracks US dollars while another contains euros, for example. Previously the app could only use a single currency and it wasn’t user-configurable, but rather determined by your device’s language and region settings. Per-list currencies grant a lot more flexibility and utility than before.

Another new financial option is setting recurring costs for items. Opening an item’s detail view, then choosing the Recurring option under Pricing lets you set the exact cycle of the charge. After you’ve done this, tapping the sum icon in the bottom-left corner of the list presents a new view option: a Recurring Costs total which breaks all cyclical costs into daily, weekly, monthly, and yearly values. I’ve found it really helpful seeing these different breakdowns of my recurring costs when budgeting, as it enables a better understanding of both short-term and long-term expenses. 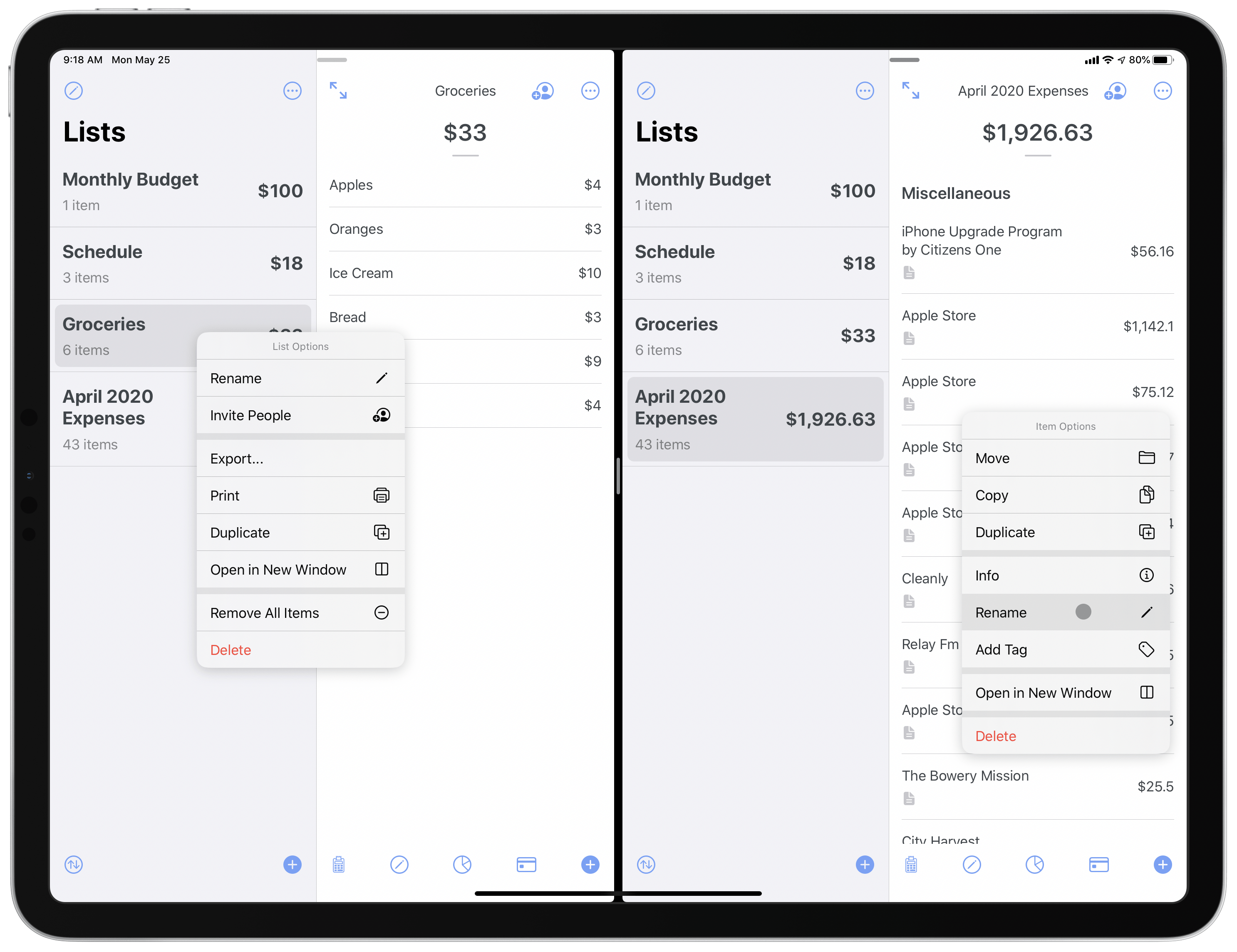 Spend Stack 1.2 adds full support for the iPadOS cursor, which now snaps to buttons, highlights relevant UI elements, and can be used for quickly loading context menus with a right-click. This latter option is especially valuable because version 1.2 also introduces enhanced context menus. There are now a rich assortment of actions available in menus both for list items as well as your lists themselves.

I love what developer Jordan Morgan has done with context menus. Paired with the speed of the cursor’s right-click option for loading these menus, it’s fantastic having so many actions a quick click away. While I expect to see such rich context menus in pro-focused apps (and am often surprised by their absence there), Spend Stack proves that there’s great value in apps of all complexity levels going all-in on context menus.

Another enhancement I want to highlight is the new transient banner that appears at the top of the screen after certain actions, such as a successful drag and drop move operation or CSV import. Following the same style as the second-generation Apple Pencil’s charging indicator, or the popup when toggling your iPhone’s silent mode switch, this new banner is a delightful bit of design whimsy that I’d love to see in more third-party apps. Spend Stack’s use of the banner is perfect because I appreciate having an extra form of confirmation that I dragged items into the list I intended, but I can see apps finding even more uses for these indicators with different operations you’d like additional confirmation for.

Finally, Spend Stack now offers sixteen different app icon options to choose from, so you can customize the app’s look to fit in well on your Home screen. One nice feature I’ve never seen in another app is that the icon selector lets you tap an icon to preview a high-resolution version of it. It’s not an essential feature by any means, but I’ve found it useful, and it’s yet another design detail that shows how much care has been put into this app. 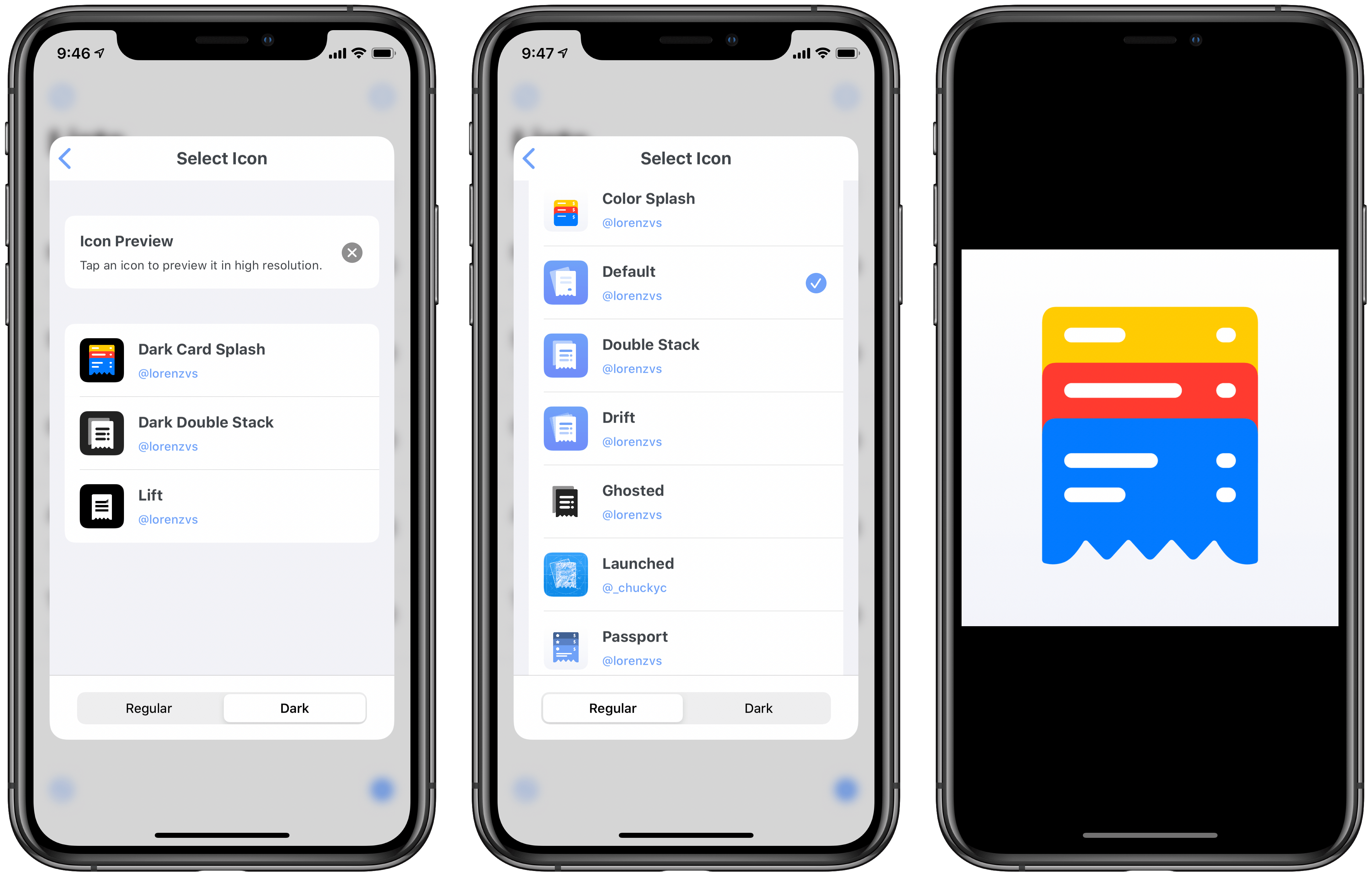 After its initial launch, Spend Stack impressed me with its elegance and rich support for modern system features. In its second major update since then, those themes are just as present as ever. I love the new finance-related options like Apple Card import, recurring costs, and currency settings, but it’s the thoughtful implementation of context menu actions, transient banners, and the high-res view for alternate icons that make the update especially unique for me.

If you need an app to store finance-related lists, look no further than Spend Stack. But also, if you’re a developer looking for inspiration for your own app, or you just enjoy the intricacies of design, Spend Stack is worth trying for those reasons alone.

Spend Stack 1.2 is now available on the App Store, where the app is on sale for $2.99 until the end of May.