Word game addicts, say goodbye to your family, friends, and productivity: Spelltower is back and better than ever. The newly launched Spelltower+ from Zach Gage and Jack Schlesinger takes the original game, modernizes it for the latest iPhone and iPad screen sizes, adds lots of new game modes, and packs several other key feature enhancements. Whether you’re a longtime Spelltower fan, or the game missed your radar entirely in its glory days, Spelltower+ deserves your attention.

I’m one of those people who somehow missed out on Spelltower the first time around. My first Zach Gage game was Flipflop Solitaire, and ever since then I’ve been an avid follower of his work. In digging through Gage’s full iOS portfolio a few months ago, I saw that Spelltower – originally launched in 2011 – looked like a big success in its time, but the app unfortunately appeared dated, so I didn’t download it. That history makes today’s launch all the more exciting for me.

Spelltower is a word game in which you trace on a grid of letters to connect them and form the longest words possible. It’s like connect the dots, but with letters. You can connect letters that are on any side of each other, including diagonal and backwards, and the longer the word, the better. Most tiles are just standard, but certain colored tiles give you a bonus of some sort, such as the blue tiles that take out the full row they’re sitting on when used. Yellow tiles are a new addition to Spelltower+, offering multipliers on your word’s point value. Overall gameplay is extremely simple, but hard to put down. It’s just plain fun, and the brilliant sound design and haptic feedback on iPhone make for a quality overall experience. 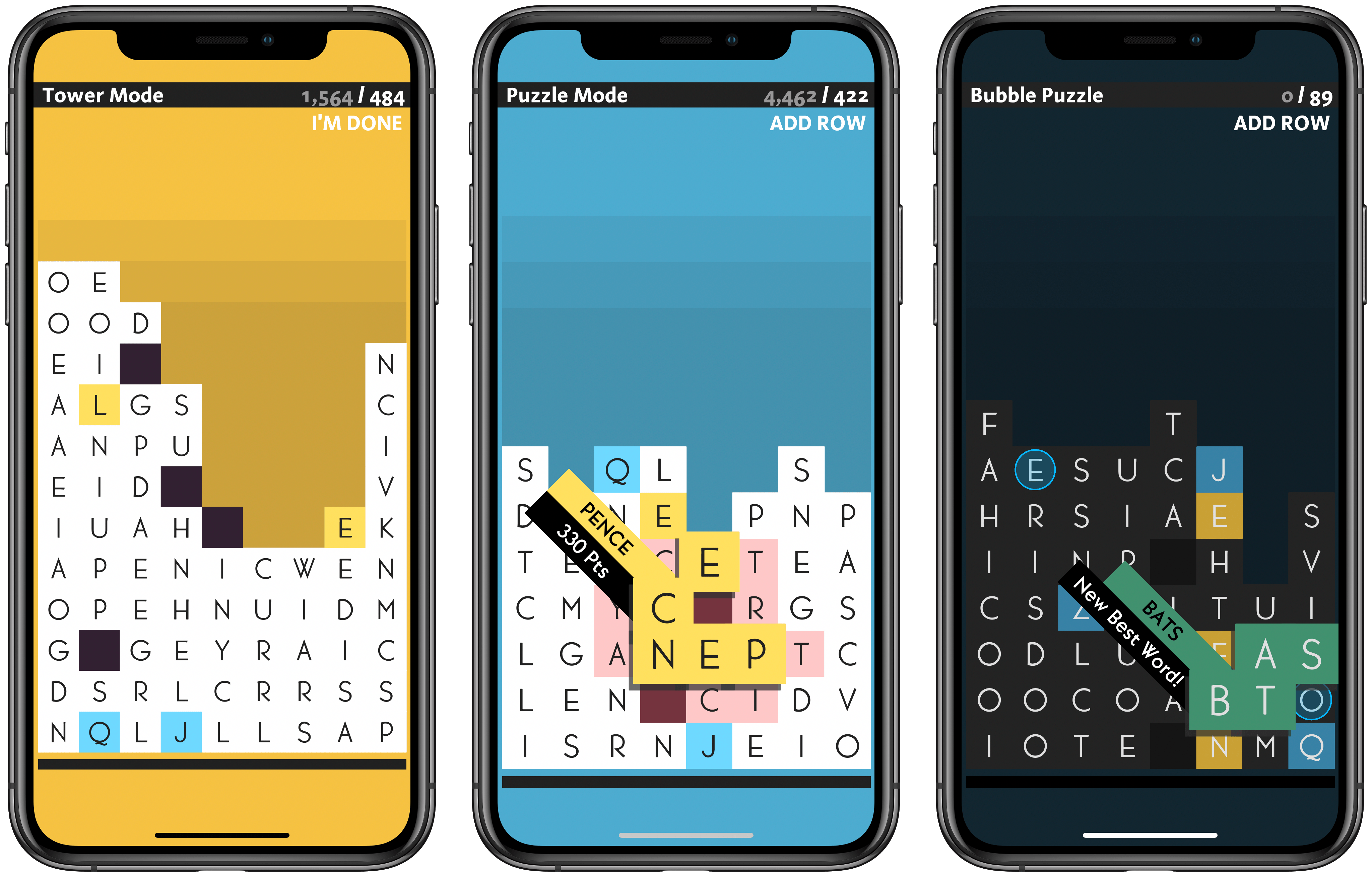 Spelltower+ includes popular modes from the original game, such as Tower, Puzzle, and Rush, while adding several brand new modes, many of which are variations of Puzzle. Double Puzzle adds two rows to the screen with every word played, rather than the standard one row added in regular Puzzle mode. Bubble Puzzle includes bubbled tiles that can’t be used until you pop the bubbles by creating words adjacent to them. Ex Puzzle requires you to form extra long words, because some of its tiles have length requirements that go up to 8 letters.

The new Search mode features a square of tiles, with the center tile having a star on it. Your job is to form the best possible word that uses that center tile. You can form words without it if you’d like, but only words using the center tile will score. I’ve found Search mode a fun option when I don’t have much time or don’t want the mental strain of needing to form a lot of words in succession. There’s also a Daily Search mode, which joins the existing Daily Tower option in providing new challenges for each day. 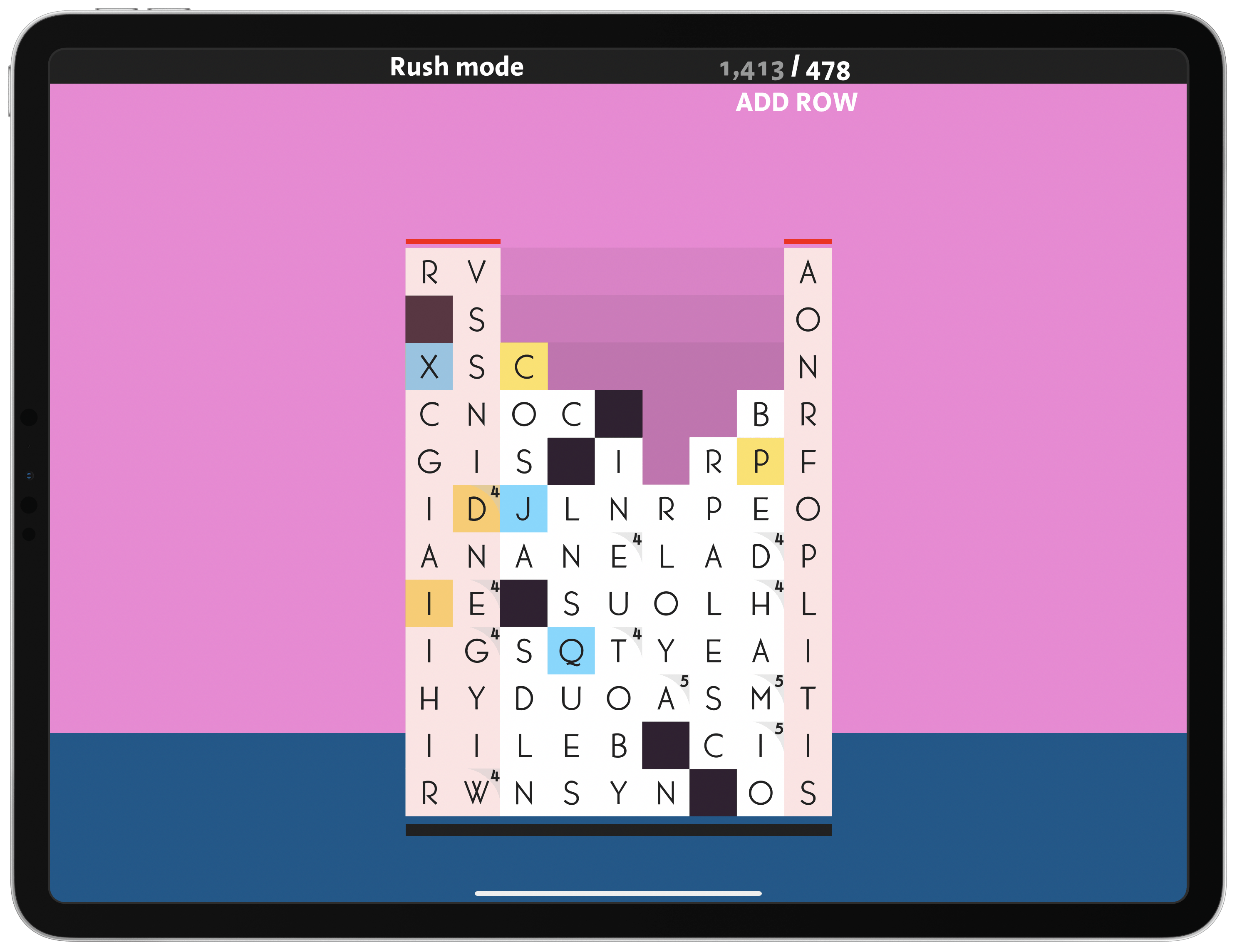 The last new mode is Blitz, which I recommend playing only if you’re a masochist. In Blitz mode there’s a rising tide that’s constantly moving from the bottom of the screen to the top, and once it gets to the top, a new row is added. The pressure of seeing that persistent timer foretelling my doom makes this a mode I tend to avoid.

The new modes are the main attraction here, but they aren’t the only important additions. All modern iPhone and iPad screen sizes are now supported. iCloud backup has been added for restoring your data. And Game Center integration enables leaderboards and achievements.

Too many of the App Store’s earliest games slowly disappear, never to be enjoyed by a new generation of iOS users. I’m happy Spelltower isn’t going to become one of those titles. Spelltower+ is a great re-launch of a classic, offering plenty of fun for the game’s original audience while being repackaged for a brand new group of users. Clear your schedule before downloading, or else proceed at your own risk.

Spelltower+ is available as a free download on the App Store, with a $4.99 In-App Purchase for full game unlock.