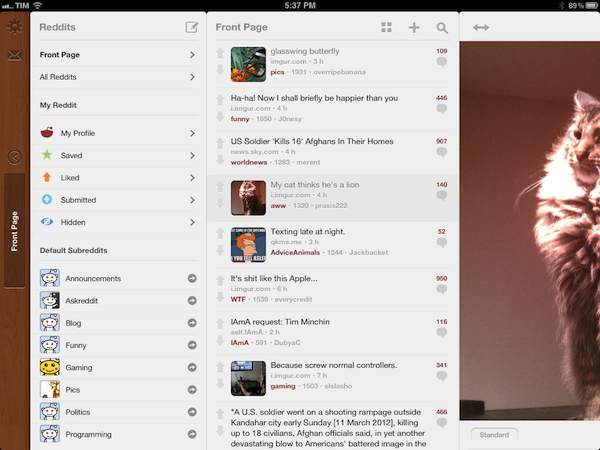 When I’m not writing, reading, or talking to my team, one of the things I like to do online is casually check on Reddit for the latest meme, links to interesting news, or more serious discussion that can only take place thanks to Reddit’s unique nature and community. And when I’m not using my computer, which is “most of the time” these days, I like to do so using Jason Morrisey’s Alien Blue, a Reddit client for iOS that I recently re-reviewed in its newest iPhone version, and that today received a major 2.0 update on the iPad.

Just like the 2.5 update for iPhone, Alien Blue HD 2.0 includes several interface changes to make the Reddit browsing experience more pleasant, as well as various new features that take advantage of the iPad’s larger screen. For instance, Alien Blue HD is already Retina-enabled for the new iPad, with the exception of launch images, which will be updated soon. But the biggest change in this version, new coat of interface paint aside, is the new panel-based navigation that allows you to seamlessly move through Alien Blue’s main sidebar – which lists Reddit sections and subreddits – and posts, comments, and web views. Inspired by Twitter for iPad’s panel-based UX, but much simpler to use, Alien Blue lets you swipe through panels to move around in the interface, or simple pinch on these panels to dismiss them. In fact, the entire app has been tweaked to allow for more gestures, as listed below:

I’ve found myself using the double-tap and 2-finger tap gestures a lot, and I think they contribute to making the app faster and easier to use. A visual guide for gestures is available in the Settings screen as well. 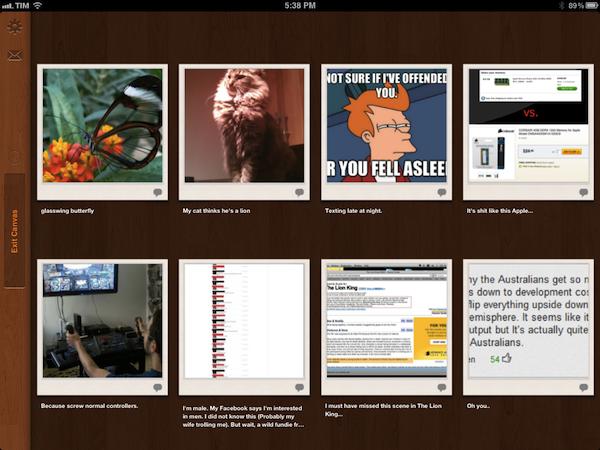 There are several improvements and optimizations that found their way in this 2.0 update. The app now supports larger thumbnails, and you can view videos alongside comments in any thread. The post and comment interfaces have been redesigned, alongside the new pull-to-refresh gesture that works similarly to its iPhone counterpart (the subtle animation is pretty amazing). Image links and YouTube videos are now displayed more elegantly, and a new “Optimal” setting for web views enables webpages to scale intelligently to fit Alien Blue’s window. There’s more: you can now delete posts, and links to subreddits open directly within Alien Blue. The app sports Evernote integration to let you save posts in any of your notebooks, and you can check out a submitter’s details right from a post you’re viewing. There are new tags for NSFW posts, and Facebook and Twitter sharing have been fixed. There are dozens of little improvements and fixes in Alien Blue HD 2.0, so I recommend you check out the release notes for the complete list.

More importantly, I like how Alien Blue’s experience is still intact in spite of the interface changes and new navigation schemes. You can still switch to Canvas view to browse images as large thumbnails, and there are several themes to choose from in the Settings. The new UI doesn’t add weight to the app in terms of performance, as Alien Blue still scrolls smoothly and updates fast on the iPad 2.

Alien Blue HD 2.0 offers a rich and intuitive Reddit experience in a native app that comes with many options to interact with Reddit content and links submitted to the site. Even if you don’t spend hours on Reddit every day, the app still offers an incredibly polished experience that I recommend you consider if you’re planning on browsing Reddit from your iPad.