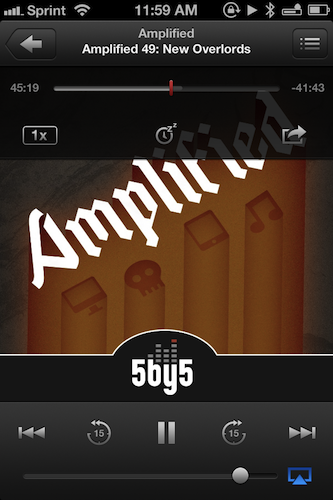 Yesterday, Apple updated their podcast player by introducing some great new features as well as some visual changes to the Now Playing view. I’ve talked at length before about Podcasts and where it stands amongst other podcatchers on the App Store, but I’d like to revisit some of those notions as playlists take center stage in the form of stations.

Once featuring big square buttons and reels that spun tape as episodes played, Podcasts 1.2 introduces a more contemporary design that resembles iOS’ native music player for the Now Playing view. Controls that were once tucked away under album art can now be found in an opaque control bar that’s revealed by simply tapping the screen (it’s always shown on the iPhone 5). 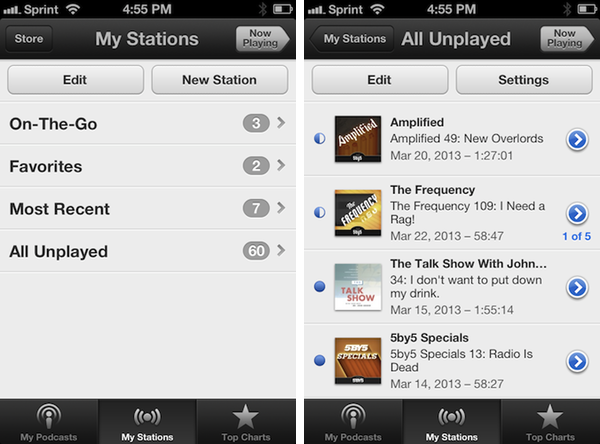 The inclusion of stations, however, is the most important change that adds a lot of new functionality. Stations are Apple’s take on playlists, with the new My Stations tab finding a comfortable space between My Podcasts and Top Charts. Apple includes stations such as Most Recent and All Unplayed from the get-go, providing an overview of what’s possible if you’d like to create your own. You can even delete these stations and change their settings in case you want to change the play order or the podcasts that are included. If you’ve created playlists in iTunes, they should automatically show up in Podcasts as stations.

The podcasts in your stations are sorted by play order. If you tap the edit button you can arrange them manually, but the two basic options are Most Recent and “My Podcasts” Order. The latter isn’t as obvious, but it sorts included Podcasts in the order that you have them arranged on the My Podcast’s tab. Be aware that individual episodes are grouped with the podcasts in your stations. If you only want to listen to certain episodes, the On-the-Go station (which you can’t remove) gives you opportunity to pick out a set of stations you’d like to listen to. My Stations and the features it provides are great for people who listen to podcasts on their daily commutes. 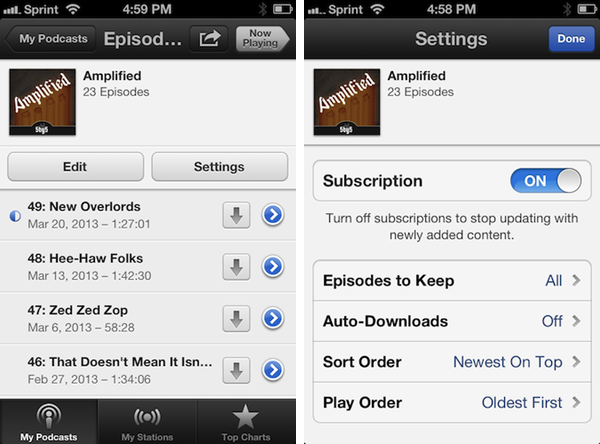 A lot of people, including myself, are simply going to tap on artwork in My Podcasts and listen to a few episodes of our favorite programming at a time. Here, and more specifically, you can change the settings per podcast to alter sort order and play order (such as playing from the oldest episode first). The features here aren’t necessarily new, but they’re worth mentioning for the sake for clarity.

I still see Podcasts being a podcatcher for everybody, an app that makes it easy to play episodes without extravagant features found in apps like Instacast and Downcast. Stations don’t provide the granularity that playlists found in other podcatchers do (mostly because stations keep episodes grouped with their respective podcasts), but in combination with the settings found in My Podcasts, listeners can creatively build smart playlists that contain exactly what they want to listen to. I think stations will be most useful for people who regularly listen to podcasts as a backlog of episodes won’t interfere with what someone might expect to play next. 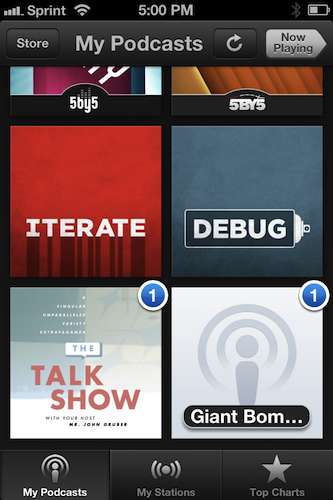 Unfortunately, Podcasts is receiving a fair amount of criticism in the App Store. Currently, it’s less than three stars. Many reviewers are complaining about slow loading times, crashes, missing artwork, and difficulty in finding the updated controls on the Now Playing view. A podcast I have is missing artwork, and I occasionally have trouble with playback position or podcasts not being stored in iCloud. I’m not sure how to troubleshoot something like that without visiting Manage Storage in the Settings and deleting Podcasts’ Documents & Data. I don’t think this is something people using Podcasts should have to do or worry about. Asking people to delete the app and start over is also a lot to ask for if they have to set up their podcasts again. When Podcasts works it just works (I really like the app). When it doesn’t… well it’s frustrating. Because it’s from Apple and it’s free to download, the app is likely the first podcatcher someone will install and will be (and I think fairly) more scrutinized.

I do think that Podcasts is better off separate from the Music app. Before Podcasts, it was difficult to organize and get podcasts onto iOS device. Today, Apple provides a standalone application that recognizes podcasters and puts their shows in the forefront under categories like Top Chart. It’s easy to browse the catalogue and discover new podcasts. I’d like Apple to go one additional step and enable links to be displayed in an episode’s show notes — podcasters put a lot of work into ensuring the topics they talk about can be followed or referenced to by their listeners, and currently these links aren’t tappable.

As for the features Apple’s introduced in Podcasts 1.2, the inclusion of stations makes me happy as someone who finds time to listen to shows while driving. I think Podcasts as a whole is a good app — my problems are few. But as Apple’s promoted podcatcher for iOS, it’s becoming more important that issues people have are sorted out.