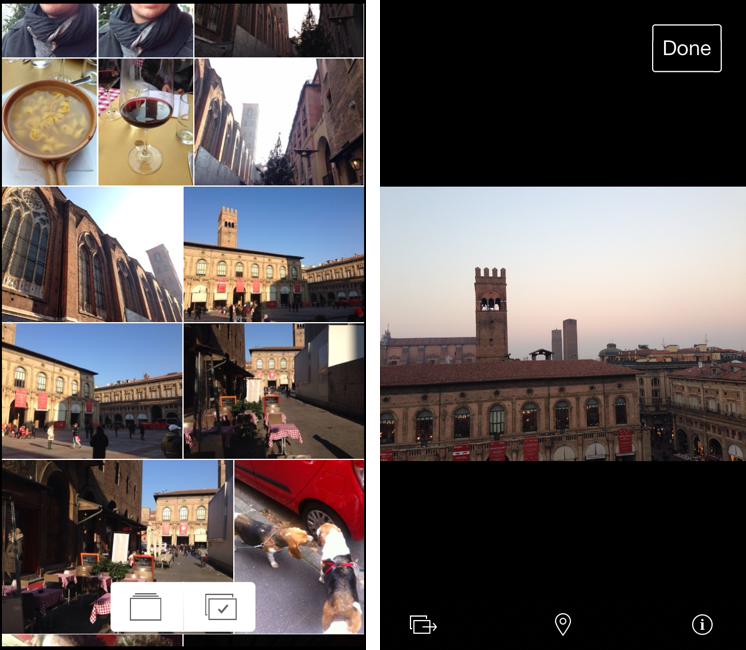 Developed by Second Gear’s Justin Williams, Photos+ is a $2.99 photo browser for iPhone that supports metadata, albums, and animated GIFs.

Photos+ provides an alternative way to view photos you’ve taken on your iPhone if you don’t like the new Photos app of iOS 7. Photos+ doesn’t have any time or location-based sorting feature – it’s a mosaic of large photo thumbnails displayed in reverse chronological order (from newest to oldest). There are no settings, no filters to exclude screenshots from the list, and no special gestures to learn. As you scroll, you can tap thumbnails to open photos in full-screen; when you want to dismiss a photo, you flick it up or down like a card.

When you open a photo, Photos+ lets you view EXIF metadata for camera model, photo information, date and time stamp, and photo size; you can also view GPS information with an embedded Maps view, although there’s no way to open a location in the Maps app.

Unfortunately, when viewing photos from my iPhone and testing Photos+, I came across a bug that, for most photos, showed “Unknown Capture Date” in the timestamp field. I have the same issue in photo viewers for the Mac like Preview, but other iPhone apps like Camera+ show correct timestamps for my photos (taken with the Apple Camera app). I don’t know what’s causing this problem and why other iOS apps don’t have it, but, for my tests, it meant I couldn’t fully take advantage of one of Photos+’s primary features. 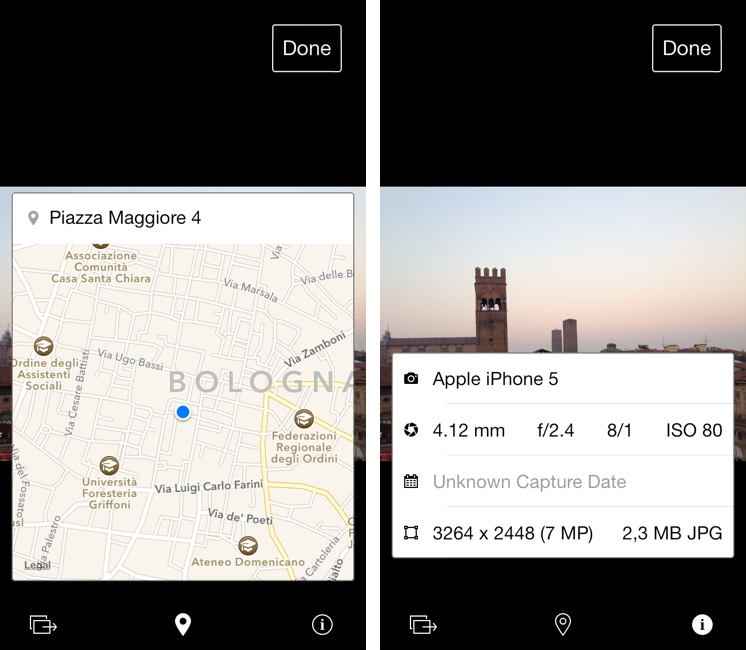 In the main screen, there are two floating buttons at the bottom to open existing albums and select photos you want to share or add to an album; you can also create new albums directly from Photos+. I experienced a bug that listed an album’s name twice, and the app crashed a couple of times when opening thumbnails and during the saving-to-album process; I was told by Williams that fixes will be included in an update on track to be released after the iTunes Connect holiday shutdown.

Photos+ is a nice way to browse photos and view photo metadata on the iPhone, which lacks this feature in the Photos app (iPhoto has it). Aside from issues I’ve experienced on my iPhone, I think that Photos+ is, in this first version, too simple: there are no filters to exclude screenshots or specific albums from the Albums menu, and the sharing menu uses Apple’s default share sheet – which includes a “Save Image” button for photos that are already saved in the Camera Roll. The app doesn’t have an “Open In” shortcut, and the removal of the status bar from the full-screen layout doesn’t let you quickly scroll back to the top of the photo list.

Photos+ does some good things (the aforementioned metadata panels, support for animated GIFs), but I’d like to see more features and, more importantly, fixes and performance improvements.