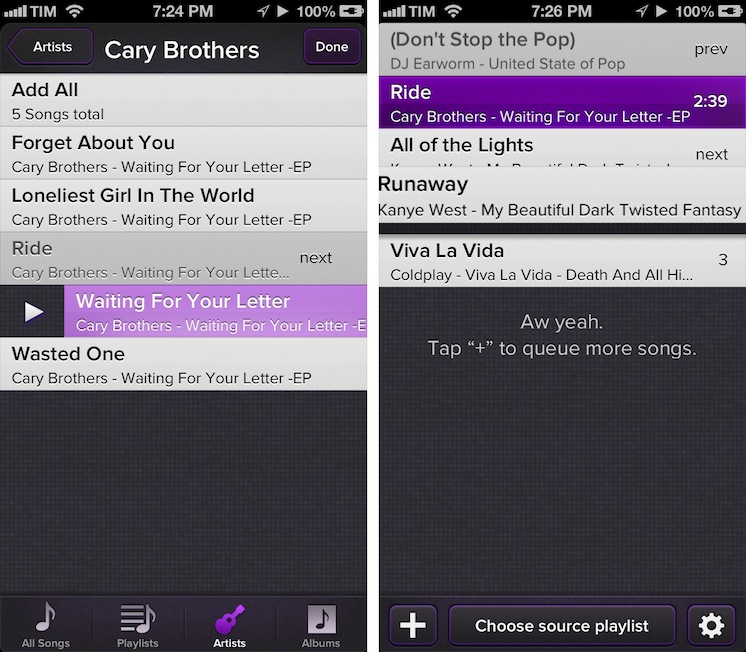 Party Monster is a Universal iOS app to queue songs in a temporary playlist, perfect for parties, dinners with friends, or, generally, every time you want to listen to specific songs in a specific order. As you may know, I’m a passionate Rdio user, and local music with iTunes doesn’t really fit with my listening habits. I wouldn’t mention Party Monster, however, if it weren’t for its approach and attention to detail that made it stand out for me.

Developed by Steam Clock Software, Party Monster is essentially composed of two main views: Up Next and Library. If that’s reminiscent of the latest iTunes, that’s the point: to create a queue of “up next” songs from existing media in your Library. Party Monster plugs directly into the iOS Music app, offering an embedded Library view to access All Songs, Playlists, Artists, and Albums. Adding songs to the queue is extremely simple: you can just tap on them to send them to Up Next, then you can open the other view and “slide to play” to start playback. On the iPad, the split interface is particularly handy as two panels are always shown thanks to the bigger screen; on the iPhone, the Library is accessible by tapping on a “+” button.

Even if I won’t use it on a daily basis, I feel safe recommending Party Monster for its implementation of touch, animations, and little details. In Up Next, you can tap & hold on songs to reorder them in the queue, with a nice shadow underneath each cell to indicate its “floating” status. The currently playing song “sticks” at the top of the screen as you scroll, featuring a purple glow (a recurring color theme in the app) that animates every few seconds. Songs that have already been played in the queue can be played again: like any other song, you can swipe to reveal the Play button, but in the case of already-played songs, they’ll also “fly back” from the top. It’s a subtle and satisfying animation. Like Apple’s lock screen camera icon, there’s a bouncing animation that hints at the hidden play button: tap a song in the queue, and the cell will bounce to show the play button on the left, and a delete button on the right.

One more thing: Party Monster has a setting to refuse playing Nickelback. If you add a Nickelback song to the Library, not only will it be grayed out, upon tapping Party Monster will also pop up a dialog saying you chose to exclude Nickelback. I am not joking: 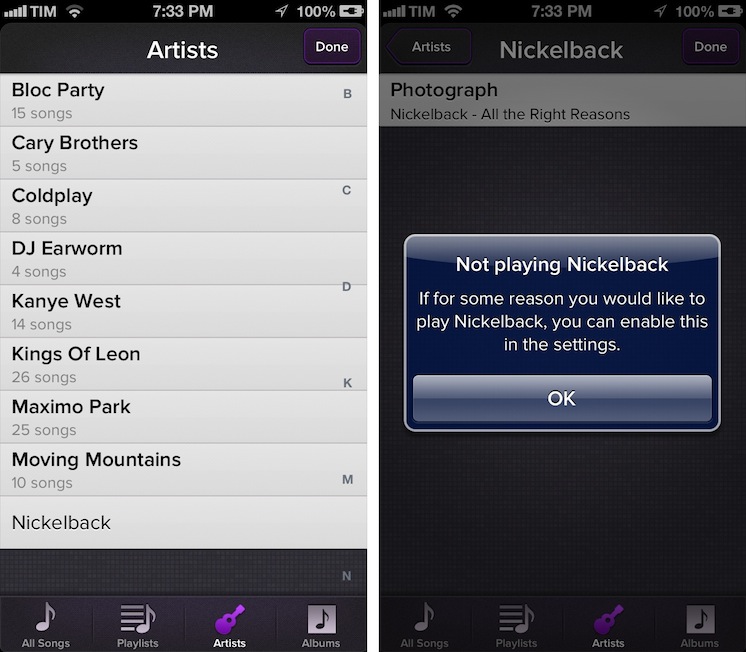