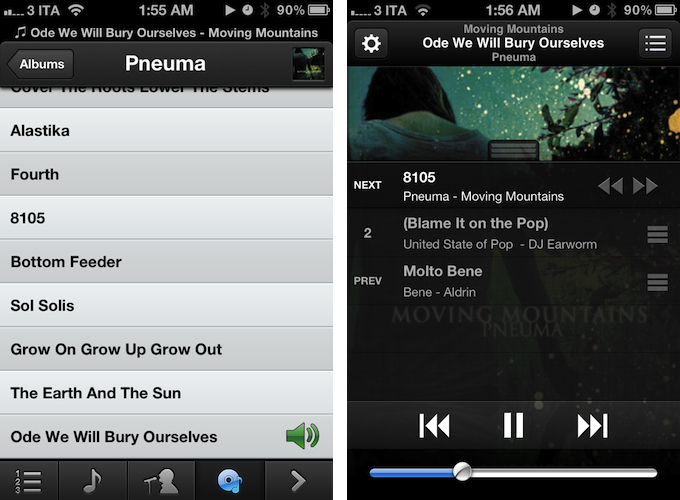 These days, most of my music consumption happens on Rdio. The term “consumption” isn’t there because that’s how providers like to present content: I consume albums and artists that I discover online. However, for as much as I’m completely hooked to paying a monthly fee to get access to a (virtually) unlimited amount of music, there are albums that I still have to keep synced locally through iTunes. Either because Rdio applies some curious restrictions on several artists from Europe or because these artists choose not to make their music available for streaming (ask Coldplay), I have resorted to keeping a portion of my music synced on the devices I own (32 GB iPhone 4S and iPad 2, soon to be new iPad). And when I want to play songs from this “mini library” I sync, I stumble upon the same problem I initially wrote about last year: Apple’s Music app doesn’t let me create queues, and I loathe creating playlists for all possible scenarios my music listening habits may fall into. Just like last year, Dan Pouradi’s OnCue comes to the rescue, this time with a completely re-engineered version that works with iOS 5, and sports a new UI.

I want to get this out immediately. I don’t like how the new OnCue resembles Tweetbot on the iPhone. I feel this happens less on the iPad, which is a more spaced out version of OnCue with some clever UI optimizations, but I think Dan wanted to borrow some of Tapbots’ distinctive style for the iPhone app. While this is not a problem neither technically (the app works amazingly well) or ethically (like it or not, some apps do set standards, and it’s inevitable that other developers will be inspired by them), it raises the question as to whether the developer could still do more to make OnCue even slightly more unique in terms of tab bar design, background colors, and button design. Thankfully, the design inspiration doesn’t impact the functionality of the app, which reaches a new high with version 5.0. 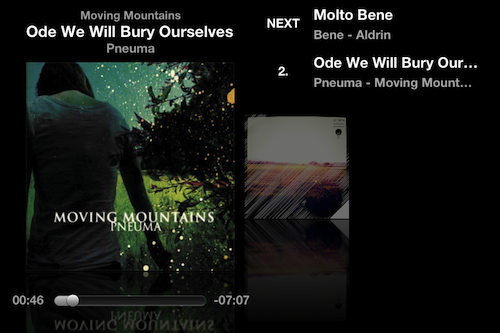 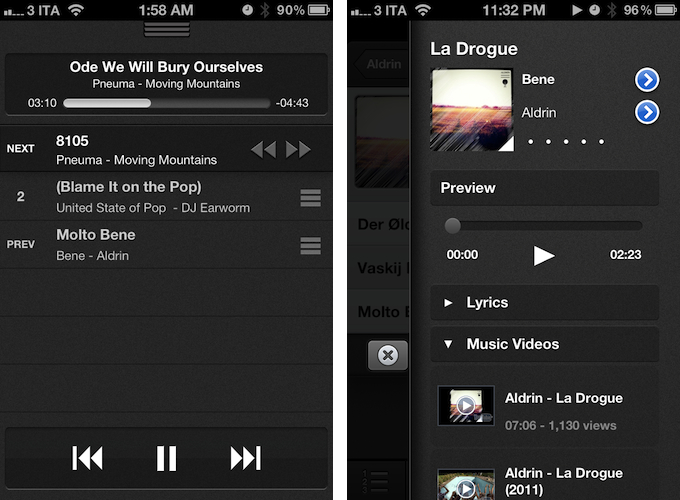 First off, a note on the music that OnCue can control. Per Apple’s limitations, the app is unable to load DRM-protected iTunes songs and iTunes Match songs that haven’t been downloaded on the device. Like any other third-party music controller, OnCue works with direct access to a user’s synced library in the Music app, so don’t expect the app to allow you to sync your own MP3s or download songs from the cloud. Similarly, OnCue can’t update a song’s play counts and other iTunes metadata.

OnCue lets you build a queue for songs you want to listen to in a specific order. Whereas Apple’s Music (and, to an extent, iTunes) highlights playlist creation and management, OnCue is aimed at letting you easily pick songs and set an order you want to play them back, even if they belong to different artists and albums in your library. And with this version, OnCue gains the capability of creating “smart queues” – think Smart Folders from the OS X Finder, only applied to music with rules specific to your library. With this new function, you can create queues you’ll load up at a second time, and let the system automatically fill them with songs that match your criteria. For instance, you can save smart queues that only look for songs above 3 minutes and from a specific genre, or Artists whose name doesn’t contain “Chris Brown”.

You can use OnCue just like any other music player – it’s got sections to browse by artist, albums, all songs, and an arrow icon in the bottom bar that lets you check out more sections such as Genres, Queues & Playlists, Help, and Settings. In the middle of the action, though, is the Queue tab, which will list all your currently playing and upcoming songs, also allowing you to save an ongoing queue as a collection for later (like the queue you’ve just built? Save it and load it whenever you want), and search for a song in your library.

OnCue, both on the iPhone and iPad, relies extensively on gestures to let you build up your queue and manage items inside it. While scrolling through your library, a swipe to the right on any song will reveal a bar to check out a song’s info panel, jump to the related artist and album, and add it to the queue. The info panel is particularly interesting, as it contains various artist-related information such as lyrics, music videos from YouTube, bio, and similar artists. As you can imagine, this is even more enjoyable on the iPad, where the larger screen real estate makes interaction feel less constrained and more fluid. 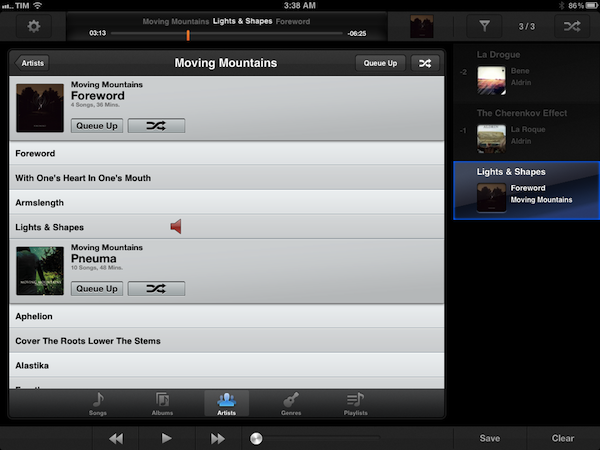 Swiping, however, isn’t the only way to get songs into your queue. OnCue comes with a drag & drop gesture that, once activated with tap & hold, enables you to add songs to your queue in a much more intuitive fashion – in fact, this is my preferred way of building queues in OnCue on both devices. On the iPad, you can tap & hold, wait for a song to become a “draggable element” (the change is conveyed visually), then drop it on the top “now playing” bar to play it immediately, or drag it to left to add it to your queue. The same is true on the iPhone, albeit there are some key differences in the user experience. Whilst the queue is always visible on the iPad app (which can only be used in landscape mode), the iPhone can’t benefit from the additional pixels, so the developer came up with a quite clever method of pulling up the queue at any time. From the bottom of the screen, you can swipe up to reveal a “quick queue” that’s also got control buttons for playback. This alternative queue UI is managed by a Notification Center-like drag handle; I love the idea, but I’d like to see a better dismissal method once the queue is shown as said handle icon can create a few issues with Notification Center (pro tip: just start dragging from the now playing widget at the top, rather than the status bar). The way I use OnCue, I definitely prefer drag & drop to swiping on a song and hitting the Next button.

There is one thing I like about swiping, though, and that is the swipe left action. Every time I build my queue, I realize I’ve picked some pretty good songs, but I started with the wrong one. By swiping left on any song in my queue, I can swap it with what’s currently playing, and come back to it later.

There are many little touches and options to play with in the Settings of OnCue, but there are three I’d like to mention here. First is the Lock screen view, which isn’t like anything I’ve seen so far on iOS as the app is capable of injecting its own queue on top of the album artwork displayed by default on the Lock screen. Second is the advanced crossfading control, which is very nice to have in the queue (I set mine at four seconds). Last, landscape mode on the iPhone, which is basically unchanged from the version I reviewed last year, but that is still great.

I like OnCue. I think the developer could do more to help differentiate some parts of the app from Tweetbot – especially on the iPhone – but from a functionality standpoint there’s nothing I can object to. I’m told an update is already in the works to add iCloud syncing,  keyword tagging for Smart Queues, and additional fixes, so we have something to look forward to as well. If you think proper queue management is a feature you miss from iOS’ Music app, get OnCue now and you won’t regret it.