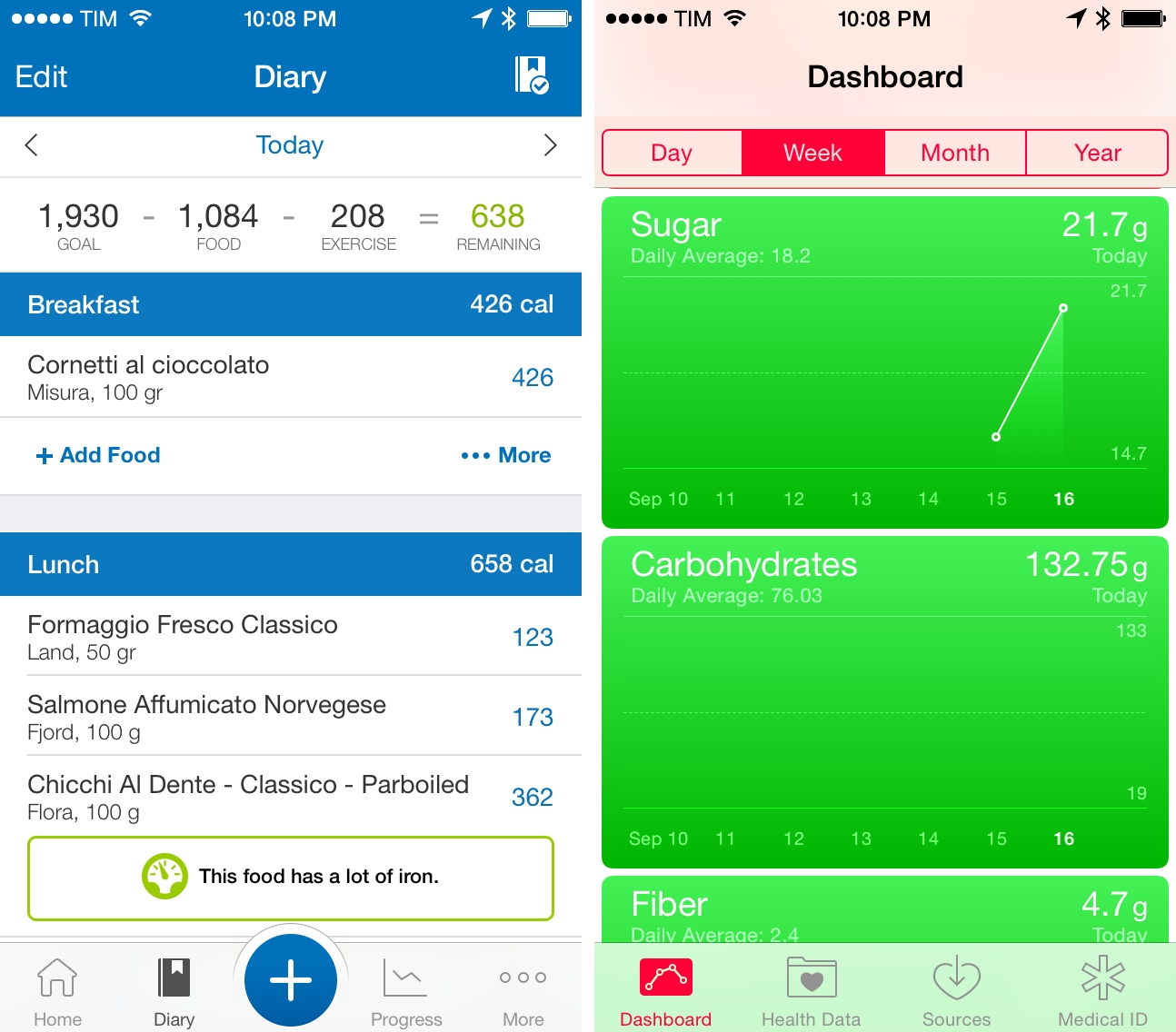 Popular food tracker and calorie counter MyFitnessPal, available for free on the iPhone, iPad, web, and other platforms, has today introduced an update for iOS 8 users that adds support for Apple’s new Health app. I’ve been testing the updated MyFitnessPal, and I believe that Health integration has the potential to be a great way to let the app integrate with other services on iOS 8.

I started using MyFitnessPal earlier this year when I realized that I needed to get back in shape after cancer treatments I went through in 2012. I will save the details and full backstory for a dedicated article, but, in short, since June I’ve been saving everything I eat and drink into MyFitnessPal. The app is one of the most popular food tracking utilities on the App Store, and it ships with a built-in database containing millions of foods and meals, plus a barcode scanner to easily add new foods to your meal diary.

Health integration is available in the latest version of MyFitnessPal and it’s based on HealthKit, a new framework that allows third-party apps to save fitness and health-related data into a unified dashboard – the Health app – that other apps can access to read data. Apple has built a bridge for nutrition values, vitals, sleep analysis, body measurements, and other health data, hoping to bring consistency and a unified data layer to health and fitness apps for iOS.

Once enabled in the Sharing settings, MyFitnessPal will be able to save nutrition data for calcium, carbohydrates, dietary calories, fiber, and other data currently supported by the app when logging foods. Similarly, MyFitnessPal will be able to read data stored in the Health app, which enables the app to fetch information about values it can’t track on its own such as blood glucose, blood pressure, workouts, or cycling distance. 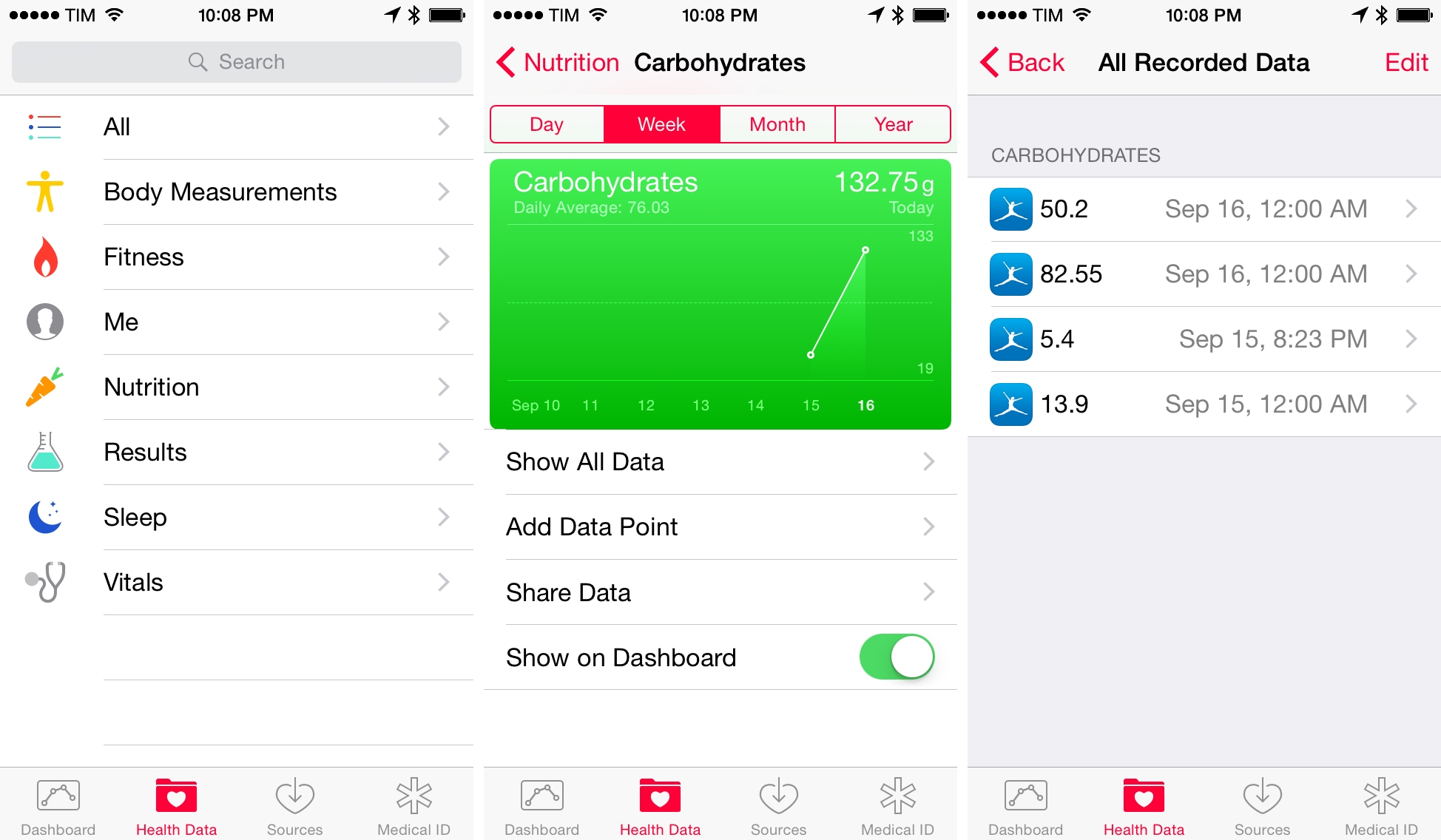 In the Health app, categories connected to MyFitnessPal will be populated as soon as you start adding foods to your diary. Data is displayed in the Dashboard view of the Health app with tabs to switch between Day, Week, Month, and Year segments; alternatively, you can browse categories and see all the data that MyFitnessPal saved as individual entries sorted by time.

As a daily user of MyFitnessPal, the benefits of Health integration will only be clear once more apps start using HealthKit to store their data in a common database available to multiple apps. In the months I’ve spent testing and using health and fitness apps, I’ve come across dozens of proprietary APIs that offered custom integrations of various services. These would often result in confusing implementations with no obvious explanation of how data was being moved around between, say, a Jawbone UP tracker and Withings’ Health Mate app.

MyFitnessPal is well known for the dozens of apps, wearable devices, and web services that it already supports on multiple platforms. Before iOS 8’s Health app, I was using MyFitnessPal as the dashboard and bridge for all my health and fitness data. I’m curious to see how Apple’s Health app and HealthKit will change the way I use MyFitnessPal going forward.

MyFitnessPal is available for free on the App Store.