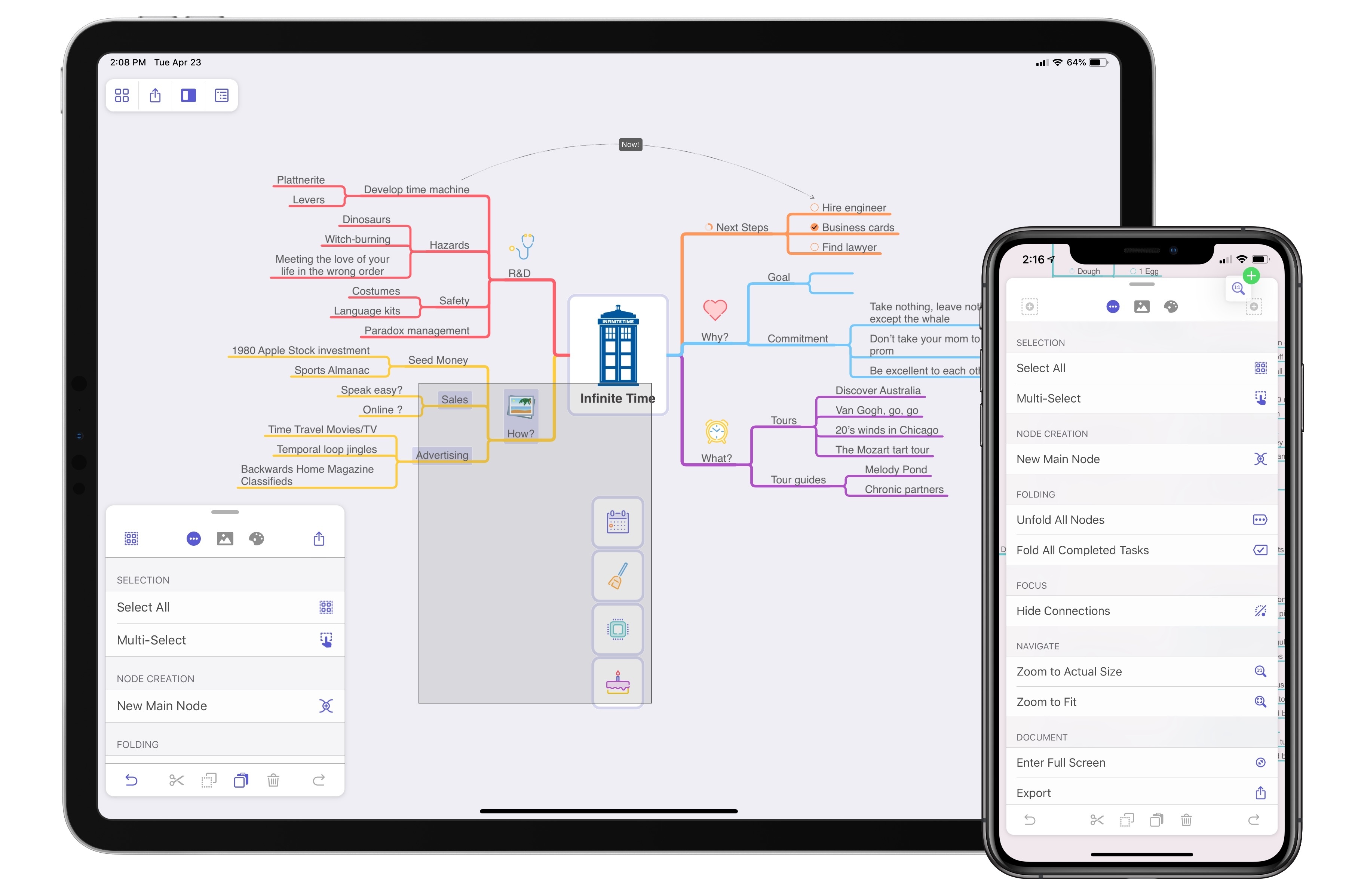 Mind mapping is meant to bring out your thoughts and ideas in a visual way, so the ability to focus while creating your map is key. In that vein, MindNode 6 introduces a new Focus mode that brings the current branch you’re working on to the forefront while dimming all other parts of your map.

Engaged by selecting a node then hitting ‘Enter Focus’ from the Action panel or the contextual pop-up menu, I find that Focus mode is ideal for larger, more detailed mind maps where you really go deep hashing out a particular project or, as I’m more prone to, an article. Focus mode not only dims the rest of your map, it also automatically zooms in on your selected node – a nice added touch. 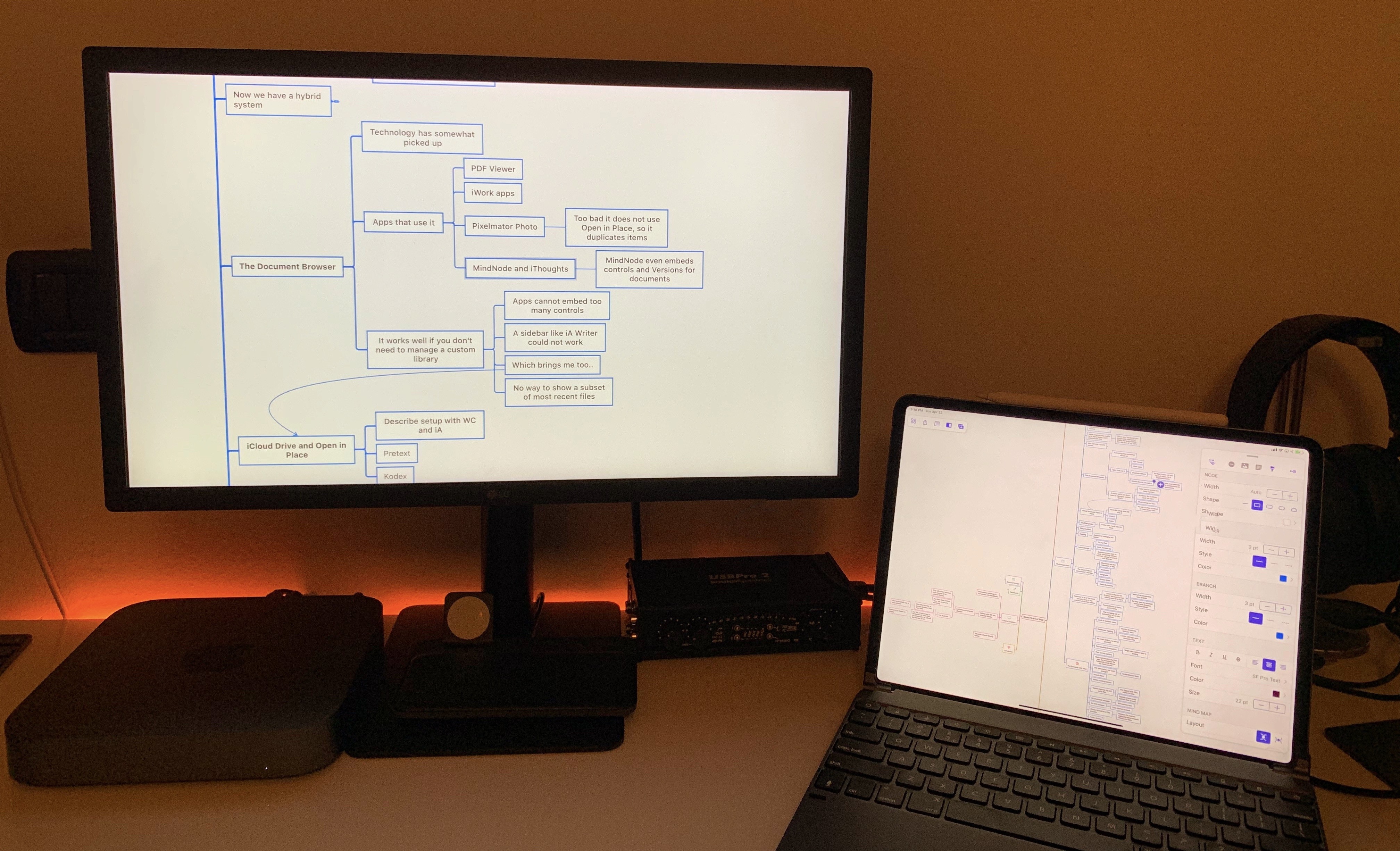 A second way MindNode 6 aids focus is through its rich support for external displays. When connecting your iPad Pro, for example, to an external monitor via USB-C, MindNode now lets you have different parts of your mind map appear on your iPad and the connected monitor. You may want to keep the full map in view on the external monitor, ensuring the big picture remains but a glance away, while simultaneously working on a specific zoomed in section of your map on the iPad’s display. The app also supports viewing attached photos and notes on external monitors while your iOS device displays your map itself.

If you’ve ever encountered a time – and you likely have – when you wanted to modify the details of multiple nodes simultaneously, you probably tried a few things before discovering, frustratingly perhaps, that such a task was impossible. Enter MindNode 6’s multi-select option, a simple fix that makes it easier than ever to bulk modify nodes. 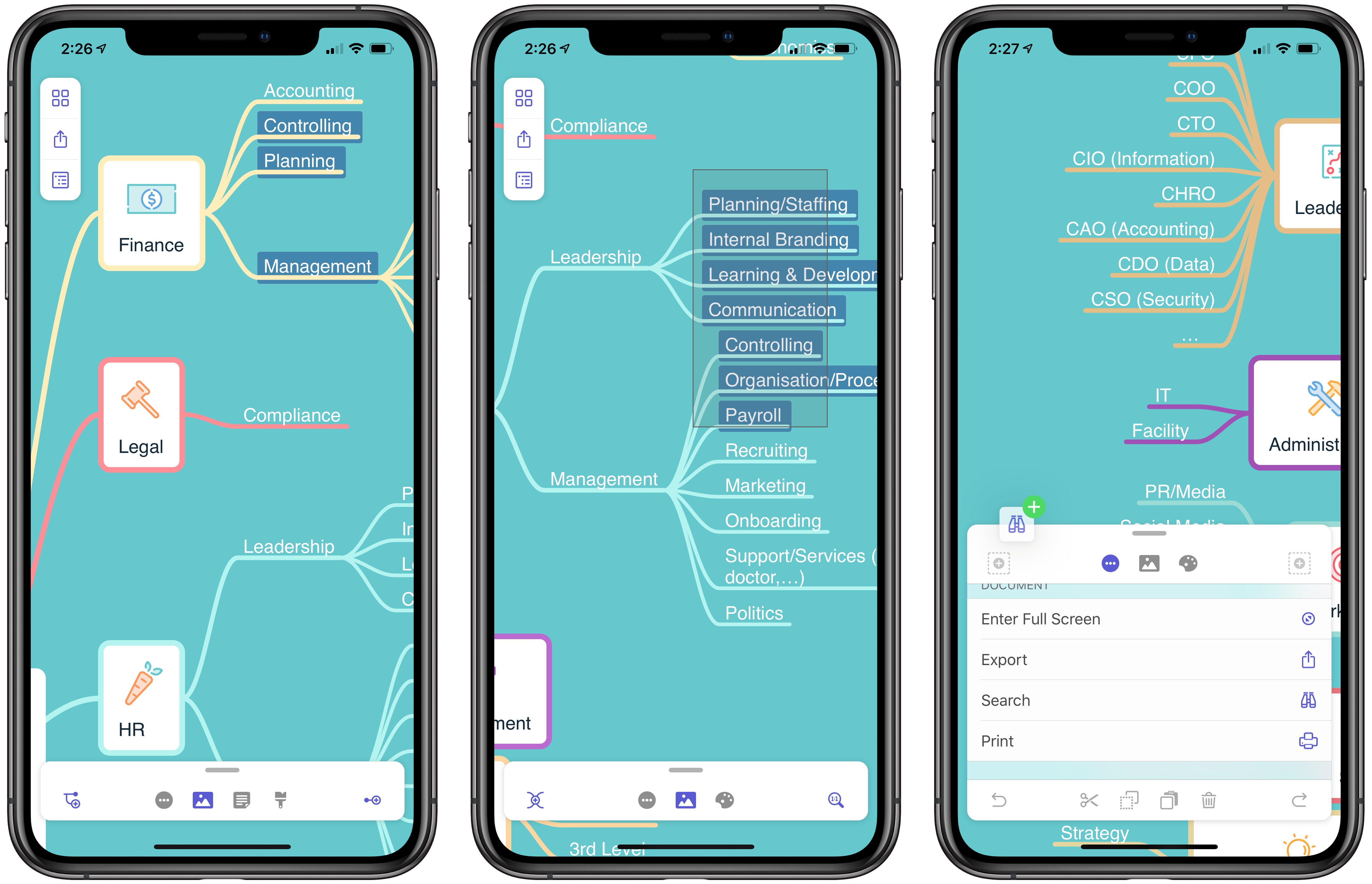 There are two main ways to use multi-select on iOS: you can select a group of nodes in close proximity by tapping and holding at any point on your map, then dragging to reveal a very Mac-like selection box; alternately, if you need more control of which nodes are selected, you can similarly tap and hold on the map, but then rather than dragging, instead use a second finger to tap the various nodes you want to select. Both of these gestures are very Mac-like, yet they work surprisingly well on the touch-first iPad and iPhone.

Another efficiency upgrade in MindNode 6 is the ability to customize the quick actions in the Action panel to your particular needs. The panel includes two default quick actions, one on either side of the panel’s top row, and to swap out those actions for something different, all you have to do is locate the desired action inside the panel’s list of options, then use drag and drop to pick up the action and place it on the quick action spot of your choice. It’s a really simple gesture that, again, models the Mac in a way – in this case by evoking customization of the Touch Bar. My only complaint is that you’re limited to two quick action slots, even though it seems like the panel offers enough space that another two slots could easily be added without making things overly crowded. 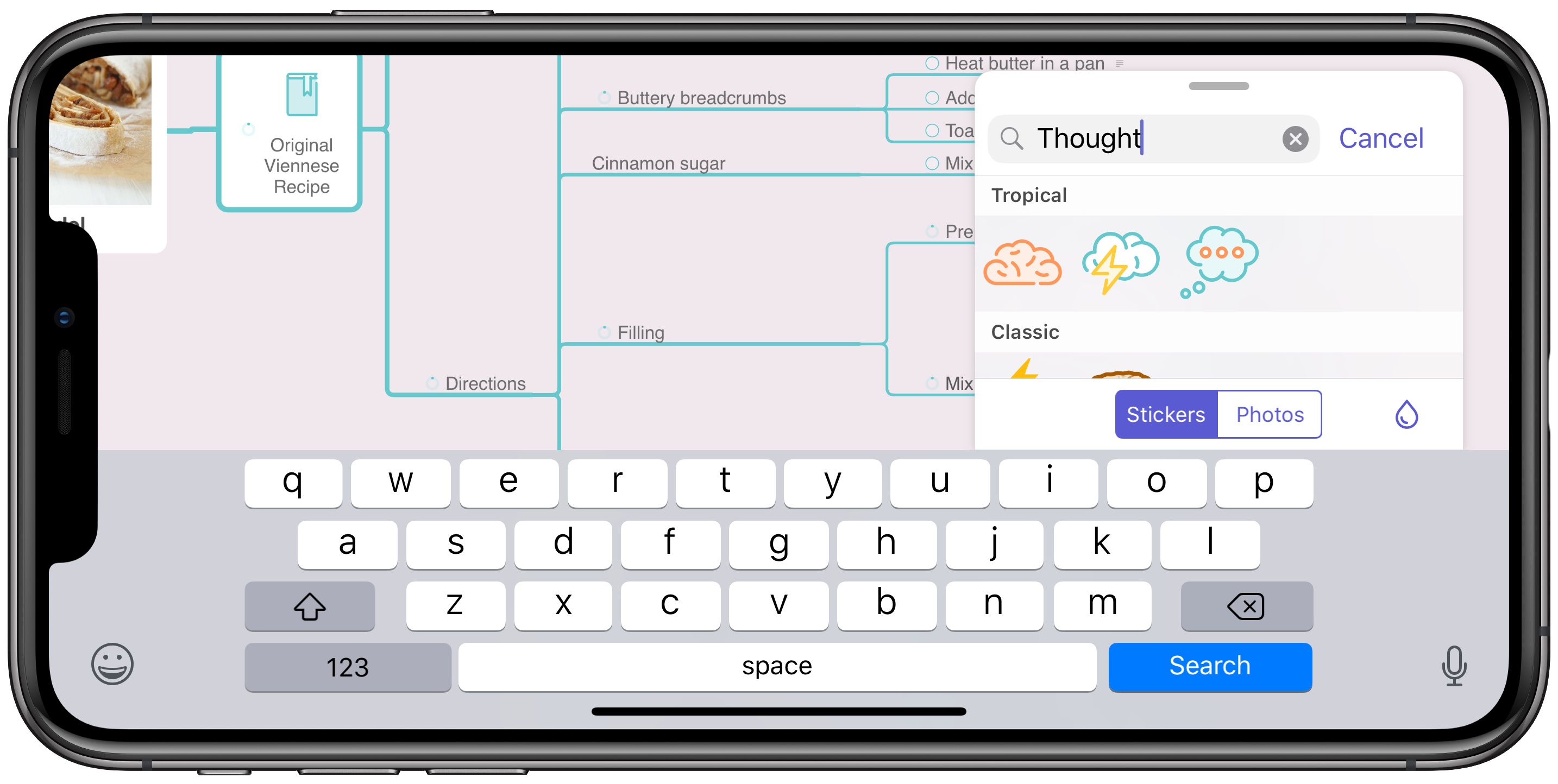 One final change that speeds up a common function in the app is that MindNode now offers a search function for its sticker database. Accessed from the top of the sticker menu inside the Action panel, search makes it easy to find what you’re looking for out of the over 250 available stickers.

MindNode 6 is the kind of release aiming to please existing users, not necessarily win over new ones. If version 5 didn’t work for you, it’s unlikely anything will be different now. However, for current MindNode users, the app you love now offers more power and flexibility than ever before. Iterative, feature-adding updates like this run the risk of cluttering the core app experience, but that’s not at all the case here – every addition serves as a meaningful enhancement that, rather than cluttering the app, instead makes it more pleasant to use.

More than a top-tier mind mapping tool, MindNode’s last two major updates have proven it an app on the cutting edge of iOS design and technologies. Just as version 5 integrated some of the best of Apple’s modern iOS work, such as panels, the document browser, and drag and drop, this update puts powerful external display and multi-select features in your hands – not in a haphazard way, but in one that feels fresh yet native.

If you’re in the market for a mind mapping app, I cannot recommend MindNode more highly. Version 6 is a free update for existing users; new users can download MindNode free for both iOS and the Mac, with a two-week trial available before paying a one-time In-App Purchase to unlock full functionality.