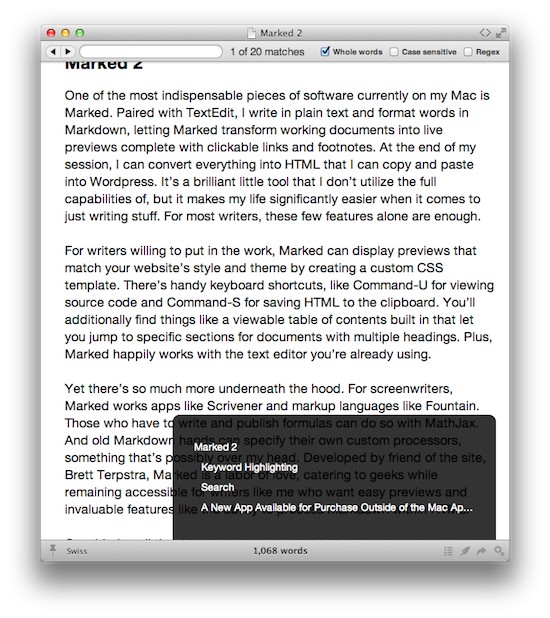 One of the most indispensable pieces of software currently on my Mac is Marked. Paired with TextEdit, I write in plain text and format words in Markdown, letting Marked transform working documents into live previews complete with clickable links and footnotes. At the end of my session, I can convert everything into HTML that I can copy and paste into WordPress. It’s a brilliant little tool that I don’t utilize the full capabilities of, but it makes my life significantly easier when it comes to just writing stuff. For most writers, these few features alone are enough.

For writers willing to put in the work, Marked can display previews that match your website’s style and theme by creating a custom CSS template. There’s handy keyboard shortcuts, like Command-U for viewing source code and Shift-Command-C for saving HTML to the clipboard. You’ll additionally find things like a viewable table of contents built in that let you jump to specific sections for documents with multiple headings. Plus, Marked happily works with the text editor you’re already using.

Yet there’s so much more underneath the hood. For screenwriters, Marked works with apps like Scrivener and markup languages like Fountain. Those who have to write and publish formulas can do so with MathJax. And old Markdown hands can specify their own custom processors… something that’s possibly over my head. Marked is a labor of love, catering to geeks while remaining accessible for writers like me who want easy previews and invaluable features like the ability to process Markdown within source code.

Considering all that Marked already does, Marked 2 is a huge release that adds a ton of new features for editor, bloggers, and people who would rather write in Markdown than open Microsoft Word. Instead of running through every new feature, I’d rather focus on the two that have the greatest impact on me. Keyword highlighting makes self editing much easier, while new searching features let me skip past the results I don’t need to see.

Keyword highlighting is an invaluable new tool that helps me both proof my writing and avoid careless repetition of unneeded words. There’s multiple facets to it, and Brett Terpstra was even kind enough to include his own dictionary of sinful words and phrases that he likes to avoid. It’s all completely customizable of course, and it starts with the Proofing tab in Marked’s preferences.

Keywords fall into four main categories, with the first three being for obvious catch-all avoidance words. Avoided words show up in previews as red, words that you’d prefer to use an alternate for show up in purple, and words that don’t fall into either category will show up as blue or green. You can delete everything and enter your own list of words from scratch if you’d like, as you have the option of later recovering Brett’s default list.

When describing software, it’s easy to fall into the trap of using adjectives like “amazing” to describe a feature that might be only be subjectively useful to the reviewer. It’s a word I’ve admittedly overused a lot in my previous works, and its one I try to write around or avoid. With Marked 2, I can add this word and others like it to its built in dictionary, and it will highlight the word in the preview after I type it. It’s such a simple thing, but it’s remarkably helpful since I don’t have to be conscious of it. In effect, Marked becomes like an editor that’s always on hand, never busy in a meeting, and more than willing to bluntly criticize what you’ve written.

Highlighting can also be useful for naming conventions, like differentiating between iPhone 5S and iPhone 5s. This is where I like to use the blue (other) highlighter, or the green (temporary keywords) if the document contains lots of unique terminology.

Temporary keywords can be added on-the-fly by clicking on the leaf icon in Marked’s toolbar. The drawer that pops up is like a little keyword highlighting command center, revealing a legend that describes what the highlights mean, a small text area off adding temporary keywords, and switches and buttons that turn highlighting on and off, individually disable colors, and apply the temporary keywords list to the preview. 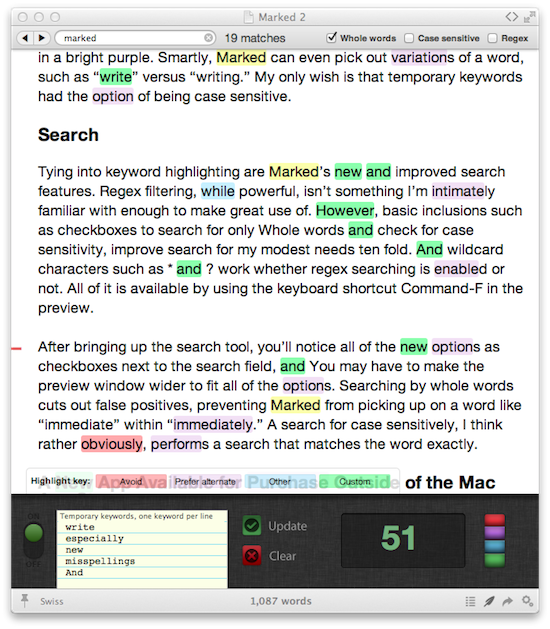 Adding temporary keywords becomes even more useful when you Visualize Word Repetition, a feature found under the Preview menu and gear icon. Marked’s word repetition feature will highlight repeated words in bold, and clicking on them will darken the preview and single them out in a bright purple. Smartly, Marked can even pick out variations of a word, such as “write” versus “writing.” My only wish is that temporary keywords had the option of being case sensitive.

Tying into keyword highlighting are Marked’s new and improved search features. Regex filtering, while powerful, isn’t something I’m intimately familiar with enough to make great use of. However, basic inclusions such as checkboxes to search for only Whole words and check for case sensitivity, improve search for my modest needs ten fold. And wildcard characters such as * and ? work whether regex searching is enabled or not. All of it is available by using the keyboard shortcut Command-F in the preview.

I can’t cover everything in great detail, mostly because there’s just so much new stuff, but below you’ll find a brief overview of the new features included in today’s major update.

Marked 2, with its new shiny icon, won’t be available to purchase in the Mac App Store. Marked will remain in the Mac App Store at a reduced price, and continue to receive maintenance updates for those who purchased the app there. Marked 2 can be purchased for $11.99 from marked2app.com, and there’s a free trial available to those checking it out for the first time. If you used Marked as a proofing tool, you’ll want today’s latest update.