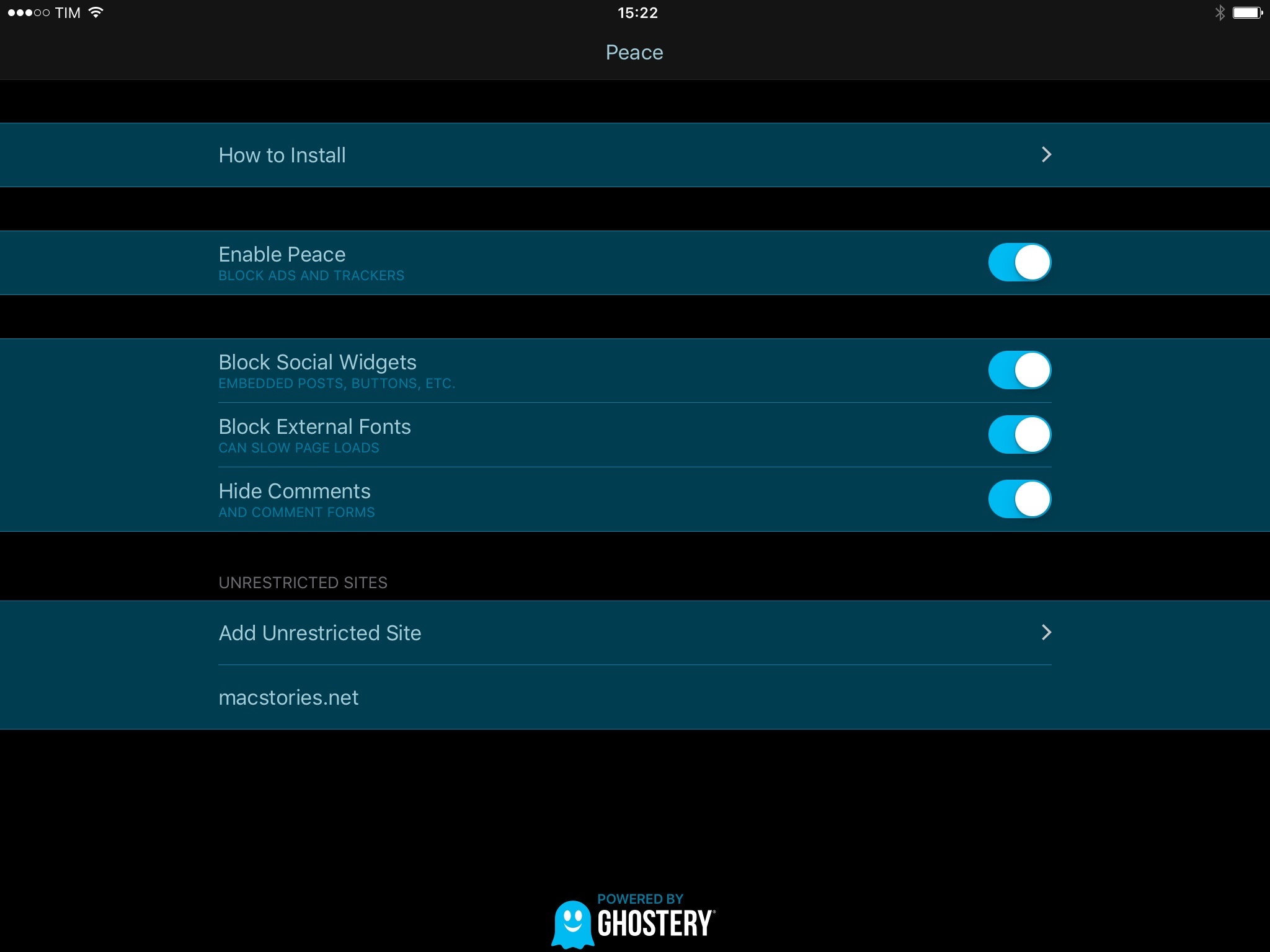 Among the hundreds of Content Blockers for iOS 9 launching today on the App Store, one that deserves attention is Marco Arment’s Peace.

Available at $2.99 for the iPhone and iPad, Peace is a Content Blocker which exclusively licenses the official Ghostery database to block trackers and ads, but also social widgets, external fonts, and comment forms.

Already popular on the desktop thanks to its extension, Ghostery helps visualize the number of requests that happen behind the scenes when visiting webpages on a desktop web browser, giving users a way to block those connections to enjoy a faster, cleaner, more private web.

While on iOS 9 Peace won’t be able to monitor and visualize specific requests due to Apple’s safe design of Content Blockers, it’ll offer access to the full set of 2,000 rules in the Ghostery database, which can block the most common types of trackers and ads from the web – keeping them updated as the Ghostery team discovers new trackers every day.

The big advantage of Peace over most Content Blockers based on crowdsourced blocklists, in fact, is that the Ghostery database is constantly optimized for the latest trends in web tracking and its performance is valued by avoiding duplicate rules and purging old entries which are no longer relevant. In my tests with a dozen of Content Blockers based on open-source filters (such as EasyList and EasyPrivacy), I often came across databases that included over 5,000 (and sometimes 7,000) rules collected from various sources and repackaged in a single list. While that’s an impressive feat from a statistical standpoint, performance ultimately suffers: when Safari needs to evaluate too many rules, potential time savings turn into possible slowdowns, removing the benefit of installing a Content Blocker in the first place.

What Peace promises is to keep a more lightweight but still comprehensive set of rules, mantained by Ghostery (a company whose business model is keeping an updated database of block rules) and available as a native app with some great touches. As Marco writes:

Whenever I’d test a hosts file’s data against Ghostery’s, I kept finding the same thing: Ghostery blocked more trackers and had fewer compatibility problems, with a reasonably sized blocklist of about 2,000 entries.

This isn’t surprising: Ghostery is a well-staffed company with much broader reach and much better tracking data than small groups of volunteers can usually achieve, with a business model that’s ethical, sustainable, and aligned with our interests rather than advertisers’.

Peace the app is a list of toggles to enable blocking of trackers and ads, external web fonts, comment forms, and social widgets (share buttons, embedded posts, etc.). Once activated in the app and in iOS’ Settings, Peace will start blocking content in every instance of Safari and Safari View Controller across the system. 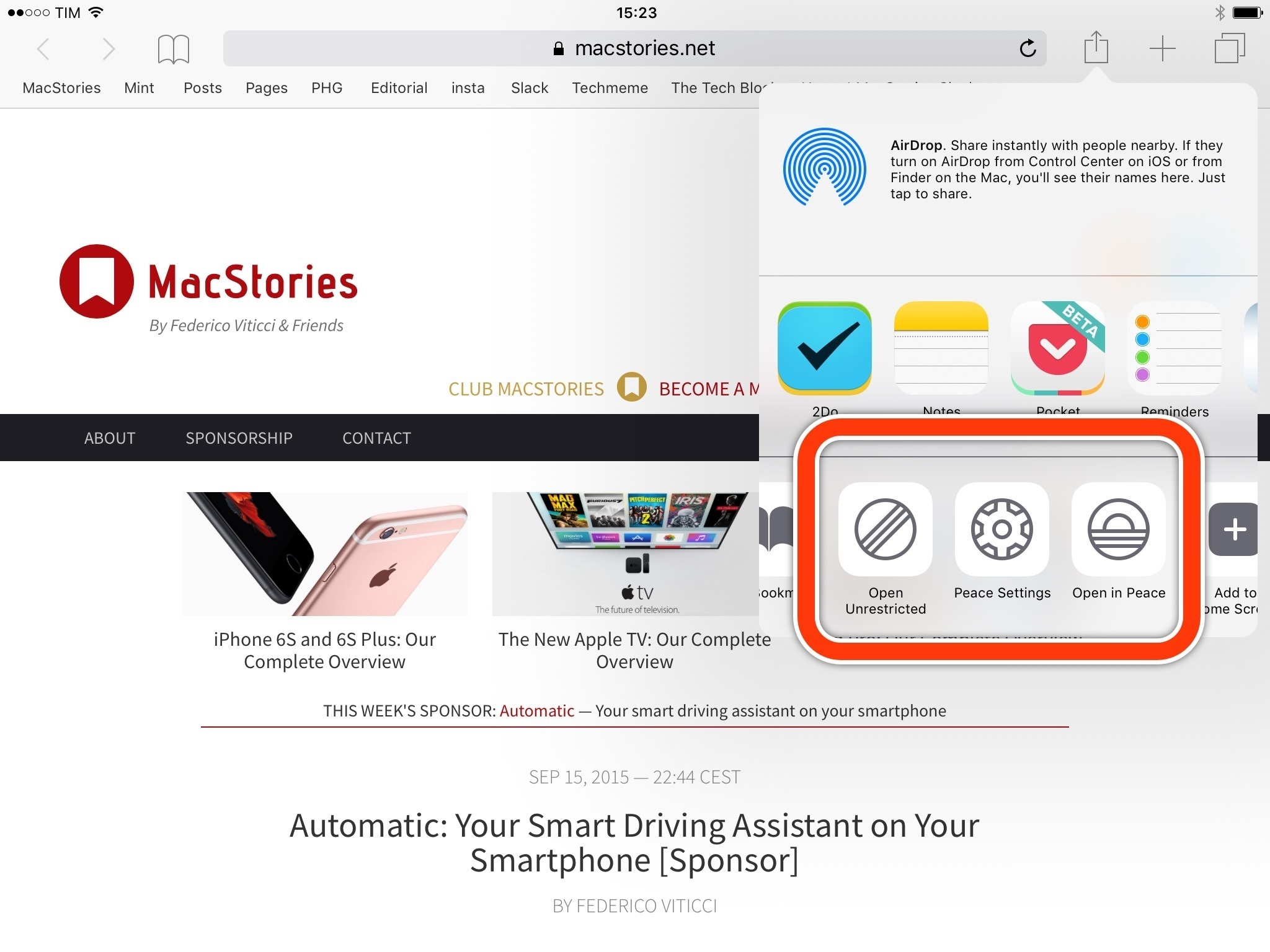 In using Peace on my iPhone and iPad, I found a few great details worth mentioning. Peace offers three action extensions: Open Unrestricted, Open in Peace, and Peace Settings. The latter is the simplest one, as it lets you open the app’s preferences from anywhere on iOS and add any domain to a whitelist so rules will be bypassed for that website (a good way to support your favorite sites on the web). 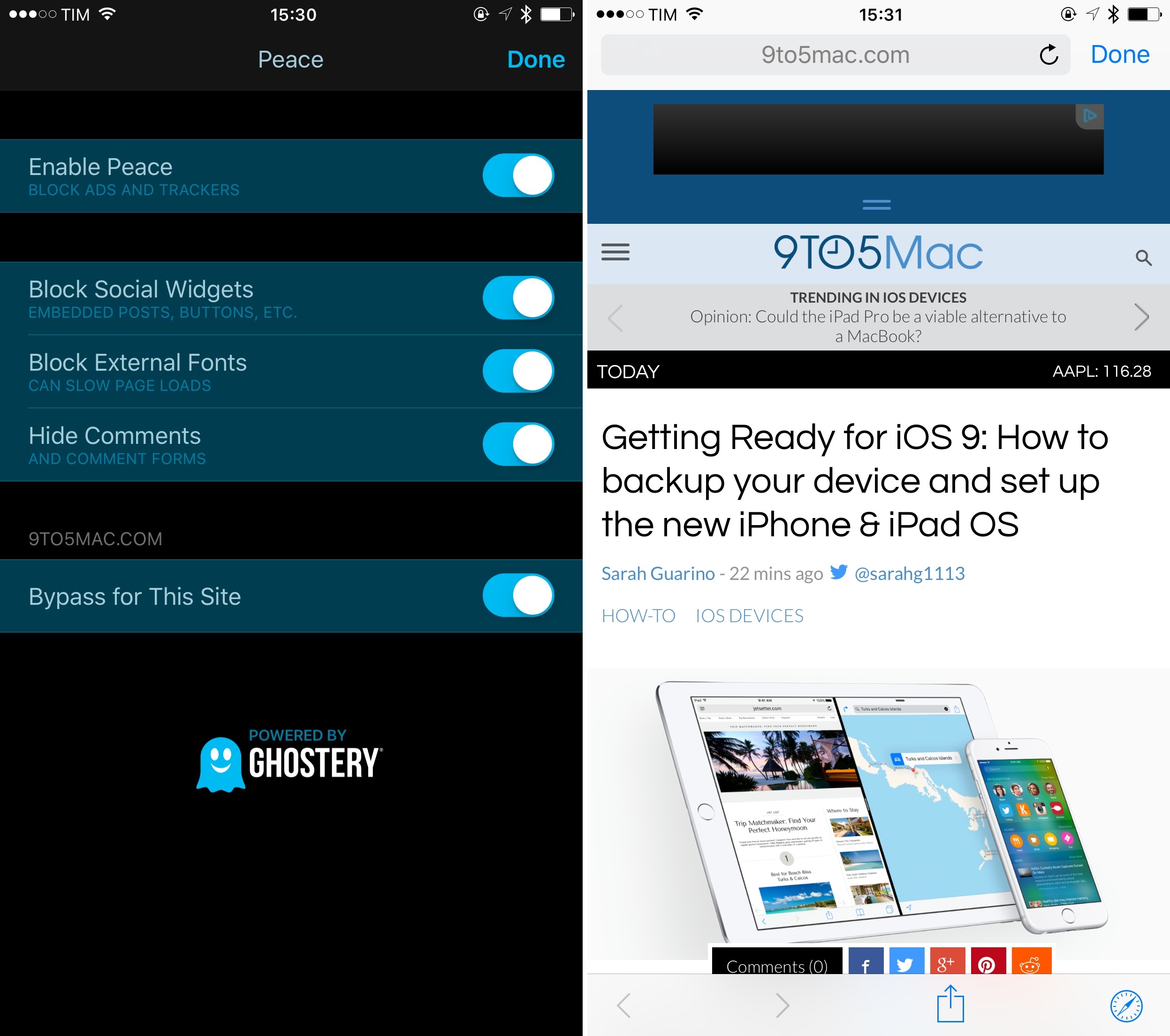 Bypassing a website and opening it in Unrestricted mode with Safari View Controller from Peace. 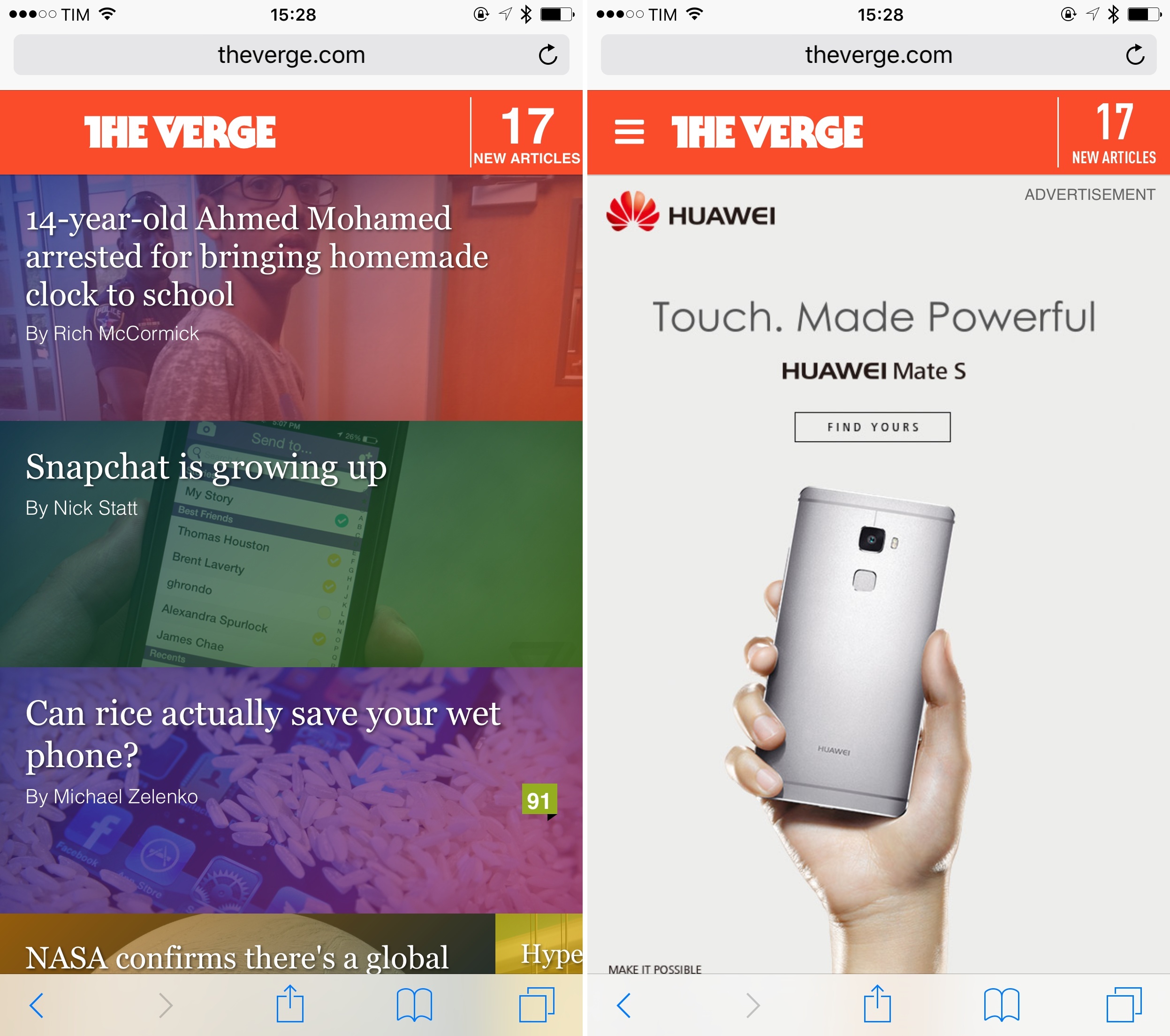 With and without Peace. 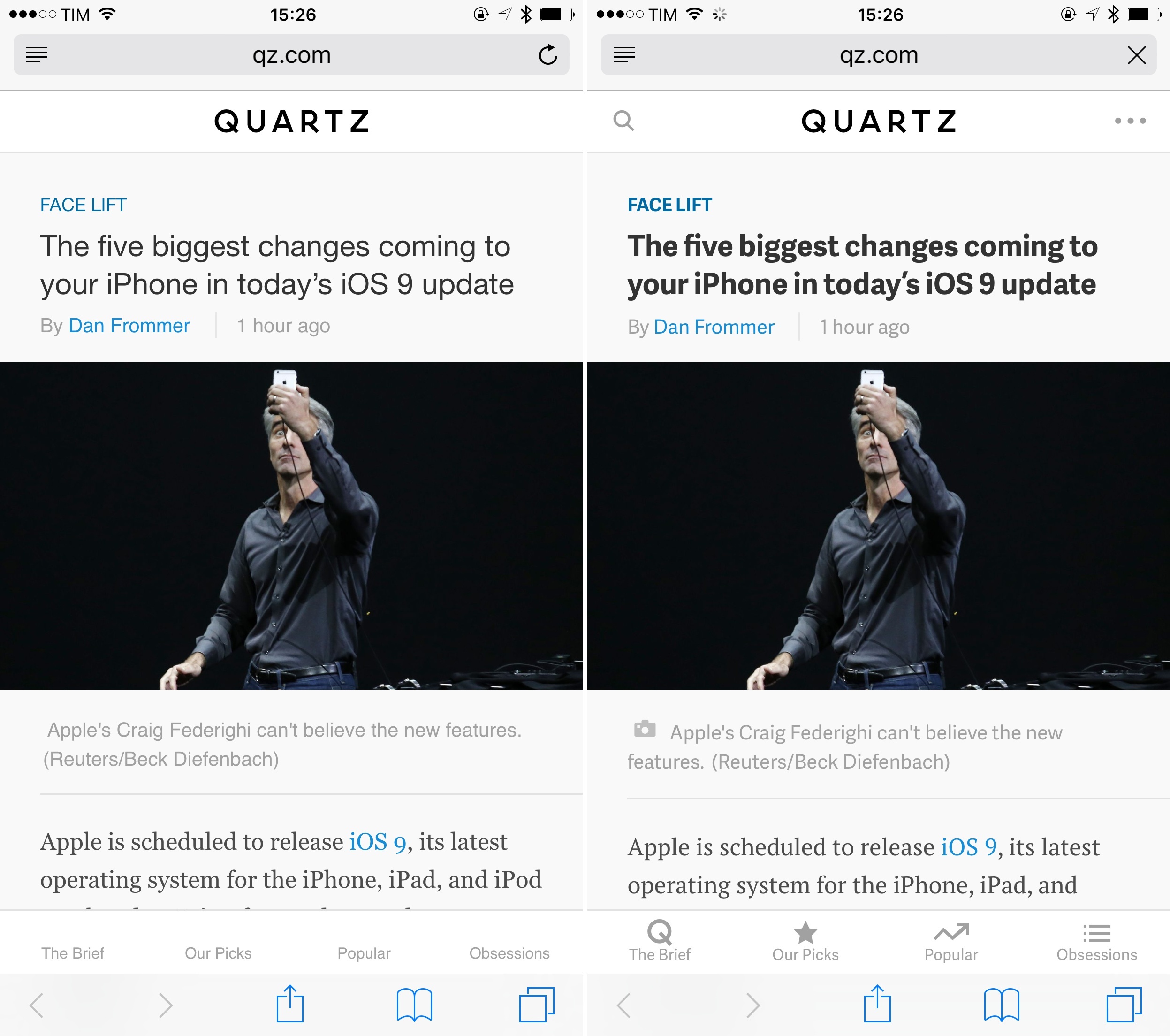 With and without Peace.

In my tests, Peace (and the Ghostery database) delivered on the promise of a faster and cleaner web by blocking trackers, ads, comments, and other social cruft I don’t want to see (or be slowed down by) when browsing the web. The number of blocked resources and page size savings was comparable to what I observed in my iOS 9 review, if not better for some websites. Unlike other Content Blockers I tested, Peace’s smaller but more effective blocklist resulted in faster page load times – a testament to Ghostery’s continuous optimization work in the backend.

Peace’s biggest advantage is its exclusive support for the Ghostery database. If you use Ghostery on the desktop and trust the company to provide a reliable blocklist with good performance in mind, Peace is your only option on iOS 9. But the app is also more than an exclusivity deal: thoughtful touches and clever ideas such as extensions, Safari View Controller, and the ability to bypass sites show that Arment wanted to build a great Content Blocker first, and sign a good deal second.

I’m only keeping two Content Blockers on my iPhone and iPad: 1Blocker, for custom CSS overrides, and Peace, for its Ghostery blocklist and extensions. Peace is the Content Blocker to have on iOS 9, and it’s available at $2.99 on the App Store.