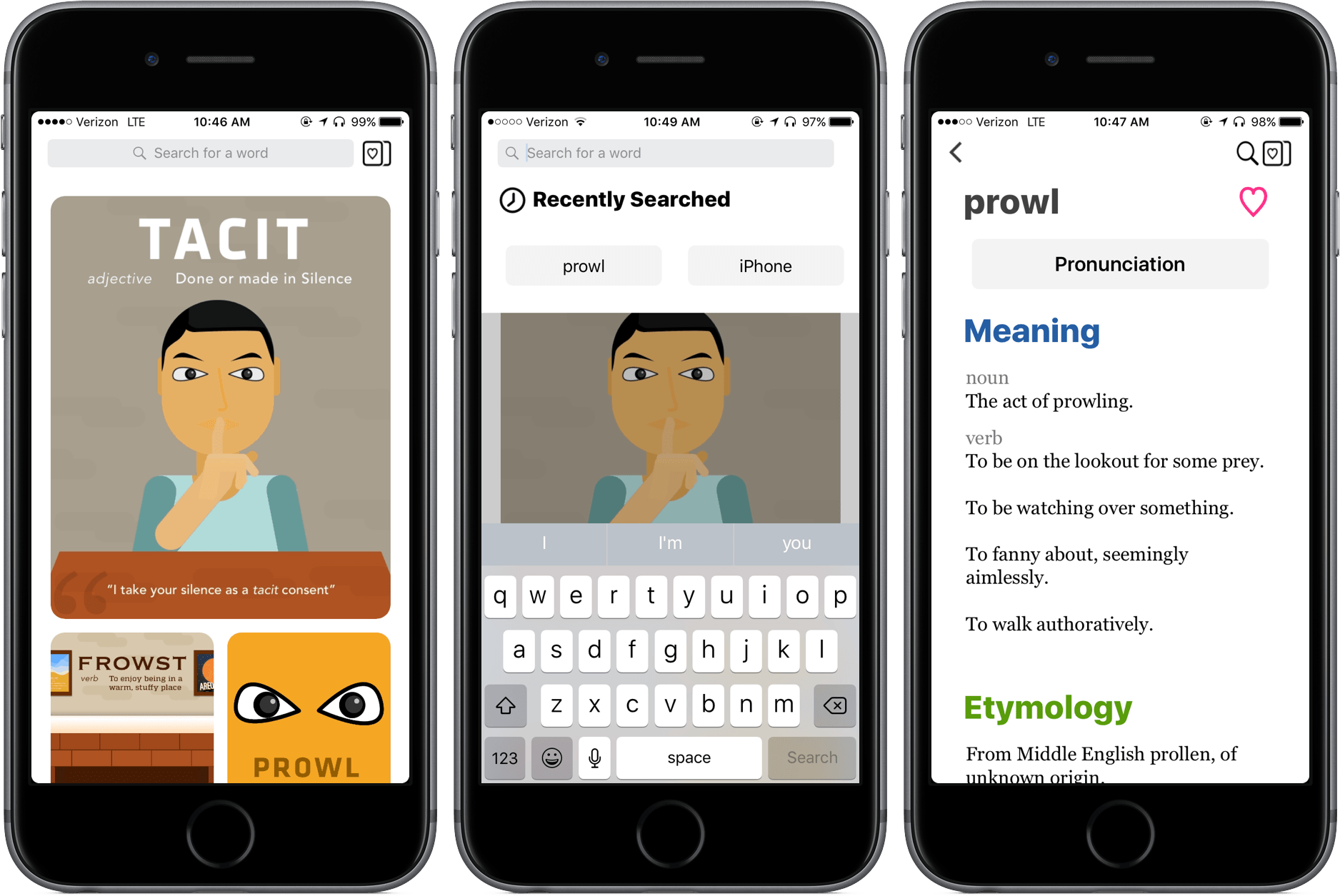 When considering a traditional dictionary, the words “fast” and “beautiful” don’t come to mind; even our digital dictionaries, sometimes coming in the form of iOS’ Look Up feature when highlighting a word, don’t do a great job of looking good, providing all the relevant information, and appearing in enough time to make it worth the process.

With LookUp, I’ve found things to be different – it’s a dictionary app built on convenience, design, and lots of information.

As a dictionary app, LookUp won’t catch you by surprise with any flashy, unnecessary features. Instead, I’ve been delighted by the details, finding enjoyment out of shortcuts to Wikipedia articles, intricately designed illustrations, and quick access to pronunciations.

Once you search a word, you’ll get a minimalistic page with a definition, a button for the pronunciation, and the word’s etymology. In some instances, a Wikipedia article will follow, but this is dependent on what you’re searching; for example, “tacit” didn’t link to Wikipedia, but “bokeh” did.

As a whole, LookUp provides the right amount of information without overloading you with unwanted text. With the hierarchy of word, photo, meaning, etymology, Wikipedia, the important stuff comes first, then draws you down if you become more interested.

All of this is assembled in a clearly Apple-inspired package, one that unashamedly draws design cues from Health.app. Regardless of where inspiration lies, LookUp is well designed, clean, and without much complexity. With the addition of the impressive art in the “word of the day” section on the home screen, the app’s design shines. 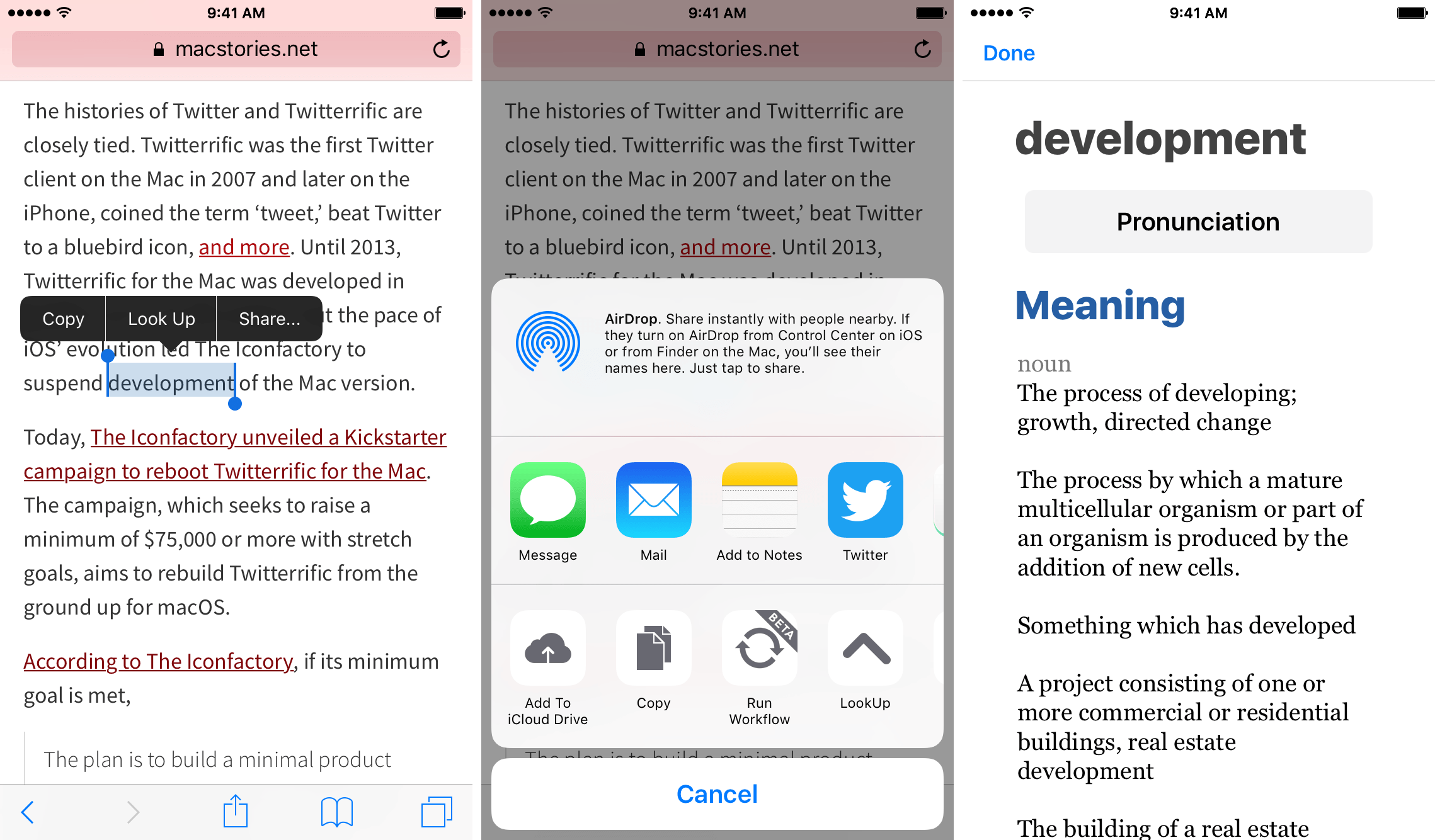 Most of the time, however, you’re not looking to stop what you’re doing to search for a word in another app. For the times you simply want to get a glance at what a word means, LookUp has a built-in extension that can be triggered from the system-wide Share menu once you’ve highlighted a word.

By using the share extension, you get all the benefits of LookUp – the design and extensive definition and etymology information – without having to stop reading. This is my favorite way to use LookUp and I would highly recommend using the extension, rather than jumping between apps. 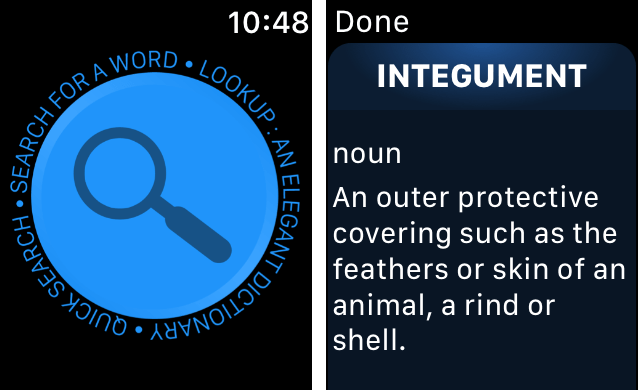 LookUp also sports an Apple Watch app that will take scribbles or audio inputs and provide you a definition. For the most part, I don’t think this will prove to be too useful (who wants to use a watch dictionary?), but it may work for some people in need of a quick definition.

LookUp is far and away my favorite dictionary app I’ve used. While some of its functionality clashes with Apple’s Look Up feature, what it offers in simplicity and effectiveness differentiates itself from the stock option.

At $2.99, LookUp is worth its price. If you are occasionally in need of a dedicated iOS dictionary, LookUp will satisfy your needs well.

You can find LookUp in the App Store for $2.99 as a Universal app.