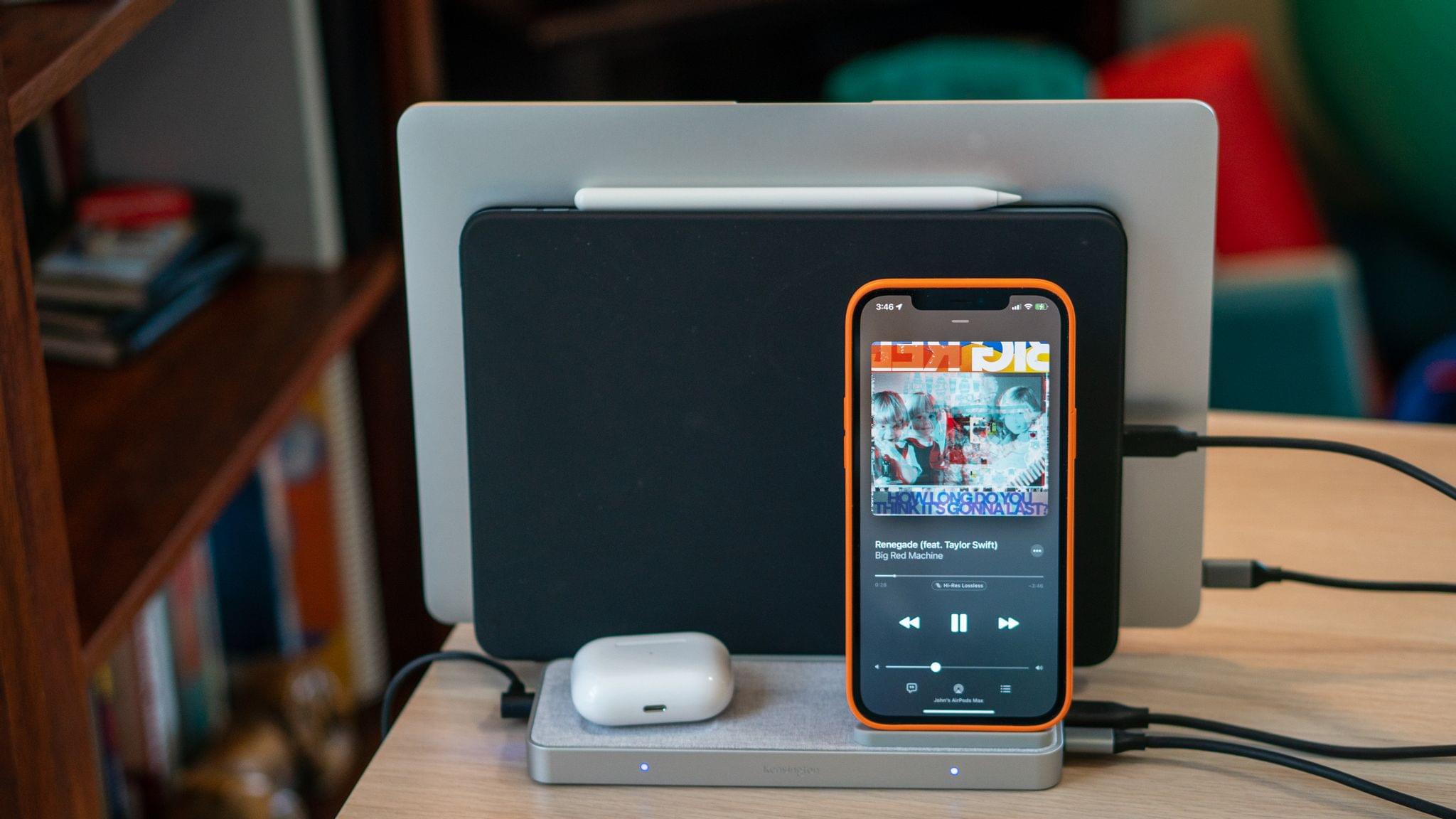 Today, Kensington released the StudioCaddy, a $179.99, two-piece charging station and device organizer for Apple devices. Kensington sent me a review unit, which I’ve been using for about a week, so I thought I’d share my first impressions.

The StudioCaddy has a unique two-piece design. One half features Qi charging stations for an iPhone and AirPods, plus USB-A and USB-C charging ports. The other half is a weighted stand with slots to hold a Mac laptop and iPad vertically. The two parts can be used separately or connected magnetically. 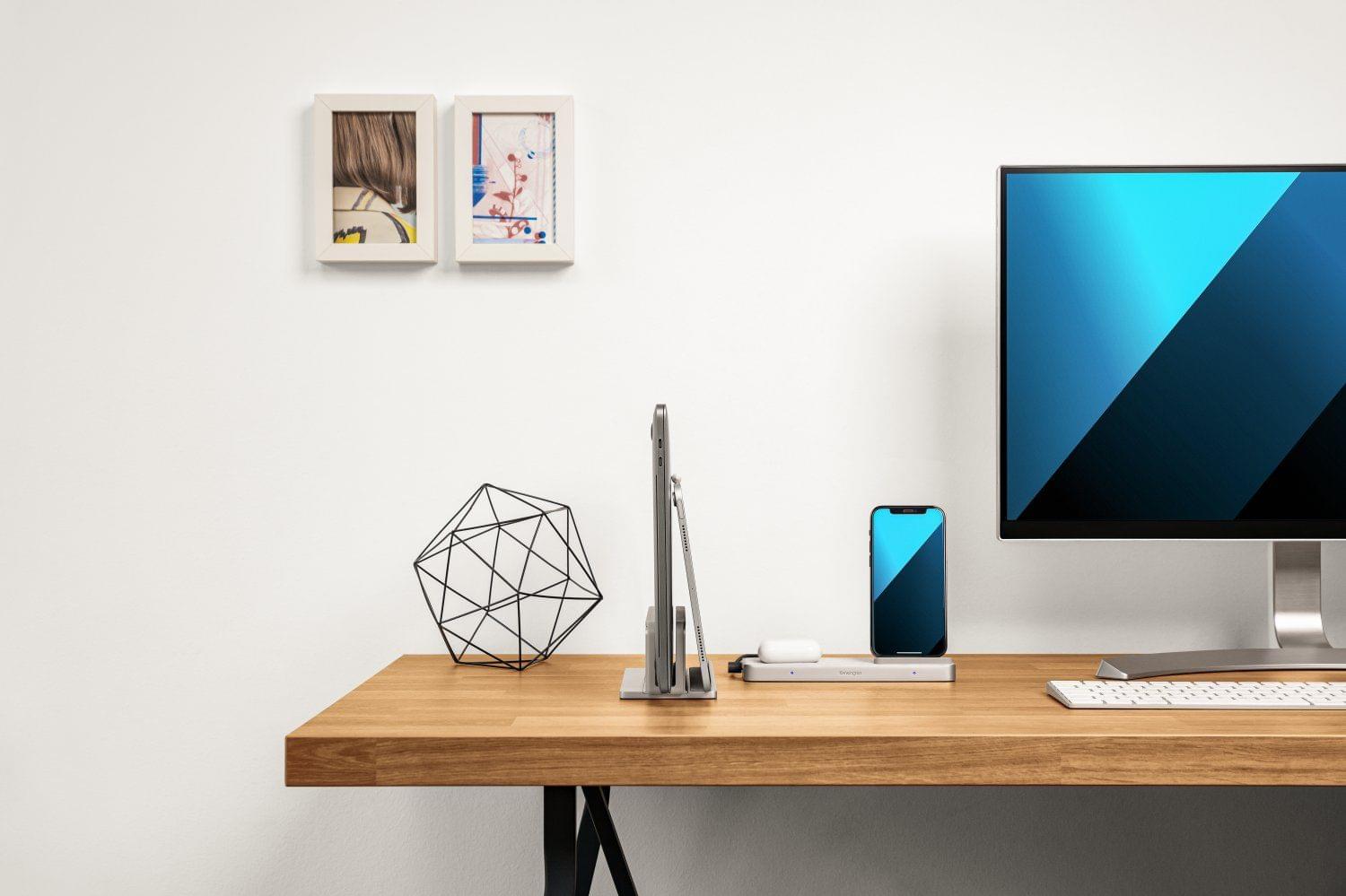 The StudioCaddy can be used as one unit or separate pieces connected magnetically. Source: Kensignton.

An iPhone rests nearly vertically against a fabric-covered Qi charging pad that delivers 7.5W of power in either portrait or landscape orientations. The iPhone is held in place by a grippy rubber strip along the base of the stand. Kensington includes a second strip in the box that can be substituted for the one that is pre-installed for use with smaller iPhones like the iPhone SE and 12 mini.

The second Qi charger built into the stand is a divot on which you can place AirPods to charge. On the left side of the stand is a power button and the attachment point for the power cable, which comes with replaceable wall plugs for North American, UK, EU, and Australian electrical outlets. On the right side are USB-A and USB-C charging ports that deliver 12W and 20W of power, respectively. The power button is a nice touch, allowing users to prevent power from being delivered to fully charged devices.

The Mac and iPad holder attaches to the back of the AirPods and iPhone charger magnetically with a connection that is strong enough to keep them aligned and held together on a desk as you take devices on and off the unit throughout the day. There aren’t any electronics in the Mac and iPad holder. Instead, the USB-A and USB-C ports on the side of the iPhone and AirPods charger can be used to charge a Mac and iPad, although relatively slowly given the stand’s power output. 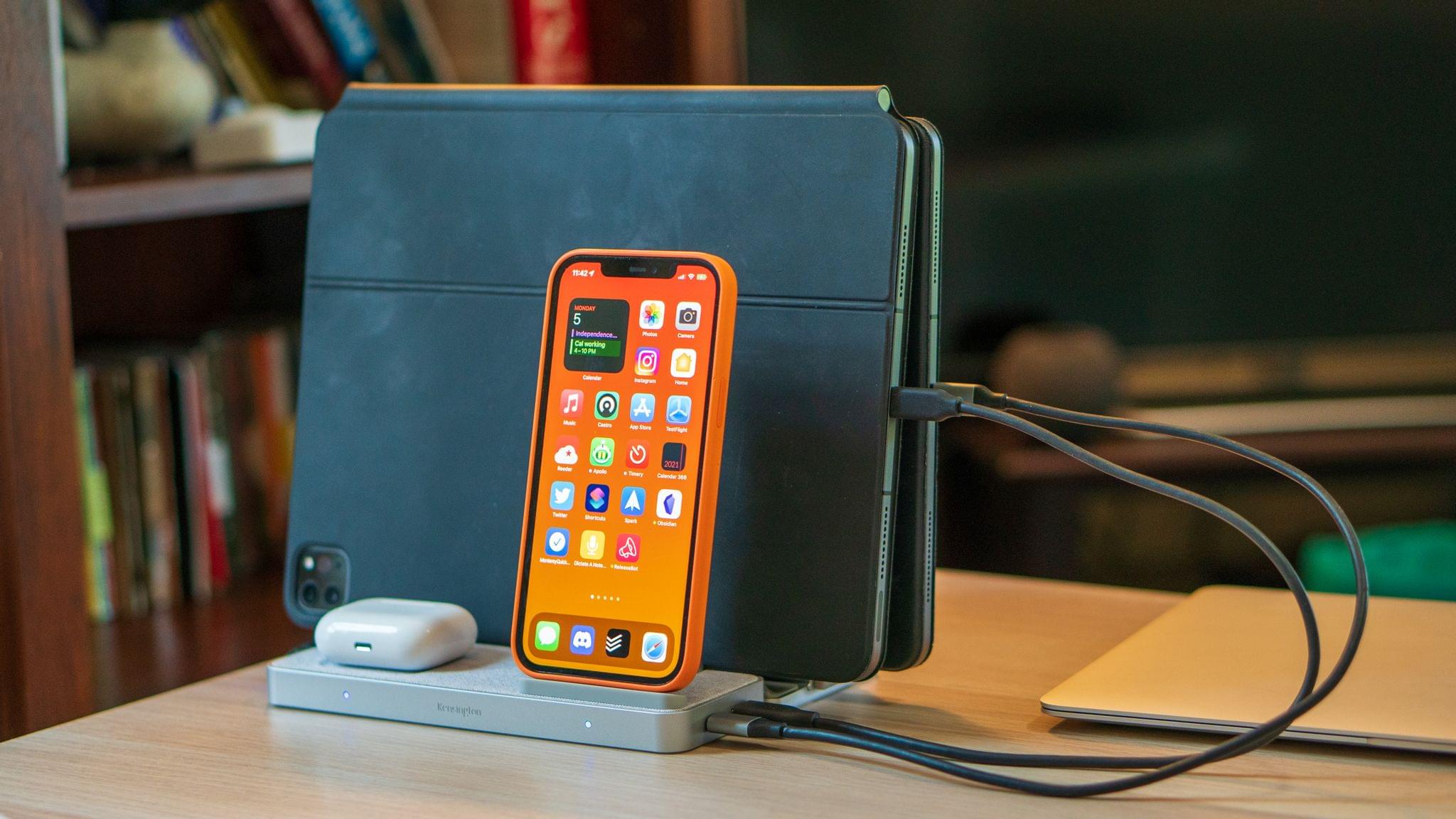 Two iPads can fit in the StudioCaddy too.

The Mac and iPad holder can accommodate a Mac the size of the 13” MacBook Air to the 16” MacBook Pro. The device also works with any iPad in landscape or portrait mode, doubling as a stand for viewing content on the iPad whether or not it’s simultaneously charging. You can also use a closed and charging Mac in clamshell mode connected to an external display as it sits in the StudioCaddy, which is handy. If you prefer, two iPads fit in the StudioCaddy too. Kensington advertises the StudioCaddy as capable of charging an Apple Watch, which is true if you supply a Watch charger and plug it into the unit’s USB-A or USB-C ports, but be aware that there isn’t a dedicated charging pad or spot for a Watch. 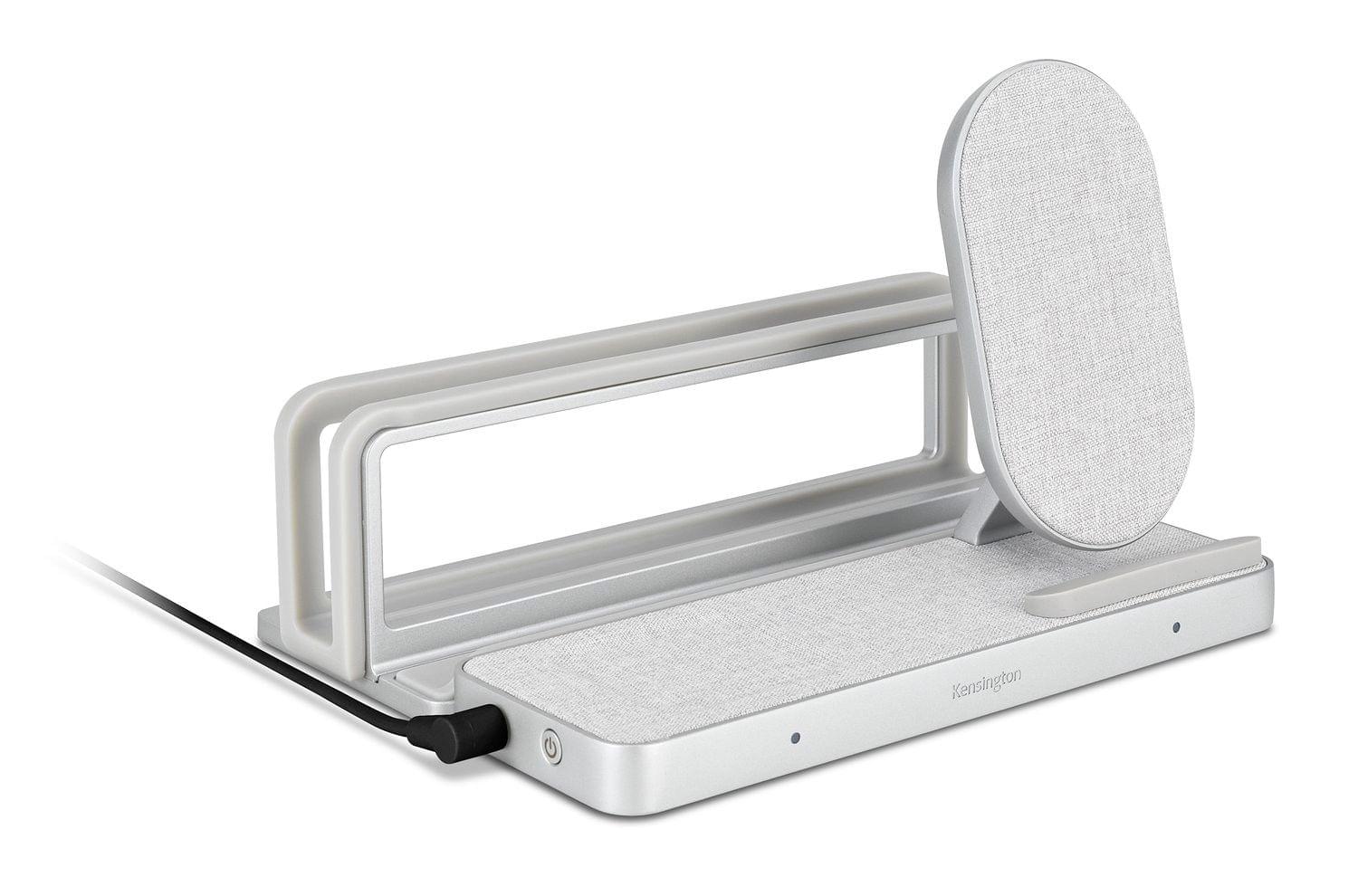 Close-up of the StudioCaddy. Source: Kensington.

I like the space-saving design of the StudioCaddy a lot. I’ve been in the process of rearranging my home office setup and being able to charge and organize my MacBook Air, iPad Air or 12.9” iPad Pro, iPhone, and AirPods Pro in one spot that doesn’t take up a lot of desk space has been useful. The StudioCaddy also looks nice sitting on a desk with its solid aluminum base, grey rubber accents to protect your devices, and neutral-colored fabric covering the Qi chargers.

I’m not as excited about the power delivery of the StudioCaddy. Apple includes a 20W charger in the box with iPads, but they can fast-charge at up to 45W, and the MacBook Air comes with a 30W charger. In contrast, the USB ports on the StudioCaddy deliver 12W and 20W. For the biggest Mac laptops and iPads, the slower charging speed is noticeable. The iPhone Qi pad charges at just 7.5W, which is a little anemic, too, although standard for Qi chargers that don’t support MagSafe’s 15W power delivery. For $180, it would have been nice to see custom-length Lightning and USB-C cables that match the design of the unit included with the StudioCaddy too.