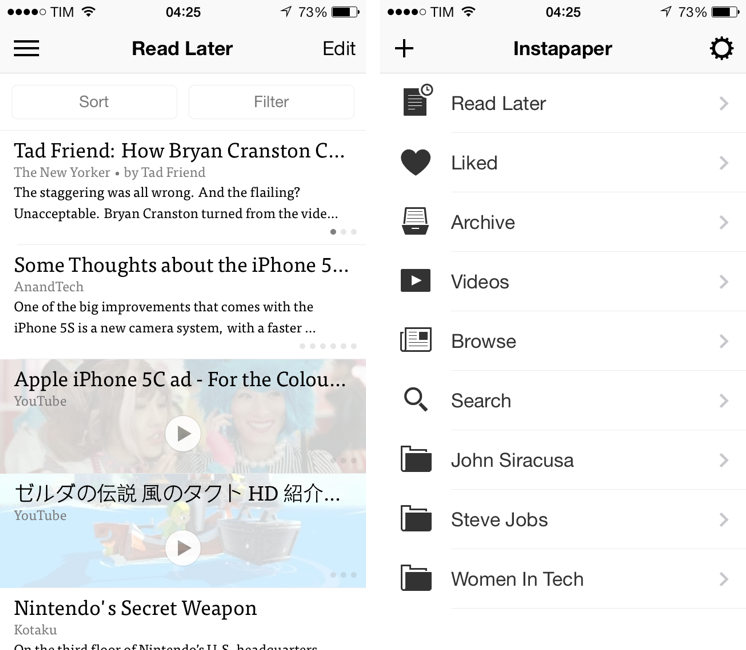 The first major update since the app was sold by original founder and developer Marco Arment to Betaworks earlier this year, Instapaper 5.0 has been released today on the App Store as a free update for existing owners of the app. Instapaper 5.0 doesn’t add any new major functionality to the app, which is still largely similar to the version 4.0 that was first released two years ago. Betaworks made the app ready for iOS 7, polished the interface, and added some new minor functionalities that, however, nicely complement the reading experience. I’ve been testing Instapaper for the past week on my iPhone 5 and iPad mini running the iOS 7 GM seed.

In terms of design and overall layout, very few things have changed: the icon has been slightly tweaked, there’s a new splash screen, and the iPhone app has a cleaner main screen. Some of the animations have been reworked, toolbar icons are new, and the Settings’ design has been cleaned up to match the new iOS 7 style. Changes are even harder to spot in the iPad app, which, contrary to recent expectations, hasn’t been redesigned to be similar to Betaworks’ redesign of Instapaper on the web. 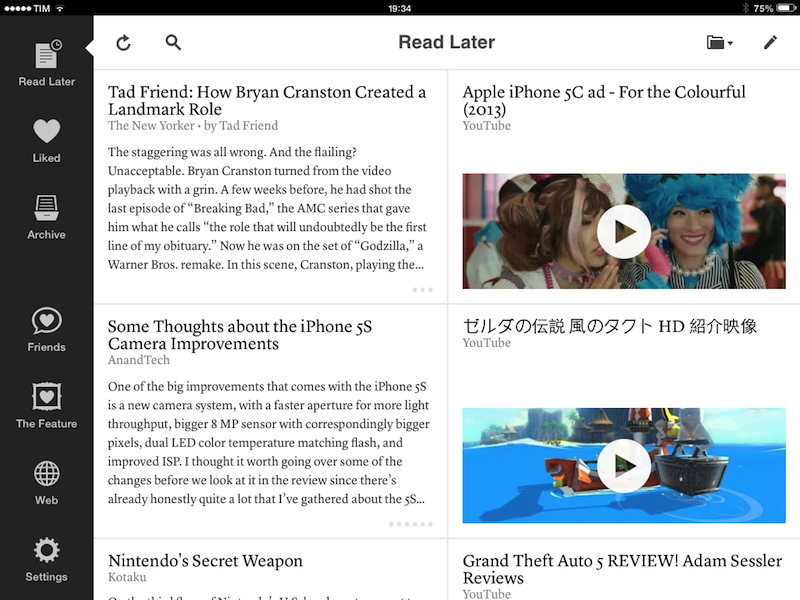 To my surprise, Instapaper 5.0 doesn’t implement the new background app refresh feature of iOS 7, as it still relies on a location workaround that Arment implemented last year. According to Betaworks, they’re waiting for user adoption of iOS 7 to increase before adding iOS 7-specific features, but I still think that, like other apps on the App Store this week, they could have supported background app refresh while still keeping a version of the app for iOS 5 and iOS 6 users. Once you’ve experienced the convenience of background app refresh, it’ll be hard to justify its absence in Instapaper 5.0, and I hope that Betaworks will add it as soon as possible.

Aside from localization in 13 languages, improvements to the parser, and a tweaked Sepia theme, Instapaper 5.0 comes with new sorting and filtering abilities, as well as a new tab for videos. Historically, Instapaper never supported videos saved for later as well as Pocket, but Instapaper 5.0 takes some timid steps towards what could become deeper integration with Vimeo and YouTube. There’s still no custom player, but videos get better inline previews and they can be watched in a separate area of the app. 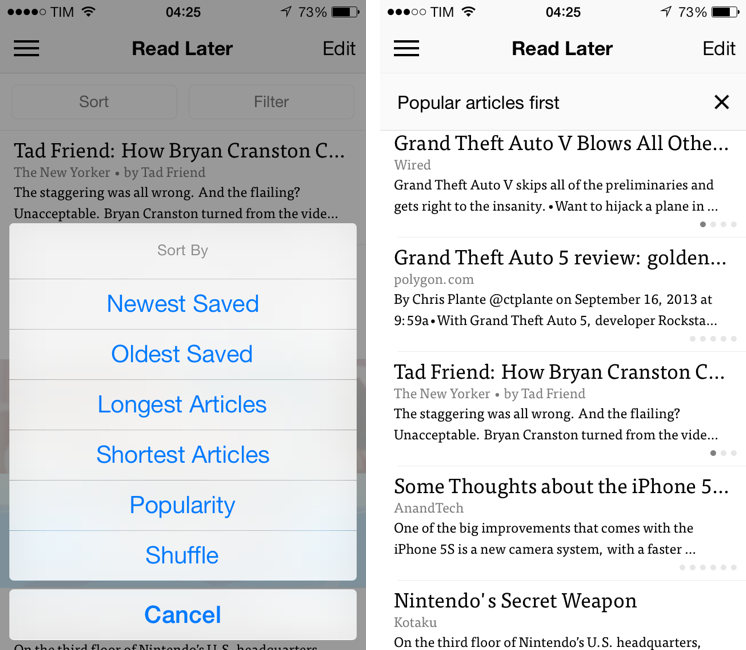 Personally, I find the new sorting and filtering options more intriguing. Articles can be filtered by reading time through a button available at the top of the Read Later screen, which provides a convenient solution to quickly find articles that take less than 5 minutes or over an hour to read. Next to the Filter button there’s Sort, which lets you change the sorting of items from the traditional reverse chronological one to oldest, shortest, shuffle mode, and – my favorite – “Popularity”. I’ve always advocated for better ways to discover content to read within Instapaper’s network of users, and I like the possible path that Betaworks may take here: when you’re sorting by popularity, Instapaper 5.0 will switch the order of articles to give you the ones that are most popular on its network. This is an interesting way to think about reading priority and the Instapaper community, and it’s proof of Betaworks’ experience with news aggregation.

Instapaper 5.0 doesn’t revolutionize Instapaper 4.0, and it’s a good thing that Betaworks is offering it as a free update from Instapaper 4.0. The basics of the app are still here and the design has been polished a little bit, but, overall, it’s still the Instapaper that Arment developed and that you probably know and love. This is no major rewrite of the app from the ground up, as Betaworks has been clearly busy in doing that for the web counterpart. It’s nice to have Instapaper ready for iOS 7 today, but I would have liked to see support for new features like background app refresh and Dynamic Type.

Instapaper 5.0 is available on the App Store.