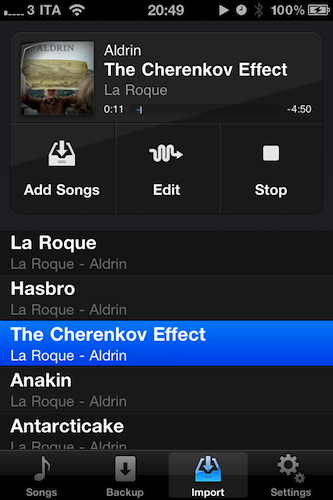 Released yesterday in the App Store, iBackupTunes by drahtwerk is one of the most powerful music apps for iOS I’ve recently installed on my iPhone and iPad. This time, though, I’m not talking about a new iPod replacement app that aims at enhancing music playback with Wikipedia or last.fm integration: instead, iBackupTunes is “powerful” in the way it lets you copy songs and albums off your synchronized iPod library, back them up locally on your device and share them with others, even wirelessly. Whilst the procedure of importing songs might sound a little too complicated at first, iBackupTunes provides a graphical user interface that makes it easy to choose music, listen to it, and back it up.

Upon firing up the app, you’ll notice four tabs along the bottom: Songs, Backup, Import and Settings. The settings tab is actually an “About” screen, so there’s really nothing you can do there; Backup and Import are the most important sections to understand the feature set of iBackupTunes. The app can import songs from your local iPod.app library (obviously it can’t import music being streamed with iOS 4.3 Home Sharing), so you’ll have to make sure you have some albums and artists synced to your device – either iPhone or iPad as the app is universal. Head over to the Import tab, and tap “Add Songs” to open the familiar iPod interface to pick artists, albums and songs; once you’ve selected a bunch of items to import, hit Done to go back to the main screen. Here, you can now listen to the songs you’ve imported, tap Edit to deselect some or choose Start Import to start the importing process and save media into iBackupTunes (the songs will not be moved from the iPod library to the app, they’ll be copied). About iBackupTunes’s playback capabilities: the app supports AirPlay streaming and iOS multitasking, plus the media player UI is gorgeous. The iPad version doesn’t make a perfect use of available space in my opinion, but the developers have time to improve the design now that the app is out and working. 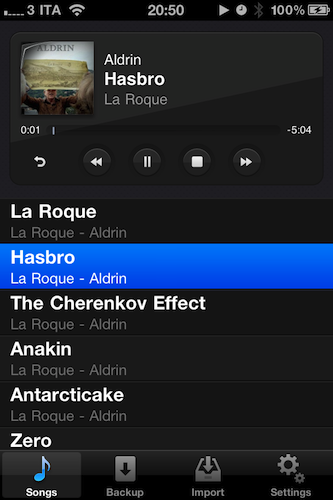 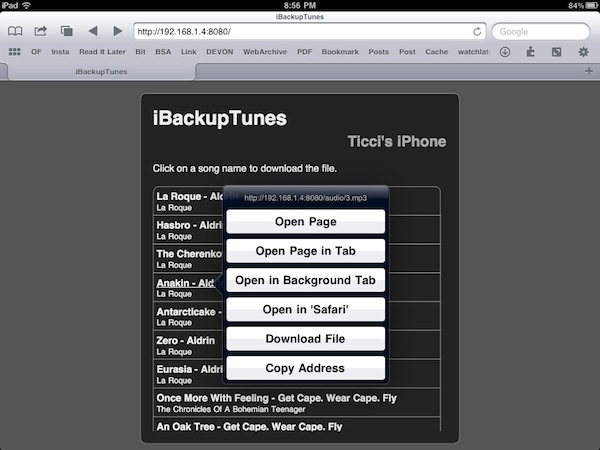 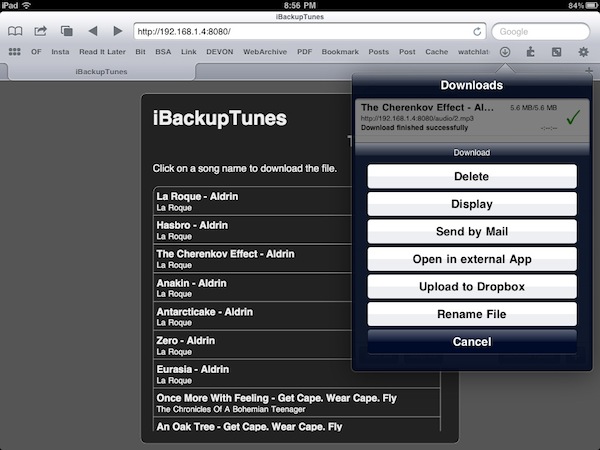 Songs you’ve copied into iBackupTunes can be browsed and played back in the Songs tab. More importantly though, songs can be shared with other devices and computers with the options offered in the Backup tab. The app allows you to export songs with iTunes local file sharing (you’ll need a computer and a cable), FTP and browser access. These two options can be accessed from any mobile or desktop web browser (as long as iBackupTunes is running on the same local network of the secondary machine / iOS device) or FTP client. Using iCab Mobile on my iPad, I downloaded the songs stored on my iPhone (previously imported using iBackupTunes) and uploaded them to Dropbox thanks to iCab’s rich set of functionalities. All of this was accomplished with nothing but iOS devices and apps. Too bad iBackupTunes can’t even sync music to the iPod app, but that’s Apple to blame.

At $1.99 in the App Store, with iBackupTunes you get a fantastic way to backup songs from your iOS music library, and share them with other people through another iOS device, a Mac or a PC. Recommended.