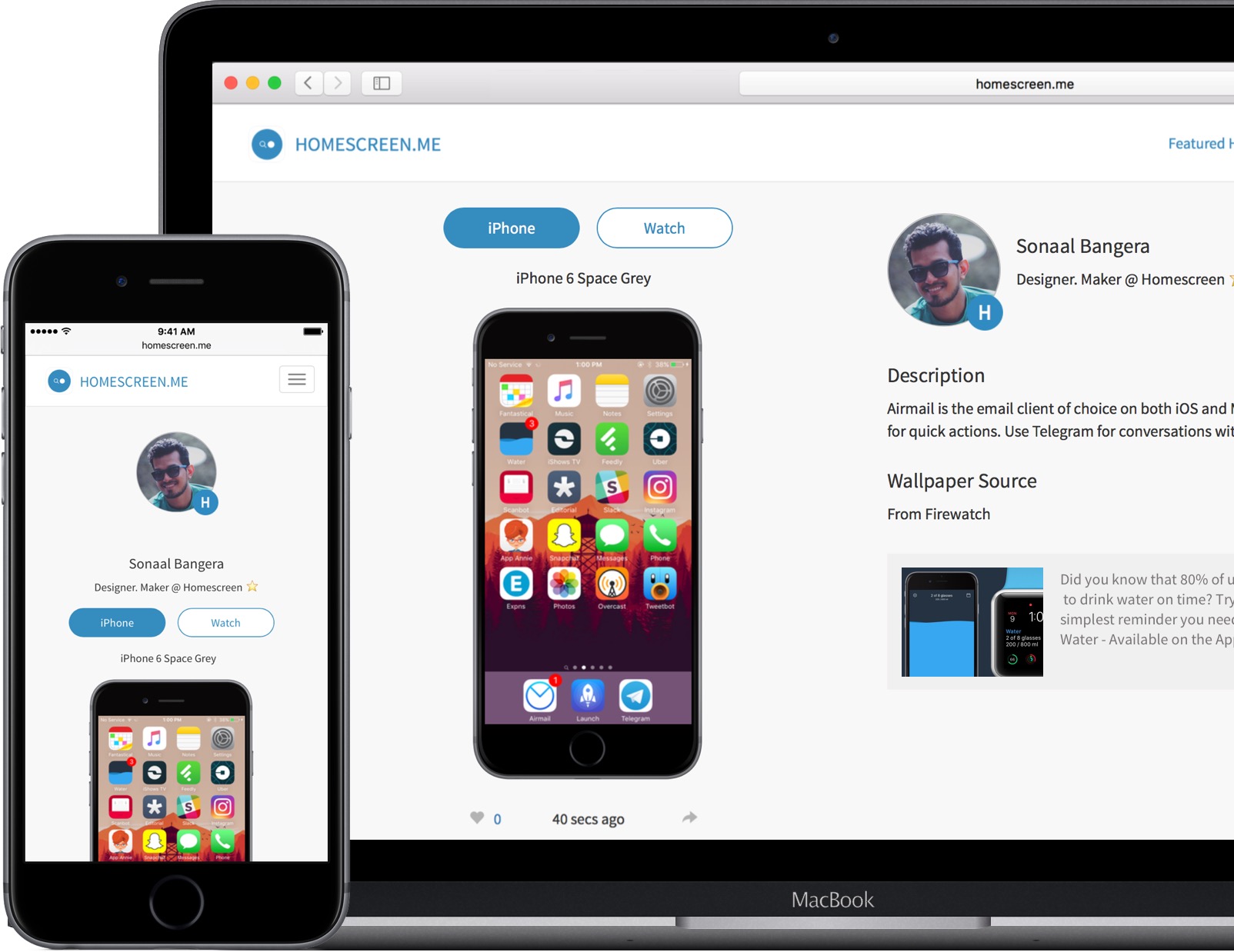 How different people arrange their iPhone Home screen is a natural curiosity for most of us with an interest in technology. We’ve featured Home screens in the vast majority of MacStories Weekly email newsletters, and it has easily been one of the most popular sections.

The iPhone has become an integral part of our lives, and seeing the apps that different people elevate to their Home screen provides insights into how they work and live their lives. But it also gives us the opportunity to discover new apps, find a new wallpaper, or re-think the layout and structure of how we organize the apps on our own Home screens.

A particularly nice touch with Homescreen.me is that in your profile settings you can choose which iPhone (model and color) and Watch (model) you own. This selection has an impact because the screenshots you upload will be superimposed onto the correct device. When you upload your screenshot you’re also given the option to provide a description, and a wallpaper source. 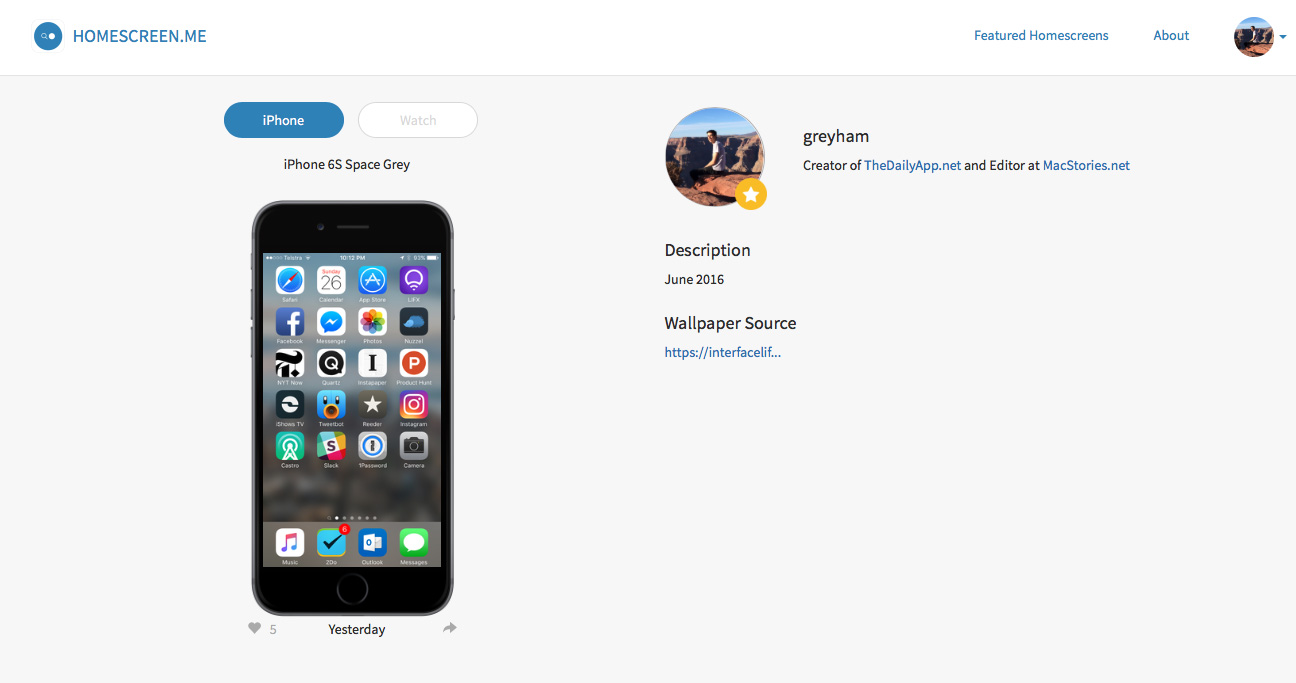 Following/Follower Interactions
I’ve been told that the team behind Homescreen.me is working on the ability for users to be able to follow each other, and this should hopefully arrive later this Summer. An ‘Explore’ page is also in the works and should arrive much sooner, giving users the ability to browse recently uploaded Home screens, most liked Home screens and search for users too.

Historic Home Screens
Currently, you can only see the most recent Home screen uploaded by any user, but as I understand it, the plan is that you will also be able to see a user’s previously uploaded Home screens. I’m told that even though you can’t see them at the moment, Home screens uploaded now are being saved and will be viewable when this feature is fully implemented on the front-end.

Email Reminders
One thing I’d like to see is the ability to get a reminder once a month to upload a new Home screen. I’d really like to see how my Home screen changes over time, and getting a reminder would go a long way to help me document that.

iPad Home Screens
Support for the Apple Watch is a nice touch, but I’d also like to see support for the iPad. With the advent of the iPad Pro, the iPad has become a powerful productivity tool for many people and I’d love the ability to see how different people organize their Home screen to facilitate productivity. Fortunately, the Homescreen.me team says that iPad support is a high priority, and will be a key focus after the user engagement features are implemented.

At this point, you may well be asking why Homescreen.me is a website and not an app. Unfortunately the answer is that there was an app, but Apple refused to allow it onto the App Store. Earlier this year I was able to beta test the app (some screenshots are below), and it was great. It is for this reason that the website was launched with only the core functionality. Having to shift development from the app to the web took time, and it does mean that the website still has some key features, described above, yet to be fully implemented.

If you’re wondering about what the reason for rejection was, this is it:

Apple executives explained to us that we cannot showcase a homescreen springboard image within the app — stating that the springboard was Apple’s IP and it was against Apple’s Brand guidelines.

Apple did offer a work-around, but fair warning, it is just as bizarre as the reason for rejection:

Unfortunately, Apple just wouldn’t budge. A work-around, we were told, was to offer users a simple text area where they can type which apps they use on their Homescreens.

If you’re interested in the full story, one of the founders of Homescreen.me, Préshit Deorukhkar, wrote a blog post about the rejection and how they continued on to relaunch the website version of Homescreen.me. 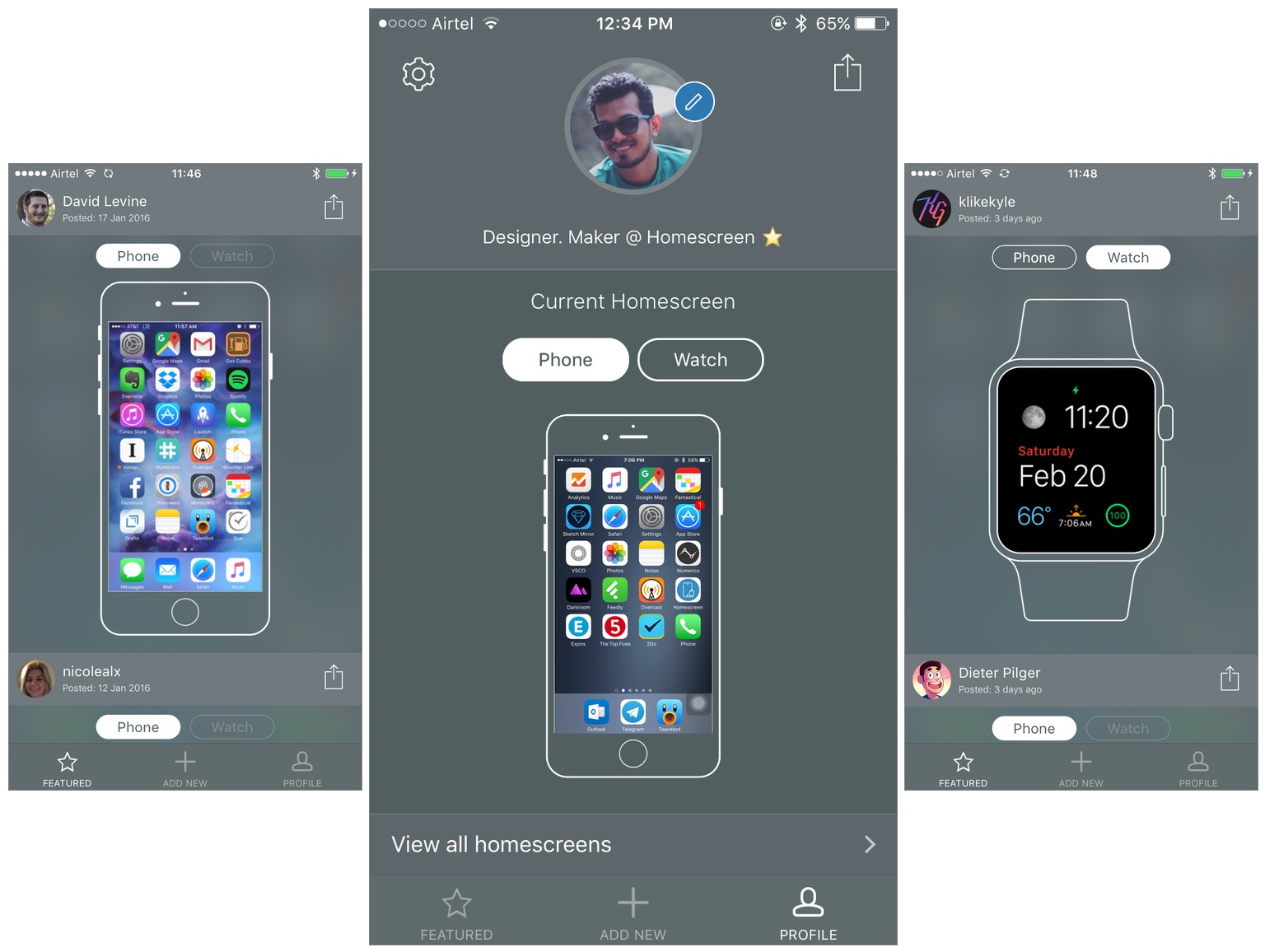 The Homescreen.me iPhone app that Apple unfortunately refused to allow on the App Store