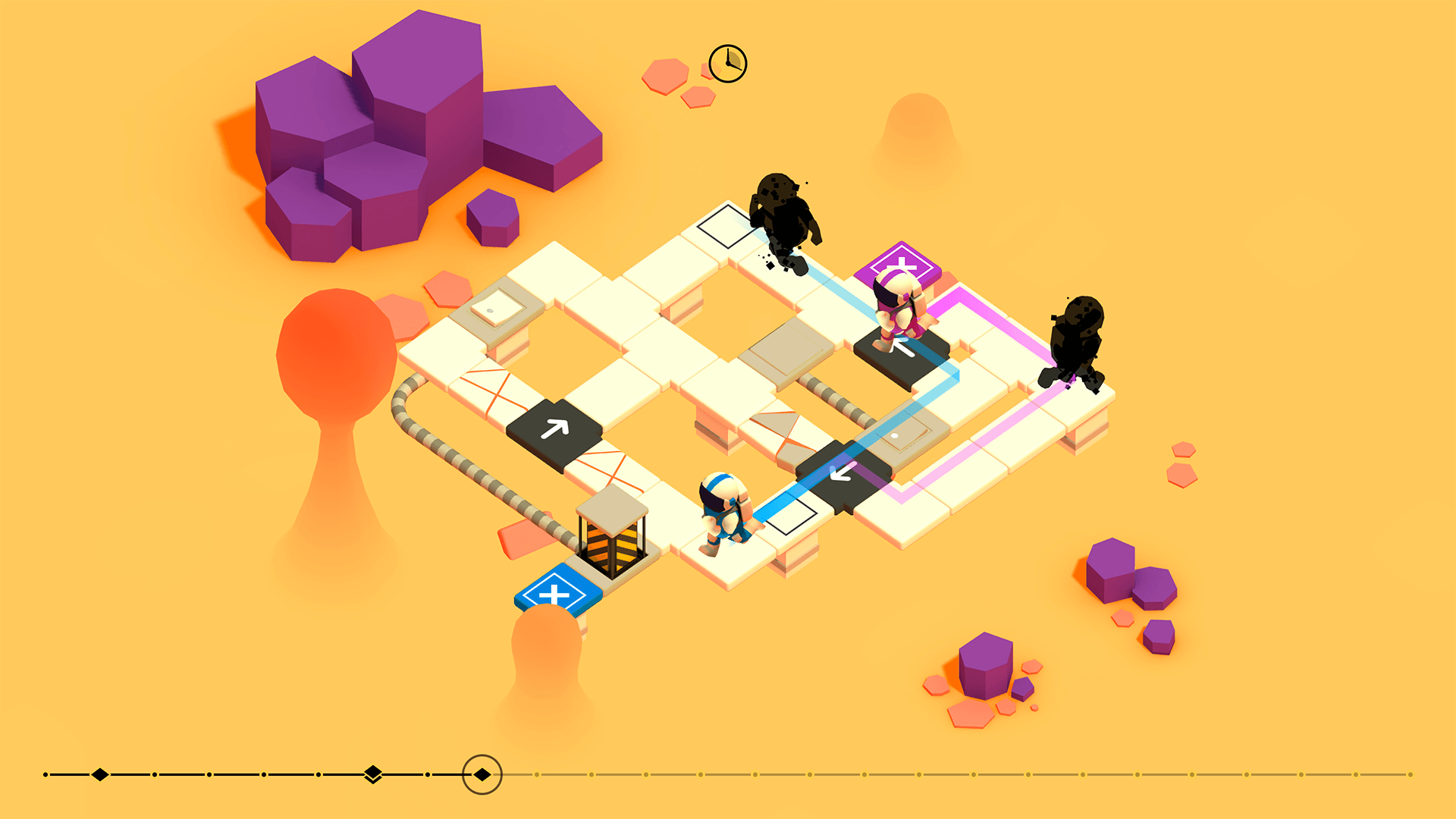 There is a certain amount of ‘trust me, just play this game’ involved with recommending Causality by UK-based Loju because it’s such a brain-meltingly complex puzzle game that it’s hard to explain in writing. In many respects, this game has to be experienced to understand it.

Causality blends time manipulation with a familiar grid-based puzzle game in a way that transcends other games in the puzzle genre. The result is a fresh, compelling game that stands out from the pack.

The goal of Causality is simply to move an astronaut from a starting tile to an exit tile on a grid-based game board, avoiding obstacles in between. The astronaut’s movement is controlled by swiping up and down. Arrow tiles can be tapped to change the direction they send your astronaut when they pass over the arrow tiles.

Multiple astronauts are added to the equation early in the game adding complexity. Each astronaut has to make it to the exit tile that matches the color of their helmet. When their paths cross, they bounce off of each other heading in the opposite direction. So far, I might have described one of dozens, if not hundreds, of puzzle games on the App Store, but Causality has a trick up its sleeve that makes it different: time.

Time factors into every decision in Causality. Every exit must be reached within a time limit, so even if there is more than one possible path to get there, often only one will work before time runs out. Precise timing is also necessary when activating switches to bypass obstacles, avoiding monsters hiding beneath some tiles, and planning the interaction of multiple astronauts and your past self.

That’s right; your past self plays a role in Causality, which is where things get interesting. Just as you start to get comfortable with the game’s race against time, Causality adds time portals. When you pass through a portal, you appear at a different point in the timeline with your current self. Suddenly, there are two versions of you interacting and working to get to the exit. This is where it becomes almost impossible to describe what is happening in Causality. It takes a while to get a feel for how the game’s time loops operate, which is a big part of why this game is so fun.

Trial and error is key to Causality. If you fail, swipe in the opposite direction to rewind time and start over. In all, there are 40 levels split across 4 worlds, plus 5 extra-hard bonus levels per world for a total of 60 puzzles. That’s a big game for one that ramps up in its difficulty fast. As a result, you can expect to get hours of enjoyment from Causality. In a nod to how tough this game is, the developers recently added the ability to skip ahead one level if you get hopelessly stuck, which should help keep the game more fun than frustrating.

The time travel component of Causality makes the game fun by complicating the logistics of guiding your astronauts to their goals. What makes the game stand out, though, is understanding how the time loops work, which is critical in the later levels. Add to that great graphics and a spacey, astronaut-worthy soundtrack and Causality is a real winner that is a must-play game for anyone who loves challenging puzzle games.

Causality is available for iOS on the App Store and for macOS on Steam.