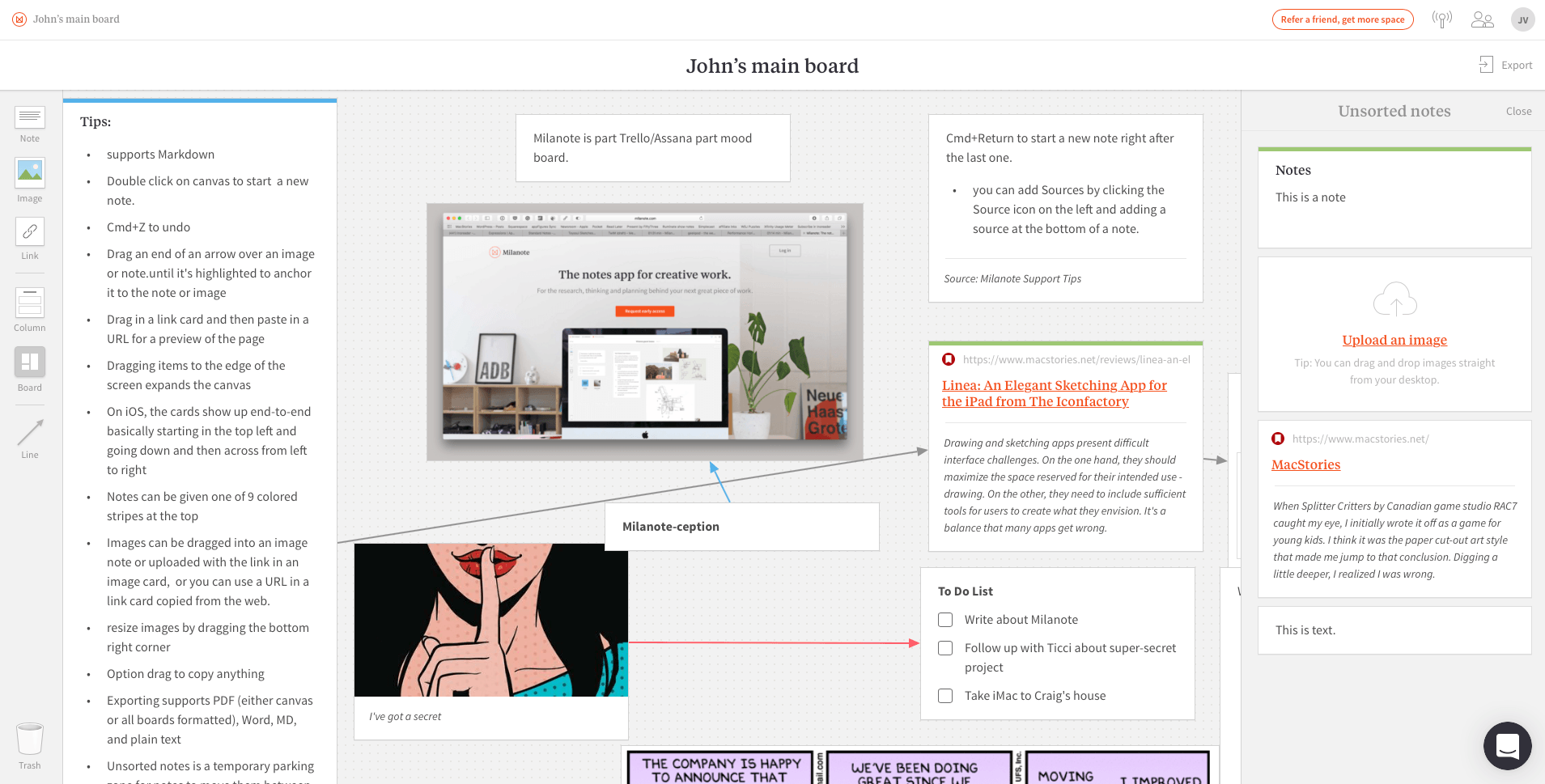 Research is an inherently messy, non-linear process. In a traditional note-taking app, text, links, and images quickly wind up a disorganized mess, and moving items around with cut and paste is cumbersome. Milanote is a free-form note-taking web app designed to bring order to the chaos.

Notes are collected in cards, which are placed on boards that perform a function similar to folders without the traditional tree hierarchy. A card can contain text notes, images, or links and be dragged around a board and connected to other cards with lines and arrows to organize them. You can also color-code cards with one of nine colors to add a subtle, but a visually useful strip of color to the top of a card. To get started, all you need to do is drag a card from the left sidebar onto the board.

Notes support basic Markdown syntax, including H1 headings, bold, italic, quotes, and bulleted, numbered, and checkbox lists. A particularly nice touch when you’re researching is that source information can be added to the bottom of any note. Milanote’s Markdown support is limited, however. Only H1 headings can be added, you cannot nest lists, and table support is limited to Column cards, which are essentially one-column-wide tables that can be populated with other cards from your board. Columns are a nice way to bring some structure to related materials, but I would like to see full support for tables and broader support for other MultiMarkdown syntax to add greater formatting flexibility.

Image cards can be locked into position and have a caption added to the bottom of the card. Links are added by pasting a URL into a Link card, which expands into a rich preview similar to what you get with links pasted into Apple’s Messages app. With Link cards, you can also add Dropbox or Google Drive files to a board using their share URLs, though I would prefer to be able to add other kinds of files to cards too.

Milanote also supports collaboration and sharing. You can invite a colleague to join a board and work together on it, though only one person can edit a card at a time. For read-only sharing of boards, you can generate a link in Milanote that gives recipients viewing, but not editing, privileges.

I was happy to see that Milanote includes several ways to export your boards as text-based PDFs, Word documents, Markdown, or plain text, each of which converts cards into one continuous document. The resulting output looked better than I expected given the free-form structure of Milanote. If you would rather preserve the style of the web version of a Milanote board, though, you can create an image-based PDF of the entire canvas. 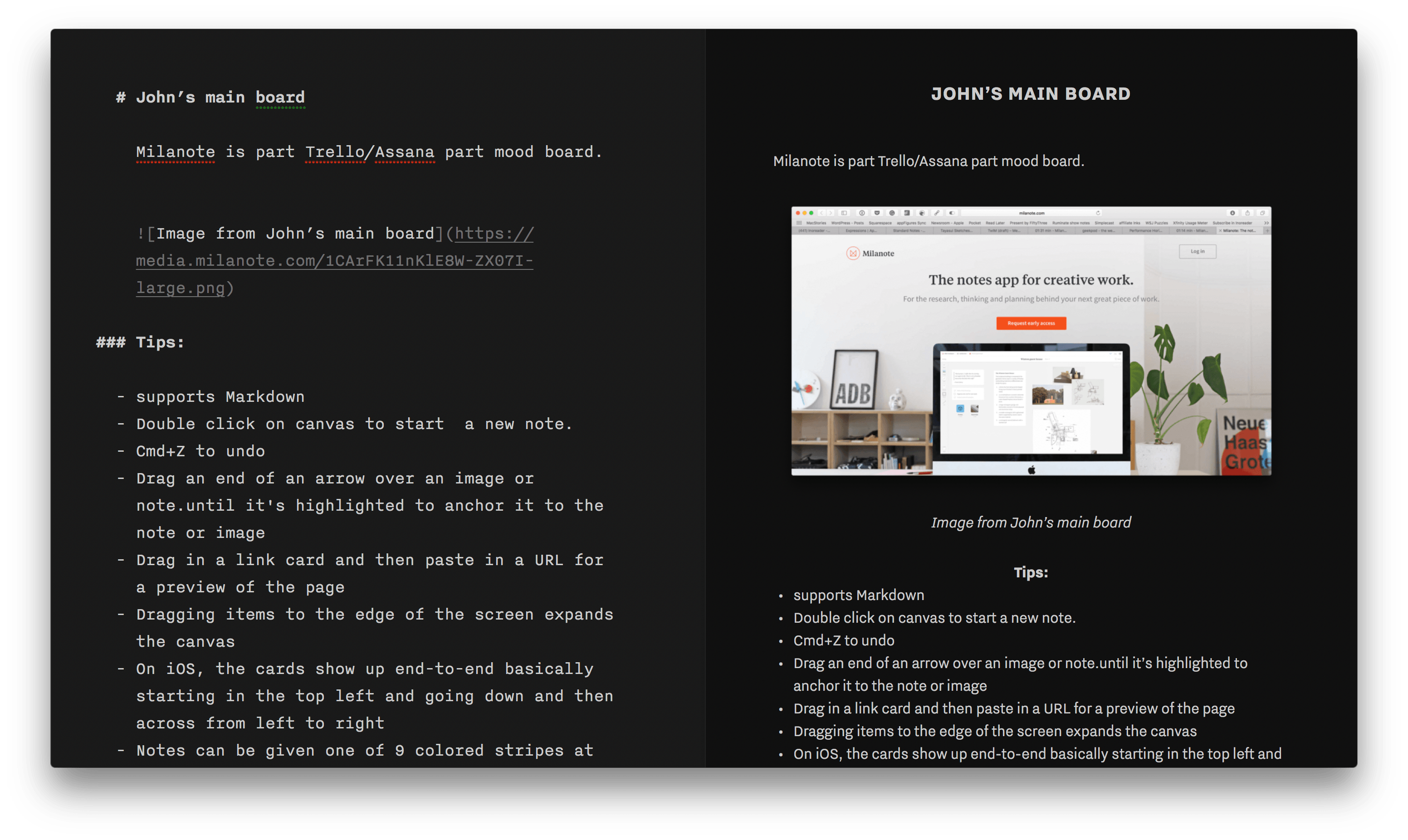 My Milanote board converted to Markdown and viewed in iA Writer.

Milanote is one of the nicest web apps I have used. It works well on a Mac, and is capable, though less polished on iOS. For instance, if a colleague is editing a card and you try to move another card on iOS, the cards often don’t animate smoothly across the screen, jittering instead. Also, on iOS there is a ‘plus’ button to access the document picker for adding cards, which is handy, but I would prefer a native iOS app with an extension to dump text, images, and URLs onto a board from other apps. Fortunately, Milanote’s developers are working on an iOS app that they plan to release later in 2017.

Milanote’s clean design, flexibility, and focus on directly manipulating content visually has much to commend it. I can imagine many use cases, from students taking course notes to writers planning books, to teams of developers and designers mapping out a website. Really, any project that requires pulling together disparate bits of data would benefit from the organization that can be brought to bear with a tool like this.

Milanote offers a free plan that includes 100 notes. Depending on the size of your projects, that may be enough for many people. For example, I created a board with fourteen cards while researching this review that could have been done with fewer. Unlimited note storage is $12/month if paid annually ($15/month otherwise) and $10/month for teams of two or more people when paid annually ($12.50/month otherwise). That’s relatively expensive for a note-taking service, and it feels like there could be a middle plan with more, but still limited, storage. Still, 100 notes are plenty to get your feet wet and evaluate whether a paid plan is worth it to you.

You can sign up for a free or paid plan on the Milanote website, and until March 1st, you can get 20% off for the lifetime of a paid account by using the code ‘launch20.’