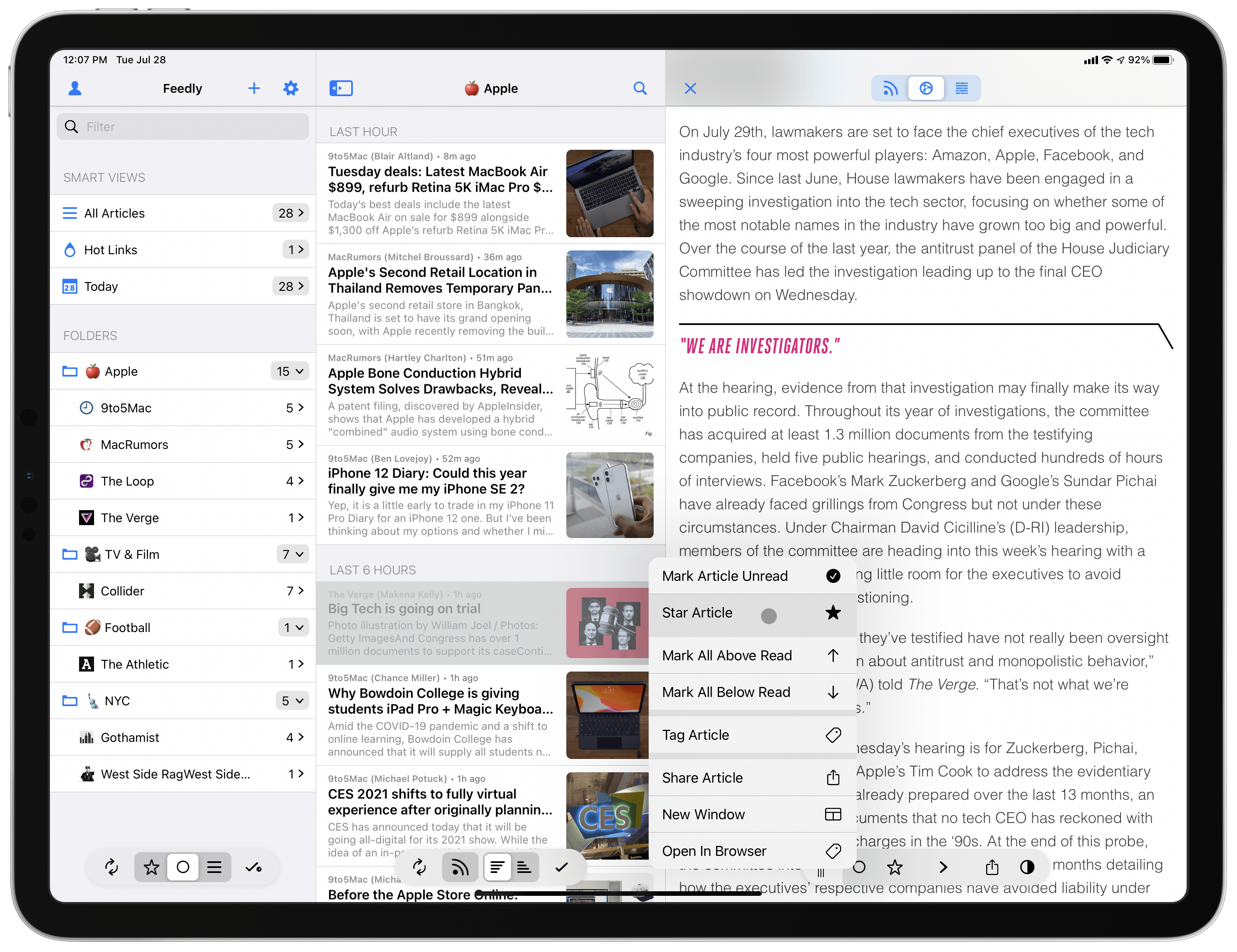 When I imagine the quintessential RSS user, I think of someone who wants full control of their web reading experience. They don’t want to leave news curation up to an algorithmic service like Apple News, or a social media platform like Twitter or Facebook. They also care about tools like filtering controls, and tweaking the reading experience to their preferences. For such a user, Fiery Feeds may be a natural choice due to its abundance of supported RSS services and settings to tweak, along with some key pro features. Today, Fiery Feeds is better prepared to meet the needs of that kind of user thanks to a pair of important additions: full-text search and saved searches. Throw in optimized iPad pointer support, plus a new native article rendering option, and the latest Fiery Feeds update is a compelling one.

Saved searches are a feature commonly found in Mac apps but rarely their iOS and iPadOS counterparts. Fortunately, Fiery Feeds is the latest exception to this trend, debuting a new saved search option that’s available even on mobile-first platforms. Saved searches can be created with a simple tap on the plus button that appears any time a search is initiated, and they appear in your feed list in a dedicated section. 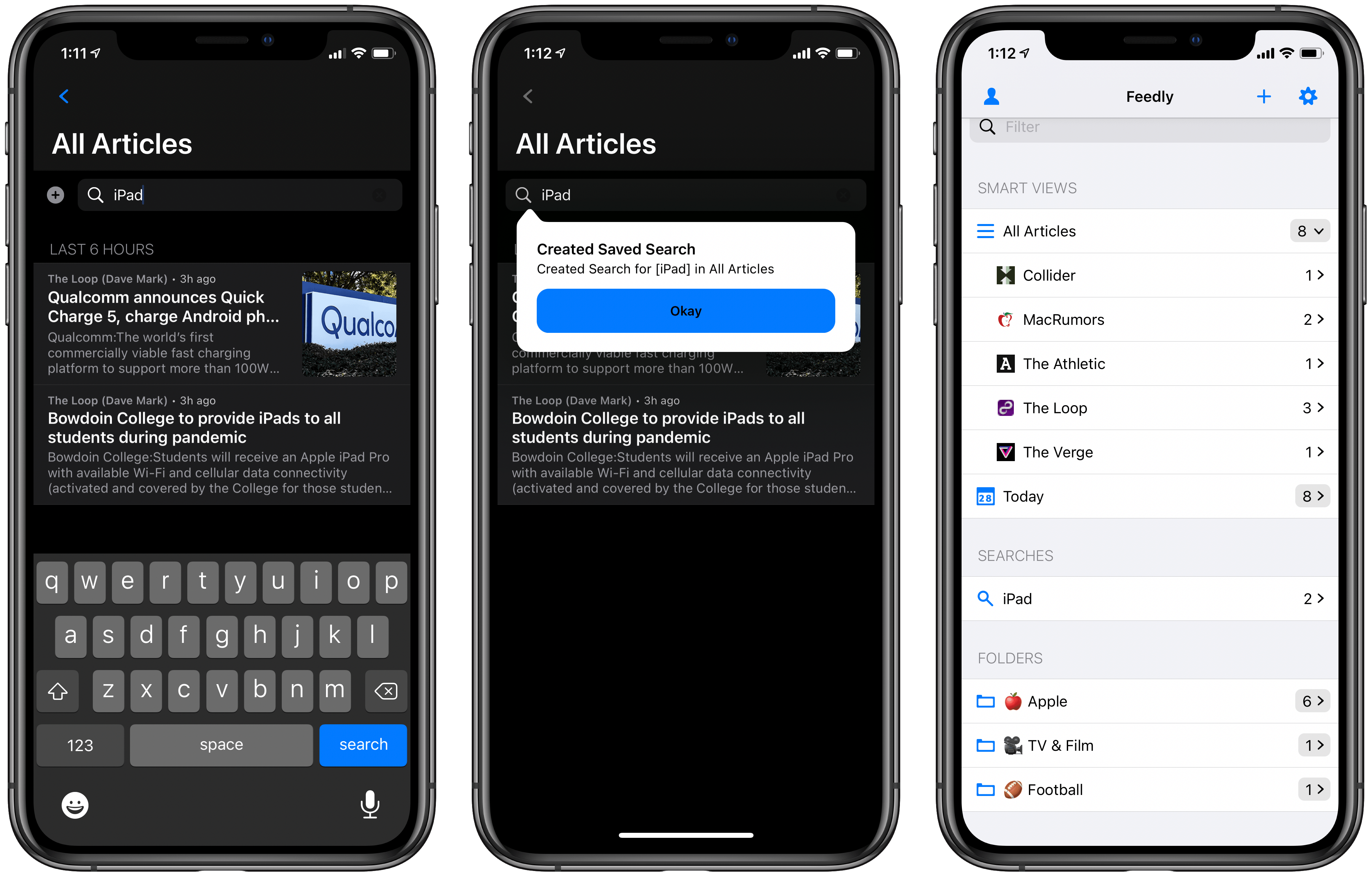 Saved searches would be pretty pointless were it not for another key addition to this release: full-text search. You can now enter any search term to have Fiery Feeds scan not only the title but also the body of every link in your feeds, surfacing matching articles from the flood of all your subscriptions. Full-text search and the ability to save searches seem like features designed with my “quintessential RSS user” in mind: they provide even more nuanced content controls than ever before, so you can spend your time viewing exactly the content you want.

On the iPad, today’s update brings full support for iPadOS’ pointer. When you have a trackpad or mouse connected to your iPad, the pointer will adapt to different interface elements in Fiery Feeds. It will snap to buttons so you can click them more easily, morph into a text input line in search boxes, let you right-click items in your feed list or article list to open context menus, and the pointer will even highlight feeds or articles it’s hovering over. Most of this is standard protocol for pointer-optimized iPad apps, with the sole exception of the hovering behavior.

When I first started using the iPad’s pointer in iPadOS 13.4, I occasionally found that certain interface elements I’d expected to react with a highlighting or dimming effect when I hovered over them offered no such response; notes in a note list, for example, or folders in a folder list. Apple set the standard for this behavior and third-party apps have mostly followed suit. Fiery Feeds does things differently, however, causing cells in your feed list and article list to change color shades in response to the pointer’s presence. While it’s been interesting seeing an implementation that more closely models what I originally expected, the app has confirmed for me that I think Apple made the right call in limiting the pointer’s visual activity. I’ve found the extra visual cue more distracting than helpful in use, and wish there was an option to disable it. Ultimately though, I think it’s a matter of personal taste, and some users may find Fiery Feeds’ approach exactly what they’ve been looking for from the iPad’s pointer.

Native article rendering. Fiery Feeds’ developer Lukas Burgstaller has built a native rendering system that parses a site’s HTML itself and uses native OS elements like UIImages and UILabels to display an article’s content. I prefer viewing articles with their source site’s design retained, so this doesn’t impact me personally, but for those who prefer the app’s uniform layout for articles’ content, this change should result in improved performance.

Search in settings. One of my favorite details about Fiery Feeds is how customizable it is. This means the app, by necessity, has a big and complex settings screen, and before now it was easy to get a little lost in there. Now, there’s a search box in settings to help you quickly find the function you’re looking to tweak.

None of today’s changes to Fiery Feeds are revolutionary, but they do make the app tangibly better in key ways. Full-text search and saved searches can be extremely valuable tools, especially for users who subscribe to a lot of feeds. I’ve praised the app before for its three-column layout on iPad, so it’s great to see pointer support keep that iPad app current with modern technologies. And the miscellaneous improvements, including a fundamental change in how articles are rendered, are welcome too.

Fiery Feeds is available on the App Store as a free download, with an optional Premium subscription to unlock advanced features such as the new saved searches and full-text search.