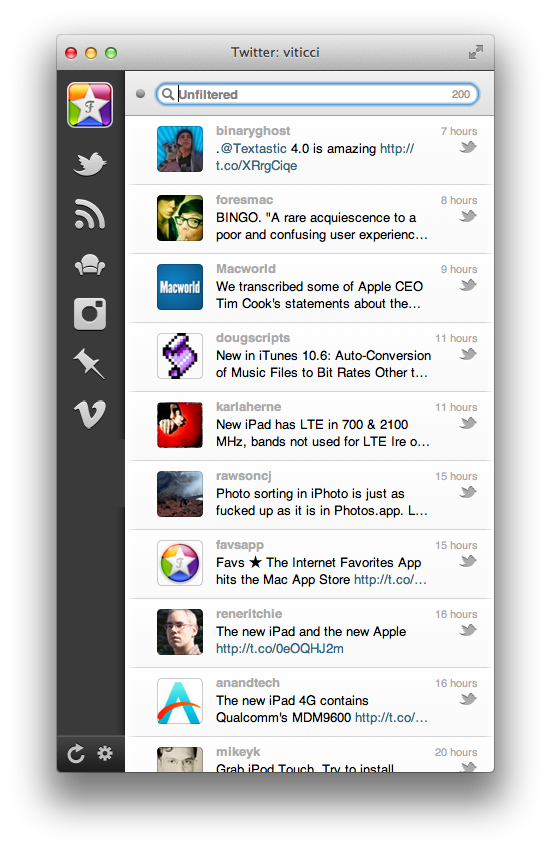 Favs, a new app for Mac I initially wrote about when it was in beta in February, is now available on the Mac App Store. And I don’t say this very often, but Favs is exactly one of those things I was looking for, and needed, as I had wondered why no one on the Internet had come up with it yet. In my article, I explained the main concept of the app:

A few weeks ago, I tweeted I’d like to see some sort of Twitter client with its only focus being on Favorites — I keep Twitter open all day, and I save a lot of links. Prior to ending up in my Evernote or Pinboard accounts, the tweets I want to “save for later” are marked as favorites, which, I believe, provide an easy way to use a built-in Twitter functionality for general-purpose “bookmarks” that I may or may not consider for a post or more serious bookmarking in a second service. As you can see, I have a lot of favorites. The same is true for other services I use on a daily basis, such as Google Reader, Vimeo, YouTube, or Instagram: I like to be able to “star”, “like” and mark things as favorite so a) the service knows the stuff I’m interested in and perhaps will leverage this data sometimes in the future or b) perhaps other apps will. And while I’m still waiting for the ultimate app that looks at your Internet favorites and delivers content intelligently to you every day (albeit Zite is on the right path), it turns out someone has built a functional and nice-looking desktop aggregator called Favs.

The app is mostly unchanged from the latest public betas, but there are some notable additions here and there. For one, the updated list of supported sources now includes:

Coming from the beta, the sidebar icons also seem more polished, the animations a little faster. As you can see, Favs is yet another app that uses Tweetie’s old navigation concept for switching between sections; for as much as I can’t stand ideas being shared around between apps without considering an app’s unique nature, I think some elements do work across different software, and become standards.

Favs can be viewed in normal mode, with a web view for your Internet favorites on the right, or in compact mode. I particularly appreciate the latter, as you can then use Quick Look (hit the space bar or CMD + Y) to preview items in seconds. This works for articles, images, videos – anything you can mark as favorite online becomes an item in Favs. 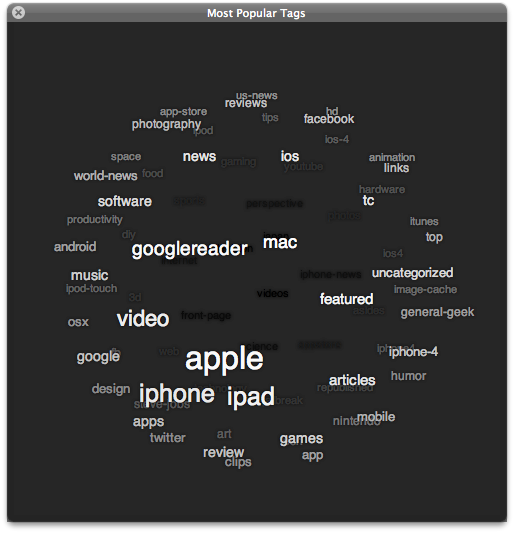 Another nice feature of Favs is the tag cloud. If you save a lot of items online like I do, it’s likely that you’d be interested in a way to later search for a specific entry within all those articles and Instagrams. Whilst I use Greplin to do most of the heavy lifting for me, I like Favs’ basic tag and search features – Favs is capable of fetching a lot of items through APIs, and keeping a searchable list of old favorites is a welcome addition.

There are a few things I’d like to see in a future version of Favs. More keyboard shortcuts, for example, and a revamped sharing system that allows me to easily pass links to other services, like Reeder does. Right now, Favs’ sharing features are limited, but you can always rely on Copy Link and Services to automate the process of sharing links. Last, as I previously wrote, I think an iOS version of this would be fantastic, especially on the iPad.

Services like Instapaper and Pinboard empower you to “read later” and “bookmark” the things you like. Favs runs at a higher level, collecting favorites from other services that already enable you to save favorites. As I said, this kind of app is a web nerd’s dream come true for me, so I recommend you check out Favs at $4.99 on the Mac App Store.