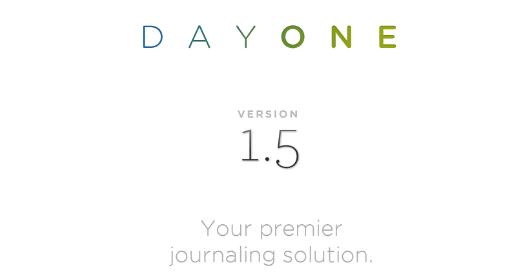 Earlier this year, I started using Day One. Not just another text editor with Mac and iOS versions and support for Markdown formatting, Day One is at the same time a flexible and focused solution to archive your thoughts, memories, experiences into a well-built interface that keeps everything in sync across Macs and iOS devices. A fresh take on the old paper journal, Day One takes advantage of modern technologies such as local reminders to tell you when it’s time to write your journal; on the iPhone and iPad, the app supports different font sizes and Markdown, so you’ll be able to write nicely formatted documents that you can easily export to HTML. On the Mac, Day One comes with a standalone menubar application that makes it incredibly fun and quick to jot down thoughts whenever you want.

Day One’s 1.5 update for iOS, released today on the App Store, brings a more powerful Dropbox sync for iPhones and iPads (Day One can store its database in Dropbox, and it allows you to export notes on the Mac via File>Export) and the long-awaited iCloud sync, which I’ve been able to test on my iPhone 4S and iPad 2 (Day One 1.5 for Mac isn’t live yet, but it’s been submitted to the Mac App Store).

I came from an old installation of Day One with a Dropbox database synced to my iPhone and iPad. As I upgraded to version 1.5 and launched the app on both devices, I was asked to disable Dropbox sync if I wanted to use iCloud. I disabled Dropbox, and waited a few minutes for the initial iCloud background sync to finish (it had to pull at least 50 entries to begin with). 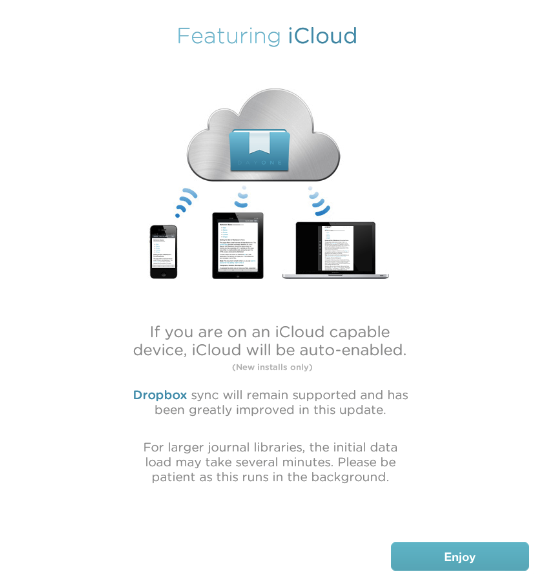 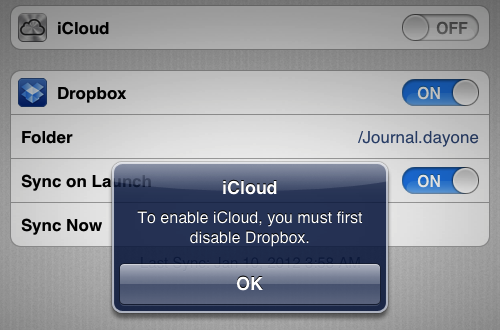 Once iCloud is up and running in Day One, it is extremely reliable, fast, and invisible. Unlike Dropbox, it’s not manual sync you have to initiate or automatically perform upon launch and quit – it’s push technology that constantly sends changes back and forth between devices. As an example, I started writing a new entry on my iPhone and it showed up after a few seconds on my iPad, which was running Day One. The main list of notes on the left basically refreshes to accomodate a new note – no manual sync needed. For the same reason, notes are pushed with iCloud as you write them – typos included. 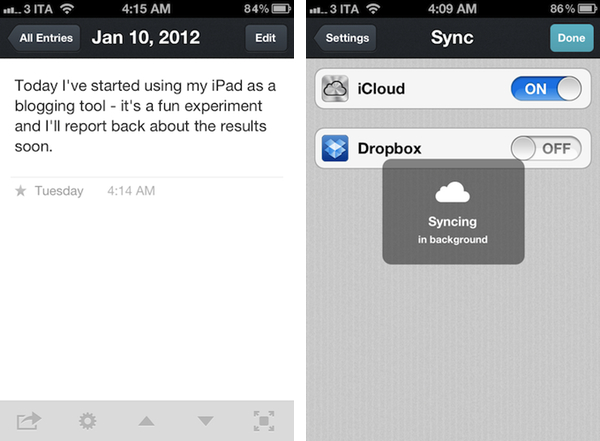 Day One 1.5 clearly fits in a much bigger picture with the Mac client constantly receiving changes from the cloud, but this doesn’t mean you can’t enjoy Day One 1.5 for iOS now. In fact, I often find myself writing my journal on iOS devices rather than the Mac, so iCloud support (with this kind of invisible push technology) is more than welcome.