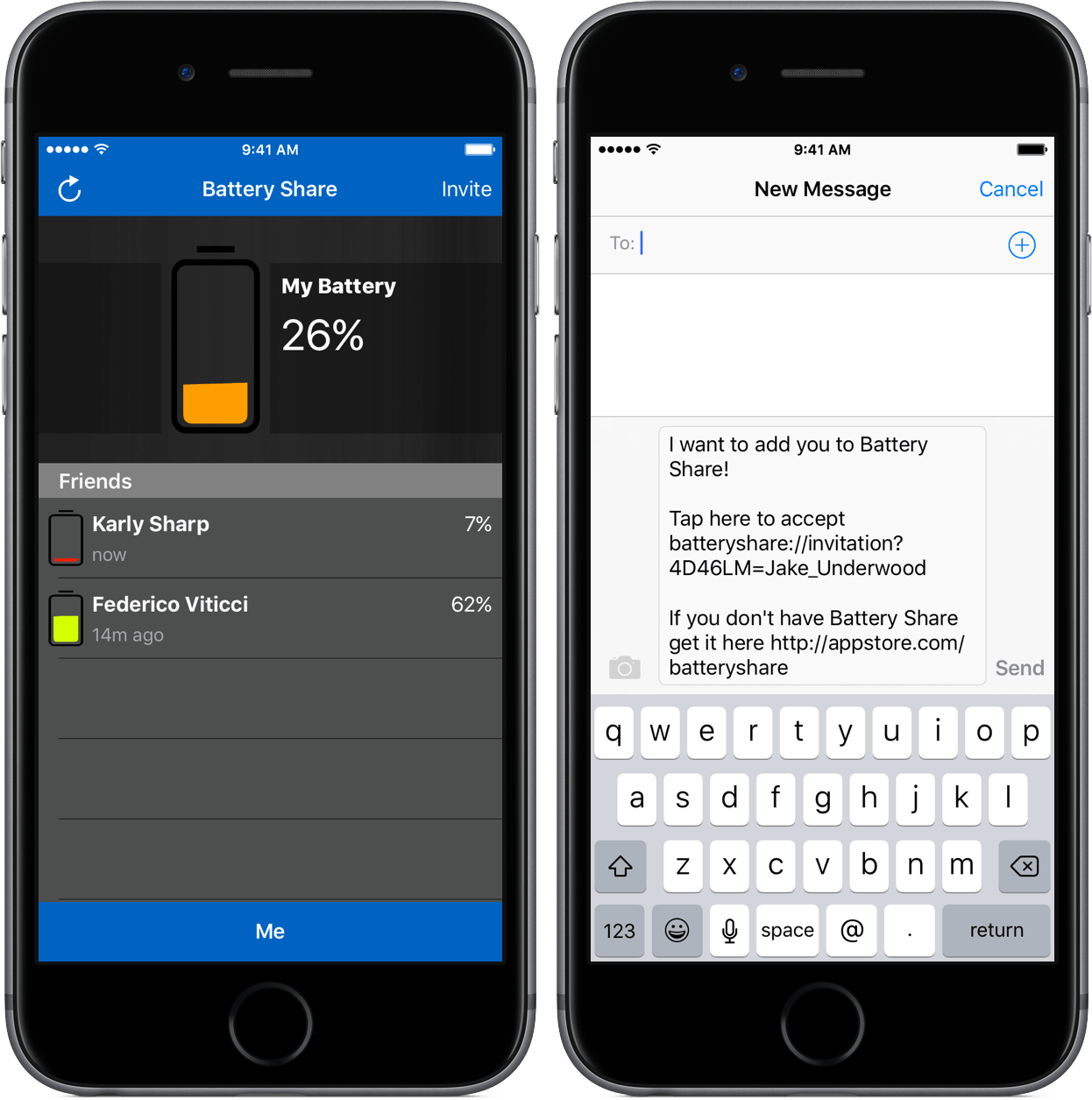 We’ve all been there – a dead phone and an expectant person wondering why we haven’t responded. Without any battery, there’s not really a solution to the problem, as the most common communication apps people use are inaccessible.

Battery Share from developer Terry Demco makes this issue one of the past by introducing a simple way to communicate battery life between friends. Although it takes some effort to set up, the results are well worth both the app’s $0.99 price and the setup time needed.

Unsurprisingly, the main functionality of Battery Share comes in the form of communicating device battery life between two people. By reading your device’s battery, the app will keep an updated percentage in the app and send it off to the people of your choosing that also have Battery Share on their device. Of course, you’ll be able to see their battery life too, including a percentage and a battery icon. Adding friends will build the list, with the names being listen in added order. 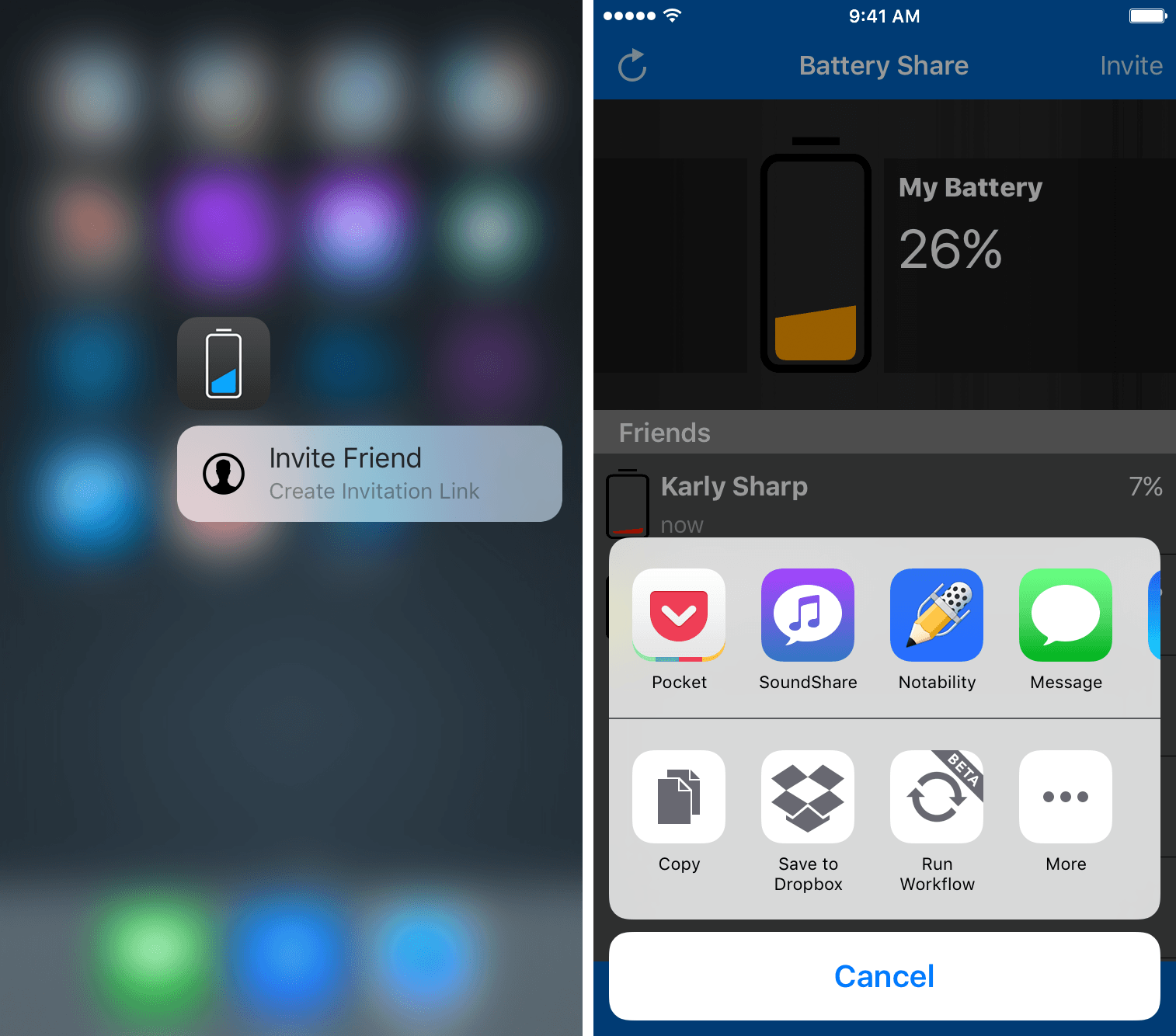 Don’t rely on Battery Share to do all the work, though, because it can’t insert the data without the consent of others. Instead, Battery Share sports a simple invitation system that uses the iOS share sheet. Once you’ve chosen the communicating tool of choice, Battery Share will include a set of links and text that will prompt your friend to add you on Battery Share or download the app if they have not yet done so. Tapping the accept link will connect the two devices and begin communicating their battery percentages.

However, it’s impractical to constantly check the app and make sure that your friends aren’t losing the constant fight with battery loss. To combat this and make it easier for you to know when you might need to make contact with someone on your list, Battery Share will push a notification informing you that your friend’s battery is low. Generally, this may be around 15%-20%, but I haven’t been able to to nail the exact number through my testing. 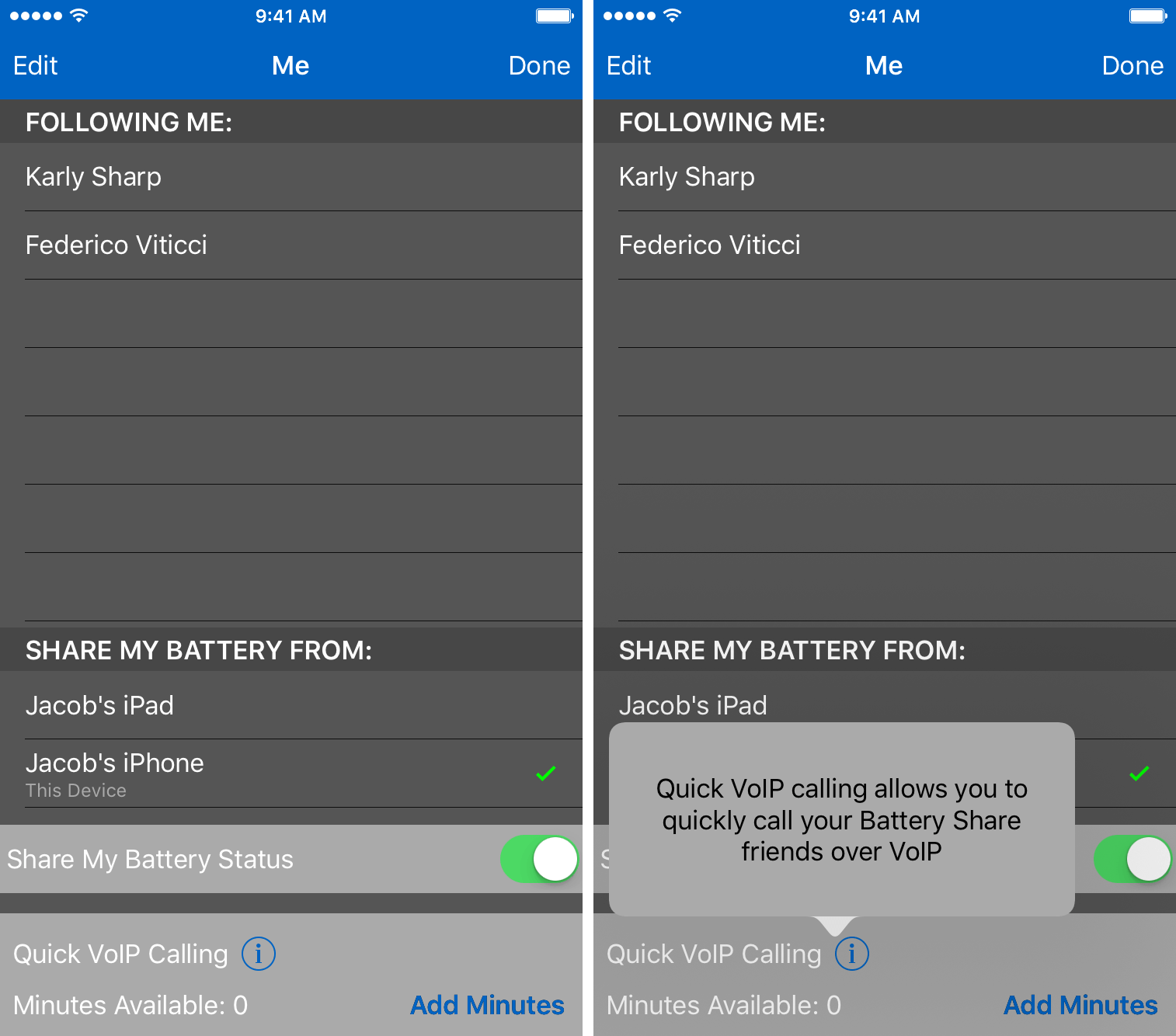 If it’s becoming increasingly obvious that you need to contact a friend before their device kicks the bucket, Battery Share supports VoIP calling through in-app purchases of minutes. $4.99 will buy you 100 minutes, but save yourself the trouble and just use the phone or another messaging service.

For users who install the app on multiple devices, you’re able to select the device you’d like to display the battery for by tapping on ‘Me’ along the bottom. Truthfully, this isn’t incredibly useful – Battery Share doesn’t display a description of the device, so your friend won’t be able to tell what device you’re sharing from. However, this feature may come in handy for those with multiple phones.

Over the course of owning a smartphone, I’ve said, “Sorry! My phone was dead” enough times to know that it’s important to communicate battery life. At best, no knowledge of a dead phone can cause an inconvenience; at worst, however, there can be serious repercussions.

With Battery Share’s alerts, it’s easy to become aware of the potential for a drop in communication, encouraging two parties to make the necessary arrangements before one is without battery.

While Battery Share is fairly consistent in updating friends’ battery life, there were times during my testing where tapping the refresh button at the top left failed to do anything. This wasn’t a huge problem at the time and shouldn’t be significant enough to make much of a difference – unless the issue persists multiple times spanning many hours.

An additional point of failure is the inability to rearrange friends on the main screen. Users with many friends would certainly find this irritating, as it would prevent them from moving the most important people to the top of the list.

As far as suggestions go, I’d like to see more options to jump into a method of communicating with a friend. Although VoIP is a good start, it’d be nice to have the ability to send a text, make a phone call, or send a direct message on Twitter from within the app.

Currently, the only action extension offered by Battery Share is quick access to an invitation link. If at all possible, adding a way to view a friend’s battery by pressing on the icon would be another level of convenience. Alternatively, a Notification Center widget would also fit this need.

With a unique concept and impressive execution, Battery Share has the potential to be a useful tool for your iPhone or iPad. Unfortunately, the app’s price tag may be a deterrent to many – convincing people to purchase an app can be tough, even with an endorsement from an app reviewer (Note: now taking design applications for Jake’s Seal of Approval). If Battery Share can grow into a must-have utility for friends, it has a chance to gain traction.