I have many applications on my Mac, many of them for reviewing purposes, but I tend to keep a very few in the dock and some running in the menubar. Of all these applications I have most of them belong to the first category, they are apps that require me to look at them and perform actions basing on their user interface. 1Password needs me to input some letters in a text field to unlock its database, and Cyberduck wants me to select the proper folder to upload pictures. My action is needed, always and immediately. Without my action, these applications are lost like an empty car. I have to drive them to go somewhere (working with them), but I also had to learn driving them in the past to get used to their system.

Then there are applications that live quietly in the background, do their job without requiring my attention and are there when I need them. From a technology standpoint, they’re not that different. I use these “quiet” apps just like I use the other ones. But from a user point of view, there’s an immensely huge advantage when using the quiet apps: even if you actually use them, you don’t notice them. So I guess that their biggest feature is that of melting with the OS and become an invisible layer of your workflow.

Clipmenu is an application I’ve been using for many years now and, just like the Finder or Mail, is an application I’m highly dependent on, mainly because it’s become so well integrated with the OS that I don’t even notice using it anymore. Any Mac that doesn’t have Clipmenu installed doesn’t feel like a real Mac to me.

Clipmenu is a clipboard manager. It’s free and it single-handedly changed the way I used to work with a computer. As you can guess, the role of a good clipboard manager should be that of enabling you to retrieve your clipboard history in a few seconds, with a few clicks. Sadly, most of the clipboard managers I’ve tried over time can’t stand a chance against Clipmenu, which is free, easy to use and well integrated into the Mac OS X environment. Basically, you assign a keyboard shortcut to it (mine is CMD + ALT + V) and it opens a contextual menu, organized in folders, with all your recent entries from your system clipboard. You click one, and it gets pasted. If you’re not into a text field, it gets stored as the frontmost entry in the clipboard once again. It’s fast and simple. But this is just the tip of the iceberg, because if you want to come up with a perfect setup of Clipmenu you’ll have to do some initial customization. 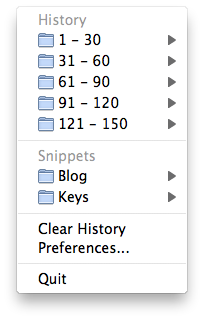 First you should specify how many folders and how many clipboard entries you want to see in the contextual menu. I tend to hit cmd + c a lot of times during a typical work day, so I went for many entries into many folders. This way, I can access in the evening something I remember I copied in the morning.  Could be a URL or an email address, doesn’t matter. What matters is that I can have a real, unlimited clipboard history, an aspect that many clipboard managers don’t seem to consider enough. Also you can decide whether or not you want to see icons for the different file types you may have copied: if it’s a plain text you get an icon, if it’s rich text you get another one. This is very useful when you’re editing, say, a plain text file and you don’t want to copy something in rtf because the dialog box that will appear bugs you. There’s a solution for this, but I’ll talk about it later.

Clipmenu isn’t limited to text though: images can reside in the clipboard as well, and you can also set the size of the preview in the contextual menu: I don’t copy images that often, but when it happens I’m glad to have this feature. Also it’s worth mentioning that you can navigate and choose entries in the contextual menu both via mouse and arrow keys. It’s the little things.

There are lots of other options in Clipmenu you can play with (Snippets, that’s it), but the one thing I’d like to mention is the “action” command you can activate by assigning a modifier key. Action allows you to perform actions on the text in the clipboard directly within the application by using some JavaScript tricks you don’t have to know about. To get a better hang of it, let’s just say that you can paste a rich text as plain text, or convert a markdown selection to HTML upon pasting it. Or perhaps you might be interested to know that you can apply lowercase and Uppercase to text, Together With Title Case. It’s great, and you can customize it the way you want it.

Clipmenu is honest: it doesn’t promise to appeal you with God knows what great UI design, it just places. A contextual menu on screen which you can use to get back all the things you copied. It’s lightweight, doesn’t get in the way and, most of all, it just works.

It will become so natural for you to use it that you’ll forget it’s not part of the OS itself.