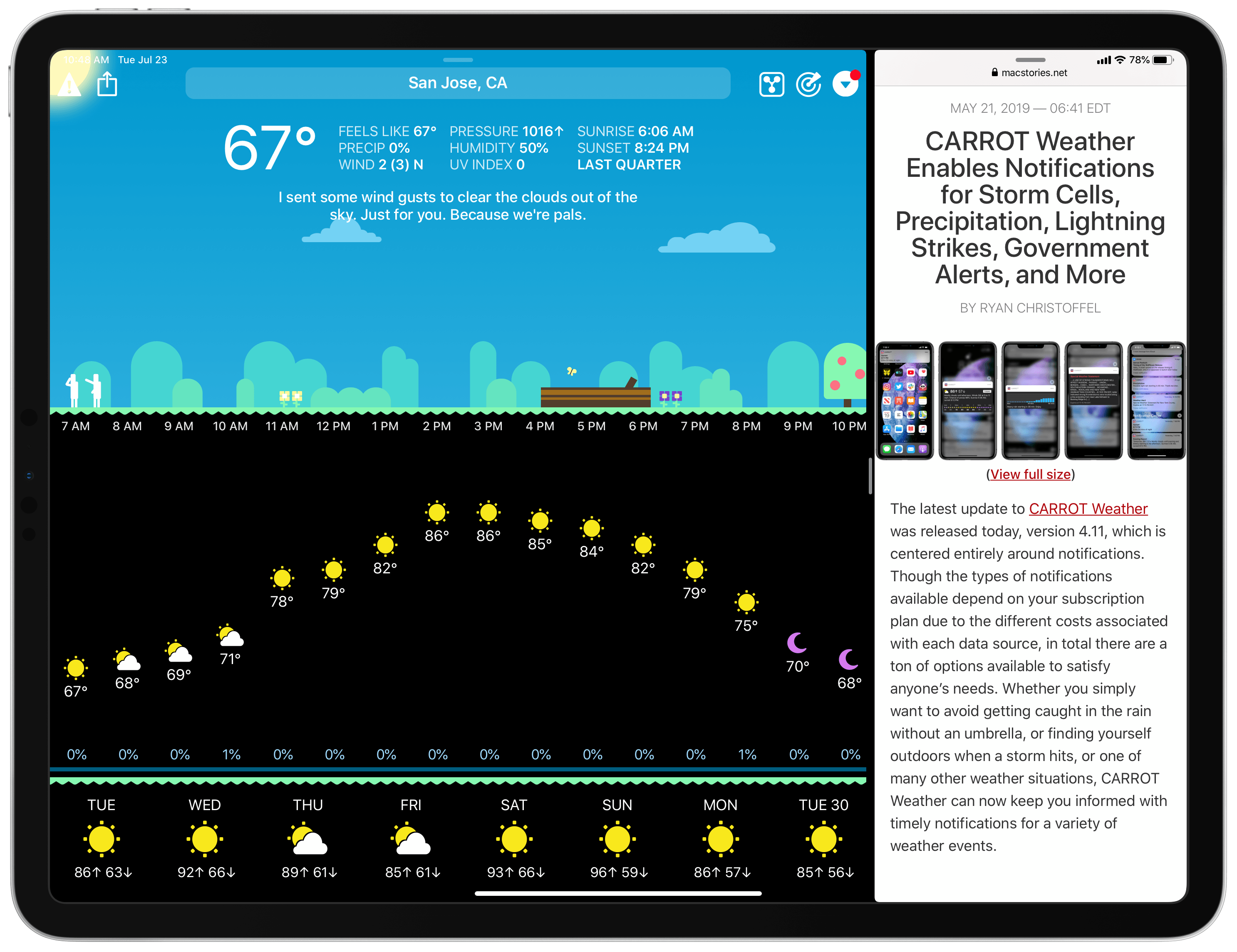 Today in version 4.12, CARROT Weather debuts a modernized iPad app that takes advantage of the features core to a great iPad experience: multitasking support, more keyboard shortcuts, and a tweaked design that better utilizes large displays. Additionally, since the iPad app is maturing in several key ways, CARROT has added iCloud sync for all of the app’s 150+ settings options, ensuring you won’t need to configure settings on both iPhone and iPad.

Before now CARROT Weather’s iPad app has mainly been a larger version of its iPhone counterpart. You could see more things on-screen at once, but the app still lacked in several key ways. One of those was the absence of support for Split View and Slide Over multitasking, which are both available now. While I likely won’t put CARROT in Split View often myself, which is why I didn’t miss the feature much before now, the app makes a great Slide Over candidate – especially in iPadOS 13 where you can have multiple Slide Over windows open at once.

Several keyboard shortcuts were offered in the previous iPad app, but more have been added in today’s update. Joining the existing options to open Maps, Alerts, cycle through locations, and more, there are now shortcuts to view weather for your current location, go straight to the Achievements, Notifications, and Settings screens, and there’s even a shortcut for poking CARROT’s ocular sensor. While I would have liked to see shortcuts taken even further – for example, enabling navigation of what’s on-screen or in menus via arrow keys – what’s included is a solid step forward.

Taking better advantage of the iPad’s display is another improvement in today’s update. The changes aren’t significant, but as you can see in the side-by-side screenshots below, the updated app supports adding more data points to the screen, all of which can be customized to your liking, there’s a new pop-up day details screen, and it adapts well even to reduced sizes in Split View.

Introducing a more robust iPad app wouldn’t be complete without another improvement: iCloud sync for the app’s settings. CARROT offers over 150 different settings that can be configured to your liking, so having to manually set those up on each device would be (and has been) a pain. The timing was definitely right to introduce iCloud settings sync. You can also now restore settings from a device backup if that’s of use to you.

One other iPad feature worth noting: if you’re a Tier 3 subscriber, you can activate automatic foreground refreshes of the app, which is best applicable when using an iPad as a mounted, always-on display that can now show you the most current weather automatically.

CARROT Weather for a long time has pushed for excellence on both the iPhone and Apple Watch, but the iPad and Mac versions have lacked the same level of attention. It’s great to see that start to change with this update, which brings the iPad up to par with many of the modern features iOS enables for Apple’s tablet. Perhaps this fall with Catalyst launching as part of macOS Catalina, CARROT will get some extra love on the Mac as well.