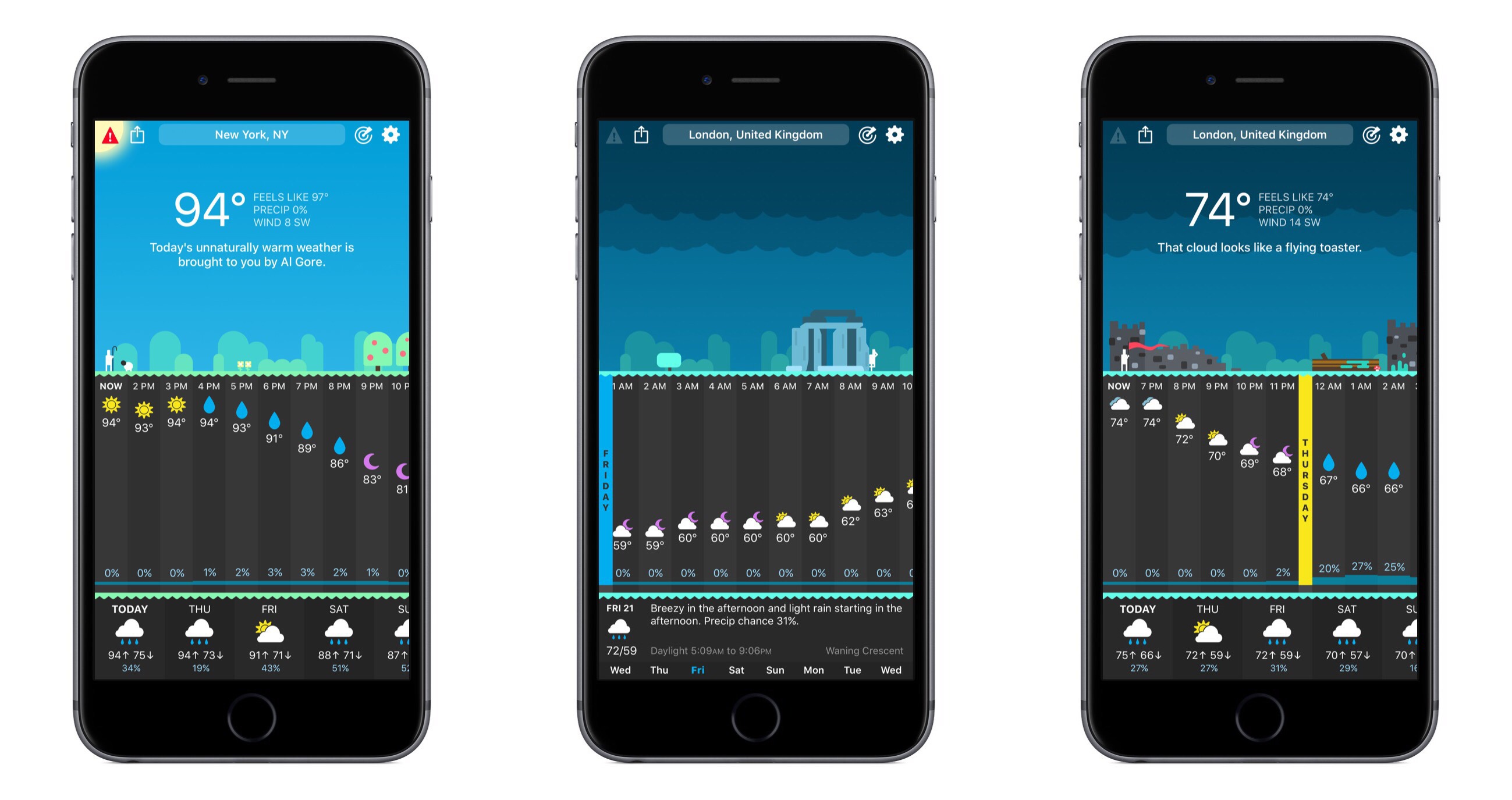 The snarkily clever weather app, CARROT Weather, was updated to version 4 today, and with that update comes a full redesign. The core piece of CARROT’s identity – its sarcastic A.I. – is still here, as are the beautiful graphics of past releases, but outside of that a lot has changed.

According to developer Brian Mueller, the top goal of this release was to make all important details visible on one screen. Past versions of CARROT contained a minimalistic landing page containing simple information about the current temperature and weather conditions accented by a beautiful illustration. CARROT always looked attractive to me, but its main interface never fit with the way I prefer my weather apps to function. My normal pattern for tracking the weather is to have an app’s widget installed near the top of my widget list so I can sneak a quick glance at current conditions without opening a full app. After seeing that basic data in the widget, if I want a bit more I’ll tap on the widget to open the full app and its additional information. The problem for me with CARROT in the past is that opening the full app wouldn’t immediately give me the extra data I was looking for; instead that data was hidden in the extra panel that slid up from the bottom of the screen. But CARROT 4.0 changes that, much to my delight.

CARROT’s implementation of a one-screen interface is a noteworthy design achievement. It doesn’t feel overcrowded in any way, yet it still provides plenty of information at a glance. There’s a beautiful illustration at the top of the screen that demonstrates weather conditions, overlaid with the actual and ‘feels like’ temperatures, the precipitation chance, wind speed and direction, and a one-liner condition summary from CARROT’s A.I., such as, “It’s partly sunny. Yay sunburns!” Immediately below this top section is an area that provides an hourly breakdown for the day, and just below that is an area detailing the next several days. Both the hourly and daily summary sections can be navigated by swiping horizontally to view additional information from future days, and you can tap on any particular hour or day to reveal more information about it, all without ever leaving the one main screen. 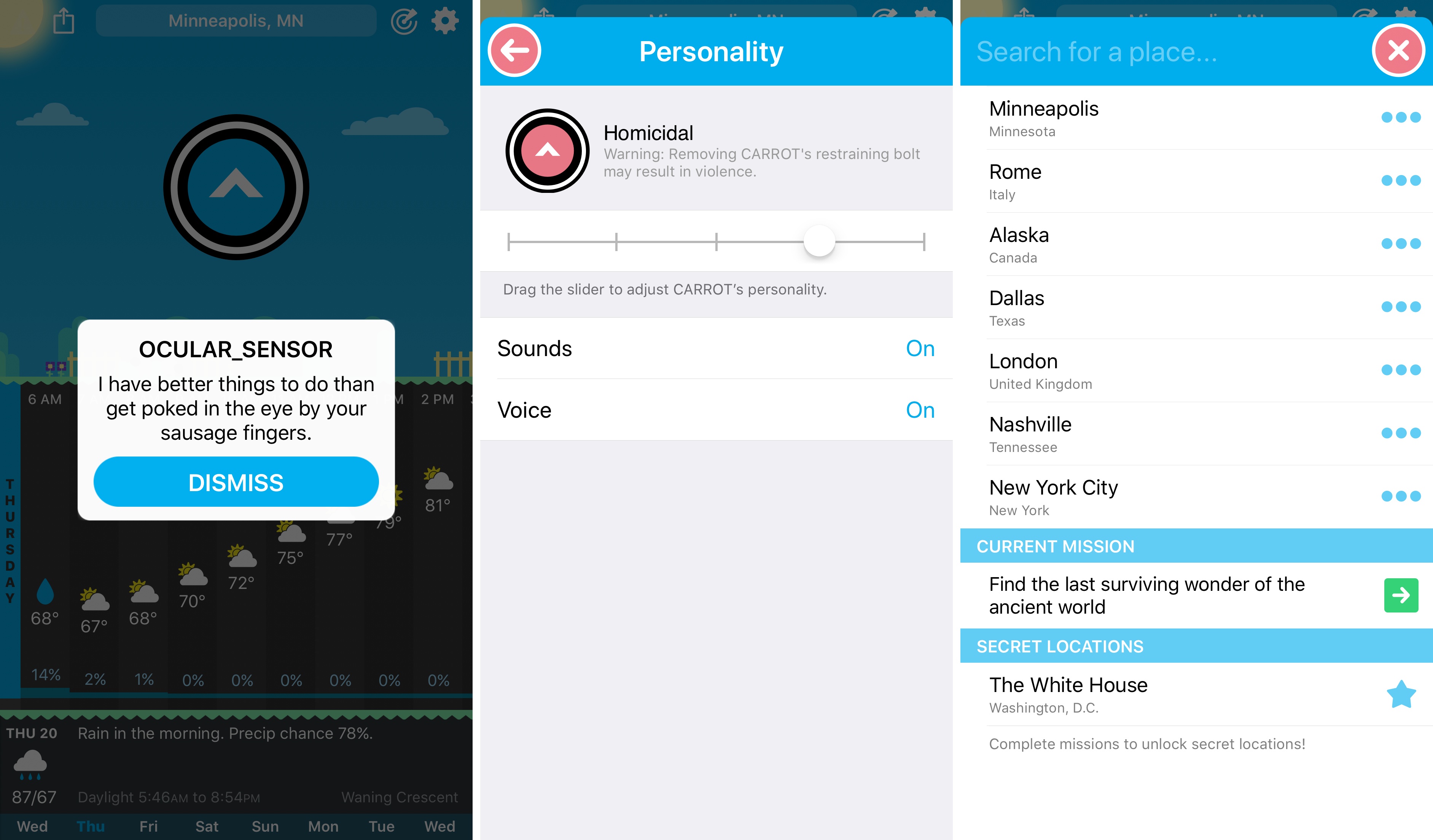 CARROT has long been known as a weather app with personality, and that is now truer than ever – in a couple different ways. First, the actual personality of CARROT’s A.I. can now be customized to one of five different options: Professional, Friendly, Snarky, Homicidal, and Overkill. It also includes more than twice as much dialogue as it did before to help ensure that you don’t get repeats of dialogue you’ve already heard.

The second distinguishing characteristic of CARROT involves a clever touch of visual design. The entire UI of CARROT resembles a traditional 2D platforming game like Super Mario Bros. or Sonic the Hedgehog. The interface is, in a sense, one big illustration. The top section shows the sky, complete with clouds floating through it, the hourly section just underneath is designed as a land mass, and on that land mass, at the point where the two sections meet, sits a layer of grass. This layer of grass is host to a variety of scenes involving a mixture of people, trees, flowers, bushes, and more. You may see a person flying a kite, or two people sparring, or a lone sheep stranded on a floating platform. It’s all contextual based on the current weather of your currently selected location. And as you scroll through the interface by swiping through the hourly forecast, you’re swiping through one big, connected landscape. It’s a brilliant effect, and one that makes the app a delight to use. 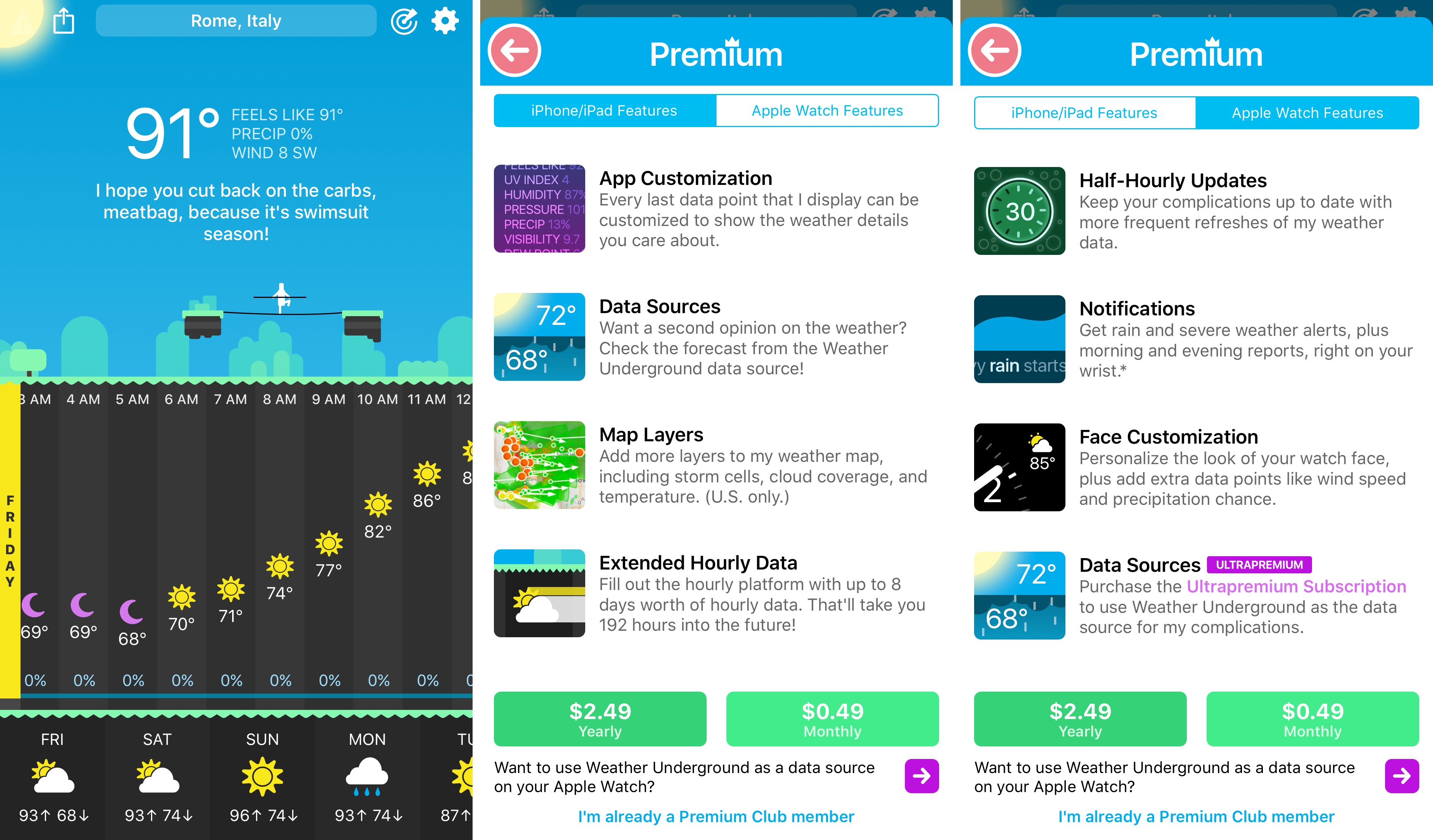 One other significant change in CARROT 4.0 is that the app’s optional Premium Club subscription is getting expanded with new perks. For many people the most exciting feature unlocked via subscription will be the option to use Weather Underground’s data rather than the default from Dark Sky. A subscription also enables an amount of app customization that will make even the most obsessive impulse happy – practically every data point of both the iOS and watchOS apps can be customized to your liking. Notifications are another subscription perk, allowing you to receive updates about incoming rain, official U.S. weather alerts, and both morning and evening reports at a time of your choosing. Nearly all of these features are unlocked with a $2.49/year or $0.49/month subscription. The only exception is if you want to use Weather Underground data on an Apple Watch – in that case, the cost is $9.99/year or $1.49/month due to the significant extra cost of Weather Underground data, and the fact that an Apple Watch will be refreshing that data over 50 times per day.

There are a lot of great weather apps available on the App Store, and often many different apps share data from the same sources, so each app has to distinguish itself in its own unique ways. CARROT Weather does that in spades, with its combination of a gorgeous and easy to navigate UI, a snarky yet endearing personality, and fine-tuned customization options with its subscription plan. There’s also a fun gamified area of the app called ‘Secret Locations’ that receives a major update in CARROT 4.0. All of this adds up to an app with character, laid out in a thoughtful, simple design meant to bring joy to its users.

CARROT Weather is available for iPhone, Apple Watch, and iPad as a one-time $3.99 purchase on the App Store.