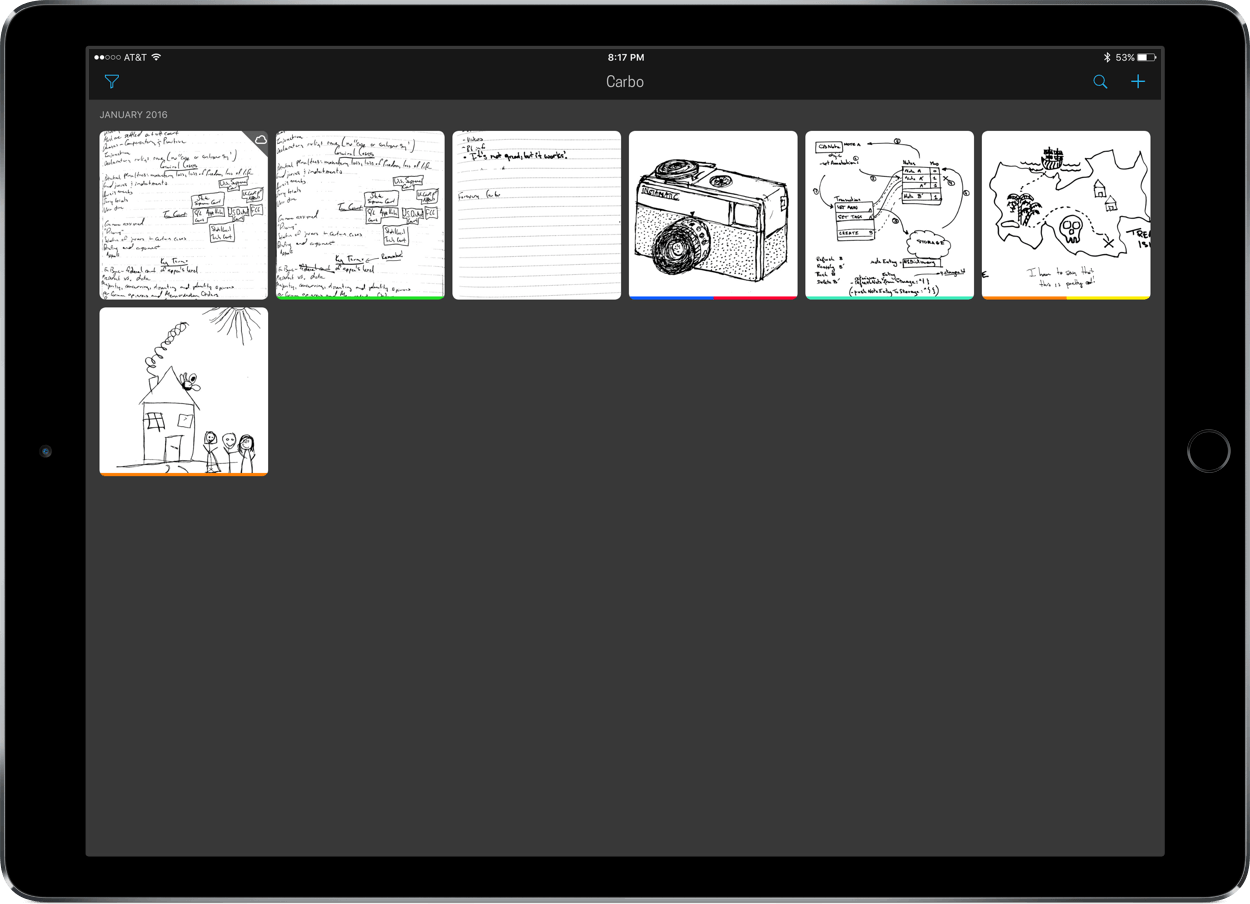 “Handwriting in the digital age.” It was such a claim, along with its feature in Apple’s productivity sale, that drew my attention to Carbo. From reading the app’s description, developers Creaceed seemed confident in the app’s handwriting altering and organization. After spending some time with Carbo and thoroughly enjoying the experience, I now understand their confidence. 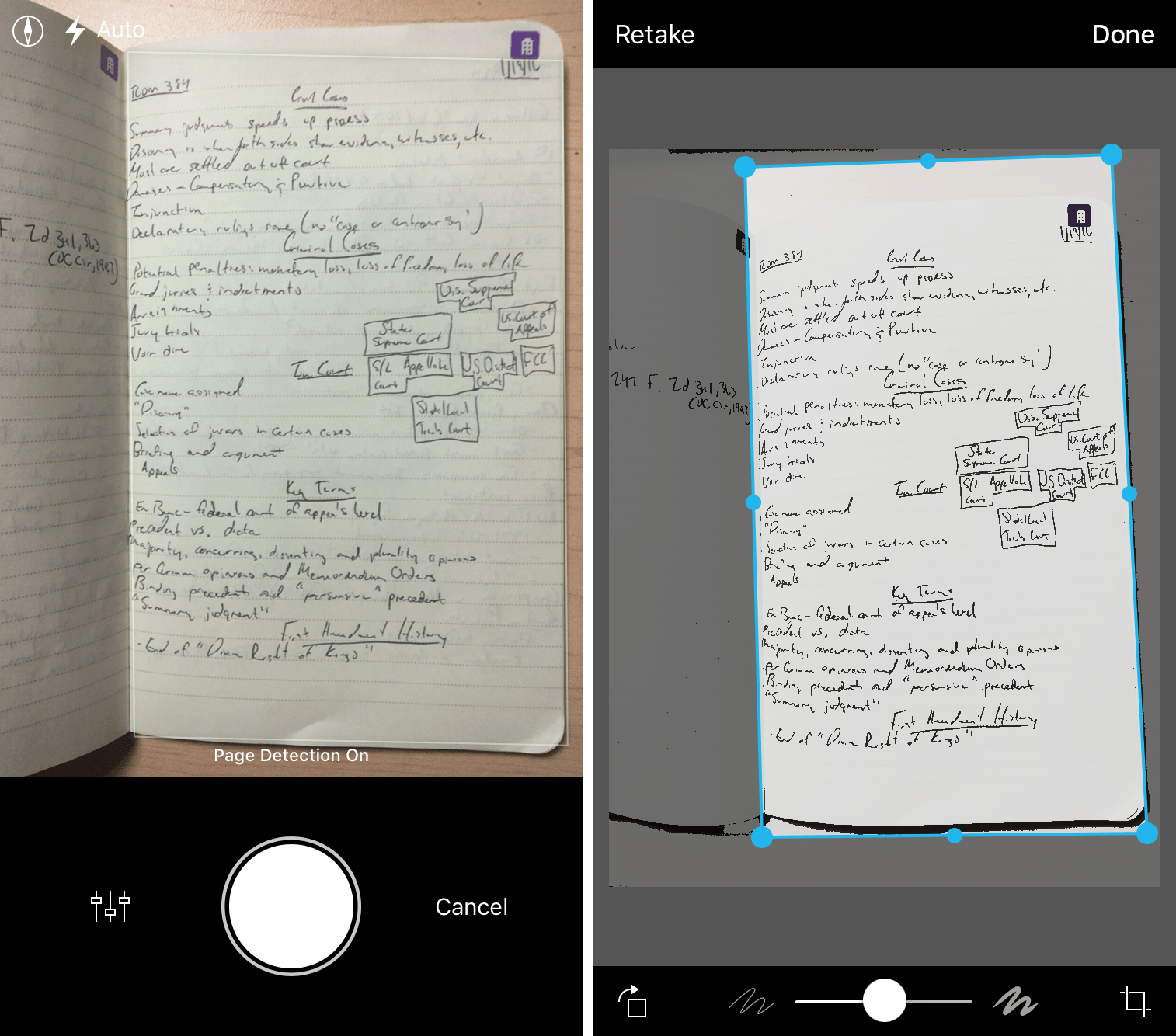 Carbo is, in its most basic functionality, a camera for your handwritten notes. It’s a quick way to capture what you’ve written and import it into Dropbox or Evernote, although the latter has a camera feature within itself. With speed and quick recognition, you can take a photo in Carbo, set document parameters, add a tag and information, and quickly save it away in the app. Because there’s a tagging system, all of the handwritten documents you save will be organized. In a clever move, annotations can also be searched from within the app, through an action extension, or in Spotlight – and all three work as expected.

Of course, most apps in the App Store are faced with competition in functionality; as I mentioned above, Evernote prides itself on importing all of your documents. But what caught me off-guard with Carbo is just how fast the app can get my notes from handwritten to digital, even with document detection turned off by default. When I flipped the switch and let Carbo try to identify where the paper started and stopped, it was impressive. With an added action extension to add a note, it was even quicker.

When taking notes or sketching out an idea, I often run into two problems: general handwriting ugliness and poor planning regarding whitespace. Carbo, in my experience with the app, has improved my notes by tending to these two problems.

After importing a document, Carbo provides the option to pretty up the writing and background material. In a note, tapping the paint palette at the top right of the screen brings you into some customization choices. If you’re satisfied with the current look of your document but would like it in a different format, you can choose from eight selections: default, blackboard, blueprint, letterpress, paper, pixels, skitch, and pop art. Through changing fundamental properties such as text stroke and color along with image background, Carbo is able to put your writing in different contexts for exporting. Some of these are more useful than others, but each have their place for someone. Every option is customizable, too, and this can be done by tapping the switches icon at the top left. From this menu, you can make tweaks that include changing the stroke color, stroke width, paper style, etc.

For those who want to make drastic changes to their notes, the pencil (which is located next to the paint palette) is the menu of choice. Within this editing area, there are four big features: general document navigation, lassoing, writing and drawing, and erasing. While general document navigation and erasing may be self-explanatory, the other two are not only crucial to the app’s experience, but also impressive in capability.

In what I found to be my favorite tool that Carbo offers, the lasso tool allows you to select and move text around your note. By drawing a box around the desired text, Carbo recognizes what’s written and separates it from the group. Then, by tapping and dragging, you can place the writing wherever you’d like on a page. Once the text is selected, it’s also possible to change the stroke width of that particular section as well as delete whatever is inside the box.

Notetakers who may run into space constraints can rest easy knowing that the text’s final location isn’t where it’s written. If I ever had some text written that I wanted to move out of a certain area, the lasso tool did the trick – and did so smoothly.

On some occasions, you may need to add detail to what you’ve written or drawn on a page. Rather than having to fish out the notebook, pencil in additional content, and rescan the entire document, the pencil functionality in Carbo can be used for post-scan markup.

In a wonderful move, Carbo supports the Apple Pencil, meaning that iPad Pro owners can get a more accurate representation of their handwriting. However, the app works just fine without a stylus, so iPhone and smaller iPad users can make changes as well. And for iPhone 6s owners, pressing with various levels of force creates thinner or thicker lines.

Although writing in Carbo is good, it’s not great. At the time of writing, there are only two pencil sizes and no ability to change the color. There were also times I noticed some significant lag.

A Quick Note On Erasing and Clearing

When scanning in documents that have lines or dots, both erasing and clearing (the icon that looks like paper being tossed out) will eliminate the lines. Most of the time, this made no difference to how my note looked, but I understand that this may be an annoyance to some.

Additionally, the photo on the top will replace your photo, not add one. So be careful.

Along with the aforementioned Apple Pencil and action extension support, Carbo also sports Split View multitasking for supported devices. There’s one missing feature that caused me some disappointment: no multipage support. For documents longer than one page, the scans had to be done at separate times and could not be combined.

Carbo is on sale in Apple’s productivity sale – and I cannot think of an app that deserves to be featured more. As someone who is required to take handwritten notes daily, Carbo, despite some flaws, is an invitation into a paperless and organized workflow.

Because of its ability to provide me with cleaner and more refined notes, I highly suggest picking up the app at a limited-time price of $3.99 in the App Store.