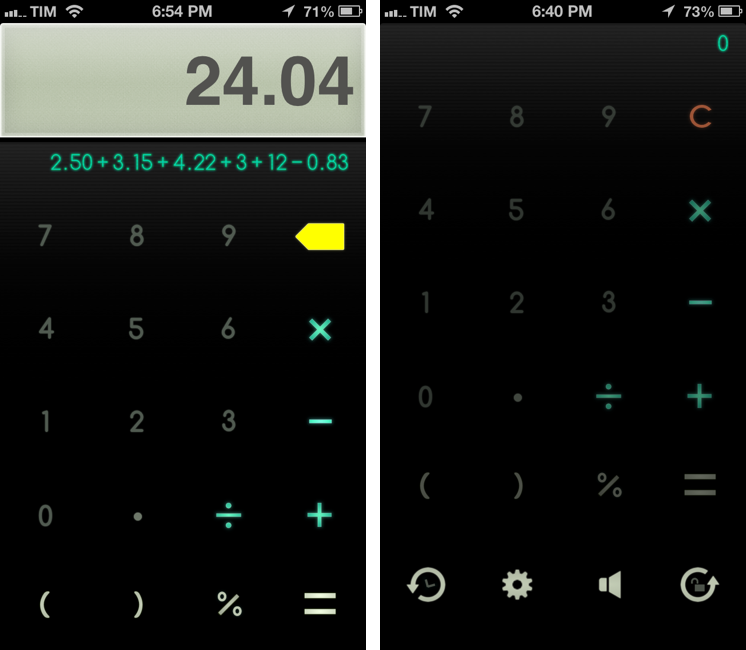 When it comes to iPhone calculators, I have simple needs: they have to help me when I’m buying groceries.

I have been using Tapbots’ excellent Calcbot app for years: unlike Apple’s built-in calculator, it comes with proper support for undo and history, which allows me to easily keep track of the items I’m buying at the grocery store. You could say that, like image editors, I seek out for non-destructive calculators: I want to have access to a stacked list of the single operations I have entered and to be able to delete items inside the expression list. The problem with Calcbot, as I tweeted in March, is that the app still hasn’t been updated for the iPhone 5’s taller screen, and, as MacStories readers know, I can’t stand looking at a letterboxed app on a daily basis. Calcbot works fine, but I wanted to see whether I was missing out on new calculator apps that were ready for the iPhone 5 and had comparable feature sets. Fortunately, I found Calzy.

Soon after tweeting about Calcbot, I received tons of recommendations about various calculator apps worth trying. While I initially settled with Soulver – which I bought years ago – and even used it for weeks in “real life” scenarios, I don’t think Soulver is the best solution for a mobile grocery shopping calculator. Soulver feels cramped on the iPhone’s screen, whereas I want a simple, full-screen solution with large keys and quick access to undo and history. I would buy PCalc if I had more advanced requirements, because the new version looks amazing. But I’m just some guy who regularly buys bread and milk (and, yes, pasta).

Calzy is a $0.99 calculator with some clever touch interactions and a Universal bundle. I don’t need Calzy on the iPad, but it’s nice to see the developers are supporting the platform. Calzy has no customizable themes: the only settings you can tweak are buttons to enable the iOS status bar (I did) and disable a “scroll to tweet” menu that shows interesting quotes you can share on Twitter. I don’t need quotes when I’m buying groceries, so I disabled it.

Calzy’s main screen contains the numeric pad and a display at the top. Basic operations are supported alongside percentages and parentheses. A small touch that I really like is the color-coding: numbers are light gray and they become white when you tap them; operations are blue; parentheses, percentage, and equal signs are white; when the display has no numbers, the “C” button is orange, but it becomes a big, yellow backspace as soon as you add an operation.

Upon tapping numbers, you’ll notice that Calzy has some nice sound effects within the range of “woops” and “blops” (at least, that’s how I picture the onomatopoeia in my head). While likeable, sounds can be distracting – or maybe you just don’t want other people at the store to look at your iPhone while waiting in line. You can disable sounds by swiping up from the bottom to reveal a drawer that also contains buttons for rotation lock, settings, and history. When revealing the bottom drawer, Calzy cleverly snaps the inline expression viewer to the top of the screen, so the main display will be hidden, but you’ll still have some context as to what you were doing. 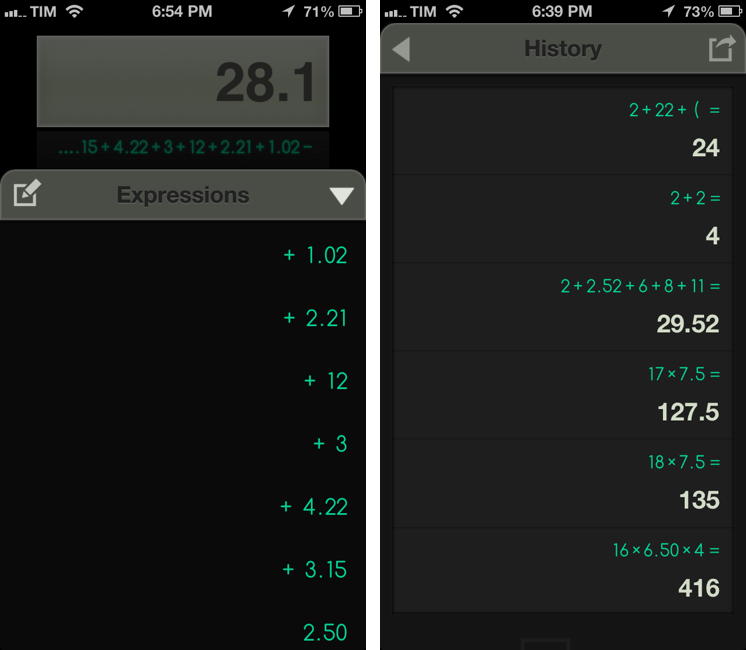 I use Calzy because it blends powerful features with delightful gestures and animations. For instance, the app comes with full undo/redo support: to activate this, you can swipe right or left, respectively. If you want to clear an entire expression quickly, you can tap & hold the backspace button. And – my favorite feature – if you need to edit, not just view, single items in the current expression, you can tap & hold on the display to bring up the expression editor (with another sweet animated transition). From the editor, you can swipe to delete numbers or use a button in the top left to achieve the same functionality.

I have been using Calzy as my only iPhone calculator for the past two weeks, and I like it. The expression editor allows me to have an easily accessible, clean-looking view of the items I’m buying, and the gestures have enabled the developers to eschew a complex interface in favor of a minimalistic approach that, however, isn’t devoid of useful features. If I ever need to find an old expression, the History section allows me to copy it again, or email it to someone else.

I know that there are more feature-rich and powerful calculators on the App Store, but Calzy satisfies my simple needs exceptionally well, and I highly recommend it.