I wrote many times how much I’m into Ember app: it’s a great place to find inspirational stuff and work in progress screenshots of Mac and iPhone applications. So, the other day I was browsing the Images section and stumbled upon this screenie of a RSS app for Mac  I never saw before: damn, it was sexy.

I tried to gather some additional info and I found out it was a screenshot of a working build of Caffeinated, an application that’s being developed by Curtis Hard. He was so kind to give me a quick preview of Caffeinated and guys - this one’s gonna be amazing.

Caffeinated syncs with Google Reader, like almost every RSS app does today. The cool thing is, it’s created with the Mac OS experience in mind: it’s 100% Cocoa, everywhere. I mean, the first thing you’ll notice it’s the UI: it’s so slick. And I must admit it was also the main reason why I contacted Curtis, ‘cause I had a so gorgeous RSS application. See the screenshot below to believe me. (which is obviously a work in progress, things are surely gonna get even better) 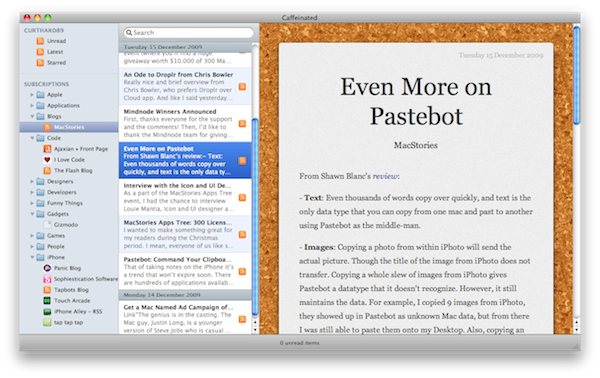 Delving deeper into the UI, Caffeinated has a 3 panels view: sidebar for feeds, mid panel for unread posts and the single feed on the left. Speaking of the middle panel, Curtis implemented some iPhone OS-like sticky table headers, which means they’ll stay on top whatever you’re doing. Awesome. For the single feed, this is where Caffeinated stands out from the crowd: it’s absolutely focused on the content. No clutter, no additional and useless stuff. It’s meant for people who seriously care about reading what the feed service offers them.

And yes, before you ask: Caffeinated is themable. Do you know what this means? It means a stunning default theme first, then a ton of user-made facelifts. If Bowtie got like 1000 themes, how many an RSS reader is going to get?

Overall, Caffeinated could really be one of the best applications of 2010.

You just have to wait some more.