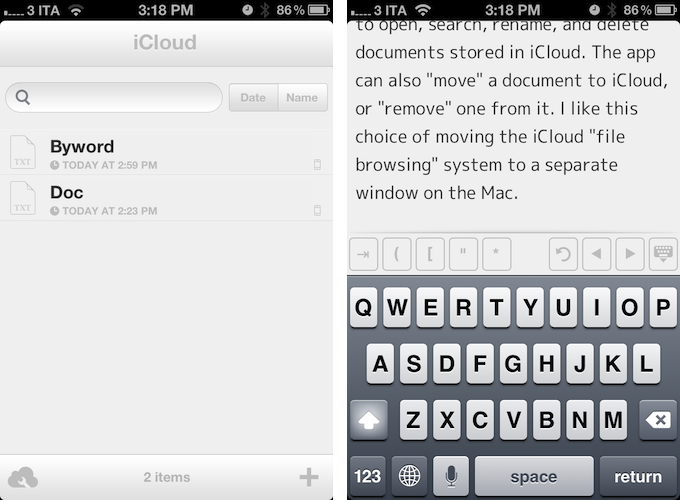 Byword, the Mac app that I used last summer to write my MacBook Air review, has been updated today to include iCloud syncing on the Mac, and support for a brand new iOS app that briefly went live on Saturday, was pulled, and now is back on the App Store at $2.99.

Byword is a minimal text editor that works with the Markdown format and allows for easy exporting of plain text to a variety of formats including HTML, PDF, and LaTex. Unlike most minimal text editors these days, Byword for Mac has become popular among writers and bloggers (also) thanks to extensive support for keyboard shortcuts, built-in Markdown preview, and integration with Lion’s full-screen mode, auto save, and Versions. We have covered Byword on MacStories before.

The iOS version of Byword runs as a universal app on the iPhone and iPad, and I have been able to test it since its first release last week. Despite some initial issues with iCloud syncing, I was able to activate the functionality, and sync text documents across devices using Apple’s cloud service and Dropbox, which is also natively supported inside the app. Having tried both solutions, I can say that whilst the developers ensured the two syncing services would appear as “invisible” as possible to the user, iCloud seems a little faster at pushing and picking up changes made on another device. On iOS, upon first launch the app will ask you to choose a syncing service between iCloud and Dropbox – alternatively, you can go with none and save documents locally. If you choose iCloud, which I did, the app will show documents stored in the cloud from a sidebar on the iPad, or a dedicated screen on the iPhone. On both devices, you can switch back and forth between the browsing and editing interface with a single swipe on screen – I found this very intuitive and responsive. Syncing between iOS devices through iCloud has been remarkably stable for me in the past few days, allowing me to effortlessly push changes to this very article around in seconds. I also like how Byword for iOS is capable of updating changes “live” inside your document even if it’s already open but being edited on a second device.

On the Mac, the 1.5 update released today on the Mac App Store brings a series of enhancements to text editing (including text zoom, autocompletion disabled by default, and support for MultiMarkdown 3.3), and, more importantly, it also adds iCloud compatibility to make Byword for Mac work with the iOS counterpart. Aesthetically, Byword 1.5 looks the same – the Mac app still has two themes, a decent selection of fonts, and three width options. To open documents from iCloud, however, the developers had to add a new iCloud Open panel, which can be invoked from the menubar, and consists of a standalone window that allows you to open, search, rename, and delete documents stored in iCloud. The app can also “move” a document to iCloud, or “remove” one from it. I like this choice of moving the iCloud “file browsing” system to a separate window on the Mac. 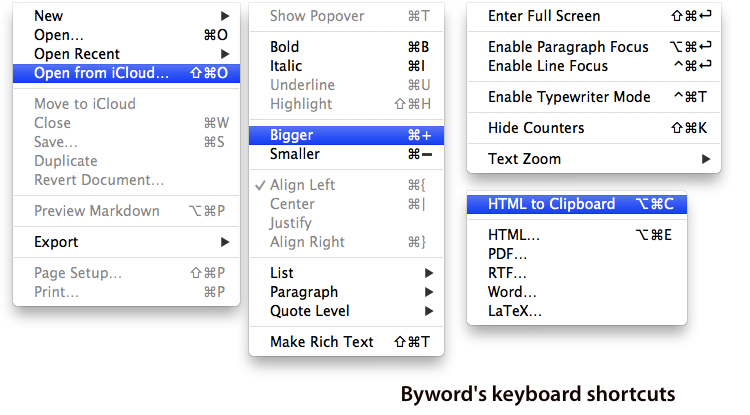 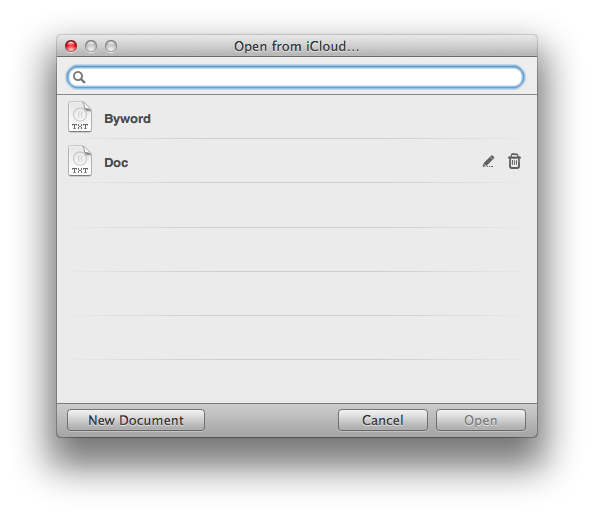 Because Byword for Mac has auto save, you won’t need to hit CMD+S when you’re writing a document stored in iCloud. If you quit the app while you’re writing, changes will be pushed to iCloud anyway, enabling you to pick up a document from your iPhone or iPad.

As expected, the iOS version of Byword doesn’t have all the features and shortcuts seen on the Mac. Whereas Byword for Mac is appreciated among lovers of fine keyboard shortcuts for the power user-oriented tools it puts at their disposal, Byword for iOS couldn’t obviously sport such features, so the developers had to revert to a perhaps less innovative, but still handy extra keyboard row to include tappable, visible shortcuts on screen. There are keys for oft-used Markdown keys, and a keyboard dismissal button on the iPhone as well. This extra row, when swiped across, will reveal a word count – smart choice. The iOS app doesn’t preview Markdown as you type, but it’s got a Preview option in the Settings, as well as support for printing, TextExpander, four fonts, and various exporting options including HTML, plain text, and rich text.

In writing a review for Byword, I found it impossible to avoid a comparison with iA Writer, which also recently became available on the iPhone. So here’s my take on this. I think Byword and iA Writer certainly overlap in many aspects: iCloud and Dropbox support, minimal approach to elegant text editing, full-screen mode on the Mac, and an overall focus on what’s being written, rather than what the app looks like. There are, though, some important differences to consider. Byword provides more – for the lack of a better term – “options” when it comes to manipulating content on the Mac, and exporting text (on both versions). The Mac app has got more keyboard shortcuts, the exporting options are more or less the same on OS X and iOS, and the iCloud Open panel is a great idea. On the other hand, iA Writer, I believe, focuses more on text alone by design, being an app that is “about you, the writer, and the app, the digital writer”. Byword wants to be a minimal text editor with a variety of options that don’t get in the way, but still appeal to power users (shortcuts, Markdown previews, exporting features). iA Writer gets rid of options voluntarily to put greater focus on your words. You know what category of user you fall into, and if you don’t, our previous coverage might give you an idea.

Byword for iOS is a fine app. In fact, if you are looking for a Markdown editor with exporting options that has native iCloud and Dropbox support across Mac and iOS, this may be your best choice right now. I’m told more is coming soon, and I wouldn’t be surprised to see lots of minor features and refinements being added now that the app is out.

You can get Byword for iOS at the introductory price of $2.99 on the App Store.