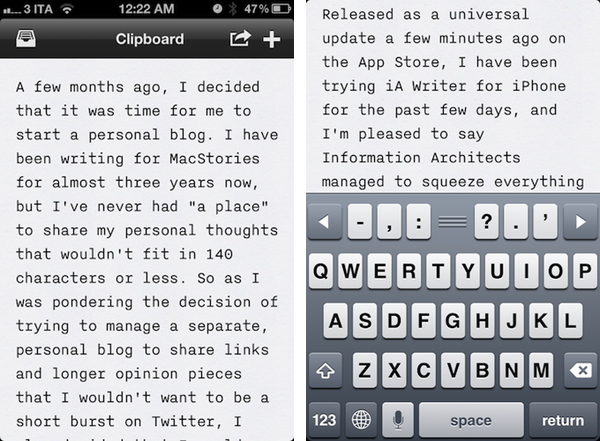 A few months ago, I decided that it was time for me to start a personal blog. I have been writing for MacStories for almost three years now, but I’ve never had “a place” to share my personal thoughts that wouldn’t fit in 140 characters or less. So as I was pondering the decision of trying to manage a separate, personal blog to share links and longer opinion pieces that I didn’t simply want to be short bursts on Twitter, I also decided that I would write such weblog exclusively from my iPad. The experiment has been a success so far, and that’s largely thanks to iA Writer, which starting today is also available on the iPhone.

Released as a universal update a few minutes ago on the App Store, I have been trying iA Writer for iPhone for the past few days, and I’m pleased to say Information Architects managed to squeeze (almost) everything that makes iA Writer great on the iPad and Mac (our coverage) into the iPhone’s smaller screen. Not only does iA Writer look great on the Retina display – it’s also functional and easy to use.

There isn’t much to say about iA Writer if you’re familiar with the iPad and Mac versions. It’s a minimalist take on plain text writing that focuses on letting you write without distractions with great typography, and only the essential features. There’s no cluttering interface with too many options. If most text editors and writing tools want you to feel connected with the web by adding social sharing functionalities, search look-ups, and various integrations with different services, iA Writer wants you to feel disconnected from the Internet’s noise to reconnect exclusively with what’s in front of you: text. Your words.

It’s called iA Writer for a reason – it’s about you, the writer, and the app, the digital writer. Everything else is secondary. That’s how I see this app.

This concept has been ported well to the iPhone. iA Writer can sync documents with iCloud and Dropbox across devices, and both are fairly reliable at keeping changes up to date and ready to be modified. Dropbox, as usual, can be slightly more “manual” in that iCloud is “invisible” in pushing and receiving changes automatically, all the time. Fortunately, iA Writer for iPhone has also a sync button, so if you’re not sure about the latest change fetched from the app, you can always hit Refresh and check that you’re getting the latest version of a document before you start writing. In my tests, iA Writer for iPhone was able to push changes to the same document already open on other devices, and I’m pretty satisfied with how iCloud sync turned out on iOS and OS X.

The core of iA Writer’s experience has been preserved in making the leap to the iPhone, but something’s got to give when you’re porting an app to the smaller screen. Either that, or iA simply didn’t have time to squeeze in more features – I don’t know, but as it stands now iA Writer for iPhone lacks Focus mode, and support for visual Markdown previews, which are both supported on the iPad and Mac. The iPhone app does, though, feature a custom keyboard with often-used keys placed in an extra row that also contains a drag handle to dismiss it (I love this aspect of the app), and arrows to navigate. The typing view of iA Writer 1.5 is now full-screen, which I think is incredibly better on iOS devices than being forced to always see window chrome. I do wish there was a gesture to quickly close a document without having to pull down the keyboard first, and I would like to see character count and reading time become available on the iPhone as well. I’m a big fan of the app’s separate storage for iCloud and Dropbox.

Ultimately, it comes down to the writing experience, and iA Writer excels at this because it is an app that wants you write more by seeing less. This first version of the iPhone app might not be as powerful as its Mac counterpart, but it sure is a pleasure to look at on the Retina display as what really matters, in the end, is that you’re looking at your own words, and nothing else.