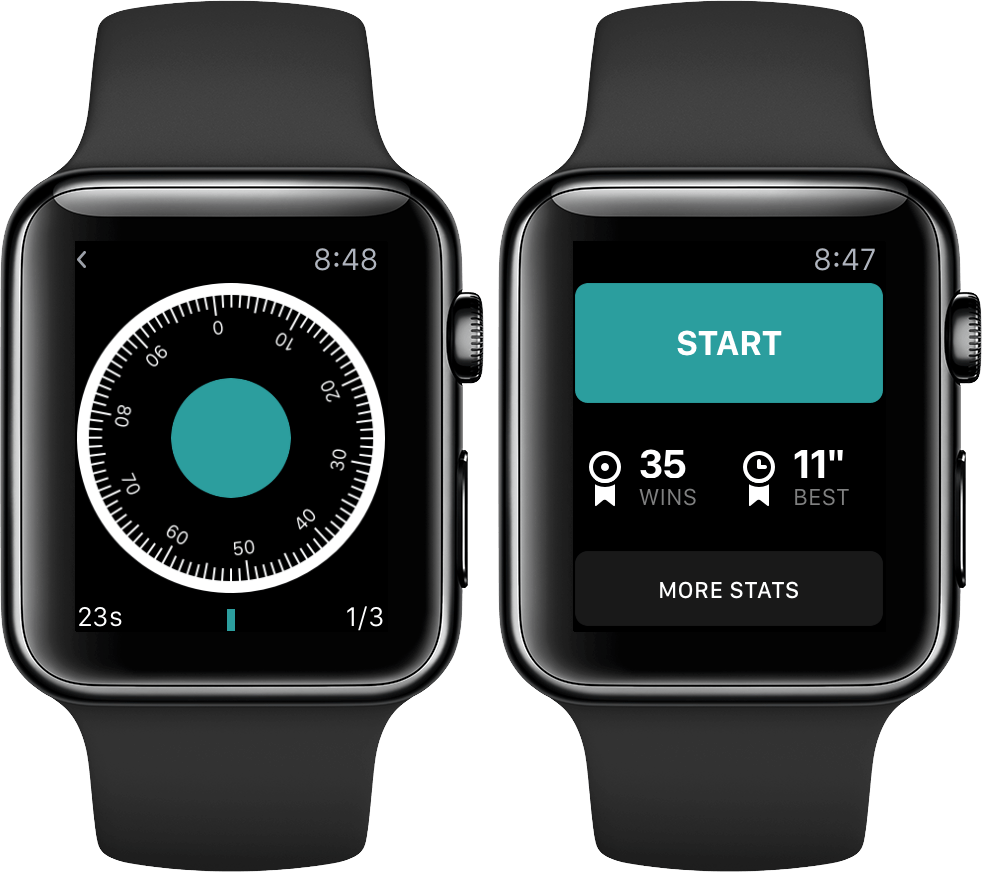 There’s not a lot of good that can be said of the Apple Watch app experience. Although the platform looked promising after the release of watchOS 2, Watch apps haven’t caught on in the way Apple Watch wearers may have liked. While some have tried to attack the problem through unique games or productivity apps, the majority of the offerings have been slow to load and difficult to use.

But, for just a second, throw all of that out and consider Break this Safe – it’s only for the Apple Watch, using the Digital Crown and haptic feedback for its gameplay. It offers a unique gameplay experience and, despite the Apple Watch’s slow loading times, is engaging enough to keep you playing. 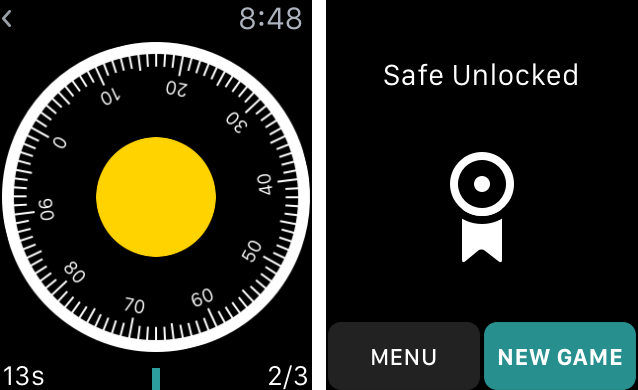 To break the safe and win the game, you’ll be looking to find the combination of a three-digit padlock. In reality, however, the numbers don’t matter much – you’ll need to find your way through by responding to haptic taps.

Spinning the Digital Crown around the virtual lock will initiate taps as you get closer to the number. One tap means that you’re close; multiple means you’ve got it. When you feel the feedback, tap the center circle to indicate that you believe you’ve found the right location. If you’re correct, you’ll move onto the next number. Don’t try to be too quick – selecting the wrong location is an instant game over.

Finding all three numbers in 30 seconds will grant you a win, but it may take some time to earn your first success. Break this Safe is surprisingly challenging, requiring you to trust your sense of touch in a precise way. This can spell trouble for the quick – when the taps are only slightly different, it becomes difficult to finish the game without slipping up.

Break this Safe, although easier with time, will throw a curveball on occasion; after completing the task in a personal best of 11 seconds, I ran into a streak of failure that resulted in some minor frustration. This variation is needed in Break this Safe, as it allows players to feel a continued need for improvement.

Before playing Break this Safe, I was very skeptical on the place of a game on the Apple Watch. After struggling to break my way through the virtual lock, I couldn’t pull myself from the game. The premise, along with the challenge and gameplay, is too unique to ignore – and also much too fun. 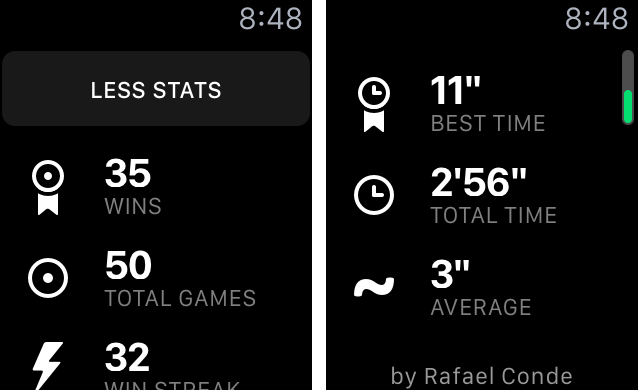 Unfortunately, the last two of these stats don’t seem to hold the highest accuracy; the app told me that I complete a game in an average of three seconds and have only played for less than three minutes (let me assure you that I’ve played much, much longer). Hopefully this is resolved in future versions, as these would be really enjoyable to check out. 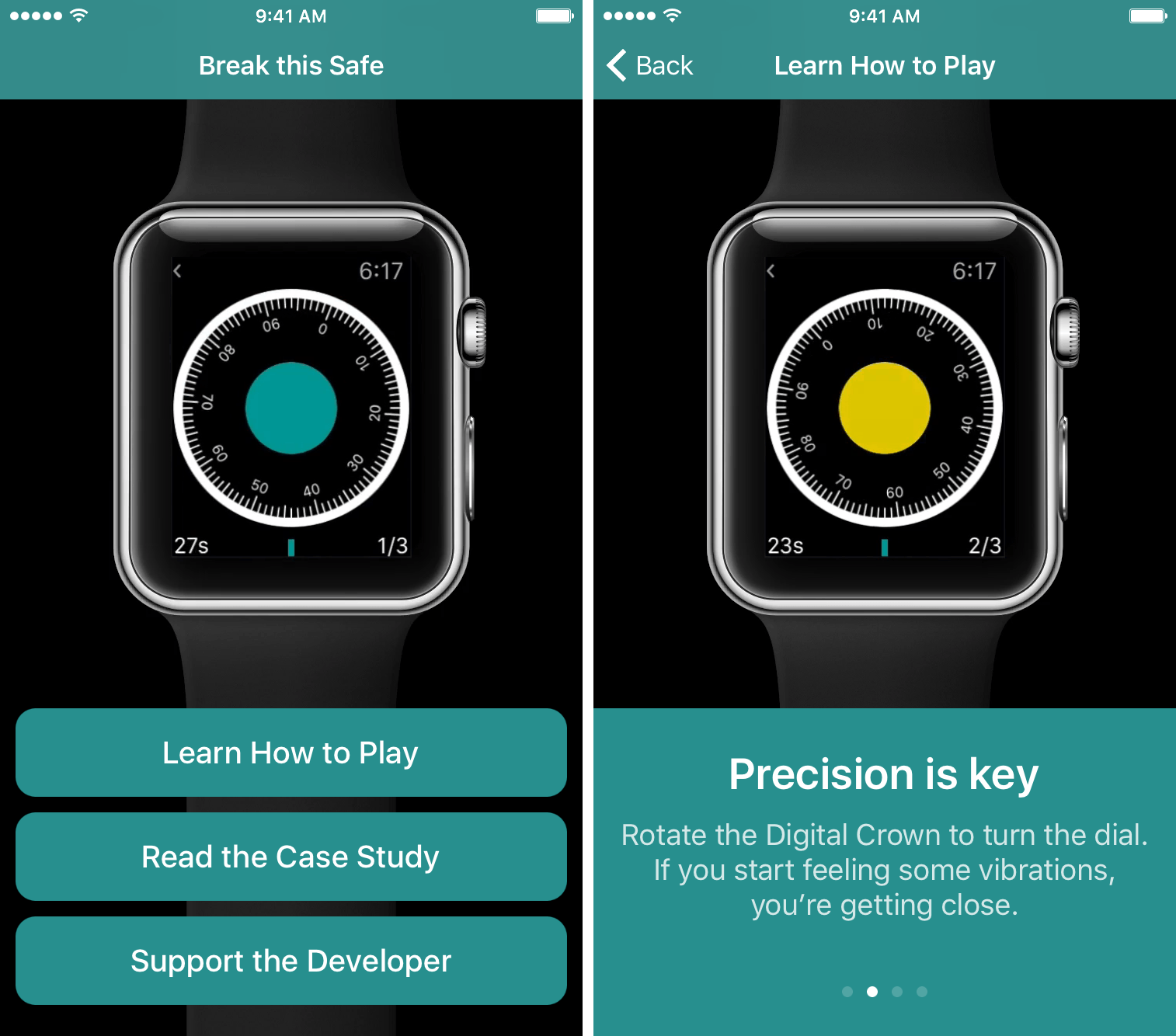 On the iPhone, Break this Safe consists of three options: Learn How to Play, Read the Case Study, and Support the Developer. Each is self-explanatory, displaying a tutorial, blog post, and donation page, respectively.

Occasionally, the app suffers from Apple Watch Syndrome, stuttering on launch or starting a new game slowly. There were even times where I’d start a game only to receive the ever-familiar circles of death – a frustrating and discouraging experience.

For what Break this Safe is, it’s exceptionally good. It is far and away the best game I’ve played on the Apple Watch and one of the best experiences I’ve had with a third-party app. Trying to beat the game has even become a small addiction of mine, consuming little bits of my time. And Break this Safe is free, so it’s a no-risk game with a huge upside.

You can pick up Break this Safe in the iPhone App Store here.