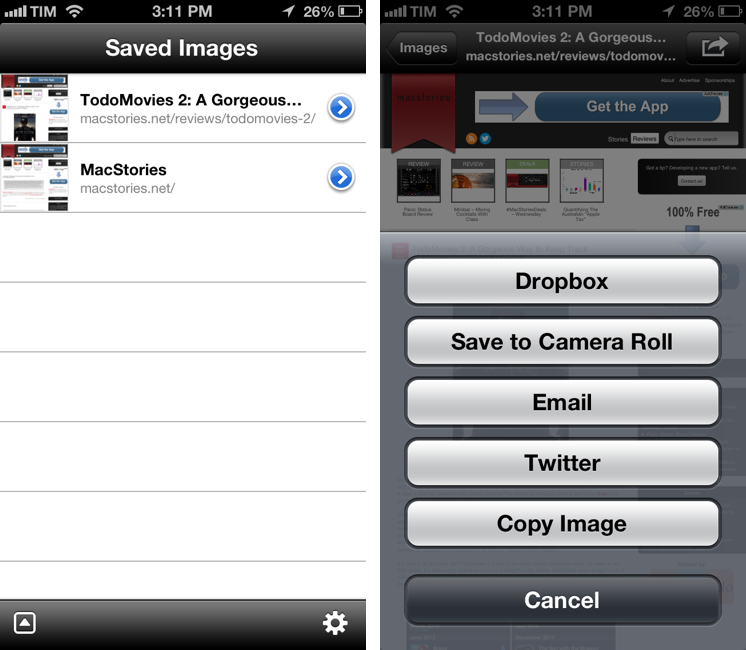 I often find myself having to capture a full screenshot of a webpage (that is, not just the portion that’s shown in the browser, but the full-length site), and while Skitch for iOS is a fine option, I’d like to have an app that’s faster to launch and easier to use. Barry, a $0.99 universal app by North of Three, provides just that kind of functionality.

The app is extremely simple: there’s a built-in browser to open URLs and capture them as images, and a Saved Images area showing the full-size screenshots that you’ve taken. To switch between the two views, you use a button in the bottom left corner of the app; to capture a new screenshot, you tap the aptly named Capture button in the toolbar. There’s no search box in the browser, but the keyboard comes with a Chrome-like additional keyboard row to facilitate typing URLs in the address bar.

What I like about Barry is that it comes with options to determine how images should be exported. In the Settings, you can choose to autosave images to the Camera Roll (it’s Off by default, and I kept it that way) and enable Dropbox integration. By logging into your Dropbox account, you’ll create a “Barry” folder inside Dropbox/Apps; then, when viewing an image, you can tap the Share button and pick “Dropbox” to upload the file right away. Image files will be named using the domain of the website you captured, plus an appended timestamp. From the Share button, you can also choose to send an image via email, Twitter, save it to the Camera Roll, or simply copy it.

Barry comes with a barry:// URL scheme to send webpages from Safari or other iOS browsers directly to the app. The developers have created a bookmarklet that can be installed from the Settings, but, alas, Barry doesn’t support x-callback-url so you’ll have to manually capture a website and go back to the browser.

Alongside callbacks, I also wish the app came with an “Export to PDF” feature and, for power users, more control over timestamp generation. But these are minor quibbles for an otherwise great example of the “doing one thing well” philosophy.[1]

I like how Barry solves a problem I’ve always had with iOS image annotation utilities. The app is only $0.99 on the App Store.