Since SIMBL has been updated for Snow Leopard, I re-discovered many plugins for Mac OS X. Afloat is one of those plugins I tried and deleted because of crashes / bugs.

Now, with a stable SIMBL release for 10.6, I’d like to focus on Afloat, an amazing windows manager for Mac OS X.

Afloat adds many new features to the Window menu you usually find up there in the menubar.

As the name suggests you can keep a window afloat on top of all others but I believe this is not the best feature of this plugin.

Sure, it could be really useful for some people but - truth be told - I think it’s quite useless. 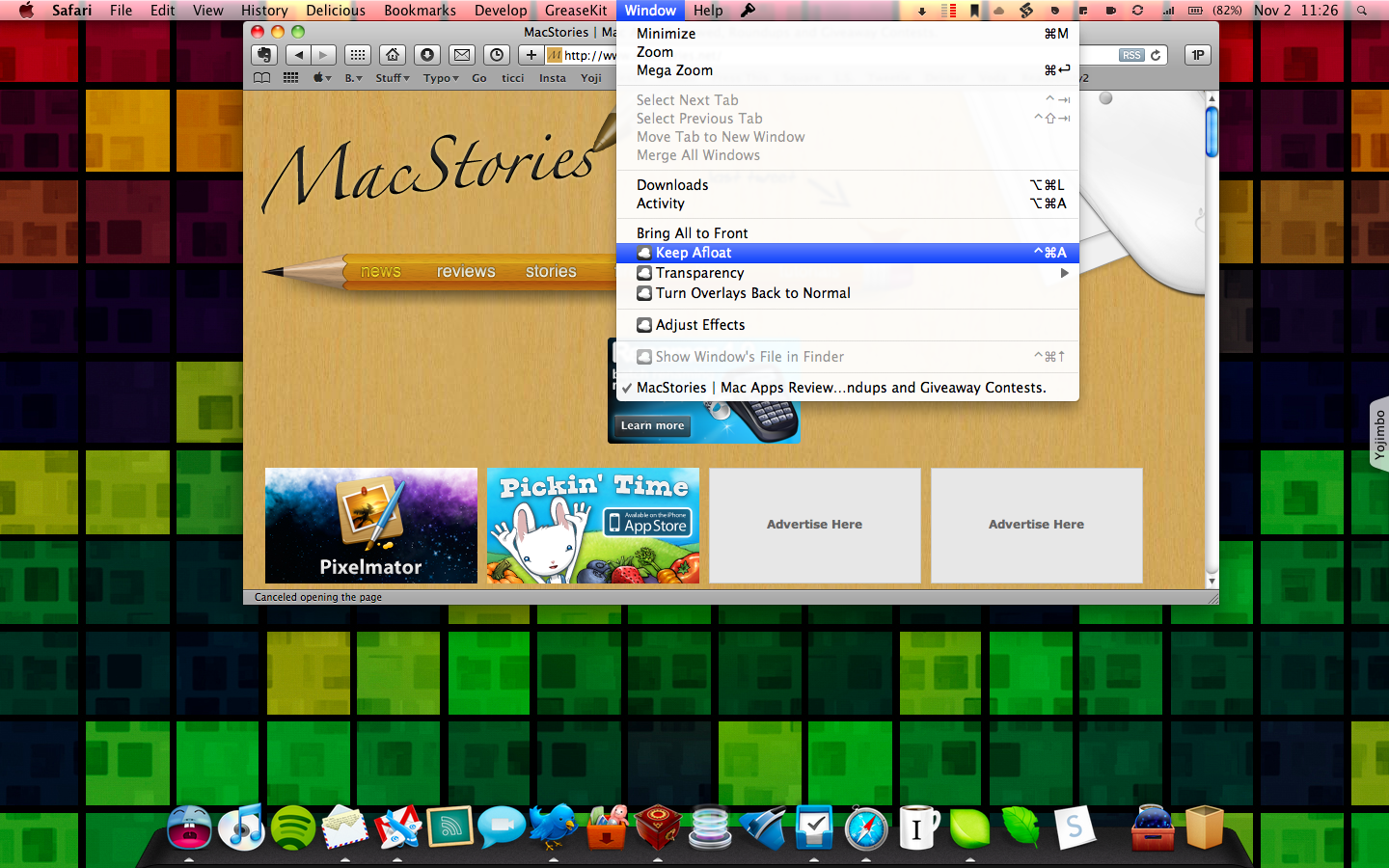 On the other hand, the other features Afloat comes packed with are simply stunning. You can set transparency,overlay, pin a window to the desktop, adjust Spaces settings. Basically, Afloat brings windows management options Apple should have integrated into Mac OS years ago. Anyway, let’s move on. 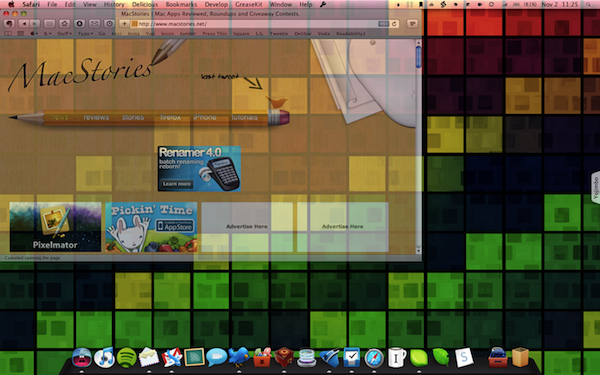 Similar to transparency, you can make a window an “overlay”: this means all the inputs will fall through the window below. For a workflow standpoint, I believe this could be a great feature foe designers / developers who need to open dozens of files and switch between multilple applications. Moreover, you can also choose to keep the window transparent / overlay but make it opaque when working with it. And it works great.

The last option from the Window menu is Adjust Effects which, amongst the features I’ve already talked about, lets you keep a window active on all Spaces. Useful. 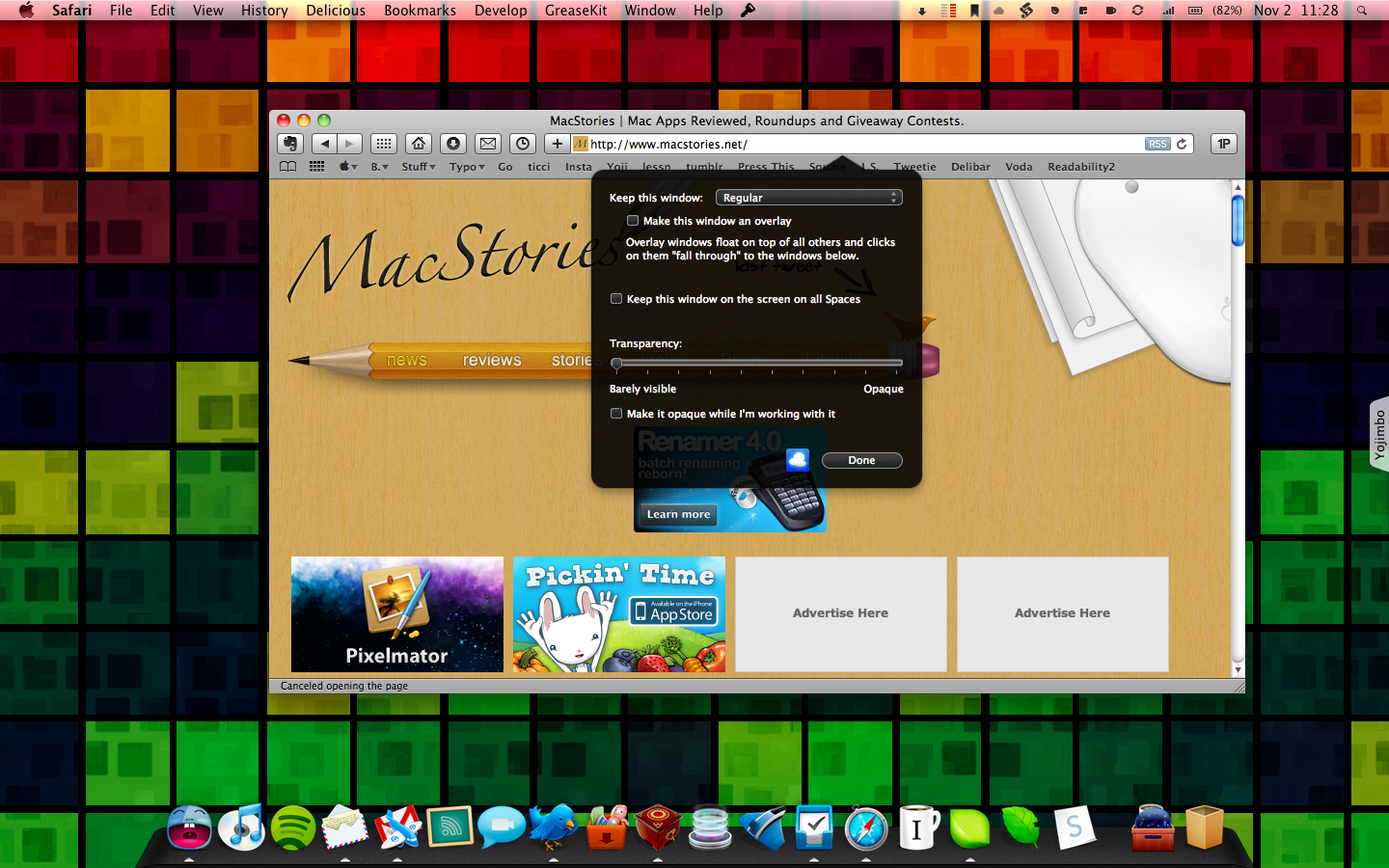 Now, the great thing about Afloat is that it doesn’t simply bring transparency / overlay. You can resize windows from anywhere within the same window, move a window from anywhere instead of the title bar, show a window’s file in Finder.

⌃⌘ + swipe up or down with three fingers.

⌃⌘ + drag the window from anywhere inside it.

⌃⌘ + drag the window with the right mouse button.

During my tests Afloat has been stable and I haven’t experienced any crash or slowdowns. Afloat is free, open source and adds incredible features to the yet amazing Window menu of Mac OS X. Please note that it only works with Cocoa applications.