A few days ago Geohot “announced” his official retirement from the jailbreak scene and there was so much drama around it. First he said the jailbreak tool he was working on didn’t exist. Then he deleted his Twitter account. Then he made the blog private. And, he said that we shouldn’t think about him anymore and follow his good friend @Mikecohen instead. 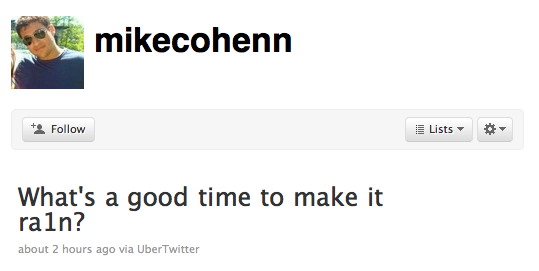 Of course this doesn’t mean that Geohot is back. But, it’s quite interesting that after 10 days from his “retirement”, we’re already hearing of a new jailbreak tool called -ra1n that should be, possibly, out soon.

Could it be that Geohot deleted his Twitter account and closed his blog to come back under a new name, with a new tool? Could it be that he didn’t leave the jailbreak scene at all and he’s just rising the hype for something new coming soon, perhaps even sooner than @comex’s universal tool? I don’t know, we’re just speculating here.

Sure thing is, we miss Geohot. And I have the feeling that he’ll be back, eventually.