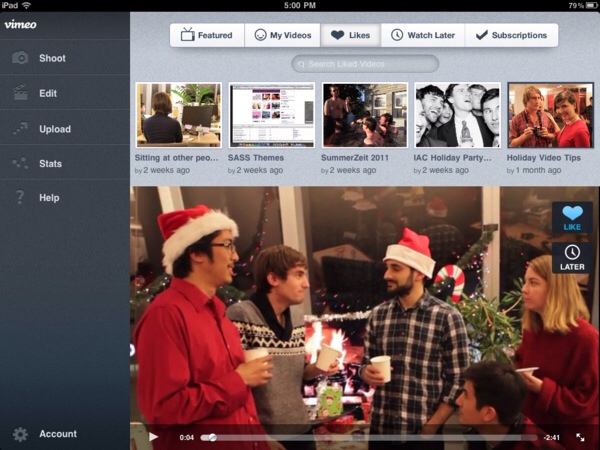 Originally released on the iPhone back in March, today web video platform Vimeo confirmed a major update for the iPhone client, as well as a brand new app specifically designed for the iPad are in the works and should become available “later this month”. The Verge has posted an initial preview of the iPad version, which sports a completely new design, various sharing options, and the built-in video editor that was introduced with version 1.0 for iPhone and iPod touch users.

The Vimeo iPhone app, in fact, besides allowing you to access your Vimeo account and thus check on liked videos, “watch later” queue and items from Vimeo’s popular picks, packs a rather impressive video editor to adjust media on the go and upload directly to the service without using a computer.

Vimeo is also launching apps for Android smartphones and tablets and Windows Phone 7, and it looks like interface-wise, Android and iOS users are at least going to share the same “dashboard grid” paradigm made popular by Facebook and several other iPhone apps.

Judging from the screenshots posted by The Verge, it appears Vimeo for iPad will allow for both shooting and browsing within the same app; similarly to the iPhone app (whose update hasn’t been revealed just yet), iPad users will be able to browse featured videos, liked items, subscriptions, videos saved for later and personal uploads.

Vimeo for iPhone is currently free and available on the App Store.