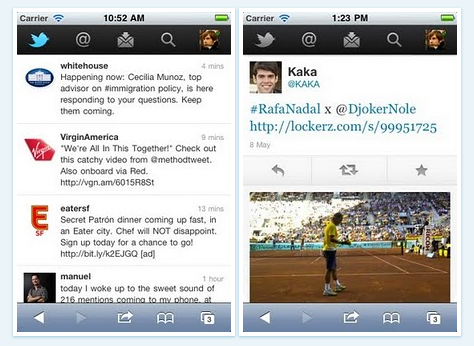 With an official blog post that went live a few minutes ago, Twitter has announced they’re slowly rolling out an updated version of their web app for mobile devices – this time redesigned to resemble the Twitter app for iPhone, but with a tab bar on top, and to feature more HTML5 integration. The web app allows you to quickly scroll the timeline, switch between tabs, check out your profile and even direct messages without leaving Mobile Safari.

We want you to be able to access Twitter no matter where you are; regardless of what device you use; or, whether you prefer to access Twitter through a mobile application or the browser. Today, we’re starting to roll out a new version of twitter.com for mobile devices. This web app allows us to provide a high-quality and consistent Twitter experience on high-end touchscreen devices – whether or not an official Twitter application is available. It was built from the ground up for smartphones and tablets, which have more advanced browsers that support the latest web technologies, including HTML5.

The new web app works on the iPhone, iPod touch and Android handsets, but it’s being rolled out to a small percentage of users today, with more following in the next weeks. Whilst the redesign looks good from the screenshots, there are still some obvious perks in using the native iPhone app, such as inline browsing for media and links or image and video uploading functionalities. Still, this looks like a major improvement over the old version, and we hope Twitter will be faster in rolling it out to all users than they did with #NewTwitter.