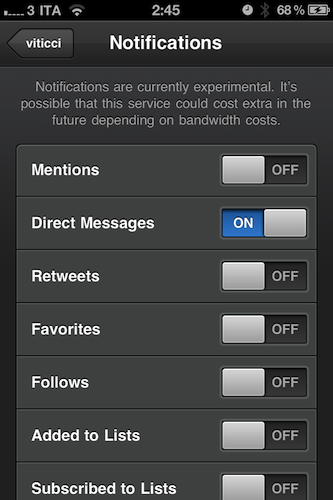 Tweetbot, the Twitter client “with personality” we reviewed a while ago and followed as the developers introduced new features and fixes, has received a major update to version 1.4 that adds a new important functionality, highly requested by the app’s userbase: push notifications. Alongside various bug fixes, selected tabs now remembered when switching accounts, and lists from Twitter users viewable as tweets, Tweetbot 1.4 comes with a new Push Notifications service in the Settings that allows you to be notified about incoming DMs, replies, follows and unfollows, and so forth. The supported Twitter services are many, however the developers have decided to limit the rollout of push notifications for now, mentioning scaling issues and API limitations from Twitter. As Tapbots wants to ensure an optimal experience for everyone, make sure their push notification servers hold up to the new traffic (enabling push notifications for an app – especially a Twitter client – isn’t as easy as most people think) and avoid delays in notification delivery, the initial rollout of Tweetbot push notifications will allow 1,000 users to sign up on a first come, first serve basis. In the following weeks, the limit will be raised to 10,000 users. Please keep in mind that right now – the app has just started propagating in the iTunes Store – notifications might take a while to become active as Tapbots set up the new service.

Tapbots explained the decision on their blog:

Yes, Tweetbot 1.4 has push, but not everyone will have access to it as soon as we launch. We need to make sure our code will properly scale. If we let everyone access the service at once, any small problem on our part may cause the servers to crash. Also, Twitter has only approved us to monitor 10,000 accounts via their site streaming service. Their service is in beta and they need to scale properly as well. We’ll be working with them over the following weeks to increase this limit.

To enable push notifications, and see if they’re still available to new users, head over to the app’s settings, open the Push Notifications panel and try to activate a switch. Furthermore, Tapbots has also implemented nice in-app notifications that will slide from the top of the screen to show you an incoming DM or mention without specific to the Messages or Replies tab. 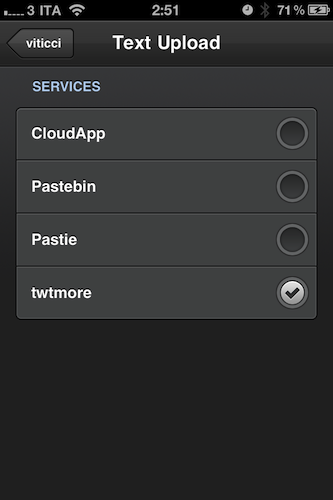 Another interesting addition to Tweetbot in version 1.4 is tweet notes. Users can now attach a note to tweets using services like CloudApp, twtmore or pastebin. Push notifications are a welcome addition to Tweetbot, and we’ll keep an eye on the service as Tapbots scale their servers to accomodate more users. You can download Tweetbot at $2.99 on the App Store.

Update: In a blog post, the Tapbots developers say an issue with the 1.4 build is preventing push notifications from working. An update has been already submitted to the App Store to fix the error.

The push service isn’t working in 1.4. Provisioning profile issues. Human error. We are truly sorry. We submitted a new build with a fix that will work. We’ve politely asked Apple to expedite the process so hopefully the wait won’t be too long.

Update 7/15: Tweetbot 1.4.1 has been approved and it’s now available in the App Store. The new build fixes the issues with push notifications reported yesterday, allowing access to the first 1,000 users to enable them. According to Tapbots, roughly 10 minutes after the release they were already halfway through the initial 1,000 users limit. Check out a screenshot of Tweetbot’s in-app notification banner below. 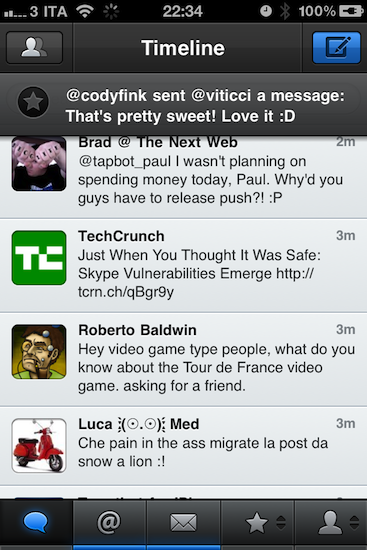