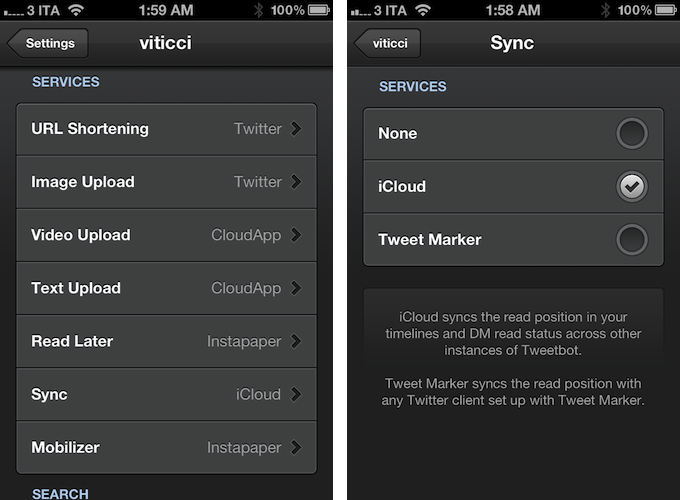 Two months ago, I took a look at the state of iCloud-enabled apps for Mac and iOS, sharing somewhat unsurprising results that showed few applications successfully were using iCloud sync across devices (not to mention platforms), and that developers were frustrated for the lack of extensive documentation by Apple. In these past 60 days, very little has changed on Apple’s side – if anything, we’ve only seen more third-party developers trying to figure out ways to properly use iCloud and make it work in their apps. Tapbots, makers of Tweetbot (our reviews for iPhone and iPad versions of the app), are releasing today an update to their Twitter client, which brings iCloud sync for various Twitter functionalities to the iPhone and iPad.

I have been able to test iCloud sync in Tweetbot for a few weeks now, and whilst I was initially skeptical about the service, I am pleased to report that Tapbots has come up with a solid, clever system that might just convince you switch from Tweet Marker – the only third-party solution to sync Twitter timelines that’s been widely adopted to date – if you’re planning to use Tweetbot as your main client.

iCloud sync, unlike Tweet Marker, works exclusively inside Tweetbot across its iPhone and iPad versions. You won’t be able to start iCloud sync on Tweetbot for iPhone and, say, find your timeline synced on Twitterrific. If you’re still looking for a real cross-platform syncing solution for Twitter, Tweet Marker remains your best option. If you, however, are you using the two Tweetbots as your default Twitter apps anyway and happen to be intrigued by iCloud sync, you might want to consider giving this new option in version 2.2 a try. Once enabled in the Sync settings, iCloud integration will sync mute filters, timeline positions, and DM read status across all instances of Tweetbot. This means that, if you’re using iCloud on your iOS devices running Tweetbot, the app will keep your position in the Twitter timeline synced similarly to how Tweet Marker works, only it will also sync your direct messages’ read status (if you read a DM on your iPhone, it will also be automatically marked as read on the iPad) and mute filters set in the app’s Preferences. In my tests, both Tweet Marker and iCloud have worked reliably when syncing timelines, but I switched to iCloud full-time for the added convenience of syncing DMs and filters across Tweetbot, and because of the lack of Tweet Marker-enabled apps (that I like) on my desktop. In fact, at least for the time being, I’m still using Twitter’s official client on my Mac. With iCloud sync, I can keep more data synced across Tweetbot for iPhone and Tweetbot for iPad, which I use on a daily basis. Please note that, while iCloud is supposed to be “invisible” to the user, working all the time in the background, there may be a short delay of 10-15 seconds when syncing the timeline position across clients, although I have noticed this sporadically. I suggest you use Tweetbot as you normally would, switching from one client to another when you really need to, avoiding keeping both apps open at the same time just to see if iCloud is working.

Version 2.2 of Tweetbot also brings other improvements and bug fixes throughout the app; most notably, images can now be closed with a pinch gesture on the iPad (similarly to how you can close images in Photos) and both iTunes and YouTube links have gained thumbnail previews in the timeline.

For the past months, I have been increasingly using my iPad as my primary computer, and thus Tweetbot has become the Twitter client I spend the most time using on my iOS devices. This newest update increases the overall stability and performances of the app, but more importantly it brings a native, consistent way to sync data across platforms that, at this point, can only get better in the future – and it’s already working admirably now.

You can get Tweetbot 2.2 on the App Store today.