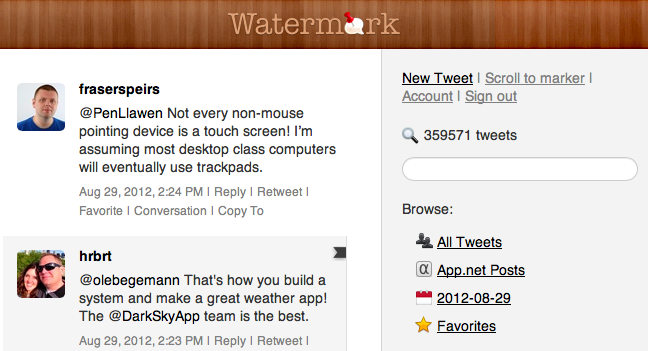 Manton Reece’s Tweet Marker Plus, a service to index Twitter and provide filtering and search tools, has been relaunched as Watermark. As explained by Reece in a post on his personal blog, the new name wants to reflect the “gradual move away from Twitter and syncing”. Initially launched as a free service, Tweet Marker has been integrated as a syncing solution in dozens of Twitter clients such as Tweetbot and Twitterrific. The Plus version, launched in April, built on the success of Tweet Marker to offer a web interface for Twitter timelines, fully indexed by day and searchable outside of the Twitter platform. I wrote:

With the Watermark rebranding, Reece is gradually shifting away from Twitter following the controversy that has arisen in the past months in regards to the service’s API changest and relationship with third-party developers. Keeping the same infrastructure, monthly fee, and core functionalities, Watermark is a new “client and archive tool”, independent of the free Tweet Marker sync service, which will keep working as usual with Twitter apps that support it.

Watermark’s new focus on providing a platform that goes beyond Twitter is represented in this initial version by its support for App.net, Dalton Caldwell’s rising real-time communication service that costs $50 per year. Reece writes:

As part of the relaunch it immediately gains a new feature: App.net posts. You can now add an App.net account and it will download any posts from your friends, making them available for search. Watermark is already storing tens of millions of tweets, and I’m excited to start adding App.net posts to that archive as well.

While still heavily Twitter-based from an interface standpoint, the new Watermark sports an App.net option in the section on the right, where users can browse “all tweets”, favorites, and load past tweets by day with a calendar menu.

Clicking on App.net Posts in Watermark will open a web based timeline; right now, there are no further options available for App.net posts (the service only downloads posts from friends and adds them to the search archive) as App.net doesn’t even have an official search functionality yet. Manton says there’s still “plenty to improve” for App.net support, and that he’s also evaluating timeline position sync for App.net accounts – indeed one of the hallmark features of Tweet Marker.

Tweet Marker Plus was one of my favorite services to provide the kind of Twitter functionalities that Twitter the company always ignored: powerful search and filtering tools, collections, and additional browsing options. Like Cue, Tweet Marker Plus has proven to be a worthy addition to my workflow to retrieve tweets and leverage the information shared on the platform every day. As Twitter becomes more hostile towards third-party developers and apps that take data out of Twitter, it’s great to see Tweet Marker Plus expanding to new platforms. I find App.net very promising in its intent to sell an API as a product to its users, and Watermark can build on the success of Tweet Marker Plus to perfectly integrate with the service, free of the restrictions and “requirements” of Twitter.

Watermark is $5 per month.