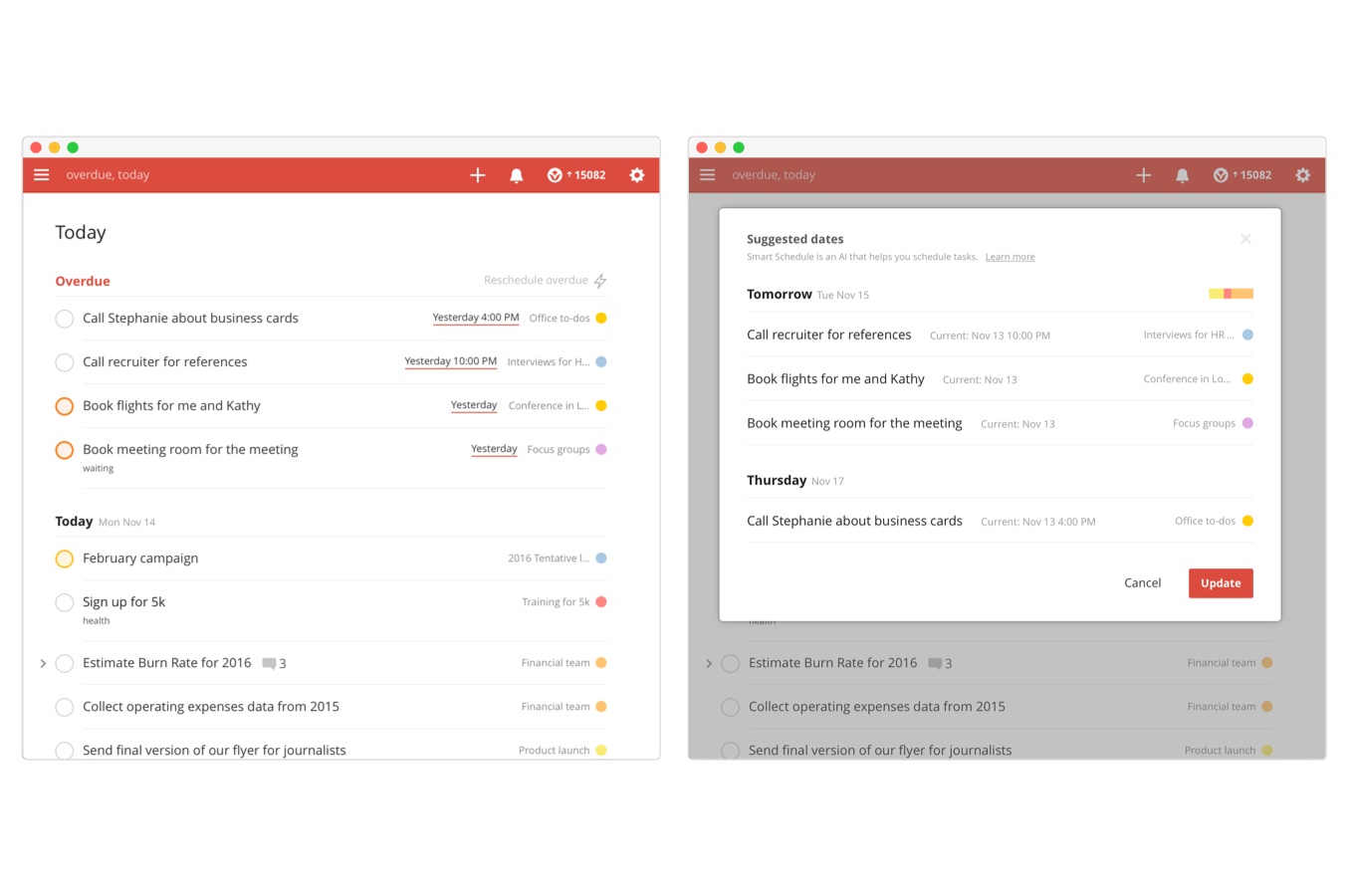 When Todoist’s data scientist Oleg Shidlowsky and his team started looking at aggregate task data earlier this year, they discovered an interesting pattern: despite tools to assign due dates and good intentions, most people tend to accumulate incomplete tasks and defer them indefinitely.

The result is a task manager overflowing with rescheduled tasks that not only defeat the entire purpose of GTD (or any other system) – they’re never going to be taken care of because their snowball effect lacks an action plan. You’ve probably done this with your tasks and emails, too: you keep snoozing and deferring some of them because you feel like you don’t have the time or patience to deal with them now. But is there ever a good time?

Instead of reinventing the way due dates and scheduling options should be presented – something that, admittedly, Todoist already does quite well thanks to its natural language support – the company is launching Smart Schedule, a feature powered by AI that wants to help users catch up on their todo list and regain control of overdue tasks.

The goal is simple, yet promising: Todoist is betting on algorithms to understand what’s most important to us and where we can find the time to get everything done without overcommitting to unrealistic deadlines.

Smart Schedule is a complementary scheduling feature that works with overdue tasks and tasks that haven’t been scheduled yet. On both the web and iOS, Smart Schedule is a button at the top of your todo list that opens a screen where you can reschedule tasks en masse with just one tap. 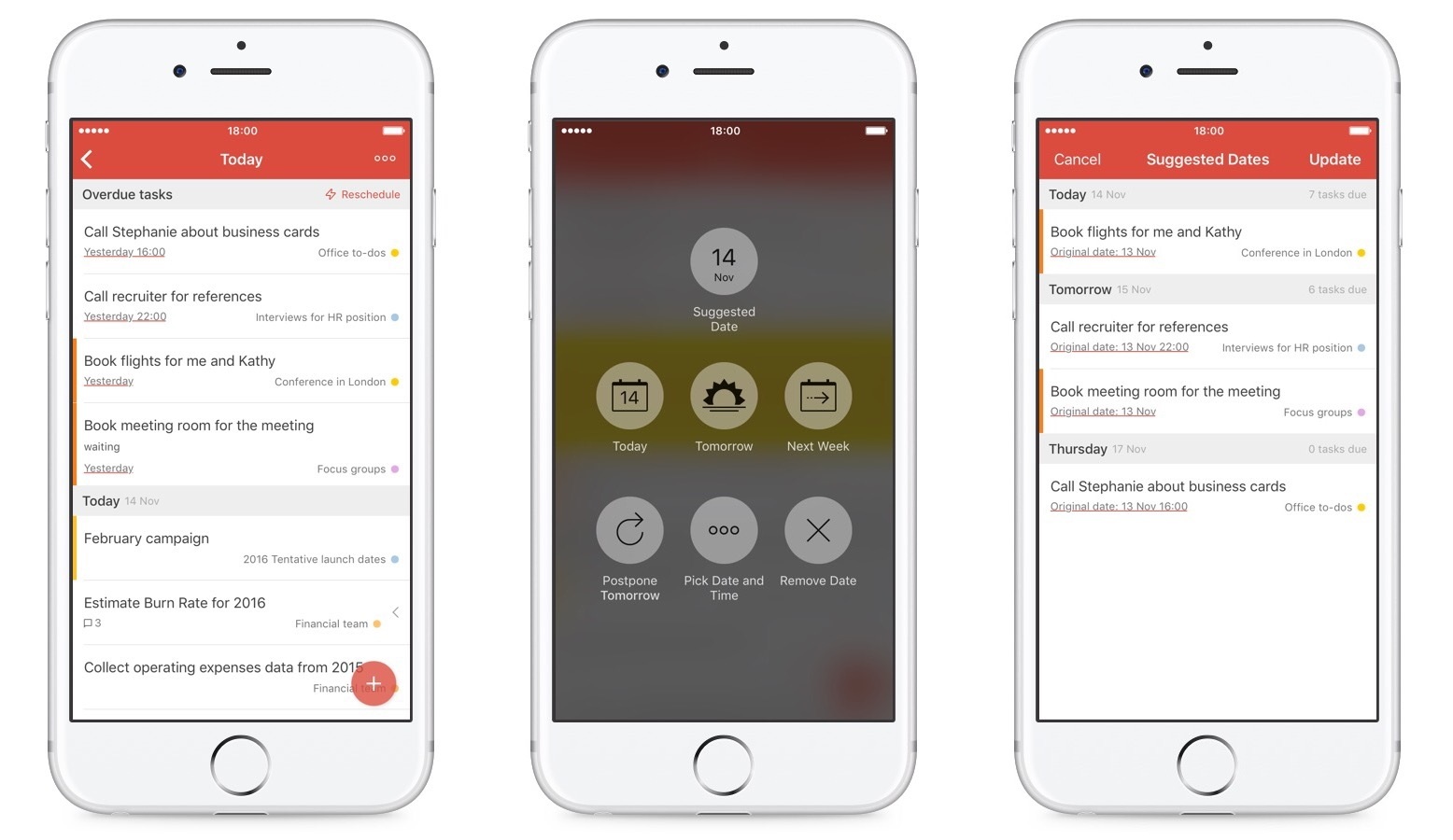 Behind the scenes, what Smart Schedule does isn’t a basic reshuffling of tasks by a few days into the future. The whole point of Smart Schedule, in fact, is to find dates that make the most sense for your habits and for the importance of each task.

According to Todoist, this was accomplished using deep learning in a few ways. First, Smart Schedule’s algorithms take into account a user’s history and what they’re most likely to complete on a specific day. If a user tends to assign tasks with “Rent movie” to Fridays, that day will be suggested for similar tasks. However, the urgency of a task is also determined by an analysis of all tasks across the Todoist userbase: if Smart Schedule thinks that “fix bug” and “pay bills” are more important than “download PlayStation game” or “watch Harry Potter”, then those tasks will be prioritized. 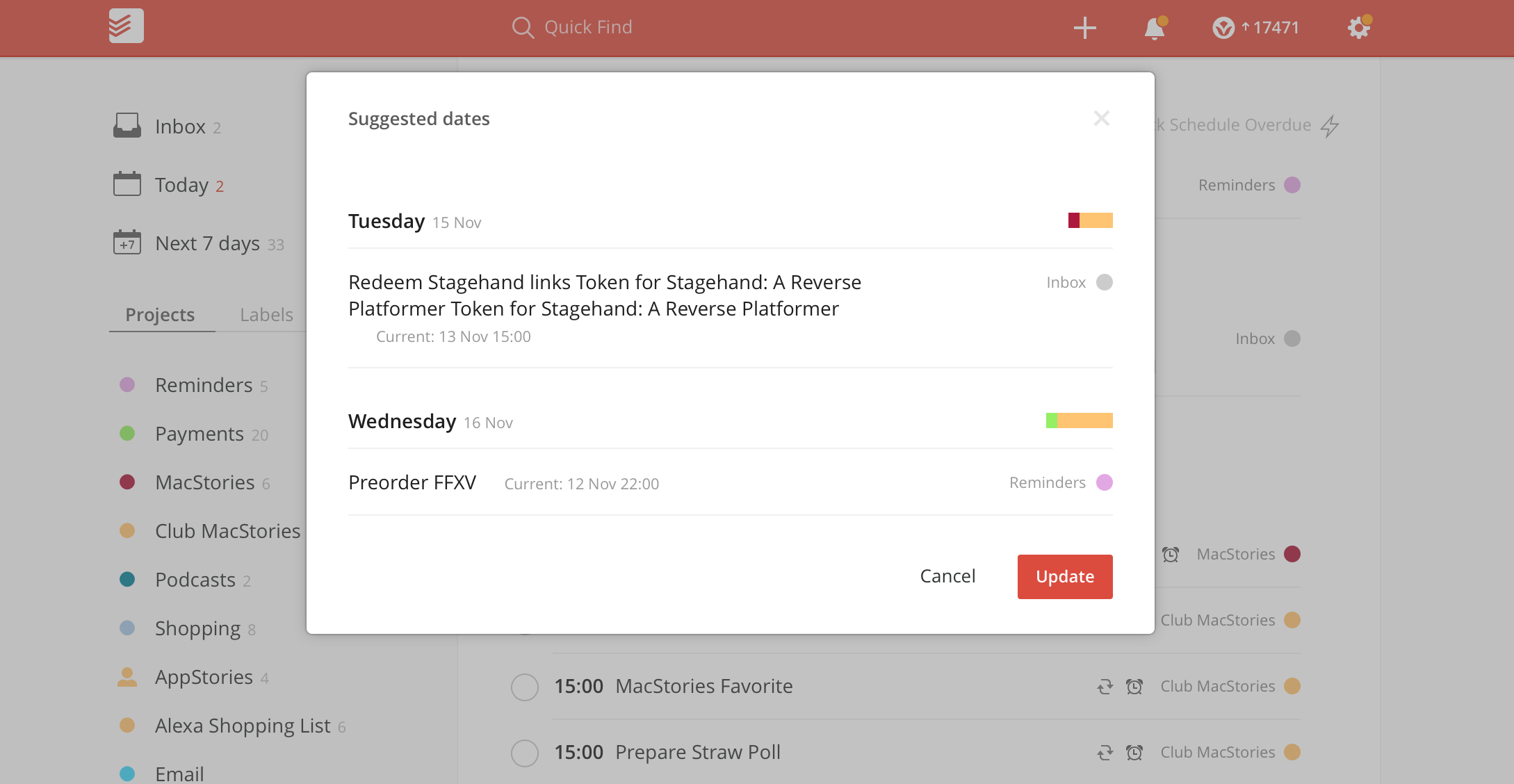 Smart Schedule doesn’t stop at estimating a task’s importance based on individual and aggregate patterns. Perhaps more impressively, the company says Smart Schedule is able to distribute overdue tasks evenly across multiple days based on a user’s upcoming task load while also guessing which tasks can be completed on weekdays or weekends, what a user’s “end of day” should be based on past behavior, and when a task should be scheduled to meet a user’s weekly and daily goals.

Finally, as other implementations of deep learning we’ve seen in modern web services, Smart Schedule is poised to get smarter over time as you use Todoist and create a larger pool of habits and patterns to feed the engine’s assumptions and analysis.

I’ve been able to test Smart Schedule with my Todoist account for the past couple of weeks. While Smart Schedule didn’t always pick the exact time I had in mind for an overdue task (according to Amir Salihefendic, CEO of Todoist, the “current implementation isn’t super impressive” as they lack a lot of optimizations and data based on real usage), I believe it has the potential to help people who have massive collections of overdue and incomplete tasks in their accounts. 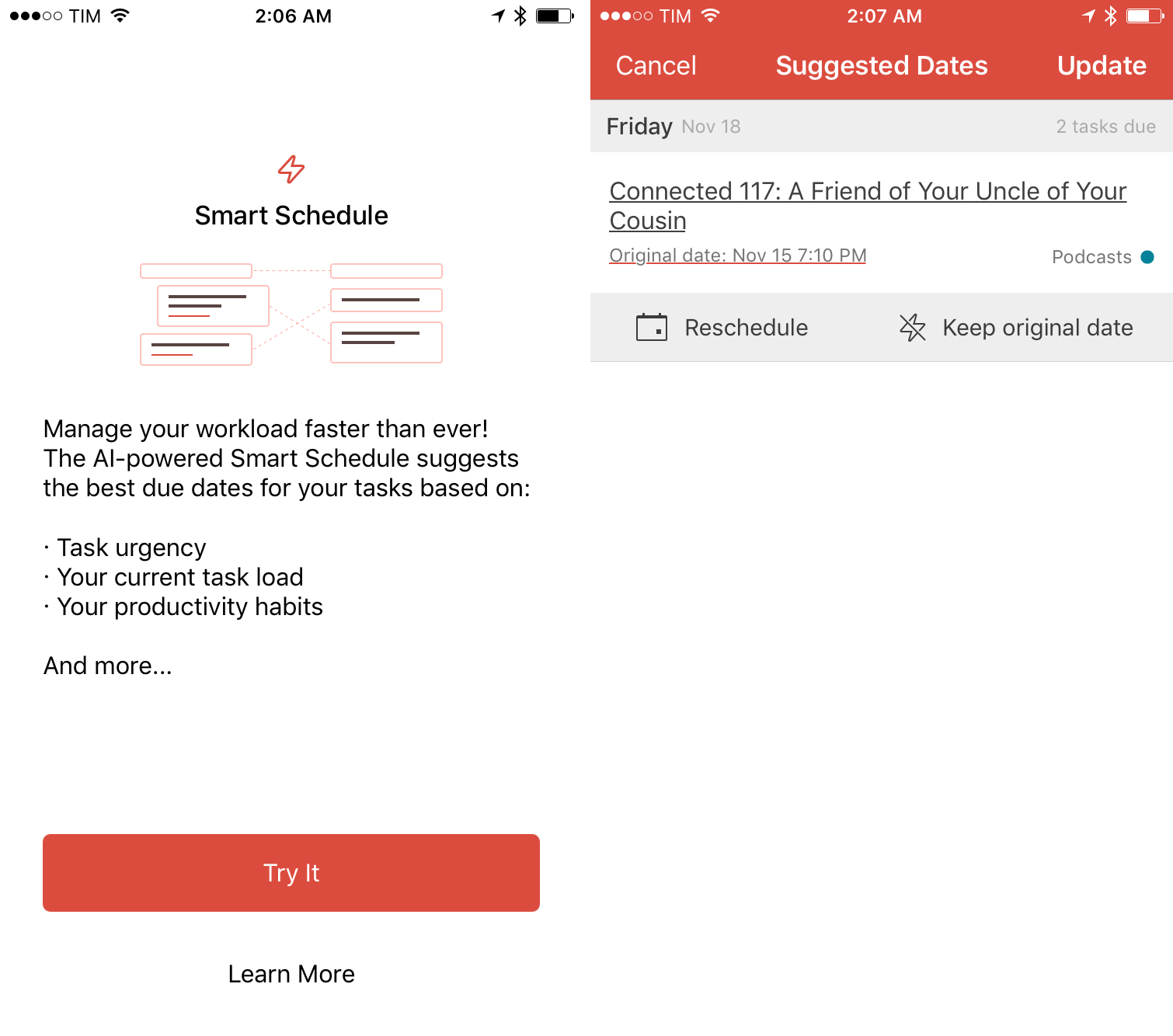 I don’t think I’m the kind of user Smart Schedule was built for: Todoist says that “a significant portion” of their users reschedules up to 70 tasks day after day; at that scale, any task manager becomes an ineffective tool to manage responsibilities and due dates. I tend to be extremely religious about my daily todo list and I avoid having more than 15 items each day because I know I won’t be able to sort through them all. Smart Schedule was built for the task hoarders with dozens of overdue tasks that are stuck on a defer loop; I think those users will appreciate Smart Schedule’s approach and how it redistributes tasks intelligently.

Smart Schedule is a first step from Todoist. When you consider the amount of habits that could be analyzed (Todoist has 9 million users and it’s available in 17 different languages on 10+ platforms), it seems obvious that, eventually, there will be an assistant to help you plan the entire week ahead rather than just rescheduling overdue items.

Salihefendic tells me that they’re “investing a lot” to augment Todoist with AI features – a growing trend among a variety of companies these days, including Apple. He’s thinking about how AI could be used in combination with Todoist’s Alexa and Google Home integrations, or how AI features could look at data from the over 50 services that connect with Todoist and provide a hub for “important stuff” you should work on. “We could use AI to help people plan better”, Salihefendic adds. “For example, if you add a “Run a marathon” task, the AI could warn you that this task isn’t very precise and the likelihood of you failing is high”.

I wouldn’t be surprised to see a slew of AI-based features from Todoist in 2017. Today, the company is starting with Smart Schedule and overdue tasks, but it feels like AI could reimagine the very essence of our todo lists in the near future.