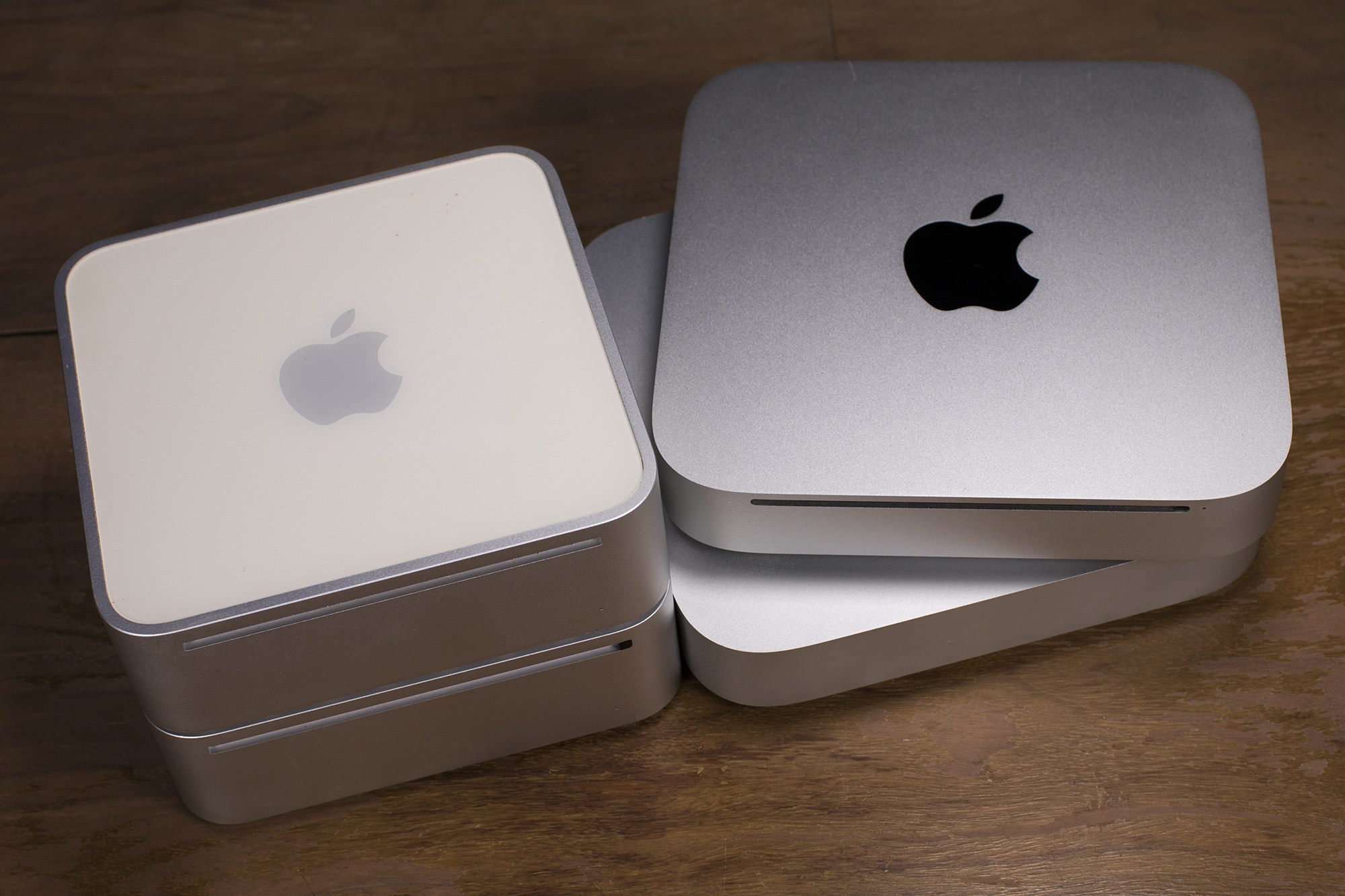 “The Mac mini is BYODKM,” Steve Jobs said, in front of a crowded and slightly confused audience at Macworld 2005.

“Bring your own display, keyboard and mouse,” he continued. “We supply the computer, you supply the rest.”

The Mac mini was designed to lure switchers to the platform. A new customer could simply unplug their desktop PC and hook a new Mac mini up to their existing peripherals.1

The original machine started at just $499, making the Mac mini the lowest-cost Mac Apple has ever sold.

For some long-time fans, the Mac mini brought back memories of the Macintosh LC, Apple’s low-cost Mac in the early 1990s. While totally adorable, the LC was hamstrung to hit a price point, something that Apple managed to avoid with the Mac mini, at least at first. The Mac mini was slower than other desktop Macs at the time, but I thought the compromises made were perfectly fair. 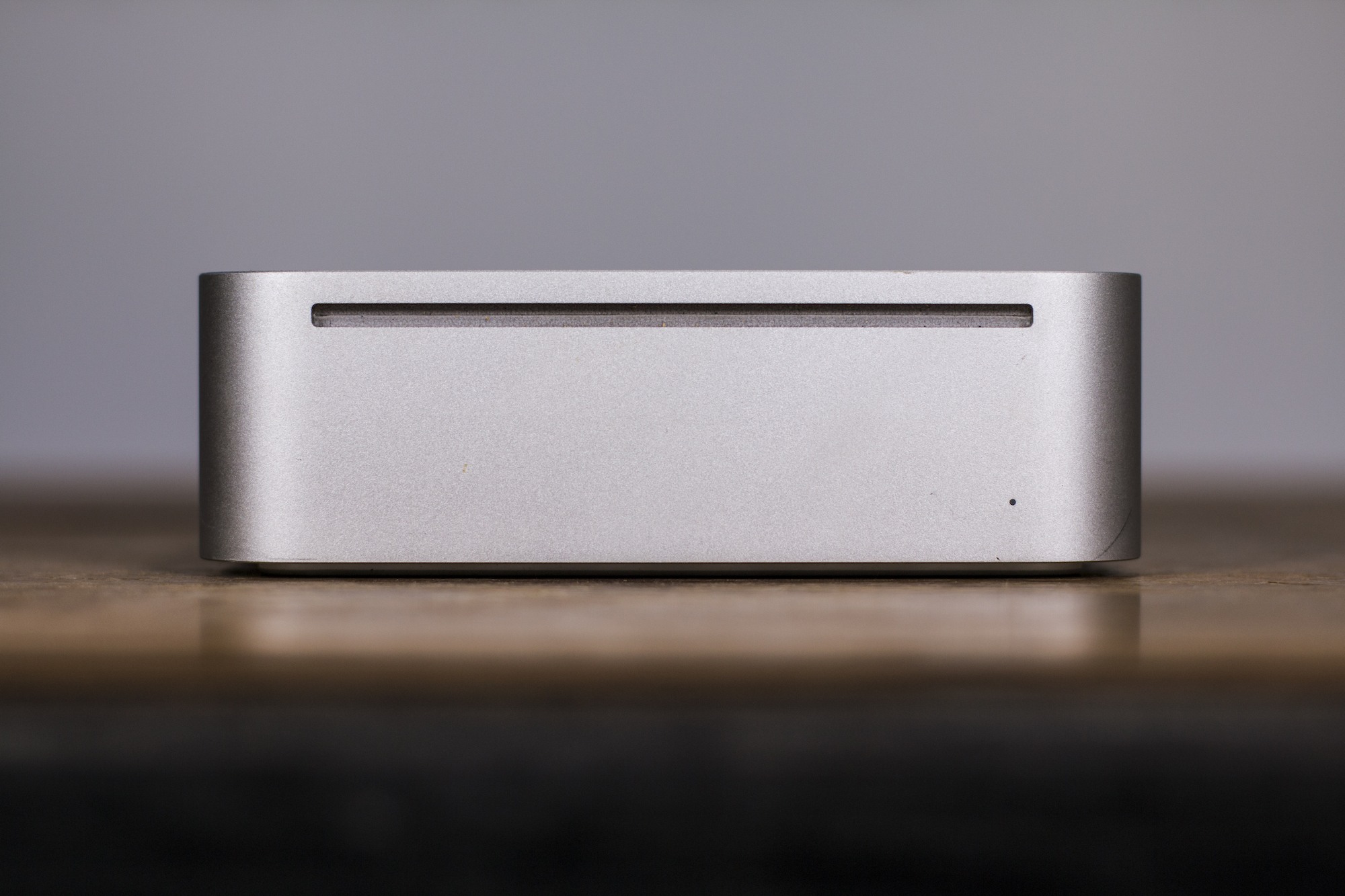 Introduced in 2005, the Mac mini was unlike anything else Apple was selling at the time.

The original Mac mini was powered by a 1.25 or 1.42 GHz G4 processor, came with a slow 4200 RPM hard drive and just 256 MB of RAM installed. Both initial models came with a Combo optical drive that could read DVDs and burn CDs. All of this was packed into a computer just 2 inches tall and 6.5 inches wide and deep.

At this point the iMac and Power Mac were both sporting G5 processors, but the Mac mini’s reduced specs helped Apple hit that amazing price point.

While I believe many switchers did purchase a Mac mini as their entrance into the Mac OS X ecosystem, the small computer soon garnered a large fan base.

People started buying them as servers. They showed up in cars and alongside DVD players in home entertainment setups.

In September 2005, Apple silently revved the Mac mini to include a faster hard drive and CPU. The high-end model got a better GPU and a nicer SuperDrive.

The Move to Intel

Like the iMac, the Mac mini’s move to Intel did not involve a radical redesign. Apple kept the case design intact, while adding two additional USB ports, audio in, Gigabit Ethernet and an infrared port for using the Apple Remote with Front Row. 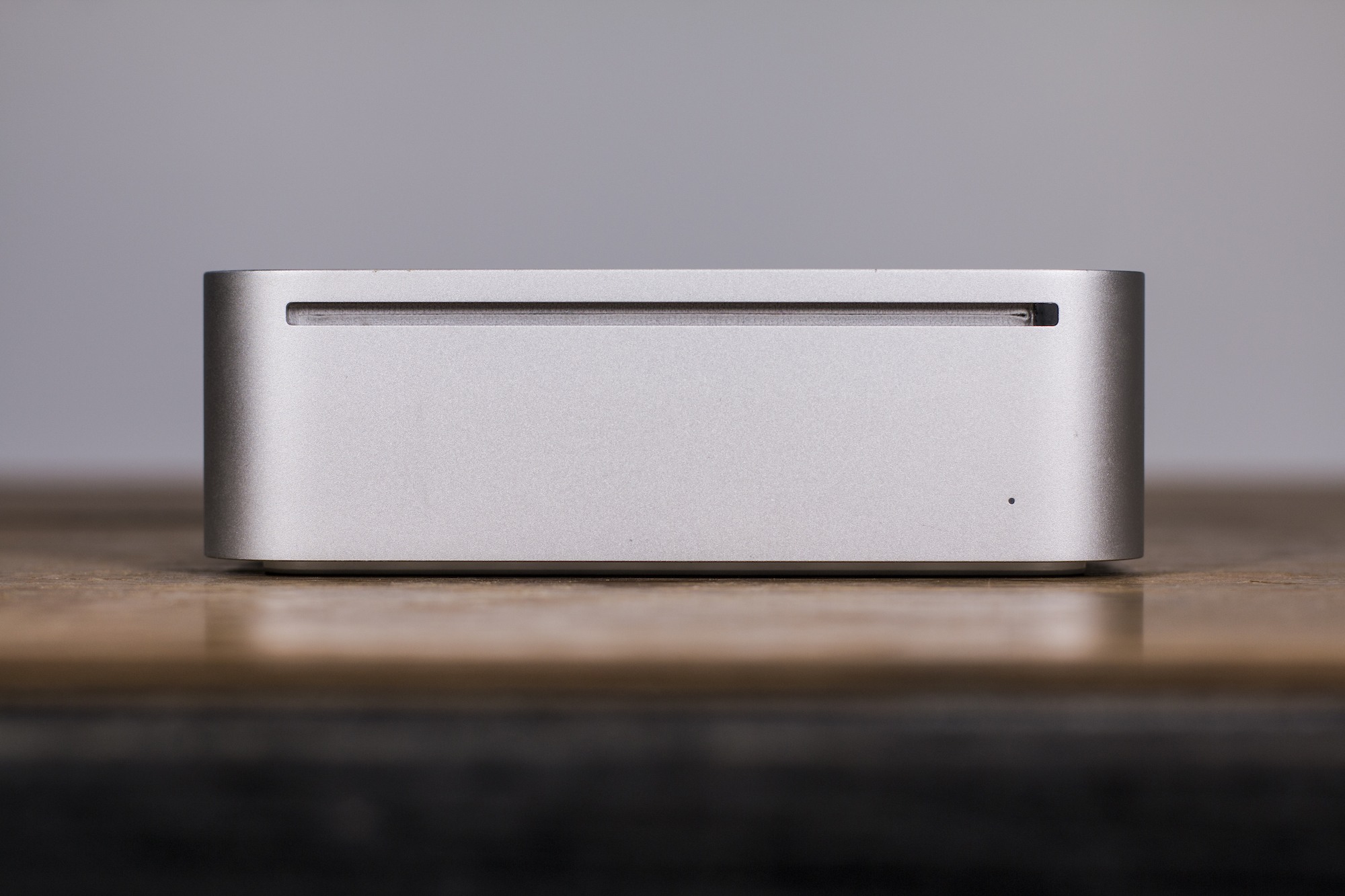 That small black plastic at the right of the optical drive opening? That’s the infrared port.

All of these improvements came with an increase in price. The base model, which is the only Mac to have ever shipped with the Intel Core Solo processor, was $599. The high-end model, with a SuperDrive, Core duo CPU and a larger hard drive was $799.

The Mini’s industrial design would remain in place for several more generations. The Late 2006 model brought a CPU speed bump, while the Mid 2007 machines came with 1 GB of RAM, larger hard drives and the Core 2 Duo processor.

The Mid 2007 model was on sale for 19 months, leading many to worry that the Mac mini was going to be discontinued by Apple.2

In October 2009, Apple introduced a $999 Mac mini that was unlike all other models before it:

To accommodate the second drive, Apple removed the optical drive, leading to a one-off case that looks rather funny today.

I think this model shows that Apple had noticed how people were using the Mac mini by this point in the product’s life. The machine’s low price, small form factor and near-silent operation had made it an attractive option for users who needed a server in their home or office.

In the summer of 2010, Apple released a new Mac mini with an all-new design, carved out of a single slab of aluminum. It was shorter and packed a slightly-larger footprint, at 1.5 inches tall and 7.7 inches wide and deep. It’s kind of like the original design got squished a bit. 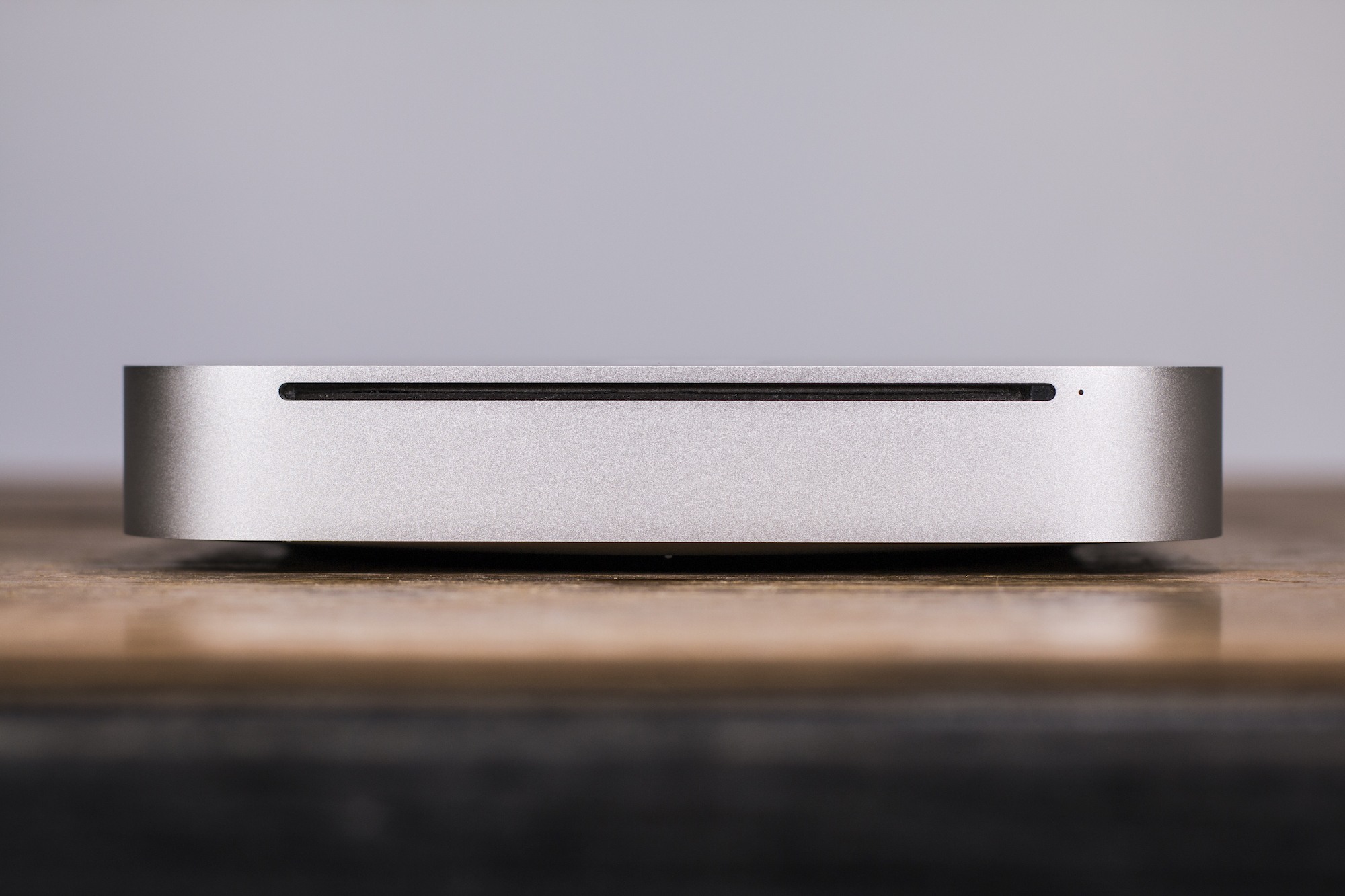 The Mid-2010 Mac mini is the only one that featured the unibody design and an optical drive.

While upgrading the previous models meant taking a putty knife to the case, the new design included a plastic bottom panel that could be removed with a simple twist. Upgrading the RAM had never been easier. Bolder customers could replace the hard drive, but it wasn’t technically a user-serviceable part.

Around back, the Mini picked an HDMI port3 as well as an SD card slot. While a separate server model remained, the mainstream Mac mini for 2010 was now $699.

A year later, the Mid 2011 Mac mini brought Thunderbolt, and the removal of the optical drive. Apple brought back the $599 model, and a year later in 2012, the separate Server edition was quietly discounted. 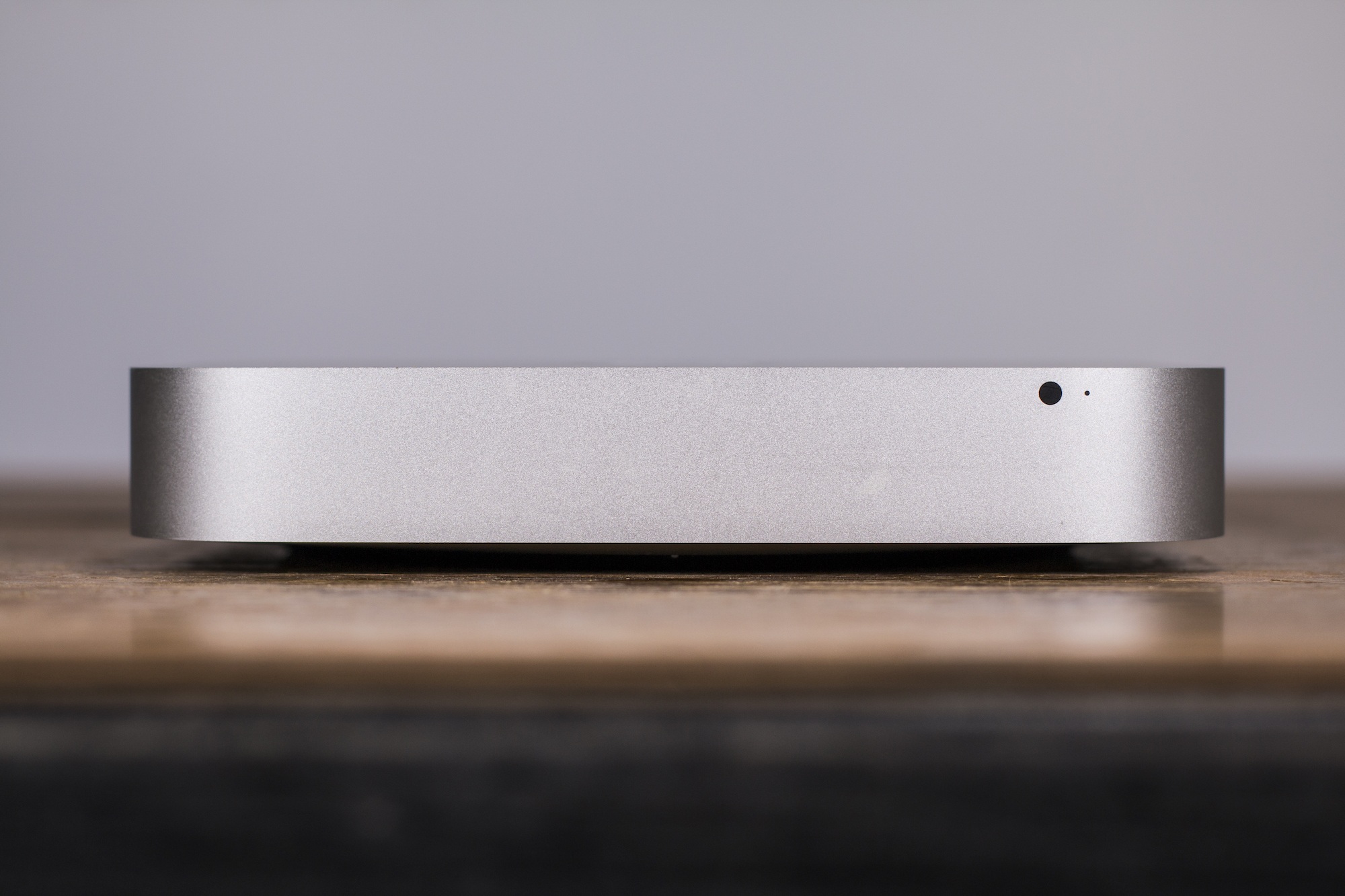 Currently, the Late 2014 Mac mini is the newest model available. While it may look like the 2011 and 2012 machines, Apple made several changes that have made its smallest Mac noticeably worse:

The only good things I can really say about the 2014 models is that Apple was able to bring back the $499 SKU, and that the value of 2011 and 2012 machines is still quite high. Customers who want more flexible machines are willing to spend good money on older machines to have access to things that Apple has taken away.

The Future of the Mac mini

I have two Mid-2011 Mac minis in active duty. The first sits under my television. It handles file sharing for my Drobo, hosts the family iTunes library and acts as a DVD player, thanks to a USB SuperDrive.

The second is a quad-core model at MacStadium, on which I run the streaming software used for Relay FM’s live shows.

Both machines have SSDs and are stuffed full of RAM. Both run amazingly well; it’s hard to tell that they are each six years old. I know that at some point, I won’t be able to install the newest version of macOS on them.

That’s a problem. I shouldn’t have to rely on a machine from 2011 to provide critical tasks for my business, but I do. Buying a new Mac mini just isn’t worth it for me. Upgrading would mean going back to a dual-core system, and to match the SSD and RAM I have in them would mean dropping $1,399 at the Apple Store.

I’d love to see Apple take the Mac mini and breathe new life into it. The design is a holdover from the days of the optical drive; a theoretical future Mac mini could be much smaller.

As cool as that could be, what I really want is for the Mac mini to be returned to its former glory, as the cheap-but-super-upgradable Mac it once was. Spending even $700 or $800 on a machine and spreading out the upgrade costs is far preferable to many users than spending twice that all at once.

From its humble beginnings as the BYODKM Mac to its role as a server, the Mac mini has been a faithful workhorse for 12 years now. It deserves another chance.