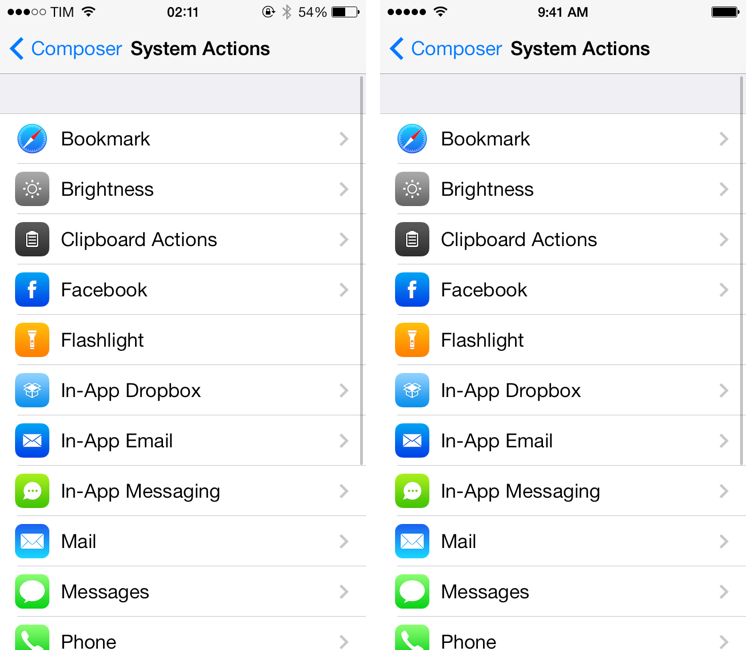 I don’t like screenshots of iOS apps that show status bars cluttered with icons for carriers and Bluetooth, or, worse, red battery indicators. While it’s generally not the most important aspect of an app review, I do think that using screenshots of iPhone and iPad apps with clean status bars shows a level of care that extends beyond the written text. For app developers who only have a few slots for screenshots in iTunes, screenshots that don’t have poor cellular reception and rotation lock or Bluetooth icons are essential for a non-sloppy, professional, thoughtful presentation of their product. It’s a little thing, but I care about it.

Fortunately, other people care about this minor aspect of iOS apps as well. Created by Shiny Development, Status Magic is one of my must-have Mac apps because it solves the status bar problem with ease and a good feature set: once you have the screenshots you need to “clean up”, you can drop them into Status Magic, tweak some options, and export the cleaned up, more professional-looking screenshots with status bar that don’t have six icons in them.

Here’s how I described the app in my review last year:

Status Magic lets you replace the status bar in a screenshot with a clean one in just two clicks. It can apply clean status bars to multiple screenshots at once, and it works with the latest Apple devices such as the iPhone 5 and Retina iPad.

To do batch processing of screenshots – which is what I’m after – simply drag the screenshots onto Status Magic’s bottom panel; you can drag items from the Finder, a Mail message, and even directly from iPhoto’s Photo Stream. You can then select a file in Status Magic to see a preview of the “new” status bar, or hit the gear icon to adjust how the status bar should be generated.

Status Magic comes with various settings for Status Bar Style, Connectivity, Show Time, Location, Bluetooth, and Battery – the icons that, combined, can usually clutter up the status bar in a screenshot.

Status Magic has been recently updated with support for iOS 7 status bars and, in particular, with an “opaque fill setting” in version 1.9. The app supports the new signal dots and status bar icons of iOS 7, allowing you to enable any other system item such as the location or VPN indicators – something that was possible in older versions of the app as well. 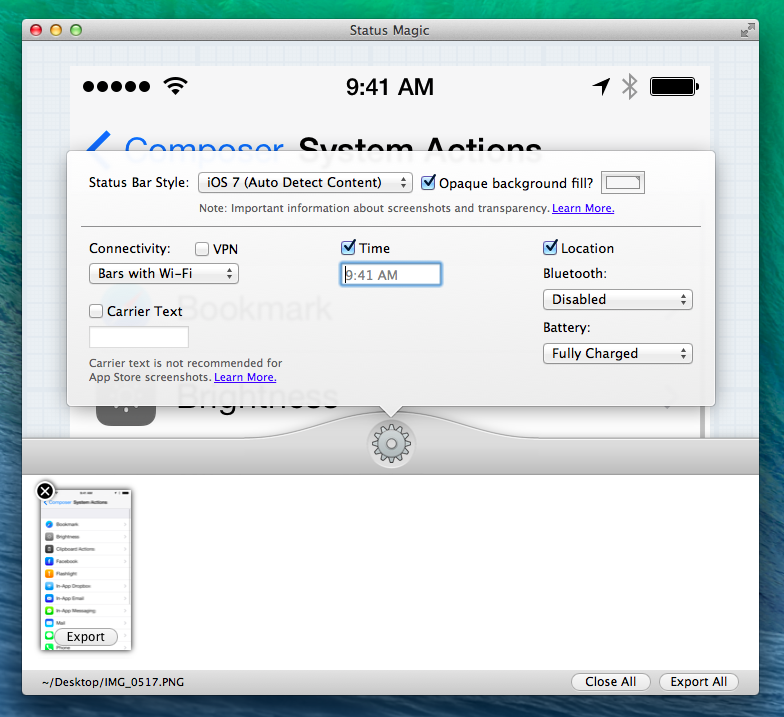 While the app comes with new options to automatically detect dark and light content, I found those to be less useful than the new opaque fill, which works best for apps that implement a flat, non-blurred, solid color tint in the iOS 7 status bar. To use it, click the color preview in the screenshot settings, then click the picker (magnifying glass icon) to choose a color, grab a color from a screenshot’s title bar, and you’ll see how Status Magic will override the existing status bar with a cleaner one that integrates perfectly with the color you picked from the screenshot (the top image in this post was generated with this technique). This has worked well for apps that don’t implement blurring or transparencies in the status bar, and I’ve been using the feature for my iOS 7 app reviews lately.

iOS 7 introduced changes to the system status bar that won’t make some apps work with Status Magic anymore. There’s little Shiny Development can do about this but, fortunately, I have found more apps that use color-filled, solid status bars than blurred or transparent ones. For that kind of status bars, Status Magic’s opaque fill setting has worked reliably for me, and I’ve been using the app every day to clean up my status bars because, honestly, that’s the right thing to do.

I recommend Status Magic if you’re an app developer or write about apps on a daily basis. The app is $6.99 on the Mac App Store.