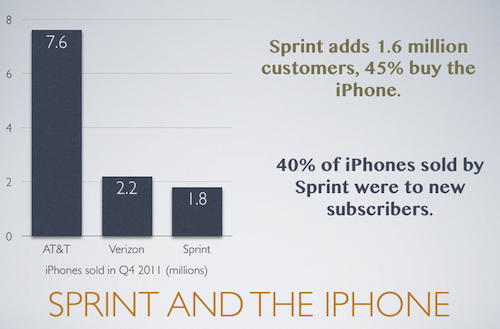 Sprint has just announced their Q4 2011 financial results, revealing that they sold 1.8 million iPhones. 40% of those iPhones sold were to new Sprint customers, a high percentage and one that was needed for Sprint. After continued losses, Sprint needed to add more customers to its network and in Q4 it achieved 1.6 million new users - meaning 45% of those new subscribers signed up with an iPhone.

View the full Sprint press release after the break.

Quarterly year-over-year Sprint platform postpaid ARPU growth of $3.69 is the best on record in the industry
Largest sequential increase in net operating revenues in more than five years
Sprint serves more than 55 million customers – highest level ever
1.6 million total net subscriber additions in the quarter – best since 2005
539,000 postpaid net additions on the Sprint platform in the quarter
Strong iPhone sales – 40 percent to new customers
Network Vision on schedule and on budget; six major cities to launch 4G LTE by mid-year with the addition of Kansas City and Baltimore
Adjusted OIBDA* of $842 million and the first year of Operating Income since 2006

The company reported total net subscriber additions of 1.6 million during the fourth quarter of 2011 – the best quarterly result in six years – bringing total ending subscribers to the highest level in the company’s history. Total postpaid net additions of 161,000 for the fourth quarter represent the tenth consecutive quarter of year-over-year improvement and were driven by continued strength of the Sprint platform, which had net postpaid additions of 539,000. This is the seventh consecutive quarter of net postpaid subscriber growth on the Sprint platform.

“Our strong fourth quarter performance illustrates the power of matching iconic devices like the iPhone with our simple, unlimited plans and industry-leading customer experience,” said Dan Hesse, Sprint CEO. “During the past year, Sprint added more than 5 million net new customers and grew wireless service revenue by more than 5 percent, including 17 percent for the Sprint platform. This momentum gives us confidence as we execute our Network Vision upgrade and 4G LTE roll-out.”

The company continued to rapidly grow the number of prepaid and wholesale and affiliate subscribers in the fourth quarter. Prepaid net additions were 507,000 bringing total prepaid subscribers to nearly 14.8 million at the end of 2011, an increase of 20 percent since the end of 2010. Net additions of 954,000 for wholesale and affiliates in the fourth quarter were the highest in seven years.

Additionally, the company reported a net loss of $1.3 billion and a diluted loss of $.43 per share for the quarter, which includes pre-tax, non-cash charges of $241 million, or $.08 per share, consisting of asset and impairment charges of $78 million on property, plant and equipment, $135 million on Sprint’s investment in Clearwire and $28 million in severance costs.

Sprint’s Network Vision initiative remains on schedule and on budget. In the fourth quarter, the company completed field integration testing and launched the first multi-mode base station and first cluster of cell sites, validating improved 3G data performance metrics, such as voice quality, call drops and blocks and improved data speeds. The company expects to bring approximately 12,000 sites on air by the end of 2012 and to complete the majority of its Network Vision roll-out in 2013. In addition, as part of Network Vision Sprint has announced it expects to begin launching 4G LTE by mid-year 2012. In addition to Houston, Dallas, San Antonio and Atlanta, Sprint today announced Kansas City and Baltimore will be among the initial six major cities to launch.

The company also raised a substantial portion of the additional cash needed to fund the Network Vision deployment, debt maturities and working capital requirements over the next few years. During the fourth quarter, Sprint raised additional financing of $4 billion and repaid all 2012 maturities prior to scheduled maturity. Sprint’s next scheduled debt maturities include $300 million due in May 2013 and $1.5 billion due in October 2013.

Sprint generated $257 million of Free Cash Flow* in the quarter. As of Dec. 31, 2011, the company’s total liquidity was approximately $6.7 billion, consisting of $5.6 billion in cash, cash equivalents and short-term investments and $1.1 billion of undrawn borrowing capacity available under its revolving bank credit facility.